The True Face of the Trump Administration

Colbie Holderness’s black eye confronts us with the underside of this White House. 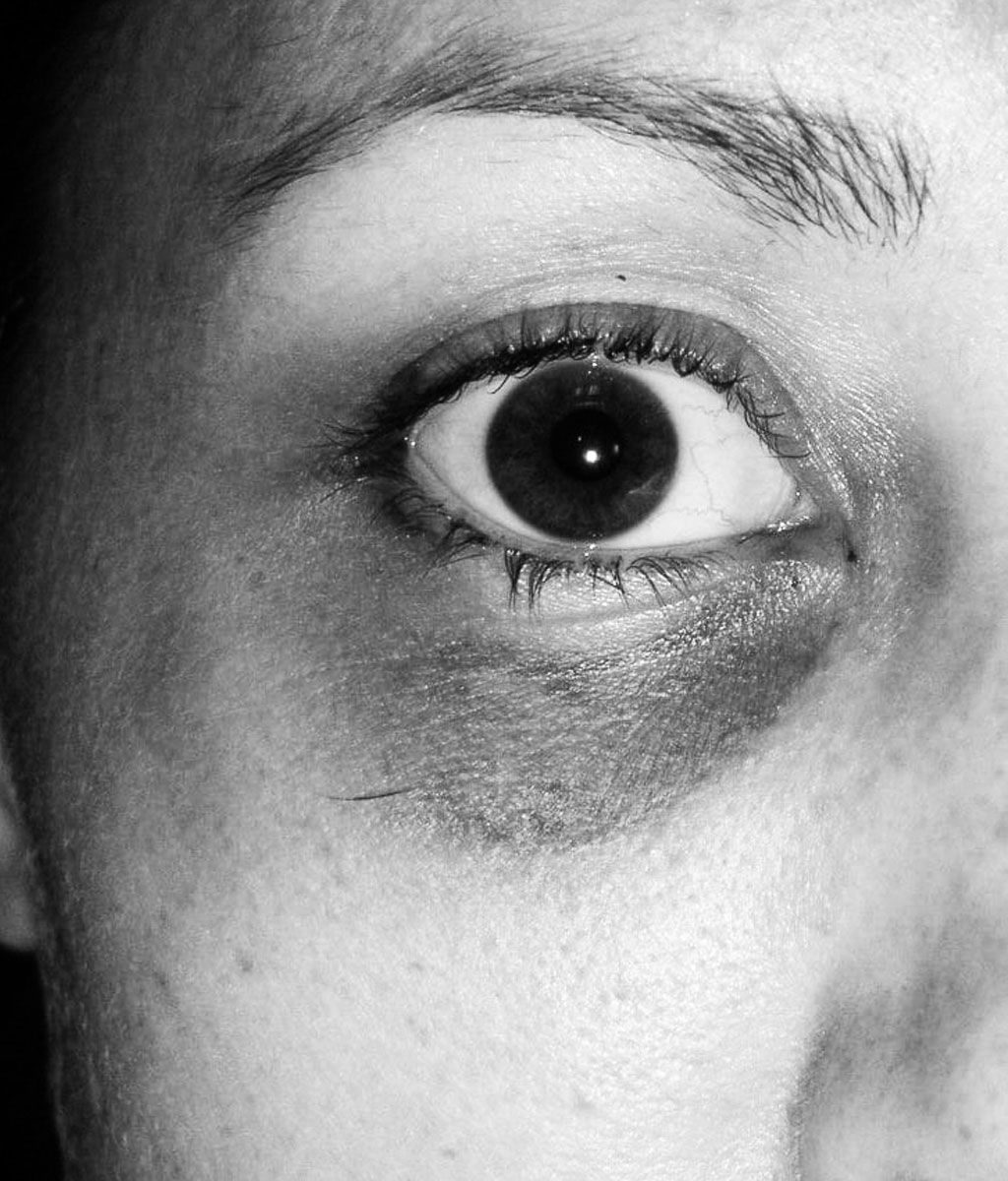 Once again, an image of a woman screams out to us of unspoken realities in the Trump administration. This time, the message radiates from a close-up photograph of Colbie Holderness, the first of Rob Porter’s two abused ex-wives. This single, troubling photograph confronts us with the underside of this White House, a brutal, if inadvertent, revelation of its true face.

Like most of the women affiliated with the Trump White House, Holderness is young and lovely, but this photo differs strikingly from the kind we normally see of administration wives or female aides. We’re accustomed to seeing Melania, Ivanka, Hope Hicks, et al. perpetually in full (very full) hair and makeup, their femininity an artful fabrication of contour and highlighting, gloss and spray. Even the most down-home cast member, Sarah Huckabee Sanders, now delivers her nonsensical press briefings with her angry eyes weighed down by batwing-sized false lashes.

But in Colbie Holderness’s photograph, taken during a 2005 trip with her husband to Florence, she is completely unembellished. Her hair is pulled back; she wears no makeup, and with her perfectly oval face, large luminous eyes, full lips, and gently sloped nose, she resembles a Renaissance Madonna from a painting — like those she likely admired on her Italian vacation. At the same time, the picture is so unfiltered, so un-retouched, that we see how real and human its subject is: the subtle irregularities of skin, freckles, even the tiny marks on her nose, perhaps left by a pair of concealing sunglasses. It’s an intimate photo, taken — we now know — by an intimate partner, Porter himself.

The one shocking detail is the vivid, angry bruise that disrupts our gaze upon this beautiful face, just as the punch that caused it disrupted the delicate flesh. A half-moon of striated magenta encircles the lower half of Holderness’s eye, extending to the outer corner and up into the crease of the lid (much as contouring eye shadow would), all set within a halo of sickly yellow-green. The colors grant us a timeline, for this is the tail end of a black eye; the fist likely smashed into the young woman’s face several days before the photo was taken.

While the bruise startles and unsettles, it is Holderness’s gaze that arrests our attention. It feels as direct and unfiltered as the photograph itself. The subject holds her features in total repose; mouth closed, gaze level, and eyes fully open. Out from those eyes, though, comes the clear message directed at her assailant: “Do you see what you’ve done to me?”

Rob Porter has tried to temper the photo’s stark accusation: “I took the photos,” he wrote in a press release, “and the reality behind them is nowhere close to what is being described.” He does not deny he caused the injury, but instead claims artistic ownership of the image — “I took the photos” — suggesting that he holds a secret about them inaccessible to the general public. That he knows a deeper, private truth about that black eye, which would exculpate him if only he could share it with us.

But such a defense only redoubles the crime of domestic violence which, at its heart, consists of mistaking love for a person with ownership of a thing, and of using the privacy of the domestic as cover for transgressions you’d never permit yourself in public. That he took those photos affords Porter not the slightest escape from blame here. On the contrary, his statement reveals his presumption, suggesting a belief that his “ownership” of the photos extends to his “ownership” of the situation depicted, and even to ownership of the woman herself. He is trying to invoke a kind of droit du seigneur, the husband’s mastery over the intimacy of his couple, and ultimately over the personhood of his wife. (That Porter apparently asked his second wife, Jennie Willoughby, to cover for him with the press, offers yet another example of his presumptuous attempts to dominate and control women with his “secrets.”)

But clearly, Porter was not wrong to expect his patriarchal persona to impress the Trump White House. While the details of his serial abuse were known to the FBI, to John Kelly, Donald McGahn, and others, Porter nevertheless ascended to the position of Staff Secretary, entrusted with highly classified materials. He was allowed, that is, to deal in secrets — despite (or perhaps — at some subliminal level — even as a result of) carrying such volatile secrets himself, secrets about how to keep women in their place. “That’s his private business,” we can imagine the higher-ups saying, a sentiment in keeping with the assumption that women exist for men’s private enjoyment, not to trouble their careers. (Porter wasn’t alone; a White House speechwriter resigned on Friday over abuse allegations.)

But as ever, the private seeps into the public. Not just because domestic violence should disqualify anyone from occupying a position as honorable and sensitive as staff secretary, but also because Porter has entangled himself romantically with a White House colleague, Hope Hicks — who has already been prevailed upon to keep his secrets, to help draft a saccharine press release about his sterling character.

Porter has now left the White House, but that means little. His departure does nothing to undo the toxic, misogynist climate that permitted his hire in the first place and accounts for the disgraceful delay in acknowledging his past. And while yes, it is a “private” matter, we cannot help worrying about Hope Hicks’s personal life — is she in danger? Beneath her careful makeup, will there someday be an ugly purple bruise?

We must also consider this photo in its larger context. Virtually every image of White House–affiliated women — whether filmed or still — showcases their high-level, even excessive theatricality, their stage-worthy grooming. But for all their paint and polish, once onstage, these women have painfully little to say. We know next to nothing of their opinions; we can barely hear their voices. Even Ivanka — putative “presidential adviser” — seems blankly empty. And for all her talking, “spokesperson” Sanders does nothing but parrot administration denials or deflections, never offering the slightest degree of illumination (or truth). It’s as if female self-expression is inversely related to the degree of cosmetic enhancement.

And then suddenly, a woman’s dramatically bare visage commands the stage, speaking loudly and clearly, not only its painful private truth, but a public, even global one. Colbie Holderness’s battered face makes visible to the world — literalizes — the violence deemed acceptable by the Trump administration, the secret ugliness of its lack of empathy — for women certainly, but also for people of color, immigrants, the poor, the middle class, our global allies, and pretty much anyone not within its immediate, tiny, gilded purview.

Each day of this presidency can feel like an assault, and now there’s a picture that succinctly expresses that feeling. Those highly embellished images of Trump’s cadre of women often convey a sense of unease, a feeling of something unpleasant being suppressed, beaten back by all the glamour. Holderness’s photo suggests the reason for our discomfort: Lurking beneath all the luster of those women, and by extension, beneath all the luster of Trump’s entire gaudy world, has always been an ugly wound, the imprint of a violent and careless fist. It hurts to look at Colbie Holderness’s face, but look we must. Her face is our face.

+Comments Leave a Comment
The True Face of the Trump Administration
life after roe 4:24 p.m.
Rage, Fear, and Hope Outside the Supreme Court “We understand that poor women and women that are Black and brown are going to pay the most for this repeal. That’s why we’re here.”
life after roe 6:00 a.m.
Scenes From Friday’s Abortion-Rights Protest Outside the Supreme Court “I deserve access to health care. My daughter deserves access to health care.”
By the Cut
life after roe 12:39 a.m.
‘Get in the Streets and Stay in the Streets!’ Abortion-rights protesters channel their rage in Washington Square Park.
By Sarah Jones
life after roe Yesterday at 7:01 p.m.
Overturning Roe Is Just the Beginning Conservatives are already floating a national abortion ban and the overthrow of other privacy-based rights.
self Yesterday at 6:36 p.m.
Eating Daily Harvest Lentil Crumbles Sent Them To The ER Daily Harvest customers describe the medical hell that followed eating French Lentil + Leek Crumbles.
abortion Yesterday at 6:00 p.m.
Celebrities, Activists, and Politicians React to the End of Roe The Supreme Court’s Dobbs decision has, as expected, overturned our constitutional right to abortion.
life after roe Yesterday at 5:30 p.m.
What to Know About Stocking Up on the Abortion Pill Even if you aren’t pregnant, some providers will let you buy the medication in advance.
life after roe Yesterday at 4:49 p.m.
God Help My Friendship With White Evangelicals After Dobbs Forced reproduction cannot mean anything other than slavery to Black women.
By Brittney Cooper
life after roe Yesterday at 3:58 p.m.
The Necessity of Hope Things are bad. They will get worse. But despair has never been an option.
By Rebecca Traister
life after roe Yesterday at 3:57 p.m.
With Roe Gone, This Abortion Clinic Is Running Out of Time “We were all just crying and angry. Then the phone rang and I had to make an appointment with a patient.”
life after roe Yesterday at 1:34 p.m.
How to Protest for Abortion Rights Following the SCOTUS Dobbs decision overturning Roe v. Wade, demonstrators are making their voices heard.
abortion Yesterday at 1:08 p.m.
The End of Abortion As We Knew It In a 6–3 decision, the Supreme Court has ruled to overturn Roe v. Wade.
By Irin Carmon
the internet Yesterday at 12:00 p.m.
Can a PDF Really Tell You If You’re Queer? Unpacking the complicated legacy — and history — of The Lesbian Masterdoc.
By Michelle Santiago Cortés
life after roe Yesterday at 11:16 a.m.
‘A Woman Has No Rights’: Read Liberals’ Supreme Court Abortion Dissent Justices Breyer, Sotomayor, and Kagan decried the abolition of Roe v. Wade in blistering language.
life after roe Yesterday at 10:55 a.m.
Find an Abortion An exhaustive guide to the clinics still open in each state, how to reach them, and the services they offer.
By the Cut
abortion Yesterday at 10:44 a.m.
Life After Roe Starts Now The Supreme Court decision ensures a health-care crisis that will ripple out across the country.
By Claire Lampen
power Yesterday at 10:30 a.m.
Donate to an Abortion Fund Right Now If you’re terrified about the overturning of Roe v. Wade, it’s the best thing you can do.
By Bridget Read and Claire Lampen
style Yesterday at 8:00 a.m.
The Rise of Fashion’s Tumblr Generation They found themselves, and each other, online.
keeping up with the royals June 23, 2022
Prince William and Kate Middleton’s Portrait Is Making Me Uncomfortable Sex and the City shoes included.
allegations June 23, 2022
All the Allegations Against Ezra Miller A man claims Miller is housing his young children and their mother in unsafe conditions.
More Stories