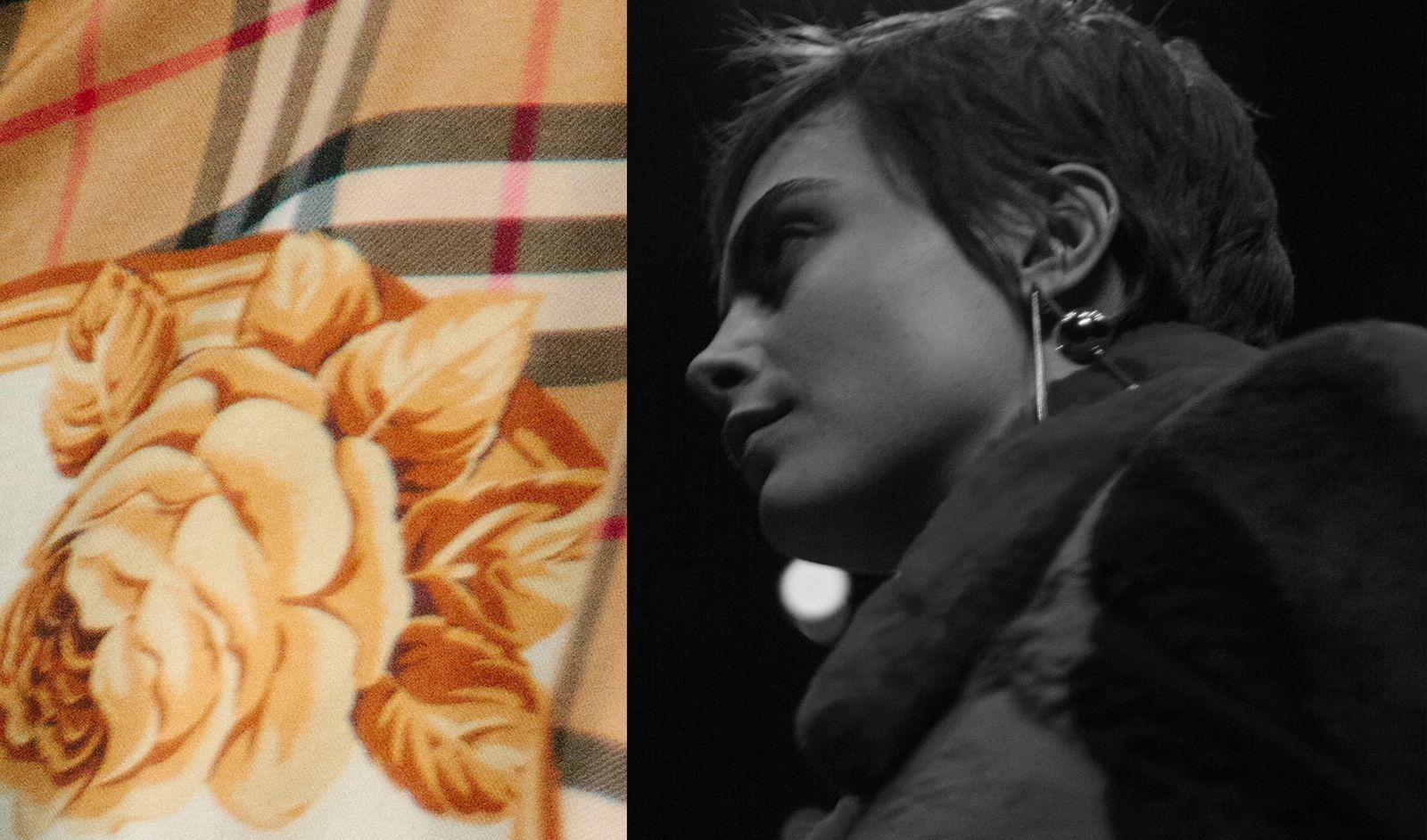 No one wanted to miss Christopher Bailey’s last Burberry show at London Fashion Week. Everyone from Chelsea Clinton to Alexa Chung to Zendaya sat in the audience and watched as Cara Delevingne marched down the the catwalk in a faux-fur Pride cape, models showed off Burberry’s signature tartan with a rainbow stripe, and Bailey kissed his partner at the very end. The show, which was dedicated to LGBTQ+ youth, was highly emotional.

From the makeup to its dedication, the show celebrated individuality. Wendy Rowe, the brand’s makeup artistic consultant, gave each of the show’s 84 models their own unique beauty look. While some had a bit of contour on the lip, others had highlighted cheekbones.

Everything from sneakers to capes to puffy vests were rainbow, a nod to the show’s dedication to LGBTQ+ youth. In addition to the sartorial support, Burberry announced before the show its plan to make donations to three organizations that support LGBTQ+ communities: the Albert Kennedy Trust, the Trevor Project, and ILGA. While Bailey will leave Burberry at the end of March, the initiatives will extend past his departure.

It was the perfect last show for Bailey, the current chief creative officer and president who has spent the past 17 years at the company. During his tenure, he proved that the brand had more to offer than its signature plaid and trench coats.

“It has been the great privilege of my working life to be at Burberry, working alongside and learning from such an extraordinary group of people over the last 17 years,” he said when he announced his departure. “Burberry encapsulates so much of what is great about Britain. As an organization, it is creative, innovative and outward looking.”

+Comments Leave a Comment
Scenes From Christopher Bailey’s Final Burberry Show
flirting? 1:13 p.m.
Cara Delevingne, Self-Appointed Hype Woman She wouldn’t leave Megan Thee Stallion alone at the BBMAs.
diy 1:00 p.m.
We Made Our Own Version of the Controversial $1,850 Balenciaga Sneakers We had $50, an old pair of Converse, and a sense of duty.
ask a boss 12:00 p.m.
‘Several of My Co-workers Were Fired. Am I Next?’ It’s possible your company fires people without warning, but it’s just as possible there were warnings you weren’t privy to.

health 10:15 a.m.
The Baby-Formula Shortage Keeps Getting Worse Anxious parents are navigating supply-chain issues, recalls, and rations.
breakout 8:00 a.m.
Meet Sally Rooney’s New Leading Lady Alison Oliver auditioned over Zoom. Next thing she knew, she was on set with Joe Alwyn.
celebrity 7:19 a.m.
How Many Weddings Are Kourtney and Travis Going to Have? Kravis got legally married over the weekend.
power Yesterday at 6:02 p.m.
The Normalization of White Male Violence What happened in Buffalo on Saturday is our nation’s natural state. Black anxiety is mine.
By Brittney Cooper
lawsuits Yesterday at 5:38 p.m.
Amber Heard Says She Thought Johnny Depp Would Kill Her Heard also testified that Depp sexually assaulted her with a liquor bottle during a brutal fight.
white supremacy Yesterday at 4:55 p.m.
What Is Replacement Theory? The 18-year-old gunman who opened fire on a Buffalo supermarket was apparently motivated by an old white-supremacist conspiracy.
do i need this Yesterday at 4:04 p.m.
Do You Need the ‘Windex of Skin Care’? The spray has taken up permanent residence in my overflowing beauty closet.
let's talk about breasts Yesterday at 3:35 p.m.
Suddenly I Need Gold Nipple Pasties Thanks to Doja Cat, of course.
fomo Yesterday at 3:29 p.m.
I’m Devastated I Wasn’t Invited to Chloë Sevigny’s Wedding Swan-shaped ice sculptures, mint-julep cups full of cigarettes, and Natasha Lyonne.
celebrity Yesterday at 1:43 p.m.
Kim Is Really Trying to Make Beach Gloves a Thing Kim Kardashian is on the 2022 Sports Illustrated “Swimsuit” issue wearing a nude bikini … and matching opera gloves?
parenting Yesterday at 1:10 p.m.
Formula Is a Lifeline The conversation around the shortage reveals how misunderstood formula feeding remains.
By Erica Schwiegershausen
celebrity Yesterday at 12:49 p.m.
I Really Don’t Need Any More Info About Megan Fox and MGK’s Sex Life This week, they apparently cut a hole in her jumpsuit to have sex.
brooding Yesterday at 12:00 p.m.
What Will It Take for Momfluencers to Speak Up About Abortion Rights? Mommy bloggers have the power to mobilize real political energy — but they rarely do.
celebrity Yesterday at 10:18 a.m.
Someone Sneaked a Phone Into Jesse Williams’s Broadway Debut Nudes from the show — leaked without the actor’s consent — are circulating on Twitter.
book excerpt Yesterday at 10:00 a.m.
How to Call the Whole Thing Off The day after breaking my fiancé’s heart, we attended his best friend’s wedding together. It didn’t go well.
By Alyssa Shelasky
encounter Yesterday at 8:00 a.m.
Would You Time Travel Back to Your Sweet 16? In Emma Straub’s latest, the novelist uses fantasy to revisit the past. It all happened in real life, too.
By Kate Dwyer
how i get it done Yesterday at 7:00 a.m.
How Frieze L.A. and New York Director Christine Messineo Gets It Done She’s the first person to oversee both art fairs and is currently gearing up for New York’s tenth edition.
By Liam Freeman
More Stories