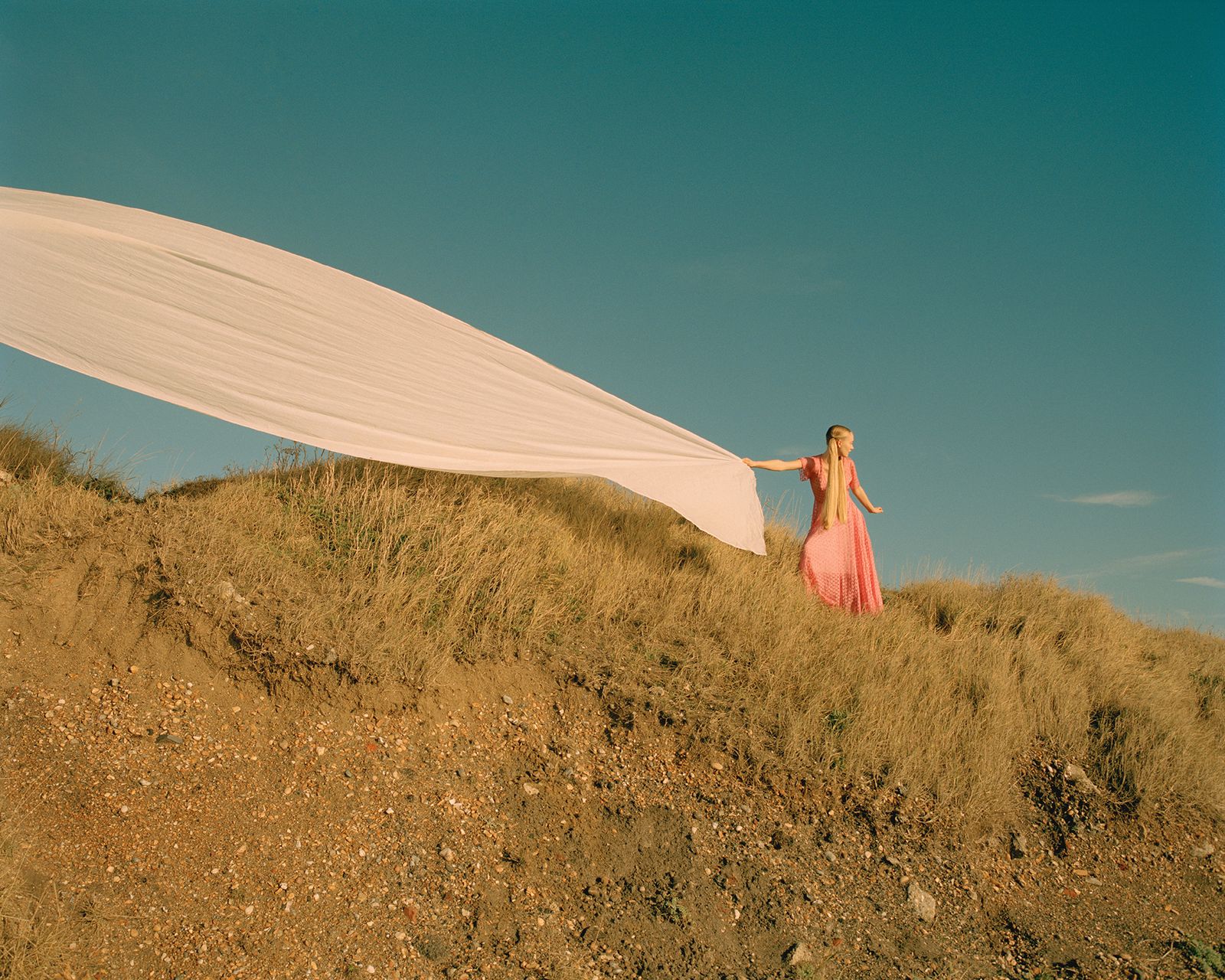 The season’s pastels and patterns at play on a scenic beach in England.

In his seaside hometown of Brighton, England, 27-year-old photographer James Perolls captured spring fashion’s most vivid colors in a whimsical style reminiscent of Alice in Wonderland.

With a box of our fashion editors’ favorite looks from the spring 2018 collections, Perolls had the freedom to photograph the clothing however he pleased. Model Elizabeth Yeoman wears a red leather Calvin Klein coat and billowy dresses by Adam Selman, Balenciaga, and more designers, standing on the same rocky beach where Perolls grew up playing with his father’s camera.

“A lot of the editorial work I create tends to revolve around the idea of an imaginary world with stories of adventure and exploration,” he says. “There is often a sense of innocence and magic with some slightly dark or humorous undertones. I like to arrange characters in a bright, playful world with a running theme of inquisitiveness and strength.”

Perolls also has a form of red-green color-blindness, severe deuteranopia, which prevents him from distinguishing certain colors from a few others. In his eyes, the pink Missoni dress above is pink or gray, and a blue Stella McCartney outfit is blue or purple. “I suppose with my photography, being colorblind has naturally helped me to create my own color aesthetic based on how I see things,” he says. “It’s all based on gut instinct and what I feel looks right, rather than any specific rules or color palettes. Only people that also suffer from severe deuteranopia will see [these photographs] exactly as I do.” 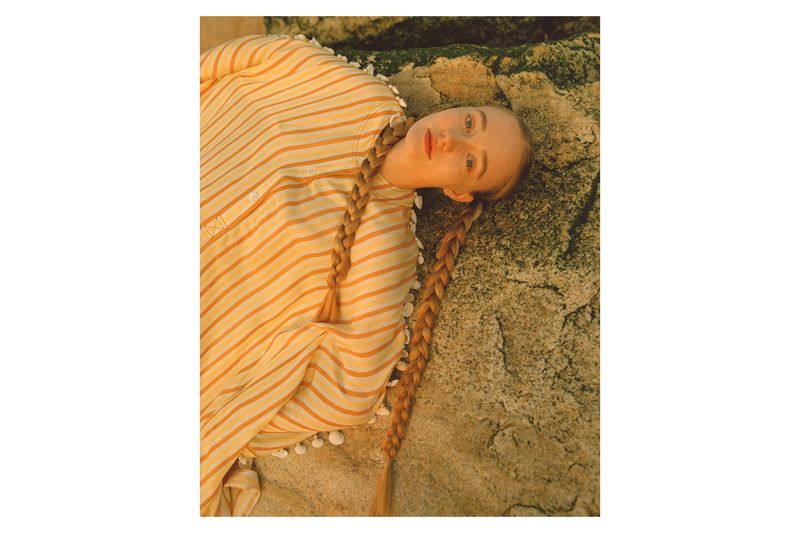 It was here, sitting on the sand three years ago, where Perolls decided to move to Berlin and become a full-time photographer. His return to the beach for this editorial was both a homecoming and an opportunity to explore feelings that any city transplant will recognize: the loneliness that we so often hide after moving to a bright new city.

“I wanted the model to appear calm and collected while harsh winds blew through the dresses, hair, and set design to represent psychological struggle,” he says. In one photo, even when the wind whips her white flag, her Dolce & Gabbana dress remains steadily in place. The reactive postures (balancing on rocks, holding her arms up to the wind) are meant to represent “pushing forward with courage and strength despite getting knocked back again and again,” Perolls says, just as this colorful clothing will push us toward spring.

This story has been revised since publication to include additional information.

Spring Fashion Captured in a Vibrant Seaside Town
5 questions with... 5:10 p.m.
Taraji P. Henson Wants to Move to Spain, Italy, or the South of France “Yeah, ’cause … I don’t know about this place anymore.”
celebrity 5:04 p.m.
Chris Pratt, Noted Bible Quoter, Says He’s Not Religious “I’m not a religious person,” says the man who posts Bible verses on Instagram.
gone sale-ing 4:15 p.m.
Ulta Beauty Is Doing a Sale It’s Never Done Your favorite hair products are on sale thanks to its Summer of Hair Love Event.
maxwell trial 2:42 p.m.
Ghislaine Maxwell Sentenced to 20 Years in Prison The judge ruled that Maxwell “directly and repeatedly and over the course of many years participated in a horrific scheme” of sexual abuse.
life after roe 2:40 p.m.
Major Retailers Are Rationing Morning-After Pills Purchase limits on Plan B are the latest ripple effect of the SCOTUS ruling overturning Roe.
gone sale-ing 2:22 p.m.
Your July 4 Sale Shopping Guide That NuFACE you wanted? It’s on sale.
immigration 1:39 p.m.
46 Migrants Were Found Dead in a Truck Near San Antonio Officials suggested they had overheated in a tractor trailer after being abandoned by the truck’s driver.
abortion 1:18 p.m.
Laura Prepon Recalls Her Choice to Terminate a Pregnancy “Everyone has their own story for seeking out this medical procedure.”
drugs 1:00 p.m.
Tripping Down the Aisle Mushroom microdoses are the new signature cocktails.
By Jenni Avins
abortion 12:10 p.m.
Another GOP Candidate Fails to Understand Rape, Possibly Also Sex Yesli Vega claimed that rape rarely results in pregnancy because “it’s not something that’s happening organically.”
ask a boss 12:00 p.m.
‘The New Hires at Work Are Driving Me Up a Wall’ Clarifying for yourself what you do and don’t need to act on will help make the situation more bearable.
huh! 9:58 a.m.
Ghislaine Maxwell Reportedly Offered Yoga Lessons in Prison A letter written by a fellow detainee characterized the convicted sex offender as “genuine and kind.”
life after roe 9:30 a.m.
How to Protect Yourself When Seeking an Abortion Learn your legal risks and take control of your digital privacy.
life after roe 9:30 a.m.
Don’t Trust the DIY Abortion Advice You See on TikTok These are the risks involved.
life after roe 9:30 a.m.
How to Have a Medication Abortion Where to find the pill and what to expect.
life after roe 9:30 a.m.
The Crisis Pregnancy Center Trap And how not to fall for it.
life after roe 9:30 a.m.
How to Get Help for Your Abortion The abortion mutual-aid network getting patients the funds, travel, and child-care assistance they need.
celebrity Yesterday at 5:45 p.m.
Jodie Sweetin Won’t Let Police Brutality Stop Her From Protesting The actor spoke out about the viral video of police pushing her to the ground during an abortion-rights protest.
celebrity Yesterday at 5:11 p.m.
Machine Gun Kelly Reveals He Attempted Suicide in New Documentary He was on the phone with Megan Fox at the time.
power Yesterday at 3:50 p.m.
Everything to Know About the WNBA Star in Russian Custody After her months in detention, Brittney Griner’s trial will begin on July 1.
More Stories