What we want hasn’t changed, and neither has Versace. 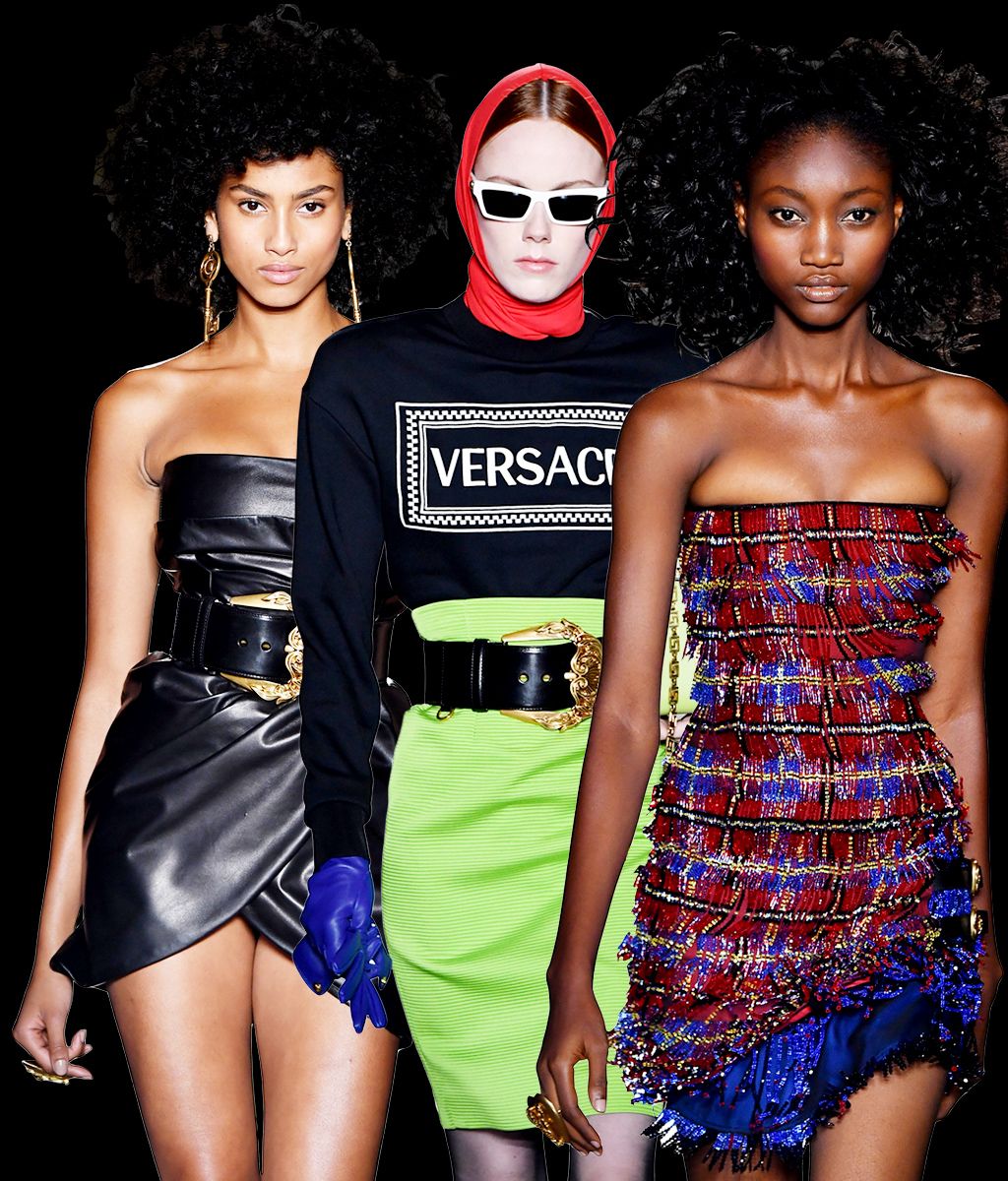 I’m going to try to explain to you why I love tacky fashion right now.

It’s something that’s been asked a lot of me lately, as my attraction to all things gaudy (animal prints, gold chains, long red nails) and stupid (Juicy Couture, giant logos, rhinestones) is a recent and somewhat perplexing development in my personal style trajectory.

Thus far, I’ve failed to come up with a good explanation. I’m Italian-American! I love The Sopranos! I was born in the ‘90s! What more do you need to know? It was only until I attended a Versace fashion show in the flesh during Milan Fashion Week on Friday night that I began to understand the complexities of all of the above’s appeal.

Before going any further, let me explain what I mean when I say “tacky” in this context. Tackiness, as a form of taste, lies in the eye of the beholder. Some people love it, others scoff at it. Society dictates that most tacky things are cheap-looking, but not necessarily cheap; kitschy; flashy; and sexualized. In my eyes, Versace is the best version of tacky. Since the beginning, the brand has elevated the style by bringing it into a luxury space – an act that is both rebellious and respectable.

It is rare in this fast-paced world for a brand to remain relevant while stubbornly hanging onto its roots, but the pure, extravagant, feminine fun of Versace clothes keeps the brand alive each season. Fall 2018 was no different.

The show took place across from the Duomo inside Milan’s historic Royal Palace, which is exactly as regal as it sounds. As one tall, blonde, Donatella Versace doppelgänger after another entered the room in full spring looks, I figured they might have an answer to my question. So I went over and asked them why, exactly, they loved what the brand was offering.

“I like the shapes. I like the materials. But most of all, I like the fact that Versace does a sexy woman,” said Kallirroy Danalis, a mother of four from Greece whose wedding dress and “every important dress” after that was made by Versace. “The woman Versace designs for is sexy and powerful,” she said. “That’s the look.”

I heard the same thing from everyone else I spoke to. Like literally, the same words: “sexy” and “powerful.” The blogger Denni Elias added that Versace was “empowering.” Meanwhile, Margaret Zhang chose “strident” and “unapologetic.” But I got the gist: Versace makes women feel awesome.

I would not call Versace’s latest show tacky, but it was still deeply Versace. The theme was “clans” of “new royals,” with classic Versace motifs on one side of the spectrum and girls in chain-sole sneakers and T-shirts on the other — all of which were blended together in some looks as a symbol of breaking boundaries. The only way to follow a blowout retrospective like last season’s show was to take Versace’s tentpoles and mix them up. It worked, and was also in step with what brands like Gucci and Prada are doing by offering a modern, hybrid woman.

In addition to hypersexualized looks like one particularly stunning cinched leather dress worn by Imaan Hammam, there were also power suits and more “modest” looks, which showed almost no skin and sometimes included head scarves. These, however, still had the look and feel of the Versace woman, who is confident in whatever way she chooses to dress herself.

In 2018, we’re way past shaming women for their different definitions of sexy. Or at least, we should be. Just this week, Jennifer Lawrence responded to tabloids who remarked on how cold she looked in a “plunging” black Versace dress while promoting her new movie, Red Sparrow.

“This is sexist, this is ridiculous, this is not feminism,” Lawerence wrote on her official Facebook page in response. “That Versace dress was fabulous, you think I’m going to cover that gorgeous dress up with a coat and a scarf? I would have stood in the snow for that dress because I love fashion and that was my choice.”

When your dress is so glam that you can’t wear a coat over it in the middle of winter. #JenniferLawrence

At the end of the day, I think this is why I love tacky fashion right now: It makes me feel sexy and powerful in ways that I know other people think it shouldn’t, which of course, makes it even sexier and more powerful. Fashion has been Céline-ified for the past decade, and Versace’s shameless, over-the-top femininity feels like something different, which is ironic, because the brand has never once toned itself down.

There’s a lot of talk about #MeToo right now, and whether or not fashion should respond on the runway. A lot of designers thus far have been afraid to acknowledge that in this moment, women still want to have sex. Versace has never been afraid of that. Hopefully, it never will be.

valentine's day 6 mins ago
58 Gifts for the Person You Love They deserve the world, but these picks will work too.
celebrity 1:59 p.m.
Finally, Something Bono and I Can Agree On He is apparently embarrassed by “most” of U2’s music.
news 1:56 p.m.
Cardi B Offers to Pay Funeral Costs for Bronx Fire Victims Last week’s apartment fire left 17 people dead and over 60 injured.
self 1:15 p.m.
I’m Tired of Explaining Why I Don’t Drink We have to expand our language beyond “sober.”
By Sarah Wood
remembrances 12:39 p.m.
The Fashion World Remembers André Leon Talley Designers, writers, and celebrities paid tribute to the inimitable fashion icon, who died on Tuesday at 73.
vampires 12:08 p.m.
Megan Fox’s Engagement Ring … Bites? “The bands are actually thorns. So if she tries to take it off, it hurts.”
celebrity 11:03 a.m.
Tracing the Ongoing Feud Between Britney and Jamie Lynn Spears Things spiraled out after Jamie Lynn went on Good Morning America to promote her new book.
style 9:35 a.m.
Anna Wintour Remembers André Leon Talley The Vogue editor mourned her friend and former colleague, calling him “a brilliant and compassionate man.”
in memoriam 8:33 a.m.
André Leon Talley Has Died The former Vogue creative director and editor passed away unexpectedly this week at the age of 73.
culture Yesterday at 8:10 p.m.
There Really Is a Coordinated Online Attack on Meghan Markle A new analysis found that the Duke and Duchess of Sussex were the targets of a strategic, monetized social media campaign against them.
euphoria Yesterday at 6:31 p.m.
8 Pieces You Can Shop From Episode 2 of Euphoria By Kim Shui, Réalisation Par, Nodaleto, and more.
fashion Yesterday at 6:24 p.m.
All Signs Point to a Big Year Ahead for Aimé Leon Dore The cult menswear brand has a New Balance collection in the works and LVMH money in its pocket.
engagements Yesterday at 6:13 p.m.
What Is Machine Gun Kelly Hiding? The story of his proposal to Megan Fox isn’t adding up.
the grammys Yesterday at 4:56 p.m.
The Grammys Are Back On The awards show has been pushed to April — and will now take place in Las Vegas.
health Yesterday at 4:45 p.m.
Everything to Know About Rapid At-Home COVID-19 Tests Americans are finally eligible to receive free rapid tests.
power Yesterday at 2:09 p.m.
The New York Post Gets Its Own Tabloid Scandal A former top editor sues, saying the paper’s notorious former boss was welcomed back after sexually harassing her.
By Shawn McCreesh and Angelina Chapin
movies Yesterday at 2:00 p.m.
Daniel Radcliffe, We Are Ready for Your Music Career The actor will be portraying Weird Al in an upcoming biopic.
the bigger picture Yesterday at 1:34 p.m.
Wrestling Has a Dark Side. But for Some, It’s a Safe Space. Photographer Sofie Vasquez spent a year traveling the country, documenting the indie-wrestling scene.
By Bindu Bansinath
keeping up with the royals Yesterday at 1:29 p.m.
Uh, Prince Andrew Has a Teddy Bear Collection? A new documentary claims he yelled at staff who didn’t arrange his stuffed animals to his liking.
dinosaur bones Yesterday at 12:48 p.m.
This Is a Truly Surreal Zoom Background Dwayne “the Rock” Johnson made a recent TV appearance sitting in front of an enormous dinosaur skull named Stan.
More Stories