A Dinner Party to Celebrate the Persian New Year

For a group of Iranian friends. 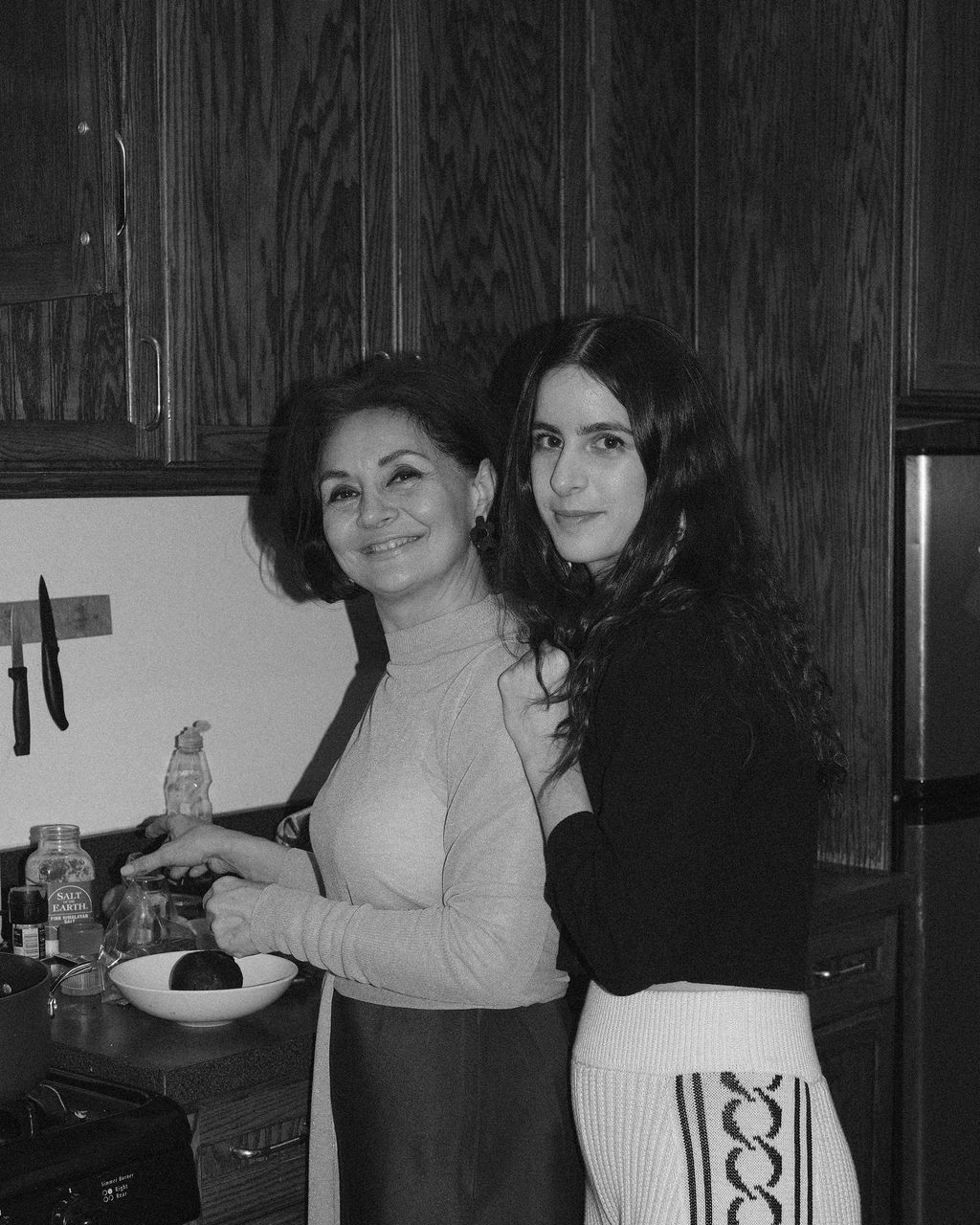 Mina Alyeshmerni wasn’t going to cancel her dinner plans just because of an inconvenient blizzard. Especially since this was no ordinary dinner — it was Nowruz, or Persian New Year, a dinner party her ancestors have hosted for over 3,000 years.

While Nowruz has roots in Zoroastrianism, it’s inclusive of everyone. Held at the turn of the vernal equinox, the holiday is observed not just at the tables of Iranians but Indians, Turks, and Afghans. Alyeshmerni has a tendency to collect culturally hungry artistic types, whether in her own home or as part of her store, Maimoun, so it’s no surprise that she gathered a group of like-minded women in her home for a Nowruz party on Tuesday night.

The custom of setting the table for Nowruz is known as a haft-seen. In Alyeshmerni’s Williamsburg apartment, there was first a khooneh takouni (a “shaking of the house,” the Persian version of spring cleaning). Then family heirlooms were brought out on the mantle.

Mina dressed an end table with satin, placing on top a mirror, garlic, lentil sprouts, apples, dishes of vinegar and sumac, and a plate of sweet paste called samanu. She told me the items displayed all start with the letter s in the Persian alphabet. Added to the chef d’oeuvre were eggs, coins, hyacinth, a bowl of fish, and an Iranian poetry book.

Mina’s finishing touch was her guest list of fashionable Iranian women, who, like her, work for themselves: Clémence Polès from Passerbuys, Nicole Najafi who runs Tio y Tia and Industry Standards — and an eccentric blogger named Pari Ehsan, who was wearing Lou Dallas and had just gotten back from sneaking into David Zwirner for a photo shoot. Also at the table was writer Fariha Róisín.

Gita served us traditional stews called khoresht karafs and gheimeh, kebabs, lemon chicken, and green Persian rice with tahdig. During dinner, she talked about her life in Iran before the revolution, and asked the table if anyone had gone back yet. Pari said it had been difficult because she hadn’t obtained her birth certificate. “It’s easier to go to Iran if you’re a foreigner than when you’re an actual citizen,” she professed. We grabbed seconds over discussions of systemic racism and the fundamental hurdles of being Muslim.

Under the dim lights, Nicole recalled memories of growing up around parties full of belly dancing and songs until dawn. Gita described older customs of Nowruz — jumping over rows of fires, hitting each other with scallions. Bastani, a pistachio ice cream doused in rosewater and saffron, was brought out for dessert. The flavor of the rosewater paired with orange wine made everyone’s breath smell like jasmine.

We moved from table to couch, continuing to weave stories of the past with hopeful anecdotes for the future. The evening’s intimacy made it easy to forget about the arctic landscape outside, and everyone agreed that welcoming the new year on the first day of spring is logical nonetheless. After all, it’s a celebration of adaptation. “Be salamati! Eide Mobarak!” we toasted by the end of the night. “To life! Happy new year!”

+Comments Leave a Comment
A Dinner Party to Celebrate the Persian New Year
life after roe 29 mins ago
Major Retailers Are Rationing Morning-After Pills Purchase limits on Plan B are the latest ripple effect of the SCOTUS ruling overturning Roe.
gone sale-ing 2:22 p.m.
Your July 4 Sale Shopping Guide That NuFACE you wanted? It’s on sale.
immigration 1:39 p.m.
46 Migrants Were Found Dead in a Truck Near San Antonio Officials suggested they had overheated in a tractor trailer after being abandoned by the truck’s driver.
abortion 1:18 p.m.
Laura Prepon Recalls Her Choice to Terminate a Pregnancy “Everyone has their own story for seeking out this medical procedure.”
drugs 1:00 p.m.
Tripping Down the Aisle Mushroom microdoses are the new signature cocktails.
By Jenni Avins
abortion 12:10 p.m.
Another GOP Candidate Fails to Understand Rape, Possibly Also Sex Yesli Vega claimed that rape rarely results in pregnancy because “it’s not something that’s happening organically.”
ask a boss 12:00 p.m.
‘The New Hires at Work Are Driving Me Up a Wall’ Clarifying for yourself what you do and don’t need to act on will help make the situation more bearable.
huh! 9:58 a.m.
Ghislaine Maxwell Reportedly Offered Yoga Lessons in Prison A letter written by a fellow detainee characterized the convicted sex offender as “genuine and kind.”
life after roe 9:30 a.m.
How to Protect Yourself When Seeking an Abortion Learn your legal risks and take control of your digital privacy.
life after roe 9:30 a.m.
How to Get Help for Your Abortion The abortion mutual-aid network getting patients the funds, travel, and child-care assistance they need.
life after roe 9:30 a.m.
Don’t Trust the DIY Abortion Advice You See on TikTok These are the risks involved.
life after roe 9:30 a.m.
How to Have a Medication Abortion Where to find the pill and what to expect.
life after roe 9:30 a.m.
The Crisis Pregnancy Center Trap And how not to fall for it.
celebrity Yesterday at 5:45 p.m.
Jodie Sweetin Won’t Let Police Brutality Stop Her From Protesting The actor spoke out about the viral video of police pushing her to the ground during an abortion-rights protest.
celebrity Yesterday at 5:11 p.m.
Machine Gun Kelly Reveals He Attempted Suicide in New Documentary He was on the phone with Megan Fox at the time.
power Yesterday at 3:50 p.m.
Everything to Know About the WNBA Star in Russian Custody After her months in detention, Brittney Griner’s trial will begin on July 1.
the bigger picture Yesterday at 3:15 p.m.
Thirty Years of Community — Not Cops or Corporations — at the Dyke March Scenes from this weekend’s anniversary march in New York City.
By Melissa Kravitz Hoeffner
jussie smollett Yesterday at 3:12 p.m.
What Was Jussie Smollett Doing at the BET Awards? The star, who was found guilty of staging a hate crime in 2019, appeared on Sunday’s red carpet.
celebrity Yesterday at 3:08 p.m.
Ireland Baldwin Opens Up About Her Abortion “I chose me, and I would choose me again.”
celebrity Yesterday at 1:34 p.m.
Ben Affleck Is Looking for Reasons to Be Stressed Why else would he let his 10-year-old son get behind the wheel of a Lamborghini?
More Stories