The Zac Posen mannequin designed for the show. Photo: Courtesy of SAPAR contemporary

If good taste is genetic, then Emma Kathleen Hepburn Ferrer won the lottery. The 23-year-old curator (and granddaughter of Audrey Hepburn) launched her first exhibit in New York last week. The show, at SAPAR contemporary, is about how designers turn their ideas into real-live garments. It combines mannequins, sketches, and miniature dresses to show the individualized processes that six designers take to bring their ideas to life. And in true Hepburn-style, it’s glamorous in its simplicity.

The centerpiece of the exhibit is a custom mannequin by Zac Posen, known for his painstaking attention to detail and draping. The mannequin wear a half-done evening gown in shades of pink and gray with a beautiful, long train — almost reminiscent of a fully-finished Comme des Garçons dress.

This is Ferrer’s first exhibit as a curator. A portion of the proceeds from the exhibit will go to the United Nations High Commissioner for Refugees. (Ferrer is an ambassador to the UNHCR.) Scroll on to see snippets from the show. 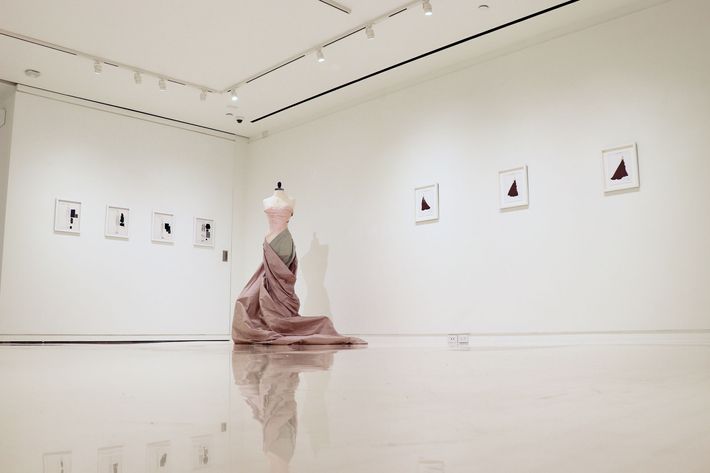 huh! 9:58 a.m.
Ghislaine Maxwell Reportedly Offered Yoga Lessons in Prison A letter written by a fellow detainee characterized the convicted sex offender as “genuine and kind.”
life after roe 9:30 a.m.
How to Protect Yourself When Seeking an Abortion Learn your legal risks and take control of your digital privacy.
life after roe 9:30 a.m.
How to Get Help for Your Abortion The abortion mutual-aid network getting patients the funds, travel, and child-care assistance they need.
life after roe 9:30 a.m.
Don’t Trust the DIY Abortion Advice You See on TikTok These are the risks involved.
life after roe 9:30 a.m.
How to Have a Medication Abortion Where to find the pill and what to expect.
life after roe 9:30 a.m.
The Crisis Pregnancy Center Trap And how not to fall for it.
celebrity Yesterday at 5:45 p.m.
Jodie Sweetin Won’t Let Police Brutality Stop Her From Protesting The actor spoke out about the viral video of police pushing her to the ground during an abortion-rights protest.
celebrity Yesterday at 5:11 p.m.
Machine Gun Kelly Reveals He Attempted Suicide in New Documentary He was on the phone with Megan Fox at the time.
power Yesterday at 3:50 p.m.
Everything to Know About the WNBA Star in Russian Custody After her months in detention, Brittney Griner’s trial will begin on July 1.
the bigger picture Yesterday at 3:15 p.m.
Thirty Years of Community — Not Cops or Corporations — at the Dyke March Scenes from this weekend’s anniversary march in New York City.
By Melissa Kravitz Hoeffner
jussie smollett Yesterday at 3:12 p.m.
What Was Jussie Smollett Doing at the BET Awards? The star, who was found guilty of staging a hate crime in 2019, appeared on Sunday’s red carpet.
celebrity Yesterday at 3:08 p.m.
Ireland Baldwin Opens Up About Her Abortion “I chose me, and I would choose me again.”
celebrity Yesterday at 1:34 p.m.
Ben Affleck Is Looking for Reasons to Be Stressed Why else would he let his 10-year-old son get behind the wheel of a Lamborghini?
budgeting Yesterday at 1:00 p.m.
This Wedding Season Is Going to Cost You Budgeting for someone else’s big day.
By Emma Turetsky
why? Yesterday at 12:20 p.m.
Alec Baldwin Has Taken It Upon Himself to Interview Woody Allen This seems like a bad idea, but carry on.
brooding Yesterday at 12:00 p.m.
What Even Is a Resilient Child? An unexpected Instagram exchange made me consider how growing up with social media affects kids.
bet awards Yesterday at 11:27 a.m.
Jazmine Sullivan Wants Men to Talk About Abortion Too Presenters at the BET Awards were outspoken about the loss of Roe — but the men were noticeably silent.
gone sale-ing Yesterday at 10:00 a.m.
Tatcha Lovers, It’s That Time of Year Again All its products are on sale, but today’s the last day!
how i get it done Yesterday at 7:00 a.m.
How Pro Wrestler and WWE Superstar Bianca Belair Gets It Done And a message to the Rock: You need to put her in your next movie.
By Jane Starr Drinkard
astrology June 26, 2022
Madame Clairevoyant: Horoscopes for the Week of June 27 Early Tuesday morning, Neptune retrograde begins. For better or for worse, you’ll have to reckon with the world as it actually is.
By Claire Comstock-Gay
More Stories