Even Karl Lagerfeld Knows That Times Are Tough

His subdued new Chanel collection seemed to nod to #MeToo and right-wing politics. Plus: Sarah Burton’s unique touch at McQueen. 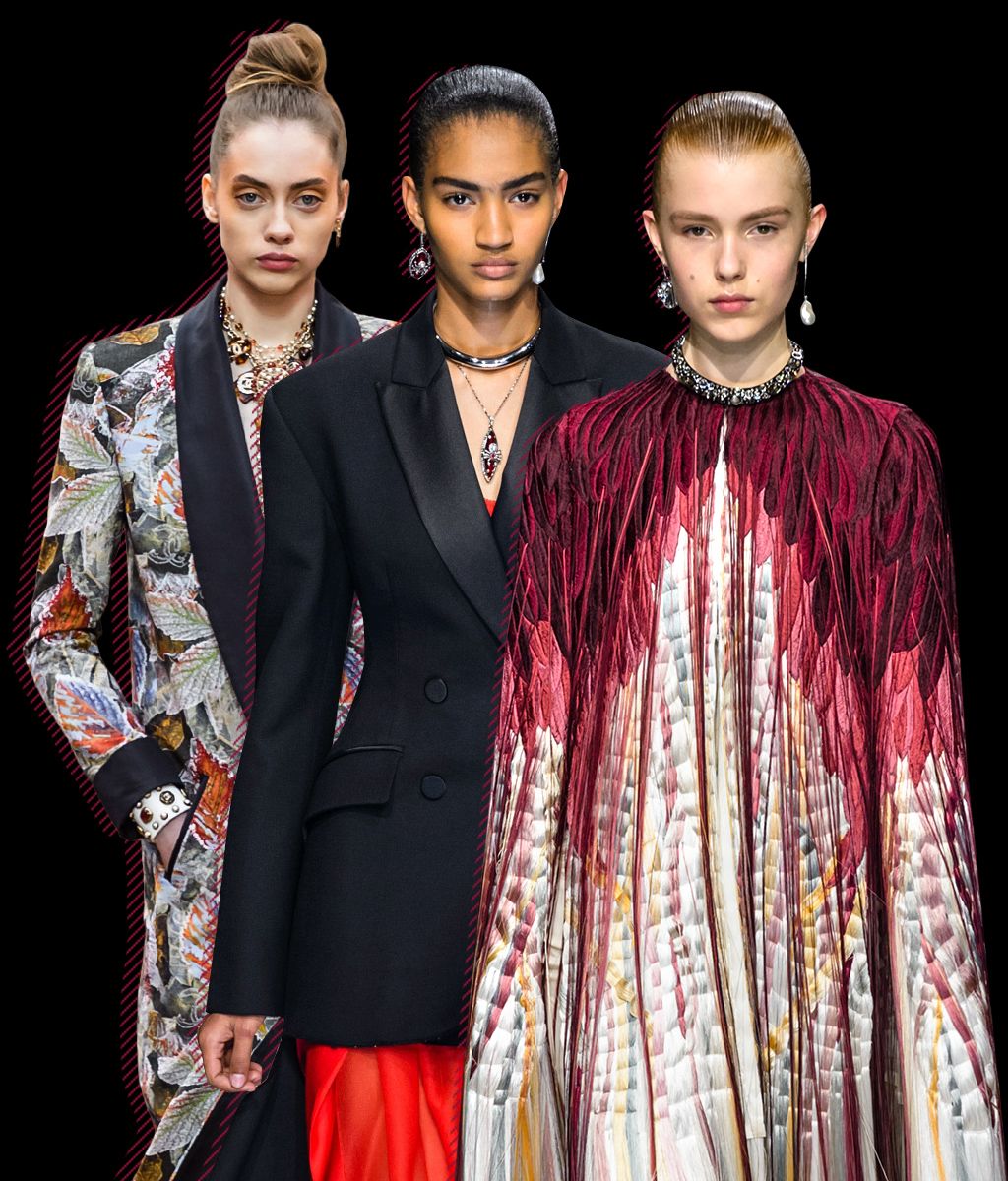 This morning, Karl Lagerfeld presented Chanel in a virtual woods inside the Grand Palais. Loads of rotting leaves were trucked in from a tree farm and spread, along with moss, on the floor, making it the most expensive mulch in Paris. The aroma was heady — “like wet dog,” someone said. Down the center were nine 55-foot oak and poplar trees, with more on the sides, all of them leafless and dead. Meanwhile, outdoors, spring was showing.

The clothes were equally somber, with black and earth-tone tweed coats buttoned to the neck and hemlines to the ankles. If that wasn’t enough to protect against the elements, there were long knit dresses with high collars and boots, fat knitted scarves, thick turtlenecks, and down jackets with braid trimming.

In other words, this was not one of Lagerfeld’s romps, full of irony and cute Coco accessories. Nothing says conservative like a long walk in the woods in a drably autumnal tweed turnout. Some styles, like wide trousers in mottled gold leather and leaf-patterned coats, were ugly. Leaf patterns are almost never a good idea except on curtains.

But if you judge the clothes solely on the basis of style or how they compare to other Chanel extravaganzas, you’ll miss what I suspect was Lagerfeld’s aim — to reflect a shift in attitudes in the wake of #MeToo. A brand like Dior, for example, might issue a feminist-slogan sweater or invoke the protests of May 1968. But that’s neither Chanel’s nor Lagerfeld’s style. I’ve never known him to respond overtly to politics — comment on it privately, yes — and he’s hardly a retro designer, unless the inspiration is something in Coco Chanel’s history. Lagerfeld has always claimed to be above commerce, but after more than three decades at Chanel, of quietly adjusting his ideas to suit changing tastes and lifestyles, it’s safe to say he knows something about his customer. And my guess is he’d view the anger around #MeToo, as well as the unsettling political climate in America and parts of Europe, as cause to give Chanel a subdued, covered-up look that emphasizes pursuits far from the battle lines. At least for now.

A lot of fashion this week was so covered up it seemed in retreat, like a hibernating bear. This was especially true at Stella McCartney, where oversize checked coats and Aran sweaters were layered over soupy pants with sneakers. McCartney also had the weird idea of draping a layer of lace-edged chiffon over photo-print dresses, as well as a white-lace catsuit. Unfortunately, the tented effect wasn’t far from a dormitory Snuggly. And she missed an opportunity to leave her mark in a strong tailoring season. Instead, she fiddled around with deconstruction — coats shown inside out, a lining as a bare-bones dress. The results weren’t fresh.

At Alexander McQueen, Sarah Burton also created hybrids of jacket or dress components — assembling, say, a black-leather motorcycle jacket with the lower portion of a white blazer and then slicing in a third layer of black leather below the white jacket hem, all in one piece. With Burton, though, you feel she’s too passionate about beauty and craft to create something that doesn’t look exquisite and also measure up to the legacy of Lee McQueen.

People sometimes say Burton is still in McQueen’s shadow eight years after his death, but I don’t think so; she’s shown in the past few years that she has a modern, pragmatic take on his fantasy, and she’s always been a pro at tailoring — better than most of her peers. People also say she could achieve more at a real couture house, and they point to the example of Maria Grazia Chiuri at Dior and Clare Waight Keller at Givenchy. Well, maybe, but Burton also does things at McQueen that no one else in the industry does.

For example, instead of giving her jackets sharp shoulders — as most designers are doing — she rounded the line slightly in order to make the garment appear softer and more feminine. At the same time, she put six or seven seams in the waist of the jacket to emphasize female shape, though not to the extent of making it look corseted, like a Thom Browne jacket. In the opening look, on Binx Walton, she added what looked like the portion of a man’s tailcoat — partly to inject a masculine element, but more to give fluidity to an otherwise lean pantsuit.

Throughout the collection, she toggled between female strength and vulnerability — a tuxedo coat dress inset with asymmetrical panels of black lace, say, or belted coats and long-sleeved silk dresses whose multihued pattern looked pagan warrior, but in fact was an exploded image of a monarch butterfly. The most fragile dresses were made of long, unwoven streamers of fine silk thread, but then there were fitted dresses in crisp cotton canvas, and jaunty black coats with red-striped blanket fringe that evoked the Horse Guards.

Burton, in a rumpled white cotton shirt and faded jeans, didn’t talk politics or even wax on female empowerment as she walked down the line of models backstage before they hit the runway. “We’re just human,” she said.

See All
bye bye 12:07 p.m.
Good Riddance to the Golden Globes Would it be so bad if the ceremony ceases to exist?
ask a boss 12:00 p.m.
‘My Boss Expects Me to Work 11-Hour Days’ Is your boss right that this is what you can expect in your field, or is it just what you can expect when working for her?
best of both worlds 11:38 a.m.
So This Is How Billie Eilish Hid Her Blonde Hair The singer confirmed she wore a Billie Eilish Halloween-costume wig on a previous Late Show appearance.
celebrity 10:56 a.m.
At Least One Person Is Not Happy About Bennifer A-Rod is reportedly “shocked” and “upset” by the news that J.Lo is spending time with Ben Affleck.
dating 8:00 a.m.
Drag His Ass Wants to Fix Your Love Life Comedian Mary Beth Barone explains her f**kboy-redemption program.
science of us 8:00 a.m.
The Clock-Out Cure For those who can afford it, quitting has become the ultimate form of self-care.
covid-19 Yesterday at 7:00 p.m.
When Will Kids Be Able to Get the COVID Vaccine? The FDA has authorized the Pfizer vaccine for children ages 12 to 15.
duh Yesterday at 6:37 p.m.
Shockingly, No One Thinks ‘Instagram for Kids’ Is a Good Idea Forty-four attorneys general are urging Mark Zuckerberg to please abandon his plans for a 13-and-under version of the app.
comedy Yesterday at 4:53 p.m.
John Mulaney and His Wife, Annamarie Tendler, Are Divorcing Who will have custody of Petunia?
sneakerheads Yesterday at 4:45 p.m.
30 Pairs of Sneakers to Buy Right Now There’s no one sneaker trend for spring 2021, and that makes it all the more fun.
By Andrew Nguyen
skin deep Yesterday at 3:33 p.m.
John Legend Loves His Wife and Her Beauty Products “I’m married to a woman who deals with a lot of challenges on social media, to say the least.”
scent memories Yesterday at 3:28 p.m.
For Saweetie, Friendship Smells Like Strawberry Cupcakes Catching up with the rapper and face of SinfulColors’ scented nail-polish line.
By Erica Smith
bennifer Yesterday at 3:10 p.m.
It Looks Like Bennifer Is Back The former fiancés were photographed holding hands on a recent trip to Montana.
i hate it here Yesterday at 2:28 p.m.
Jeff Bezos’s New Yacht Comes With Its Own Yacht? The $500 million superyacht is among the largest ever built.
girl groups Yesterday at 1:09 p.m.
She Wanted to Be a Pop Star. Now She Gets to Play One on TV. The Tony-winning Renée Elise Goldsberry is the MVP of the witty new series Girls5eva.
tv Yesterday at 12:44 p.m.
Oprah and Prince Harry Made a TV Show The Me You Can’t See sees the duo interviewing a host of celebrity guests about mental health, and opening up about their own struggles.
celebrity Yesterday at 11:50 a.m.
Notorious Cheater Has Allegedly Cheated Again The latest drama with Tristan Thompson and Khloé Kardashian keeps getting messier.
my brain hurts Yesterday at 11:21 a.m.
Okay, This Is Definitely Cheugy The term’s creator is selling the word as a now heavily discounted NFT.
finer things Yesterday at 11:12 a.m.
There’s No Such Thing As Too Much Color Especially when it comes to accessories.
By Emilia Petrarca
celebrity babies Yesterday at 10:19 a.m.
Samira Wiley and Lauren Morelli Had a Baby! A baby girl named George.
More Stories