Why Riccardo Tisci Is the Right Man for Burberry

Plus: A sublime Margiela retrospective; special subtlety at Chloé and Lemaire. 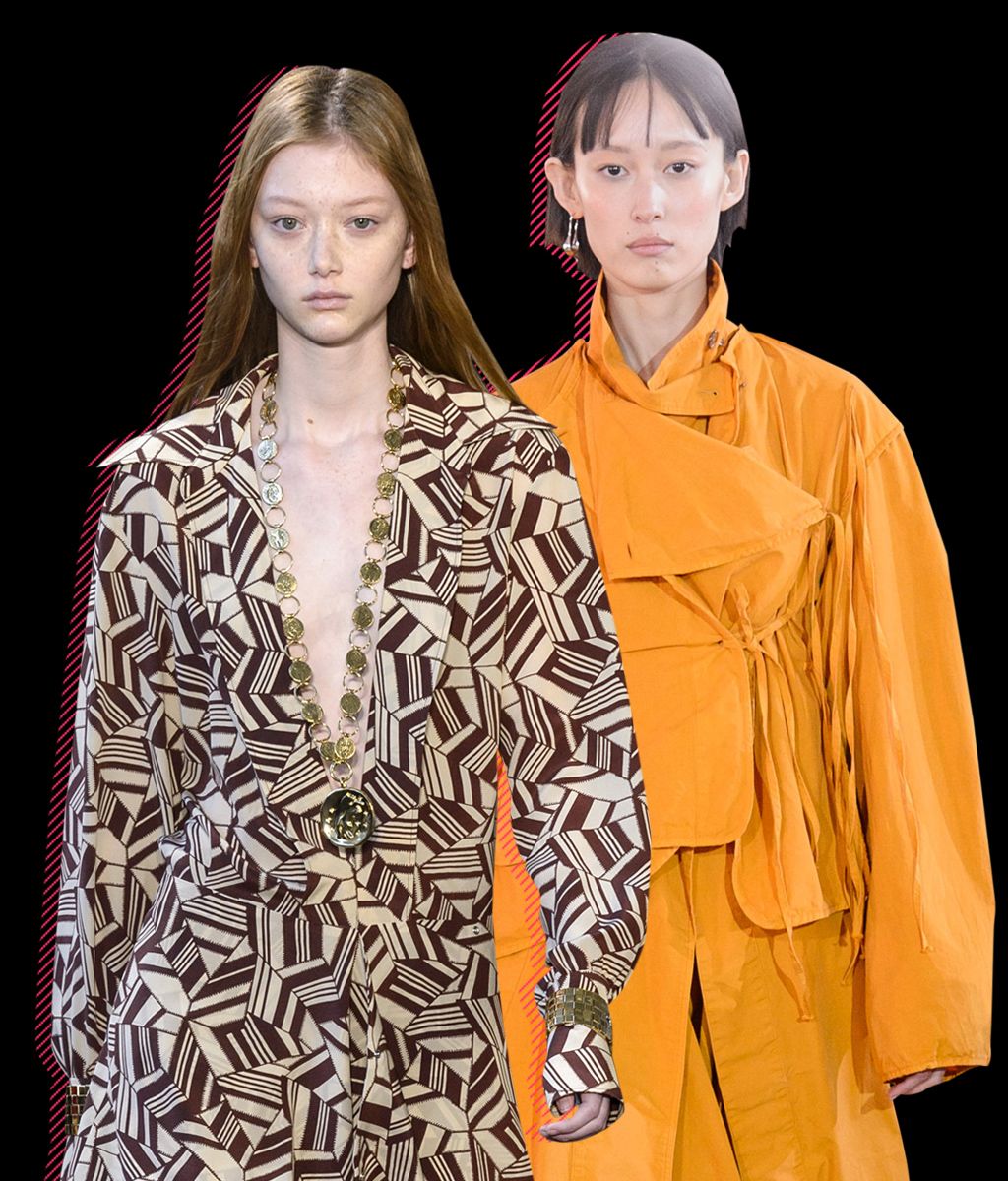 On a tour of the new Martin Margiela retrospective at the Palais Galliera, former director Olivier Saillard told me it would be a good idea if costume museums like the Galliera showed the work of rebels like Rei Kawakubo, Azzedine Alaïa, and Margiela every 20 years. “Just so young people can see what the clothes actually looked like,” Saillard said. “Because, right now, all they know are images of clothes.”

I’ll have more to say tomorrow about the exhibit, but I was struck by the truth of Saillard’s words. If you don’t see the actual garments — the small shoulder line and darts of a white T-shirt dress from Margiela’s very first show in 1988, the sublime construction of a raw linen jacket from the iconic 1997 Stockman show, the extremely subtle historical cast (especially from the Edwardians) to many of his pieces — it’s difficult to fully appreciate what a true master Margiela was. He was a genius, yes; he destroyed many of our assumptions about how high-end fashion should look and be presented. But more than anything else, you realize while strolling this retrospective that he thought about clothes and how to make them like the greatest of couturiers.

Saillard’s comment points out a profound change, or divide, in the industry, one underscored by the news today that Riccardo Tisci, lately of Givenchy, will take over as creative director at Burberry, the very British raincoat maker founded in 1856. People were stunned, judging by the reaction on social media, and jokes about “goth trenches” at Burberry — Tisci loves a cross — were plentiful before the start of the first morning show, Chloé. I guess some editors thought Kim Jones, a Brit, would have been a better choice, while others foresaw an incongruously dark Burberry, since that’s the mood that Tisci tended to bring to Givenchy.

Personally, I thought it was a logical choice. Chanel might not be a heritage brand like Burberry, but certainly no one would say that being German has prevented Karl Lagerfeld from designing the most cherished of French names. To me, though, the real reason that Tisci makes sense for a mega-brand like Burberry is that he’s an image-maker. I don’t put him in the same designer class as Lagerfeld, or Margiela or Alaïa — he’s never destroyed one assumption I’ve had about fashion or beauty or femininity — but that’s okay. Because Tisci is good at creating excitement and buzz and mild controversy. He’s an image guy, and that links in well with Burberry, an early adopter of live-streaming and social media. And because the name is such an institution, known for its plaid and connections to British royals, it depends to an extent on designs that can be scaled to a big, hungry, Hello! magazine–reading audience. No, Tisci’s your man.

Come September, with Tisci swinging from London and Hedi Slimane at Céline (why don’t they just call it Slimane), Fashion Week is going to feel like Tarzan hour. But that’s just it: Where are the female earth-shakers? This is probably a topic that deserves to be explored more fully than I can do here, but are women designers just lousy as image-makers? Or are they just appalled at the idea? And are they attracted more to designs that feel personal, that rely on craft and small gestures — and, as a result, cannot be easily scaled for a big, largely uncritical audience? Donatella Versace comes to mind as the closest thing to a female image-making designer in recent memory, but the younger generation has shown little interest in projecting at grand scale so far.

The quiet work of Natacha Ramsay-Levi at Chloé and Christophe Lemaire and his partner Sarah-Linh Tran at the label Lemaire is certainly very special. After seeing Lemaire’s swishing skirts in monochromatic cream, mustard, and dark blue, with subtle hints of aprons and other layers, I kept thinking about them all day. What a great way to dress, I thought. (Not surprisingly, editors were saying that Lemaire’s generous coats and cool shirting might appeal to Phoebe Philo fans, now that she’s left Céline.) Lemaire and Tran have great taste, their fall clothes would give mere mortals an ease, and I love their considered details. One of my favorite looks was a cropped, dark brown leather jacket, cut with a bit of volume and with what looked like shirt pockets, worn over a dark blue shirt and matching trousers.

This was Ramsay-Levi’s second collection for Chloé and she added more shapes, opening with long, lightly layered dresses with asymmetrical hems. Though her debut show was packed with fresh-looking styles, and revealed the range of her tastes — for travel, books, craft — the collection was skewed too young. She’s changed that for fall. Among the best looks were creamy ribbed pullovers with a bit of feminine shape, satin shirts, and separates with appliqués that seemed a blend of American West and Russian folk patterns.

There’s no doubt that Ramsay-Levi, who spent 15 years working for Nicolas Ghesquière (who was in the audience), knows how to create a distinctive, eye-catching style and silhouette. Those long dresses, as well as pegged pants and a muted, almost vintage palette, seem based on her personal style. For me, the question ahead is whether Ramsay-Levi can translate that idiosyncratic style, and even expand it, for a more diverse Chloé audience.

investigations Oct. 22, 2021
Why Does the Dune Worm Look Like … That? We asked the movie’s VFX supervisor.
parties! Oct. 22, 2021
The Bestest Party Looks of the Week Did someone say Doc Martens?
campaigns Oct. 22, 2021
Louis Vuitton Celebrates Third Release of Limited-Edition Bags Say hello to the Artycapucines collection.
rust Oct. 22, 2021
Cinematographer Dies in Prop Gun Accident on Alec Baldwin Movie Set Alec Baldwin reportedly fired a blank during rehearsal or filming, killing Halyna Hutchins and injuring the director.
dream date Oct. 22, 2021
#LawrenceHive Forever Insecure’s Jay Ellis is ready for a happy ending.
By Ashley Ray Harris
obituaries Oct. 22, 2021
Cinematographer Halyna Hutchins Was Known As ‘a Brilliant Mind’ Friends and colleagues remember the 42-year-old director of photography who was killed on set when Alec Baldwin discharged a prop firearm.
let's talk about sex Oct. 22, 2021
Can You Goop Your Way to Better Orgasms? We asked for good sex advice from Gwyneth Paltrow.
cannabis Oct. 22, 2021
A Weed Experience Without the Smoke Welcome to the Stone Age: a 9,000-square-foot space filled with black-light murals, interactive art, and installations.
crime Oct. 22, 2021
Lyft Received Over 1,800 Sexual-Assault Reports in a Year After dragging its feet for years, the company has finally released new safety data.
abortion Oct. 22, 2021
What’s Next for the Extreme Texas Abortion Ban? The Supreme Court will hear opening arguments in the case on November 1.
window shopping Oct. 22, 2021
It’s Already Time for Holiday Windows First up, Prada at Bergdorf Goodman.
friday sales Oct. 22, 2021
20 Things on Sale You’ll Actually Want to Buy: From Everlane to Revival Including some non-gluey lip gloss and a therapist-designed notebook for reducing anxiety.
Oct. 22, 2021
All the Zendaya and Timothée Chalamet Dune Red Carpet Looks A roundup of Z & T’s epic looks
By Vivian Chuang
terfs Oct. 22, 2021
All the Fallout From Dave Chappelle’s Controversial New Special Amid widespread backlash to transphobic jokes in his latest set, Netflix continues to stand behind the comedian.
are u coming? Oct. 22, 2021
Sophia Lamar Has Seen the Likes of You Before The nightlife veteran and former club kid is still hosting parties at Paul’s Casablanca.
By Brock Colyar
encounter Oct. 22, 2021
Rebecca Ferguson Is the Real Star of Dune She plays the intimidating Lady Jessica in the sci-fi epic. She’s much friendlier in person.
By Hanna Hanra
hot bod Oct. 22, 2021
Can We Outrun Our Winter Dread? As the weather gets colder, I’m clinging to a fitness project.
¡hola papi! Oct. 22, 2021
‘I Don’t Know Who I Am After My Divorce’ I don’t think identifying yourself by the people around you is as bad as it sounds.
By J.P. Brammer
crime Oct. 21, 2021
What We Know About the Disappearance of Gabby Petito Her fiancé, Brian Laundrie, has been missing for over a month. Now, authorities say they’ve found his remains.
:( Oct. 21, 2021
Sounds Hard to Be This Hot and Smart Just ask Kate Beckinsale!
More Stories