Church Mothers On the Joy of an Easter Hat

Sunday sermons and a love of style at Abyssinian Baptist Church in Harlem. 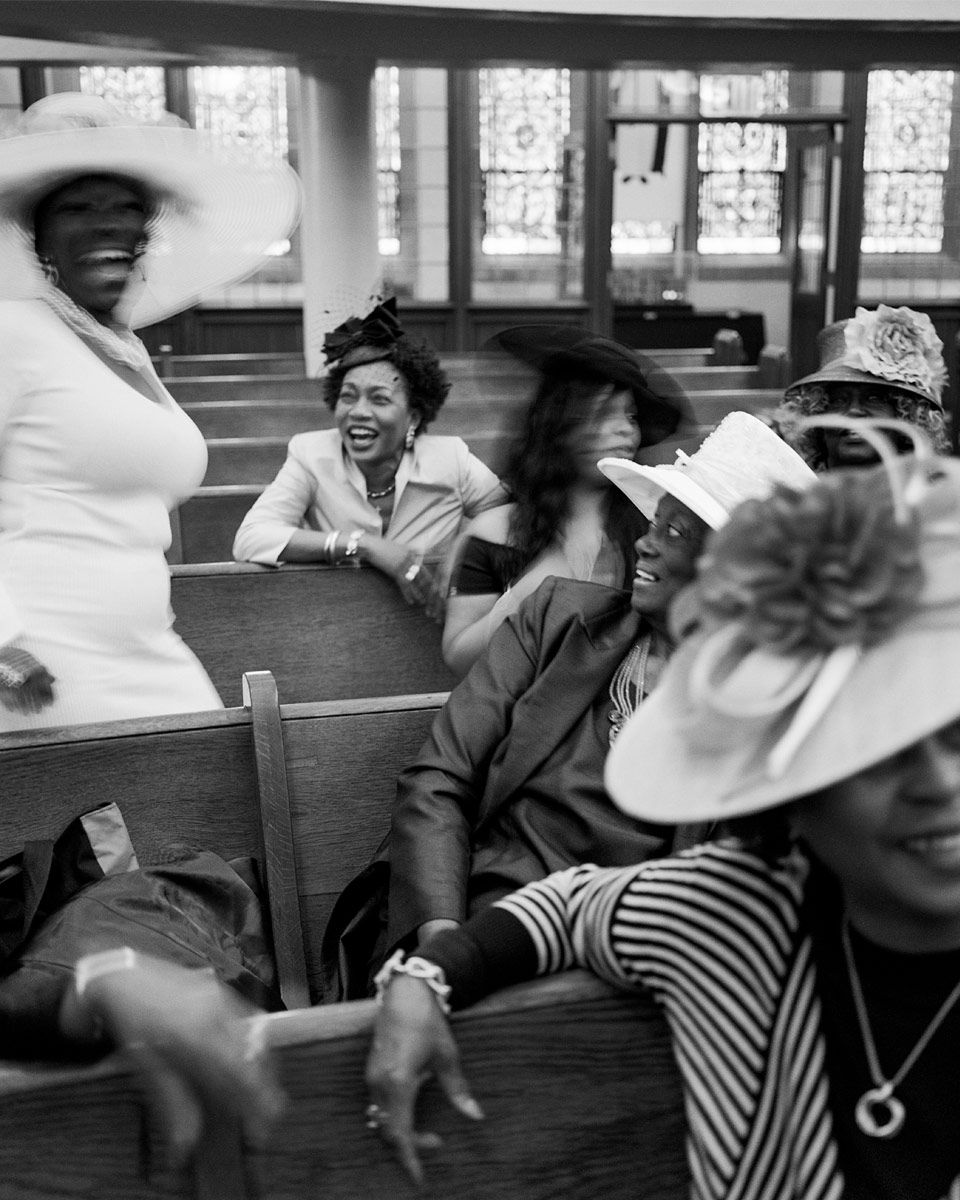 The notion of “Sunday best” was one of my earliest introductions to style. As a kid, I spent hours in my mother’s closet on Saturdays, carefully taking the boxes down from the top self, helping her choose which elaborate headdress she would wear the following morning. The one I remember most was a white straw hat with giant black polka dots all over; it was anything but subtle, and my mom said I used to pull it off of her head and try to wear it when I was a baby. When she wore it, I imagined my mother as something more than regal — she was angelic.

The centuries-old custom of elaborate church outfits derives from a Biblical decree (1 Corinthians 11:15) to cover your head during worship, and black women, even in times of slavery, took that opportunity to be creative and resourceful, adding any scraps of flowers, bows, or ribbons to straw hats to make them look more festive and formal.

During the civil-rights movement, church was not only a place of worship but a place that provided leadership roles and status for black women. Pioneering milliner Mae Reeves’s exhibition at the Smithsonian proved its significance in culture, starting her business of making church hats with only $500, and ended up with clients Ella Fitzgerald and Lena Horne. My own grandmother worked at a steel and boiler factory through the week, but come Sunday, she was the best-dressed woman in the congregation — every accessory immaculately coordinated, from her wide-brimmed hat to her wrist-length lace gloves and perfectly shined kitten heels. And since she always sat in the front row with other church mothers, the “hattitude” was very real.

It’s a tradition that’s alive and well and beloved in black culture, so when I got the chance to spend time with the women of Abyssinian Baptist Church in Harlem, we immediately bonded over the nostalgic love of church mothers in hats. More than aesthetics, these crowns are symbols of honor and holding your head high. Nestled in a pew dedicated to André Leon Talley, former Vogue magazine editor-at-large, the Cut sat down with a few longtime congregants to get a little of their impeccable style and wisdom.

“As a child, we went to a small storefront church in the Bronx, and there was an older woman named Miss Belle who always wore hats and these beautiful lace handkerchiefs, and that’s stayed with me to this day. This is my tenth year at Abyssinian, and I love the tradition of getting dressed so much that I wish we had the opportunity to wear hats more. I bought this hat in London, after I found out the designer used to make hats for Princess Diana, and had this shipped back home.” —Debora Jones

“I like to wear a hat that’s sassy. I’ve been going to this church for 80 years — I used to be an usher, I’ve been a missionary, and I get emotional when I think about all the women, including my mother, Grace E. Jones, that have made me what I am. It means a great deal to me to be a church mother.” —Grace Jones

“I grew up on patent-leather shoes and dressing up for church; back then, all we had was school clothes, play clothes, and church clothes. Even now, when I come to church, I always wear a hat and a dress. I enjoy it! Anybody who asks you about June, they’ll tell you June dresses her butt off on Sunday because it’s for God.” —June Broxton

+Comments Leave a Comment
On the Joy of an Easter Hat
rust 4:00 p.m.
Everything We Know About the Rust Shooting Alec Baldwin and prop armorer Hannah Gutierrez-Reed have been charged with involuntary manslaughter.
spring fashion 3:00 p.m.
Vitamins for Virgos, Candles for Capricorns Truly everybody wants in on astrology.
obsessive tester 2:50 p.m.
Your Guide to the Best Tinted Moisturizers Summer is a makeup mind-set.
By Ashley Weatherford and Chinea Rodriguez
skin deep 2:27 p.m.
Are At-Home Beauty Devices Even Worth It? Should you microcurrent, LED, and microneedle at home?
spring fashion 12:00 p.m.
The Oh-So-Popular Popcorn Dress How a stretchy, nubby bodycon dress with aughts-era Limited Too vibes became the post-pandemic go-to splurge.
By Allison P. Davis
what we know 10:43 a.m.
A Seventh Officer Has Been Suspended After Tyre Nichols’s Death: Updates The officer was relieved of duty the same day the five officers charged with murder were fired for the beating.
celebrity babies 10:24 a.m.
So What Did Adam Levine and Behati Prinsloo Name Their Baby? We’d all like to know.
health 10:00 a.m.
How Our Definition of Healthy Fails Black Women What I’ve learned in my years as a dietitian.
spring fashion 8:00 a.m.
The Laundress Was Supposed to Be the Nice Detergent Until people started breaking out into hideous rashes.
By Emilia Petrarca
power Yesterday at 7:24 p.m.
Marilyn Manson Accused of Sexually Assaulting a 16-Year-Old Girl In a statement from his attorney, Manson denied allegations he sexually assaulted the minor in 1995.
hairy situations Yesterday at 3:46 p.m.
Wait, So Now Even My Hair Is Aging? Ugh.
documentaries Yesterday at 1:31 p.m.
‘For So Long, I Had Larry in My Ear’ In an exclusive clip from Hulu’s Stolen Youth docuseries, Larry Ray survivor Felicia Rosario opens up about the impact of his gaslighting.
keeping up with the royals Yesterday at 12:37 p.m.
Could the Spice Girls Get Harry to the Coronation? Sources are saying the palace is “super keen” to get “Britain’s biggest girl band” involved.
sparking joy Yesterday at 11:00 a.m.
Marie Kondo Has ‘Kind of Given Up’ on Being Neat Validation for messy homes everywhere.
transgender rights Yesterday at 10:59 a.m.
Utah Bans Gender-Affirming Care for Trans Youth Already this year, Republican lawmakers have proposed more than 150 bills limiting the rights of trans people.
spring fashion Yesterday at 8:00 a.m.
The Promise of Pyer Moss Kerby Jean-Raymond was one of fashion’s most celebrated young designers. Then what happened?
By Tahirah Hairston
spring fashion Yesterday at 8:00 a.m.
It’s Glo Time Grammy nominee GloRilla is figuring out how to be famous while staying F-R-E-E.
By Tirhakah Love
spring fashion Yesterday at 8:00 a.m.
The Hustle of Women in Hip-Hop Editor-in-chief Lindsay Peoples on launching the celebration of 50 years of women in hip-hop who’ve changed the game.
By Lindsay Peoples
how i get it done Yesterday at 7:00 a.m.
How Political Commentator Molly Jong-Fast Gets It Done “We’re a pretty sedentary bunch, but we do a lot of dog-walking. Also, I try to visit my mom once or twice a week depending on how guilty I feel.”
sex diaries Jan. 29, 2023
The Creative Director Getting a Little Tired of Feeld This week’s sex diary.
More Stories