The designers showed their spring 2018 collection at Disneyland. 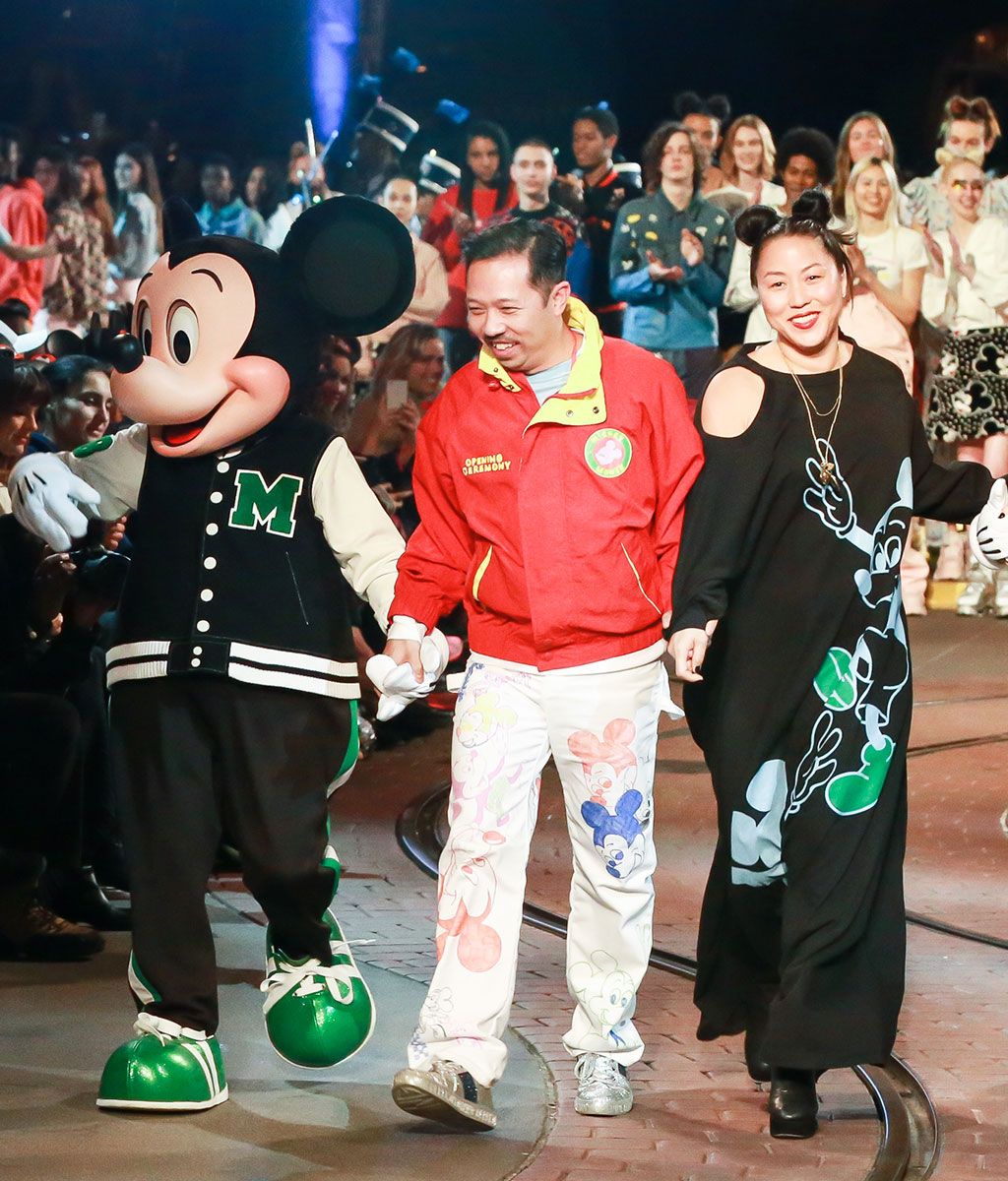 Welcome to happiness. It’s not your own, but you can visit. It’s Disneyland, where Opening Ceremony is showing their spring 2018 clothing collection for humans in Toontown. “WELCOME TO THE HAPPIEST SHOW ON EARTH!” It’s both introduction and instruction.

Before their show starts, the Opening Ceremony brain trust, founders Carol Lim and Humberto Leon, provide each seat with a Mickey Mouse cap. The Mickey ears are a litmus test about vanity, silliness, and group-think. Choices are highly revealing. Some people put on the hat, some keep them on laps like pets, some stuff them under their seats, some people hook them to fanny-packs used as shoulder bags. Chance the Rapper placed his Mickey ears over his signature 3 hat. Truly, the man has no outer limit to his sense of joy.

Wearing either too many or two few items of clothing is signature to the cartoon universe: Donald Duck’s shirt with no pants, Mad Hatter’s whole layering system. It’s part of the play. One party guest in a white suit has gloves that are big Mickey hands. He is dancing every time I see him. Humberto, I learned, wore a Mickey Mouse tie and cummerbund to his senior prom. At the show, Maya Rudolph’s purse is a flattened 2-D crescent moon. Clothing-as-sight-gag abounds.

Augmented ears and giddy ambiance lends a high quality of eavesdropping at this party. I overhear Laverne Cox say it’s her first time in Disneyland. I sidle on up, because it’s my first visit too, and I tell her I learned this from loitering in her orbit. “Eavesdropping is lots of fun!” she says. We have two things in common. “You have to be careful what you say around whom, though,” she warns, “sometimes I get real candid in the Lyft and sometimes the drivers might spill cheese. There is not a partition in the Lyft. Driver roll up the partition please,” she sings. Then she tells me she hates roller coasters, and that’s the end of what we have in common.

Disneyland has many modes of transport: roller coasters, monorails, useless cars, various boats. They are, at 10 p.m. on a Wednesday, filled with models like Lucky Blue and notables like Diplo and regulars like me. At one point, the captain of a tiny board tells me that people can enter a magical world one of two ways: “Pixie dust or down a rabbit hole.” The Opening Ceremony show asks, why not both? Wear glittery Birkenstocks and furry red coats – you never have to choose just one.

Opening Ceremony’s spring clothes aren’t limited by their Disney references, though the mice and the Disney font appear on several Opening Ceremony items. Many other items, the designers note, are “inspired by the poet Adrienne Rich’s ruminations on the relationship between humans and the environment.” These shirts and dresses come in reasonable light blues. There are solid and swooshy white cowboy boots. Knits. I’m informed these clothes reflect the “optimism of the 1970s.” The ’70s may or may not have been a time of optimism, but I do agree that everything is optimistic in Disneyland.

Cartoons, for example, never die. They are notable for their ability to move through time and space with surreal buoyancy. Look around the park: Here is Mickey, as an old-timey brass statue emerging from a fountain in the play-town square. Here he is, on a sweatshirt. Here he is, remixed by Kingdom into a chillscape soundtrack with a swishy beat. If you would like a ’70s Mickey, Carol recommends the “Mickey Mouse Disco” record. Her favorite track is Donald’s “Macho Man” homage, “Macho Duck”. My favorite is “Mousetrap”.

During the show, some models have hair hoisted into Mouse-like ears and a Minnie-reminiscent bow. Others have bursting color shades around their eyes. They are quickly forgotten, because when the actual Mickey and Minnie prance down the runaway, all sense of decorum exits Toontown.

Minnie makes a flirtatious stop in front of the seat of an encouraging model, Shaun Ross, who is directly across from me. It takes me a little too long to realize that this means that when Mickey comes to flirt with the audience, he will pause in front of me. I am very cool and react by sticking out my tongue and laughing. It’s dignified and certainly my best choice. I am, actually, reminded of Adrienne Rich’s “Planetarium”: “I am bombarded yet/I stand”.

+Comments Leave a Comment
This Is What a Runway Show at Disneyland Looks Like
culture 8:06 p.m.
Ammonite’s Romance Is Duller Than a Pile of Rocks The lesbian period drama should have had more kissing and fossils.
shopping 6:47 p.m.
The Cut Gift Guide: What Our Editors Are Giving This Year Cozy pajamas, fun puzzles, and plenty of booze make for perfect presents.
By the Cut
the undoing 6:43 p.m.
Could My Exceedingly Charming Spouse Be A Secret Psychopath? And other Undoing questions answered by two therapists.
advent calendar 2020 5:44 p.m.
Gift of the Day: A Pretty, Breathable Mask A practical but stylish gift for our times.
By Diana Tsui
collaboration station 5:31 p.m.
Japan’s Most Popular Comedian Designed Bags for Kate Spade The brand collaborated with Naomi Watanabe for the holidays.
screen time 4:31 p.m.
I’m Buying Freaky Candles to Ward Off Winter Dread And other unhinged home goods I found online this week.
keeping up with the royals 4:23 p.m.
Prince Harry Mistaken for Normie Christmas Tree Worker Welcome to the real world, buddy.
always shopping 3:34 p.m.
The 16 Best Combat Boots for Women Leave your house shoes inside.
niche drama 1:25 p.m.
This Meatball Merch Drama Is *Chef’s Kiss* The Meatball Shop reportedly filed a lawsuit against Jersey Shore stars Snooki and Deena for their new meatball-themed merch.
florals 1:07 p.m.
Florals Did Used to Be Groundbreaking Dior’s newest book is all about the designer’s special relationship with flowers.
culture 12:24 p.m.
What to Watch After You Binge The Crown In case you really need more royals-related content.
celebrity couples 12:15 p.m.
Show Me a Better Fairy-Tale Ending Pumpkin and Harris (both otters) were heartbroken after the deaths of their partners. Then their sanctuaries had them try online dating.
hot bod 10:40 a.m.
This Is How I Trick Myself Into Morning Workouts There’s a treat that goes with everything, even crack of dawn exercise.
they seem cool 9:00 a.m.
This Fashion Designer Who’s Always Serving a Full Look Meet Pissy Pussy.
By Devine Blacksher
sexual harassment 8:30 a.m.
‘I’ll Take Your Mask Off and Stick My Tongue Down Your Throat’ Sexual harassment has long plagued the restaurant industry. Amid the pandemic, workers say it’s gotten even worse.
fashion Yesterday at 5:52 p.m.
Chanel Had a Show Just for Kristen Stewart A theory about why.
underneath your clothes Yesterday at 5:46 p.m.
The Best, Prettiest Lingerie We Could Find Online Whether you want sexy, sweet, or super affordable.
By the Cut
tastemakers Yesterday at 3:17 p.m.
The Influencer Who Makes CBD for Fashion People Courtney Trop, also known as Always Judging, talks about her newest project.
tv Yesterday at 3:11 p.m.
The Real Housewives of Salt Lake City Is Completely Bonkers Bravo’s newest Housewives show already has some of the wildest moments in the franchise.
next level Yesterday at 2:53 p.m.
The Artist Whose Canvas Is Her Own Face  Madrona Redhawk is doing something entirely new with makeup.
By
More Stories