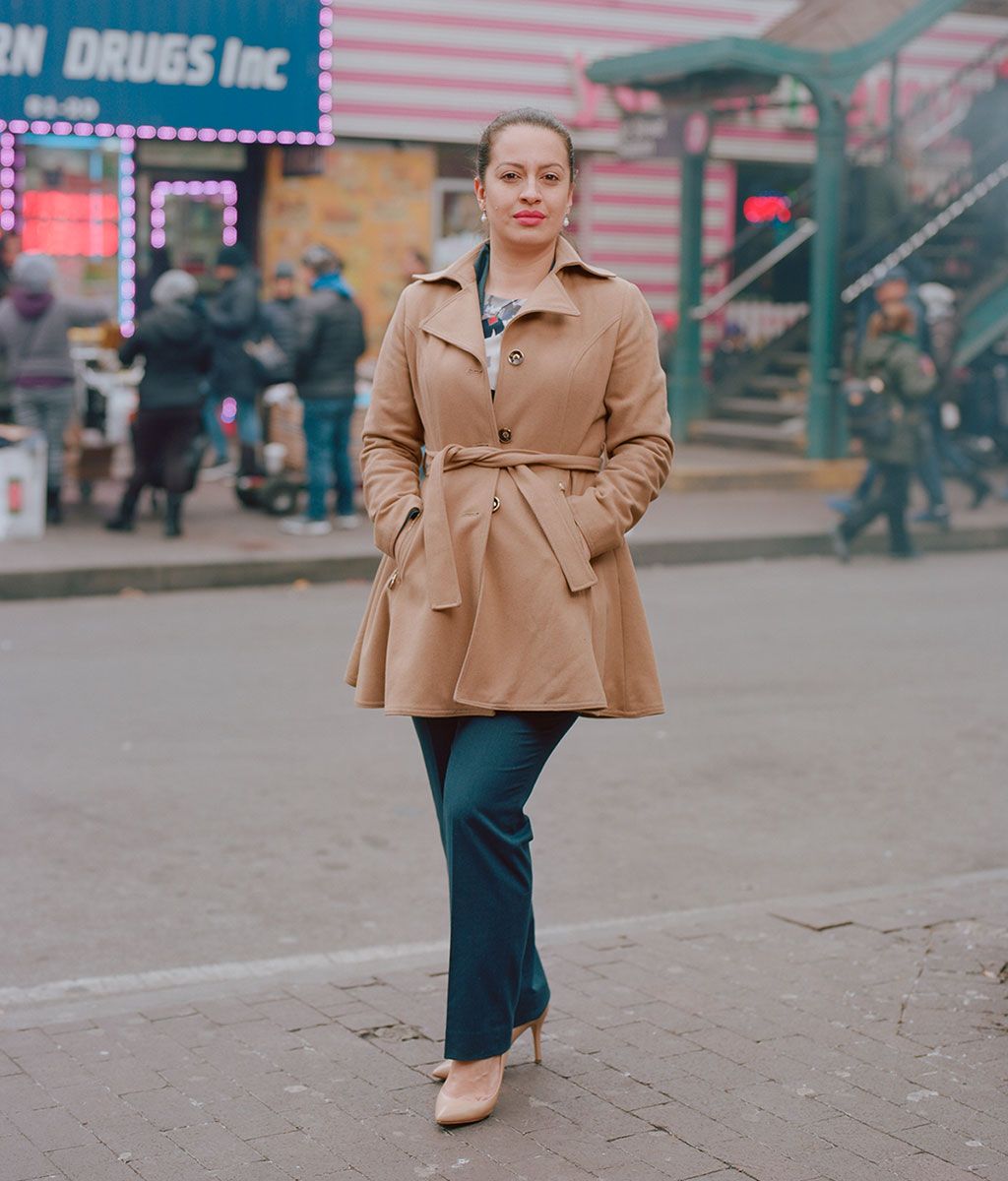 “I’m a punk when it comes to pain,” admits Catalina Cruz. “I’ll cry from a paper cut.” These are not sentiments one would expect from someone entering the pummeling world of American politics, but Cruz is currently standing in front of the Queens establishment where she got her ears pierced 24 years ago. She peers through the window at the baubles on display before continuing on, her rain boots making a muffled clomp on the sidewalks of Jackson Heights — one of several neighborhoods that comprise District 39, the vacant Assembly seat of which Cruz hopes to fill after the primary election this September.

Cruz, who became a U.S. citizen in 2009, is currently the first Dreamer to run for office in New York state; if she wins, she will be the third Dreamer to ever take office in this country (after Wendy Carrillo of California and Ruben Kihuen of Nevada). In 1992, at the age of 9, she boarded a plane in Medellin, where she could see Pablo Escobar’s jail from the sidewalk of her childhood home. She arrived at JFK accompanied by her single mother, wearing her favorite outfit — a “pant situation with a shirt that had too many ruffles; it was not cute” — and carrying a tourist visa set to expire in six months. Growing up, this stretch of 82nd Street is where she came to tap into the Colombian community vibe. First stop: Las Americas Bakery, established in 1976 but since closed, never again to grace the world with their buñuelos. Then there’s the butcher across the street that currently sells not meat but empanadas. And, just up the block, the construction site where a teenage Cruz saw Blade and Charlie’s Angels in the movie theater that used to be there. It’s now slated to be a Target. “I think it does something to the soul of the district,” Cruz says. “You’re not going to get empanadas at Target.”

Our ultimate destination is the corner of 82nd and Roosevelt Avenue under the elevated 7 train where, during her first few years in New York, Cruz’s mother handed out restaurant fliers for around $40 a day. Just last week, Cruz saw a woman on that very corner doing that very thing, and she couldn’t help but stop and talk to her. “She told me she’s Ecuadorian. She told me she does this Monday through Friday, 9 to 5, and they pay her $13 an hour, which is above minimum wage.” Cruz raises an eyebrow. “She’s doing this for an immigration attorney, so you would hope they’re going to pay her at least minimum wage, but she still can’t make ends meet.” The woman’s name was Rosa, which also happens to be Cruz’s mother’s name.

Daniel seems to like that idea. He tells her he’d like help with the prostitutes on his block. “Mucha suerte!”

She turns back to me with a smile. “He lives in the district, so you gotta get voters where you can!”

As an undocumented worker, Cruz’s mother cleaned offices, sold tamales, and took her daughter with her to collect cans in parts of Queens where she hoped they wouldn’t run into anyone they knew. Cruz remembers struggling to buy a gallon of milk and learning English by watching ER (“So we can blame my lack of accent on George Clooney. Will that get me an endorsement from him and Amal? I’m just saying!”). It wasn’t until her grandmother died — and they didn’t go back to Colombia to bury her — that Cruz understood what her immigration status really meant: in order to stay in America, she could actually never leave. “I have a friend who calls it ‘The Hispanic Panic,’” she says. “But it was a real thing for me” — especially after her brother and two sisters were born with American citizenship. “I always felt like I have to do everything I can not to get deported so that I’m never separated from them,” Cruz says. “I’d take care of the kids while my mom was cleaning offices at night, and I used to think, ‘What if something happens and she doesn’t come home?’”

Thanks to a helpful guidance counselor (who informed her that CUNY was granting undocumented students in-state tuition), an American high-school sweetheart (who proposed while she was still studying at John Jay, and whom she married in 2003), and an immigration lawyer (who helped her apply for citizenship pro bono), Cruz attended law school as an American citizen and with the intent of helping families like her own. Then one day, on a recommendation from Judge Jenny Rivera, she got a call from the office of Cuomo, then Attorney General, asking if she’d be interested in an internship. That position turned into another with Cuomo’s civil-rights bureau, which turned into a job as counsel in the division of immigrant affairs at the Department of Labor (fun fact: she implemented IDNYC), which led her back to serve as director of (now Governor) Cuomo’s Exploited Workers Task Force. She finally landed as chief of staff for New York council member Julissa Ferreras-Copeland, whose resignation in 2017 ultimately led to the reshuffling that’s left the 39th District Assembly seat open. City council member Danny Dromm  — an important mentor and Jackson Heights neighbor — told Cruz she should run. “It was not a road I was expecting,” she tells me, “but these seats rarely open, so I kind of did a gut check. I went and asked my mom, and her reaction was, “Did we go through everything we went through for you to decide to be mediocre now?’” Today, she says, her job is “being the candidate.”

Her platform — including the old standbys of affordable housing, better schools, more reliable transportation — builds on a legacy that could be pretty accurately summarized as ridding the city of assholes (or, as Cruz puts it: “starts with “a,” ends with “holes”). She’s gone after “notario fraudsters,” who charge exorbitant prices for phony immigration advice. She helped get ICE out of Rikers, where undocumented immigrants were being deported before they’d been proven guilty of whatever crime led to their arrest (“There can’t be double punitive repercussions for simply being arrested”). And she’s fought labor trafficking and employers engaged in the sort of wage theft her own mom experienced.

Cruz is also one of a slew of women — and especially women of color — whose runs, collective and individual, are a way to give the legislative middle finger to President Trump. “I mean, if we have to say his name, yes, number 45,” she says, that eyebrow on the rise again. In fact, Trump’s ascendency has in some ways been constructive, leading Cruz to finally go public with her story of being undocumented and providing a clear counterpoint to her own campaign. “It’s helped me show people the need for progressive leadership and gain support from unlikely places,” she tells me. “Look at what he did during his State of the Union speech, where he was basically equating MS-13 with every Latino immigrant and using the very real pain of two families losing their children to gain some sympathy for his stance.” And when he said that Americans were Dreamers too? “I wanted to throw my shoe at the TV. ”

As Trump continues to attack DACA and tout his wall, Cruz continues to canvas the neighborhoods of Queens. “On the day of the election, I realized that half of the country hated me and everything I stood for,” she says. But her work should resonate in District 39, where almost half of the population is foreign-born, over 100 languages are spoken and, come to think of it, it’s not entirely implausible for empanadas to make it onto the menu at Target. In the meantime, Cruz’s mom is on her way to becoming an American. “I was able to petition my mom when I became a citizen,” she says, proudly. “And it was because of my ability to petition for my mom that our family’s still together. So when Trump talks about ‘chain migration,’ I am that family reunification. I am that family.”