Stormy Daniels Is the Anti-Trump 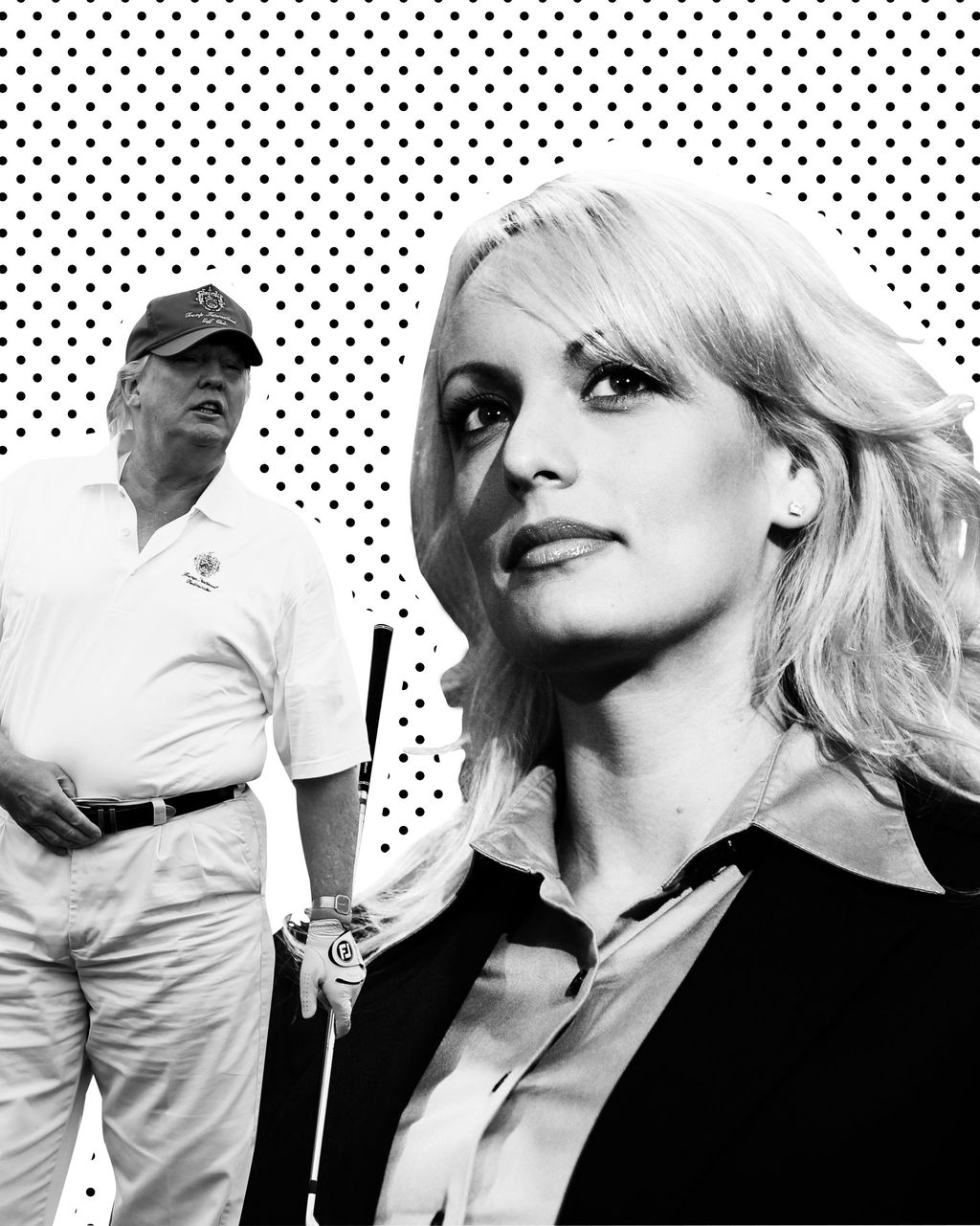 Behold: Out from the chaos, lies, secrets, and misdirection of the Trump administration has emerged a figure of bracing honesty, clarity of purpose, even purity: Stormy Daniels — perhaps the one adversary who could take down this presidency.

Daniels and Trump have much in common. Both are theatrical creatures: He was a star of reality television, she is a star and director of adult films. Both have highly constructed, artificial appearances: hair obviously colored, visible makeup. Her extravagantly enhanced bosom finds its analog in his outrageously inflated comb-over. Both have used stage names: Daniels was born Stephanie Clifford and Donald Trump has, in the past, gone by the pseudonym “John Barron” when impersonating his own publicist. And both are at home in the world of erotic entertainment, where female sexual allure is a commodity to be assessed and purchased.

But there is one important difference between them: Stormy Daniels’s artifice is utterly forthright, all tools of a trade she neither excuses nor disavows. As a performer, Daniels pretends for a living. And her particular form of pretending involves sex, which is generally a domain considered private, even secret. But Daniels makes no secret of her profession. On the contrary, she speaks about it with frankness and a disarming, self-ironic wit: “When someone says, ‘Hey, you’re a whore … ’” she told CNN, “I’m like, That is ‘successful whore’ to you!”

Daniels’s honesty extends beyond the topic of her profession. In the past, she was candid about the relationship she had with Donald Trump, and now she is candid about her desire to overturn, via litigation, the nondisclosure agreement intended — along with the famous $130,000 payment — to keep her silent, to “hush” her.

Daniels is not suing for money, but for the right to speak, to “un-hush” herself. She has even offered to return the original $130,000. Does this make Stormy a martyr to truth? Not exactly. She has openly acknowledged the financial benefits of her association with Trump, which has sent her popularity and appearance fees soaring: “I would be a fucking idiot to turn [the money and opportunities] down,” she told Rolling Stone. “We live in a capitalist society. Show me one person who would say no.” Surely Donald Trump would agree.

Stormy’s apparent candor in a situation involving this administration and money feels oddly refreshing amid the ever-mounting and highly convincing clues that Trump and his family may consider the presidency little more than the ultimate grift, a prime opportunity for lavish and, above all, secret self-enrichment.

If Trump and company are guilty of profiteering, they are doing everything to keep their greed under wraps, as so many secrets that we can only hope Robert Mueller will soon (please, God) unveil. But Stormy admits her willingness to make money (in her case, legally) via this presidency. And not only does she make no bones about her interest in monetary gain, she is aiming to profit, specifically — and ironically — by refusing to be one of this administration’s secrets. In other words, she represents a double rejection of secrecy.

That her secrets have to do with sex makes the irony even sweeter, for Trump seems to have a long history of forcing or paying others to keep the secrets of his sexual activities — whether they occurred inside or outside the bonds of marriage, in Russian hotel rooms, pageant dressing rooms, consensually or, as at least 19 women have claimed, forcibly.

We Americans have a curious relationship to sex: We are both prudes and voyeurs, enshrouding sexual matters in secrecy and shame while producing a pop-culture universe steeped in porn and extreme raunchiness. Recent months have proven just how harmful this dichotomy is: After all, would we need a #MeToo movement if we had a more organic, less prurient relationship to sex? Perhaps, if sexual matters, especially sexual malfeasance, were not so easily kept in the shadows and relegated to powerful men’s “personal lives,” maybe colleagues and employees would be more forthright in calling out transgressions — and women would have less to fear.

Trump has benefited from such a no-go zone of privacy all his life, in matters of sex and so much else as well. All around him, we see a vast cadre of the hushed: people likely paid, bullied, or otherwise maneuvered into silence or mendacity on his behalf — lawyers, congressmen, spokespersons, wives, children, campaign officials.

This feels especially true for the women of Trump world. The president, as we know, likes to surround himself with “professional beauties”: ex-models, like all three of his wives, as well as his daughter and the recently exiled Hope Hicks; actresses; or former beauty queens — poker-faced women who rarely speak or perform any notable function beyond being decorative, and whose appearance lends a stagy, artificial quality to otherwise “real” situations.

Consider the women who do speak, too, such as Sarah Huckabee Sanders, Kellyanne Conway, or the babbling Betsy DeVos. As with the men in Trump’s orbit, their words seem so disconnected from truth, or even logic, that speech itself winds up evacuated of all meaning. In this way, even these “talking” women too are effectively hushed — by the ceaseless lies they speak on Trump’s behalf.

Into this came crashing Stormy Daniels: a professional beauty right out of the pages of a glossy lad magazine who must have seemed to Trump a perfect addition to his harem of the hush-able. Fittingly, when they met, at a Nevada golf tournament in 2006, Trump, wanting probably to impress and display Stormy, took her for a ride around the course in his Escalade golf cart — repurposing her as a kind of living hood ornament — a trophy woman for a trophy vehicle.

But if he thought Daniels would just ride along prettily until he was done with her, and then retreat into silence, Trump misjudged the situation. Daniels, a champion equestrian, does not enjoy being a passive passenger. “I was fine with saying nothing. But I am not fine with being bullied into lying, or being bullied at all,” she told Rolling Stone. And so, Stormy defiantly refused to remain the silent commodity or secret indulgence of a rich man. In effect, she jumped out of that Cadillac golf cart. What’s more, Daniels would never have been one to be muzzled about a sexual encounter. Sex for her is not a shameful secret.

That’s right: In response to a fallen man’s sins of the flesh, his breaking of his sacred marital vows, the Christian right resorted to …golf metaphors.

A mulligan is a minor golf “cheat” — a makeup shot not listed on the score card, an indulgence kept secret. The Stormy Daniels affair, which by rights should provoke moral outrage in devout Christians, got downgraded to a golf mistake. That this reveals profound hypocrisy is obvious. But it also reveals that Perkins wanted to speak Trump’s language, to show that he too was a man of the world, accustomed to golf courses and country clubs. By extension, Perkins was also demonstrating that he might know something about Trump’s other expensive pleasures too. Even a “family values” supporter, it turns out, is susceptible to the lure of a porn-star affair, willing to wink clubbily — and perhaps longingly — at the peccadillos of his pack’s alpha dog.

But Stormy Daniels won’t allow herself to be turned into a secret, an object, a lying toady, or a golf joke. In Daniels, Trump has more than met his match. Like him, she wields the power of theater, but unlike him, she seems to have nothing to hide. In her salty talk (she told In Touch magazine she could easily describe Trump’s “junk”), her wit, her business sense, and most of all her refusal to be quiet and go away, there’s a brash feminism to Daniels. She resists even the high-minded distaste of the many mainstream journalists who insist that her story is secondary to matters of campaign finance law or legal agreements. (We’ll see what Anderson Cooper does with her soon.)

Daniels knows that she’s the story. That everyone is interested in her and all the dirty details, whether they admit it or not. She shares that kind of assured narcissism and feel for the carnivalesque with Trump. And this is why Daniels may be the only gladiator who has a chance right now in the ring with him.

Un-hushable, un-secret, and unashamed, Stormy Daniels — gloriously authentic for all her inauthenticity — may yet be the ray of sunlight we need, the one who exposes enough of Trump’s iniquity for the tide to turn. An antidote. The anti-Trump.

Stormy Daniels Is to Trump As Trump Is to America

+Comments Leave a Comment
Stormy Daniels Is the Anti–Donald Trump

crime 3:23 p.m.
R. Kelly Has Been Sentenced to 30 Years in Prison “The public has to be protected from behaviors like this,” a judge told the singer.
in sickness and in health 2:40 p.m.
Travis Barker Has Been Hospitalized He’s reportedly being treated for pancreatitis after a recent colonoscopy.
celebrity 2:14 p.m.
Lauren Conrad Reveals She Had an Ectopic Pregnancy “I wanted to share my own experience with lifesaving reproductive care.”
abortion 1:25 p.m.
Meghan Markle Calls On Men to Be Vocal About the End of Roe In a new conversation with Vogue, she spoke about the devastating impact of the SCOTUS ruling.
shopping 1:17 p.m.
What to Expect From the Nordstrom Anniversary Sale Deals incoming.
skin kare 1:08 p.m.
Kim Kardashian Is Being Sued Over SKKN A Black-owned beauty brand filed a suit alleging copyright infringement.
wedding etiquette 1:00 p.m.
The Bride and Groom Formally Request That You Dress Up The tyranny of wedding dress codes.
By Kayleen Schaefer
are u coming? 1:00 p.m.
You’re a Star on thecobrasnake.com! “It feels like 2007 again.”
By Brock Colyar
rtw fall 2022 12:54 p.m.
Liberated From the Fashion Grind, Marc Jacobs Finds a New Tension On Monday night, Jacobs showed a collection deeply in touch with the digital world.
By Cathy Horyn
edgy haircuts 12:13 p.m.
No, Bella Hadid Didn’t Shave Her Head Here’s how she actually got that Marc Jacobs look.
career 12:00 p.m.
‘Do I Have to Tell My Boss I’m Going to Rehab?’ No, you don’t. But can we talk about why you’re asking?
By Ana Marie Cox
scandale 11:59 a.m.
Is the Queen Beefing With Her ‘Favourite’ Cheese? She is reportedly thinking about revoking the royal crest from her preferred cheddar over a local environmental calamity.
launches 11:19 a.m.
June Had Some Really Good Beauty Launches From new Pat McGrath to Murad, these were our tried-and-true favorites.
best in class 9:30 a.m.
The 13 Very Best Plush Mattress Toppers A plush topper can be the icing on a mattress cake, one expert tells us.
By The Editors
5 questions with... Yesterday at 5:10 p.m.
Taraji P. Henson Wants to Move to Spain, Italy, or the South of France “Yeah, ’cause … I don’t know about this place anymore.”
celebrity Yesterday at 5:04 p.m.
Chris Pratt, Noted Bible Quoter, Says He’s Not Religious “I’m not a religious person,” says the man who posts Bible verses on Instagram.
gone sale-ing Yesterday at 4:15 p.m.
Ulta Beauty Is Doing a Sale It’s Never Done Your favorite hair products are on sale thanks to its Summer of Hair Love Event.
maxwell trial Yesterday at 2:42 p.m.
Ghislaine Maxwell Sentenced to 20 Years in Prison The judge ruled that Maxwell “directly and repeatedly and over the course of many years participated in a horrific scheme” of sexual abuse.
life after roe Yesterday at 2:40 p.m.
Major Retailers Are Rationing Morning-After Pills Purchase limits on Plan B are the latest ripple effect of the SCOTUS ruling overturning Roe.
gone sale-ing Yesterday at 2:22 p.m.
Your July 4 Sale Shopping Guide That NuFACE you wanted? It’s on sale.
More Stories