Talk to Me Boy

I love conversations with my son, even if he doesn’t really hear me. 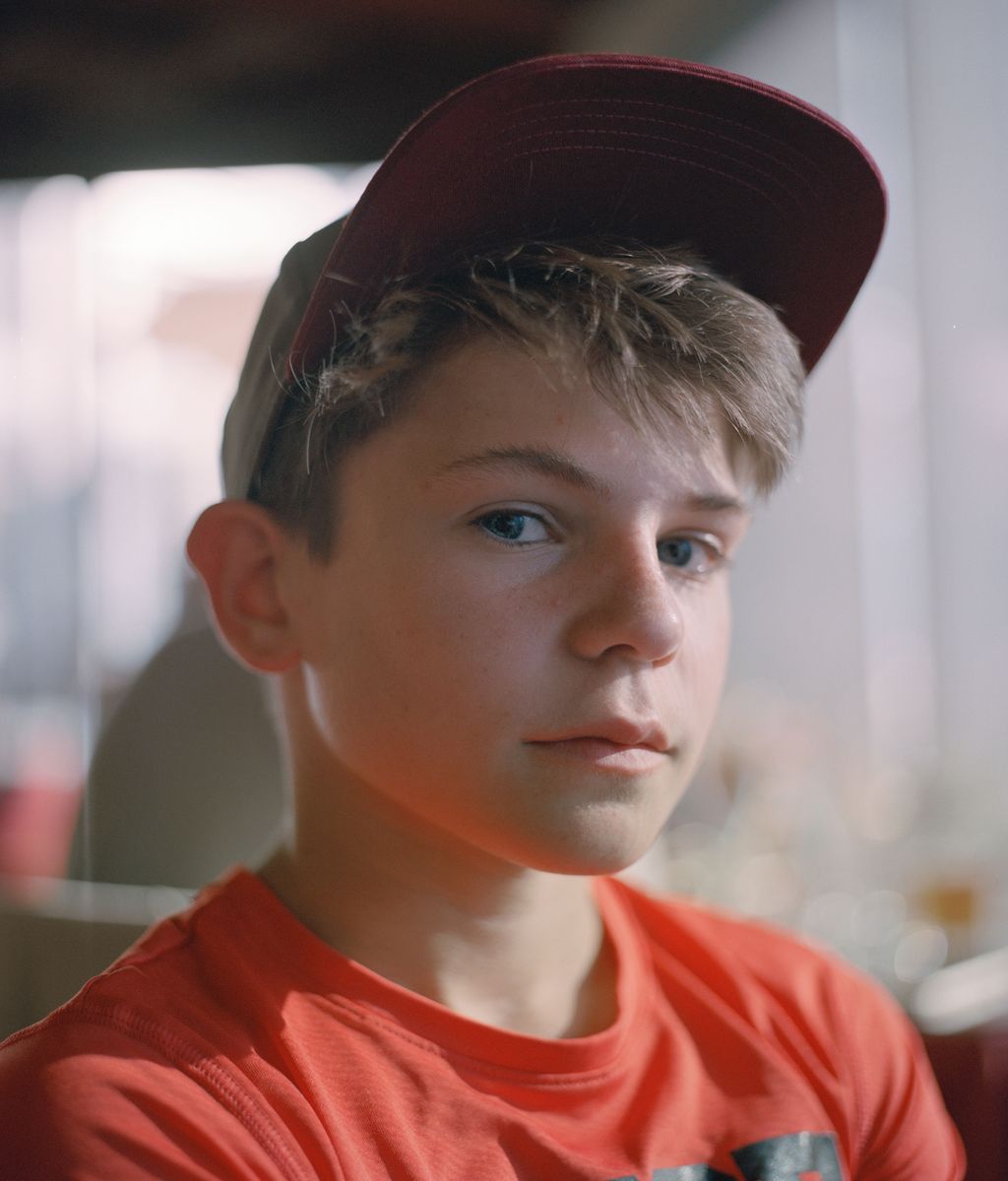 How to Raise a Boy is a weeklong series centered around this urgent question in the era of Parkland, President Trump, and #MeToo.

It’s so easy to get it wrong, talking to my son. Who wants to talk to their mom at 13? Priming the pump for a good, long conversation turns into a delicate calibration. He has to be in the mood, and he has to sense he’s safe from my flights of judgment. But I can usually get him talking if I can convince him to separate from our family of five and run an errand or go for a walk. Occasionally he seeks me out in a quiet corner of the house while I’m folding laundry. That’s when I know he’s got something to work through. If I’m patient with him I am rewarded with the questions, complaints, and fears of boyhood — a psychic and physical terrain so unfamiliar to me that I feel part anthropologist, part therapist, part ferocious mama-lion wanting to avenge, fix, and study him in equal measure.

The specifics of these conversations matter less than the tone — in fact, when we recently went back and tried to recall the exact words of one of our talks, we couldn’t. Sometimes we start to chat lightly, but as we relax, the stories become more frank, and full of dangerous behavior. We’ll talk about how he and his friends try to get onto the top of tall buildings or how classmates are trying weed for the first time. He’s told me about how his friend watches a lot of porn and always wants him to look. He’ll recount a party or a drama with the girls in his grade. I suspect he tells me stories about other people as a way to describe things he’s dabbling in.

What Should I Teach My Sons?
Teenage Brothers on Sex, Social Media, and What Their Parents Don’t Understand
What Aggression Really Means to Boys

I remember trying to process ethical questions with my parents by pretending I was talking about other people when I was really talking about myself. I would sometimes say things just because I needed to hear my mom and dad’s moral response. Listening to my own son, it’s not always clear to me if that’s what he needs or if he just wants to vent. But I find that I get frustrated with my son for his recklessness, and worried for his body. As a girl my parents were concerned about harm to my body but not that I was a danger to myself physically — the conversations were more about how to avoid physical harm inflicted by others. Meanwhile my son and his friends torture each other for fun.

The inherently unknowable things about being a boy present a challenge for me. After my son came home with a black eye, I was asking my husband to explain to me how our son could stay friends with the kid who hit him. He tried to console me by saying I probably just didn’t understand how much boys suffer the violence of each other. I think the word he used was “brutal.” By contrast, when it comes to the routine psychological warfare our daughter’s friends wage upon each other, I feel totally prepared to coach her. I am a champ at navigating wounds of words — but the bruises on my son actually frighten me. When he showed me a video of his friends playing a game where they all throw their heavy backpacks at one kid on a swing till he falls off, I wanted to stop him from leaving the house ever again.

At the same time I live in dread of what one of my colleagues once described to me as the “silent years.” The ages of 14 to 18 when sons descend into an impenetrable muteness. My co-worker described, with palpable joy, that his son was emerging from that phase — and how painful it had been on the mother when her once-talkative boy stopped listening or seeking her advice. Keeping that in mind I try not to take it for granted that I’ll get another chance to talk to him.

When I recount to fellow parents some past conversations I’ve had with him, I tend to only share the ones that I think I nailed. But my guess is that most of the time our sons tolerate us at best and tune us out at worst — what we think was a teachable parable, likely elicited an eye-roll emoji in his next group text. But maybe over enough time some of the things we want to communicate will make it through. I’ve long ago resigned myself to the idea that no matter what I say he will hear it only partially.

*A version of this article appears in the March 5, 2018 issue of New York Magazine.

What Should I Teach My Sons?

+Comments Leave a Comment
I Keep Talking With My Son. Are We Hearing Each Other?

See All
ugg x feng chen wang Apr. 16, 2021
The Perfect Shoe for Your Perpetually Cold Feet Ugg collaborated with designer brand Feng Chen Wang on a hybrid sandal-boot.
the body politic Apr. 16, 2021
Mazie Hirono Isn’t Afraid of Conflict A long talk about anger with the gloriously foulmouthed senator from Hawaii.
By Rebecca Traister
recommendations Apr. 16, 2021
The 17 Best Butt Plugs You Can Buy Online According to experts.
a beautiful life Apr. 16, 2021
Venus Williams Wants You to Learn From Her SPF Mistakes Talking to the tennis champ about inclusive sunscreen and her second sun-care launch.
By Erica Smith
obits Apr. 16, 2021
Helen McCrory, Peaky Blinders and Harry Potter Actor, Has Died at 52 She also had a prolific stage career, appearing in over 25 productions since 1990.
screen time Apr. 16, 2021
What Do We Do With Bad Clothing Memories? Unearthing spring clothes brings up a lot of other stuff, too.
tv Apr. 16, 2021
Carrie’s Best Boyfriend Is Coming Back for the SATC Reboot Aidan will appear in “quite a few” episodes.
fashion Apr. 16, 2021
The Problem With Lena Dunham’s Plus-Size Collection Black women are so influential in this space. Why pick her?
By Kendra Austin
tastemakers Apr. 16, 2021
The International DJ Who Wears Whatever She Wants Sita Abellán doesn’t limit herself.
power Apr. 16, 2021
One of the Cops Who Killed Breonna Taylor Got a Book Deal Facing intense backlash, Simon & Schuster has announced it will no longer be involved in the distribution of the book.
friday sales Apr. 16, 2021
17 Things on Sale You’ll Actually Want to Buy: From Patagonia to Soludos Including lots of on-sale spring dresses.
hot bod Apr. 16, 2021
‘This Is the Week People Are Getting Back in Shape’ Advice from the experts on how to take it slow.
mass shootings Apr. 16, 2021
8 Killed in Shooting at FedEx Warehouse in Indianapolis At least five other people had been hospitalized with injuries, including one in critical condition. Police said the gunman killed himself.
¡hola papi! Apr. 16, 2021
‘I’m So Jealous of My Hot Friend’ We can learn to look at ourselves in such a way that we see someone worthy of love, happiness, and affection.
By J.P. Brammer
police shootings Apr. 15, 2021
What We Know About the Police Killing of Adam Toledo Newly released body-cam footage shows that the 13-year-old boy had his hands up when he was shot.
oops Apr. 15, 2021
A Woman Called Animal Control on a Croissant Classic mistake.
style Apr. 15, 2021
FIT Hosted Its First-Ever Sustainability Awards The event honored “Changemakers in Fashion.”
hairy situations Apr. 15, 2021
The Woman Behind Meghan McCain’s Hairstyles Speaks Talking to the mastermind who created all those glitter parts, space buns, and genie ponies.
By Erica Smith
celebrity Apr. 15, 2021
Not Everybody Appreciates Those House of Gucci Set Pics The Gucci family is “offended” and “truly disappointed” in the biopic’s styling choices.
the future Apr. 15, 2021
Wild Speculation: A Series About What Comes Next What we’ll take with us when the pandemic ends.
By the Cut
More Stories