This weekend is the 90th Academy Awards, meaning that there have been 90 years of bold, talented actresses and ensuing great lipstick looks. The Cut combed through decades of photos to find the most iconic and best lip looks of the Oscars ranging from reds to nudes to dark tones. Unfortunately, our search had to skip over black-and-white and go straight to color photos, but in some cases, we were even able to track down the exact lipsticks actresses wore on the red carpet. From Audrey Hepburn to Diana Ross to Winona Ryder, here are the best lipstick shades of all time.

The ceremony was televised in black-and-white, but Grace Kelly’s nude-pink lipstick was maybe the first memorable instance of lip color at the Oscars.

This bold red that had the Twitterverse asking, “What color lipstick is Margot Robbie wearing?” You can still buy the exact formulation now.

The year that Madonna channeled bombshell ’50s beauty and Marilyn Monroe with a fur, glittery dress, and true blue-red lipstick, when she was nominated for Best Original Song for “Sooner or Later.”

A fresh orange-coral lipstick that stood out among the nudes and reds, and didn’t clash with Emma Stone’s green-gold gown.

It’s rare to see a dark lip color on the Oscars red carpet but this dark berry shade on Kerry Washington looked luscious and rich.

Yes, you can buy the exact same lipstick Angelina wore (which happens to be one of MAC’s most legendary and cult shades of all time) for less than $20.

A satiny red lipstick that modernizes, yet perfectly complements her 1920s-inspired gown.

A “my lips but better” lipstick shade that would look great on those with darker skin tones.

Leave it to Lady Gaga and her longtime makeup artist Sarah Tanno to find a shade of red that matches her earrings and her rubber gloves.

One of my personal favorite red-carpet beauty looks of all time is striking yet romantic. Yellow is one of the most difficult colors to complement (yellow nail polish is the worst-selling shade across all polish brands), but makeup artist Angela Levin chose a perfectly balanced red shade that isn’t too pink, red, or blue. 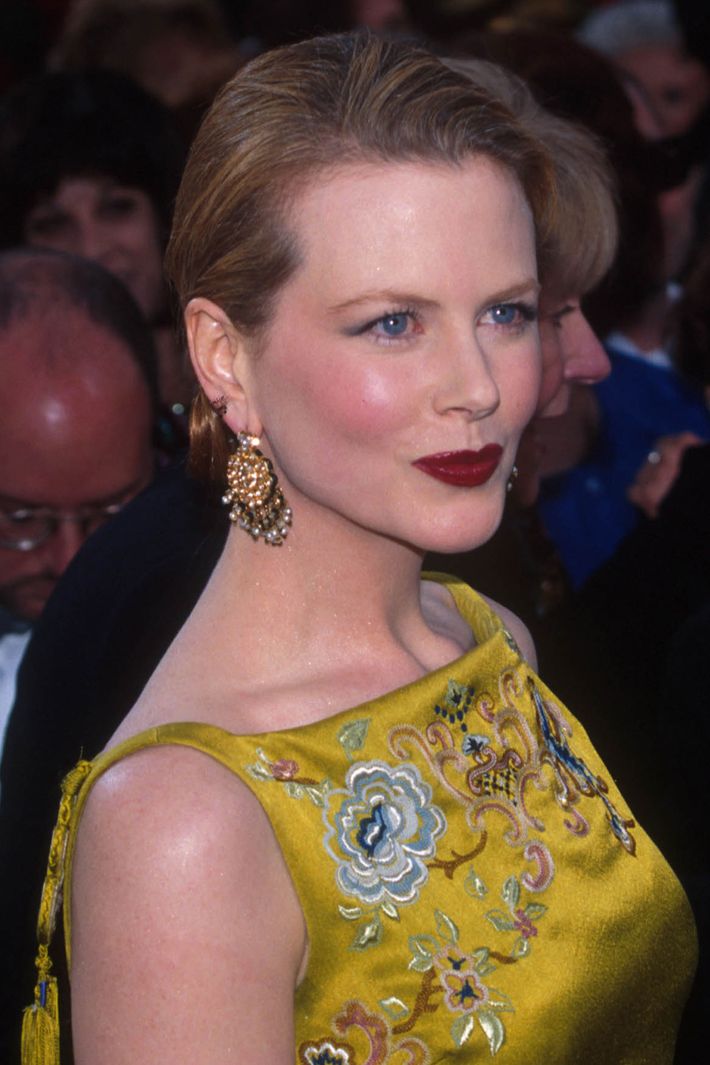 What lipstick color goes with chartreuse, a color so unusually pretty that Joan Rivers joked that the color made her “puke”? Legendary makeup artist Kevyn Aucoin knew and picked just the right shade of brick-red to go with Kidman’s Galliano.

Coral meets coral without being too matchy on Audrey Hepburn in a Givenchy dress.

A classic red that wouldn’t look out of place today.

Maybe you were disappointed and thought her Oscars makeover was a betrayal, but Love’s makeup, non-smudgy lipstick, and coiffed hair at the Oscars was the beginning of new era of style and self-presentation for the musician and actress.

A ’60s take on “my lips but better” (or a little more nude) when Streisand won her award for Funny Girl.

A great-looking brown-red lipstick that complemented Houston’s glow and her white pantsuit.

Maybe she and Michelle Williams wore the same lipstick color in 2006, but it looks great on both of them. 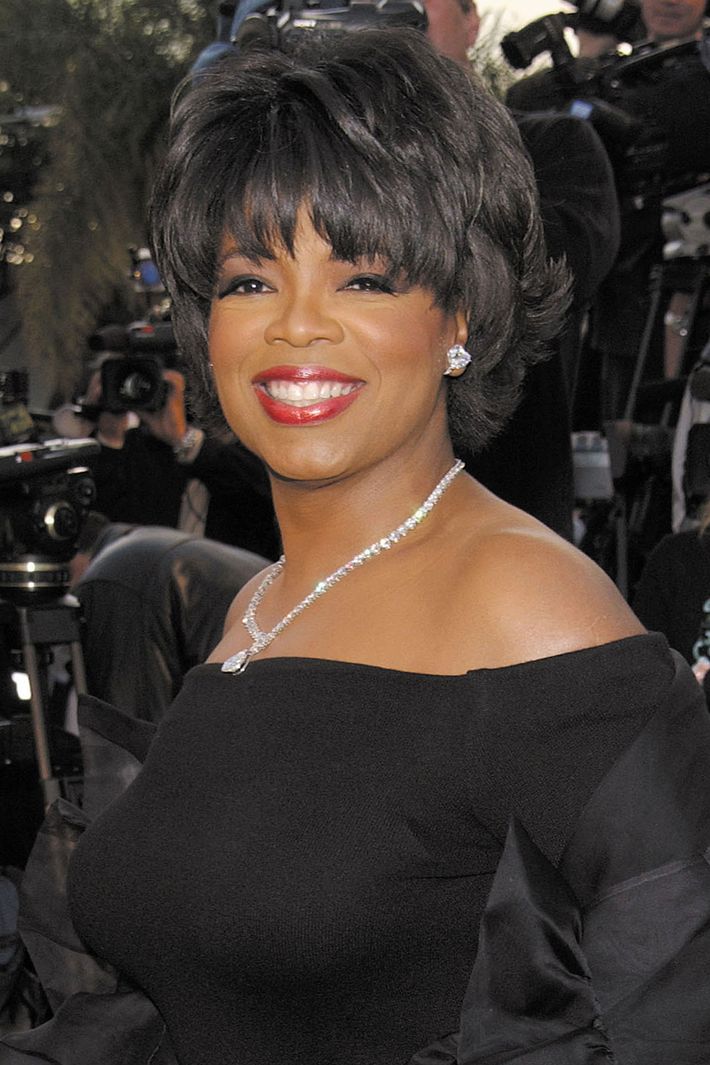 I’m not sure what’s shinier: Oprah’s diamonds, her smile, her skin, or this satin demi-red lipstick.

A very ’90s plum-brown shade that I hope Drew recreates for her Flower Beauty line.

Cher smartly knew that most people wouldn’t be looking at her lipstick and chose a mauve shade.

Another great “my lips but better” option in a blush shade that makes Adele’s lips look full and luscious.

Stone knows that even at the Oscars, sometimes all you need is a crisp white shirt and lipstick.

An almost shockingly pale pink lip color that adds to the glamorous ’60s feel of the contoured cheeks and sooty lashes.

It’s a bit of a throwback look, but Ross’s sparkly, fuchsia, and frosted lipstick was pretty fabulous for its time.

Dewy and bombshell are two words that aren’t part of Rooney Mara’s beauty look. This is a beautiful, borderline goth red that looks smooth as velvet, without reading as retro.

You can’t blame Basinger for holding onto the ’80s, with the swoopy, side-parted teased hair and the red lipstick, even at the beginning of the ’90s. Besides, if Fall 2018 Fashion Week was any indication, the ’80s are back.

Blue is a surprisingly tricky color gown for the red carpet. Go too red on the lips and it reads too red, white, and blue, whereas pink can make it seem sweet. Makeup artist Nick Barose smartly bridged the gap by using a nude-rose shade, with a slightly brown undertone. To make sure the look lasted through Nyong’o’s entire award-winning night, he traced Chanel Aqua Crayon Lip Colour Stick in Brown Copper (now sold-out) in the corners.

A barely-there lip color that doesn’t take away from Monáe’s personal shine or the shine of her Jennifer Behr headband.

The Oscars beauty look that spurred millions of Pinterest tutorials on fishtail headband braids and the answer to what pink but not overly feminine lip gloss looks good with a California tan.

Little did Hathaway know that her Chanel lip color (Chanel Rouge Coco Lip Colour in Rivoli, no longer available) was going to be working overtime in her hosting gig with James Franco.

A dark raisin lip that shows not only how white Davis’s teeth are, but how strong and beautiful she looks.

Stone wore a different lipstick shade for each of the hundreds of appearances she made promoting La La Land, but saved the vampiest and most classic one for last.

Another fantastic, natural-looking lip shade for the Oscars “my lips but better” hall of fame.

huh! 9:58 a.m.
Ghislaine Maxwell Reportedly Offered Yoga Lessons in Prison A letter written by a fellow detainee characterized the convicted sex offender as “genuine and kind.”
life after roe 9:30 a.m.
How to Protect Yourself When Seeking an Abortion Learn your legal risks and take control of your digital privacy.
life after roe 9:30 a.m.
How to Get Help for Your Abortion The abortion mutual-aid network getting patients the funds, travel, and child-care assistance they need.
life after roe 9:30 a.m.
Don’t Trust the DIY Abortion Advice You See on TikTok These are the risks involved.
life after roe 9:30 a.m.
How to Have a Medication Abortion Where to find the pill and what to expect.
life after roe 9:30 a.m.
The Crisis Pregnancy Center Trap And how not to fall for it.
celebrity Yesterday at 5:45 p.m.
Jodie Sweetin Won’t Let Police Brutality Stop Her From Protesting The actor spoke out about the viral video of police pushing her to the ground during an abortion-rights protest.
celebrity Yesterday at 5:11 p.m.
Machine Gun Kelly Reveals He Attempted Suicide in New Documentary He was on the phone with Megan Fox at the time.
power Yesterday at 3:50 p.m.
Everything to Know About the WNBA Star in Russian Custody After her months in detention, Brittney Griner’s trial will begin on July 1.
the bigger picture Yesterday at 3:15 p.m.
Thirty Years of Community — Not Cops or Corporations — at the Dyke March Scenes from this weekend’s anniversary march in New York City.
By Melissa Kravitz Hoeffner
jussie smollett Yesterday at 3:12 p.m.
What Was Jussie Smollett Doing at the BET Awards? The star, who was found guilty of staging a hate crime in 2019, appeared on Sunday’s red carpet.
celebrity Yesterday at 3:08 p.m.
Ireland Baldwin Opens Up About Her Abortion “I chose me, and I would choose me again.”
celebrity Yesterday at 1:34 p.m.
Ben Affleck Is Looking for Reasons to Be Stressed Why else would he let his 10-year-old son get behind the wheel of a Lamborghini?
budgeting Yesterday at 1:00 p.m.
This Wedding Season Is Going to Cost You Budgeting for someone else’s big day.
By Emma Turetsky
why? Yesterday at 12:20 p.m.
Alec Baldwin Has Taken It Upon Himself to Interview Woody Allen This seems like a bad idea, but carry on.
brooding Yesterday at 12:00 p.m.
What Even Is a Resilient Child? An unexpected Instagram exchange made me consider how growing up with social media affects kids.
bet awards Yesterday at 11:27 a.m.
Jazmine Sullivan Wants Men to Talk About Abortion Too Presenters at the BET Awards were outspoken about the loss of Roe — but the men were noticeably silent.
gone sale-ing Yesterday at 10:00 a.m.
Tatcha Lovers, It’s That Time of Year Again All its products are on sale, but today’s the last day!
how i get it done Yesterday at 7:00 a.m.
How Pro Wrestler and WWE Superstar Bianca Belair Gets It Done And a message to the Rock: You need to put her in your next movie.
By Jane Starr Drinkard
astrology June 26, 2022
Madame Clairevoyant: Horoscopes for the Week of June 27 Early Tuesday morning, Neptune retrograde begins. For better or for worse, you’ll have to reckon with the world as it actually is.
By Claire Comstock-Gay
More Stories