An extremely tone-deaf T-shirt has set off one massive controversy in the world of opinionated, Instagram-loving fashion influencers.

At the center of the drama is Yoyo Cao, a Singapore-based fashion influencer who Instagrammed a photo of the first T-shirt her fashion label, Exhibit Store, has ever launched: a white shirt with the phrase “fuck what they say” and a gun motif in the upper left corner.

The image of a gun is particularly jarring right now, at a time when people across the world are demanding gun control in the aftermath of the horrific school shooting at Marjory Stoneman Douglas High School in Parkland, Florida. Those who came to Cao’s defense claimed that she wasn’t being insensitive because she lives in Singapore, and therefore, she might not be familiar with the America-based anti-gun-violence movement.

But those who defended her were up against a handful of high-profile opponents. One of her most well-known critics was fashion influencer Tina Craig, better known as Bag Snob, who was quick to attack — via comments, replies to comments, and even her Instagram story. 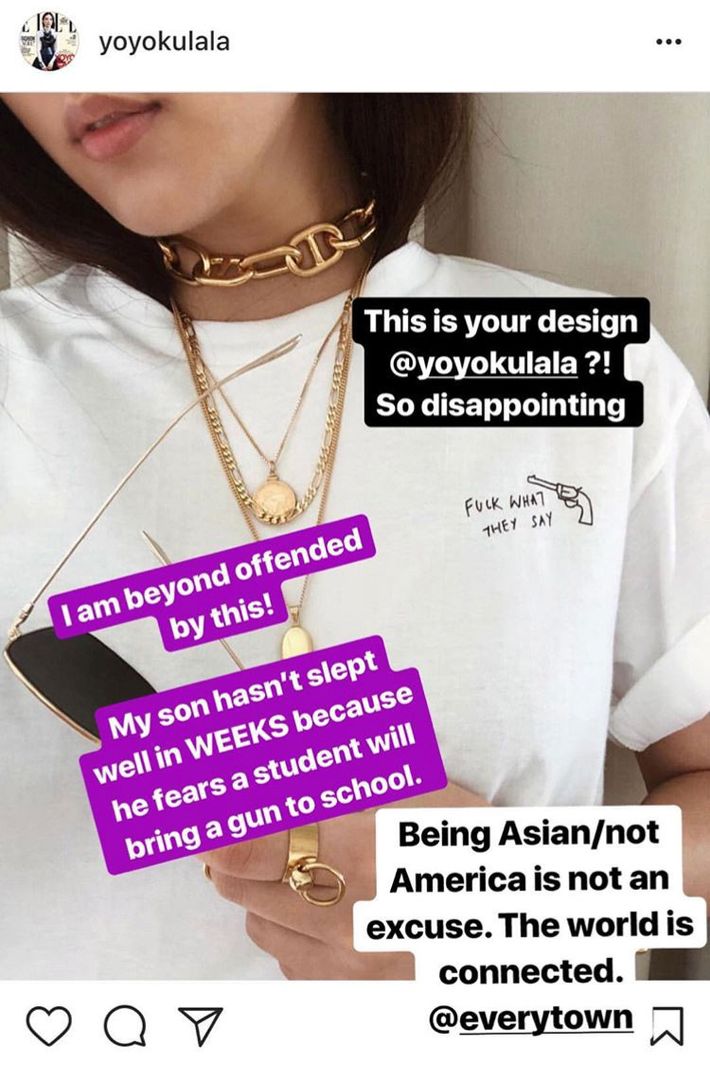 She included a photo of Alyssa Alhadeff, a 14-year-old victim of the Stoneman shooting. 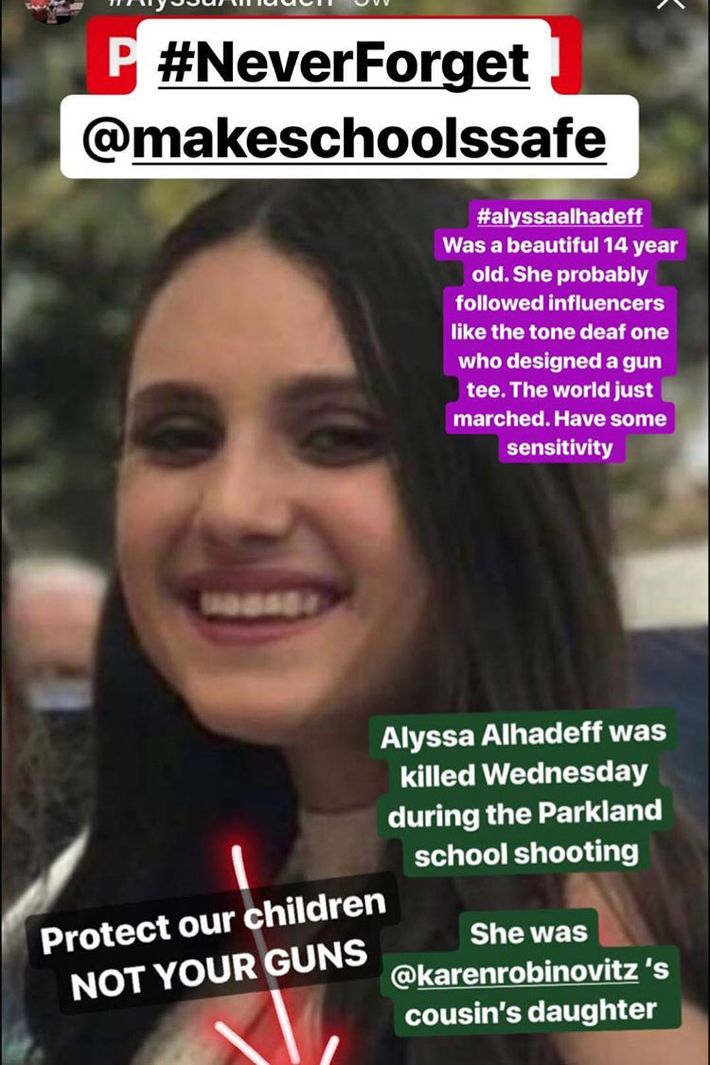 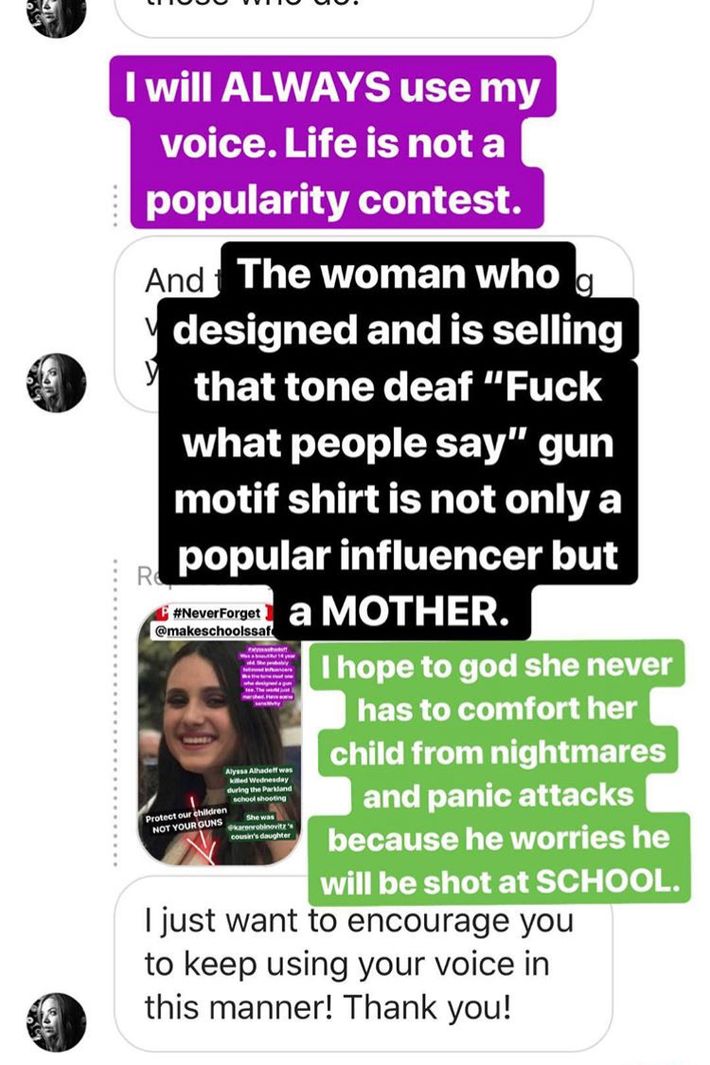 She also posted a photo of her young son to her story, claiming, “he’s worried about being killed at school.” 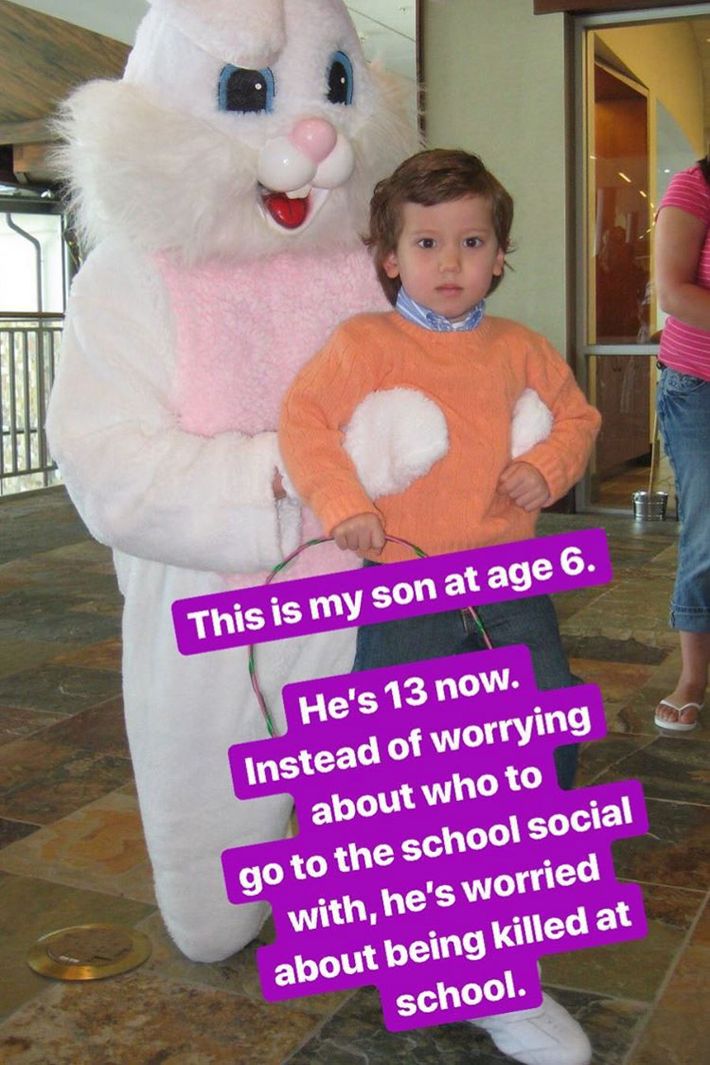 While Craig was one of Cao’s most vocal critics, she was far from the only.

Street-style star Nasiba Adilova echoed the above sentiments. “This is so terrible and insensitive!” she wrote.

Even Housewife Lisa Rinna got involved at some point, because of course she did, and she didn’t mince words. “You must be confused when it comes to this it is not fuck what they say. I’m hoping you don’t know what the fuck you’re doing and it’s a big fat mistake,” she wrote.

Despite the numerous attacks, Cao has not deleted the photo, apologized, or even responded at all — though she has continued to post to her Instagram story, without a single mention of the T-shirt.

Update, March 30, 2018, 7:32 a.m.: Cao has issued an apology on her Instagram story, writing, “an image on a T-shirt is not something to joke about. Promoting violence was never our intention.”

sex diaries 26 mins ago
The Vermont Woman Who Blows Off Work for a Tinder Date This week’s sex diary.
society pages 2:01 p.m.
Chaos Reigned at Art Basel A surge of outsize egos descended on Miami in the name of art (?) last week.
By Marlowe Granados
gone sale-ing Dec. 2, 2022
10 Things You Don’t Have to Pay Full Price for This Weekend Deals from Neiman Marcus, Farfetch, Sephora and more.
art basel Dec. 2, 2022
Suchi Reddy Actually Likes Art Basel for the Art Her latest installation was inspired by the Miami clouds.
are u coming? Dec. 2, 2022
Art Basel Was Made for Madonna And I’m almost too hung-over to write this dispatch.
By Brock Colyar
5 questions with... Dec. 2, 2022
Meet the Black Woman Who Built a 15-Year-Old Fashion Business Sherri McMullen’s Oakland luxury store is one of a kind. Here’s how she did it.
art basel Dec. 2, 2022
Pharrell, Gigi Hadid, and More of the Bestest Party Pics This Week Celebrating with Fendi, Saint Laurent, and more.
uvalde Dec. 2, 2022
What We Know About the Police Response to the Uvalde Shooting A class-action lawsuit by survivors against law enforcement asks $27 billion for “indelible and forever-lasting trauma.”
celebrity couples Dec. 2, 2022
Finally, the Good Morning America Romance We Deserve Amy Robach and T.J. Holmes are now New York royalty.
friday sales Dec. 2, 2022
22 Things on Sale You’ll Actually Want to Buy: From Alex Mill to Star Wars And a flower-shaped cat fountain that Strategist readers love.
celebrity Dec. 2, 2022
Nia Long Is Not Happy With the Celtics In her first interview since the Ime Udoka scandal broke, the actress said she was disappointed with how the NBA team handled things.
always shopping Dec. 2, 2022
17 New Year’s Eve Outfits That Aren’t Sparkly Yes, it is possible to wear something other than sequins.
fashion Dec. 2, 2022
What to Know About the Balenciaga Ad Scandal The fashion house is under fire for two separate campaigns that consumers say promote child exploitation.
yikes Dec. 2, 2022
Rebel Wilson, We’re Confused Her new loungewear collection isn’t size-inclusive … at all.
are u coming? Dec. 2, 2022
At the Eagle With the Sniffies Zaddy One long night with the founder of the sluttiest gay cruising app.
By Brock Colyar
extremely online Dec. 2, 2022
I Can’t Shut Up About This Giant Teddy-Bear Man Meet “Loving Bear Puffy,” a stuffed toy the size and shape of a human man.
2022 fashion year in review Dec. 2, 2022
The Dad-ification of Fashion The “dad vibe” is all about comfort, function, and nonchalance, like an outfit you just threw on to run to Lowe’s.
always shopping Dec. 2, 2022
Yes, Socks Are a Great Gift You don’t have to worry about sizing and it can make or break an outfit.
5 questions with... Dec. 1, 2022
Ayesha Curry on Holiday Planning, Comfort Foods, and Her Healing Hut She’s teamed up with Bloomingdale’s to make the holidays easier.
keeping up with the royals Dec. 1, 2022
Will and Kate’s Big Night Out (in Boston) The Prince and Princess of Wales received mixed reviews at a Celtics game on Wednesday.
More Stories