Tattoos: They sure are permanent! And the paperwork doesn’t come with an Are you sure — like, really sure? checkbox above your signature.

When it comes to regrets, there are typically two camps among the tattooed: those who wish they never got that string of Smiths lyrics in college, and those who chalk up questionable ink to “a time in my life when I was really into Eastern philosophy and also jaguars.”

Here, seven women share the stories behind the tattoos they wish they had never gotten. 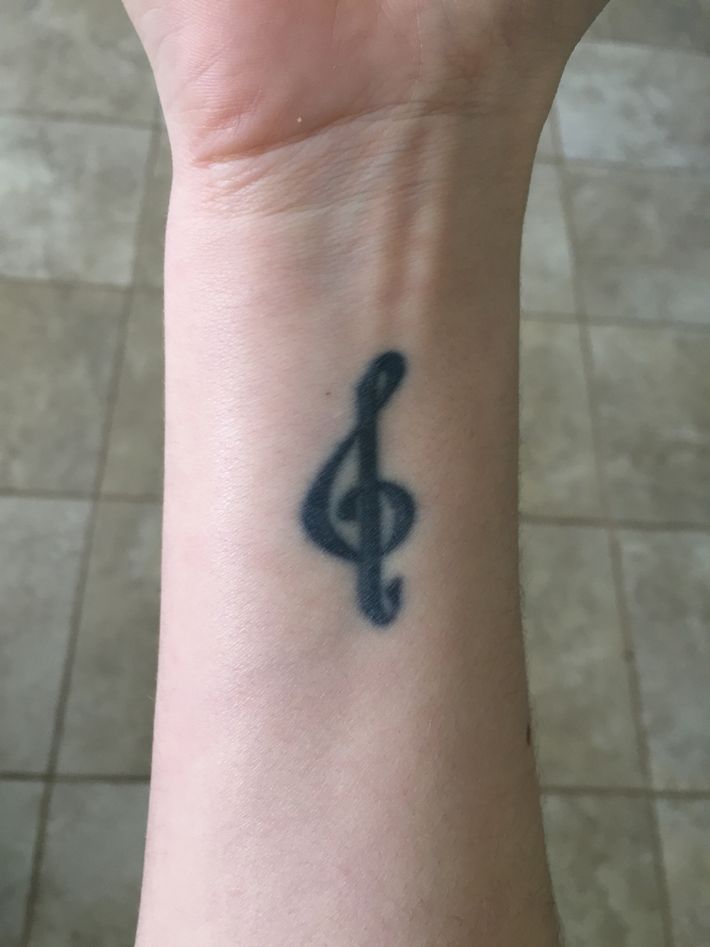 My first tattoo, which I got senior year of high school, is of a treble clef, and the tail is backwards. I told my sister I wanted it because “Music can solve it all,” which, fine. The artist asked me which way it went and I said, “IDK, which way should it go?” And he said, “I give tattoos, not opinions.” So we guessed, and it was wrong.

It’s on my wrist, so it’s just every professional acquaintance I meet who sees it. It’s kind of embarrassing, in the same way someone might be embarrassed by the fact that they used to wear pyramid belts in all seriousness — except that the pyramid belt is on your wrist, forever. I don’t necessarily regret it, but I wouldn’t do it again.

A Line from the Musical Hair 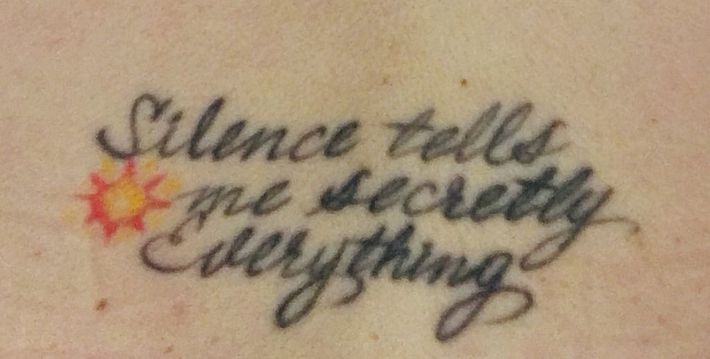 I got a back tattoo that has the lyric “Silence tells me secretly everything” from the musical Hair. I got it after getting bombed at brunch and crying to my friend about my recent breakup. I staggered around the Lower East Side and got righteously angry at my ex and decided those lyrics would be my middle finger to him, which makes no sense. 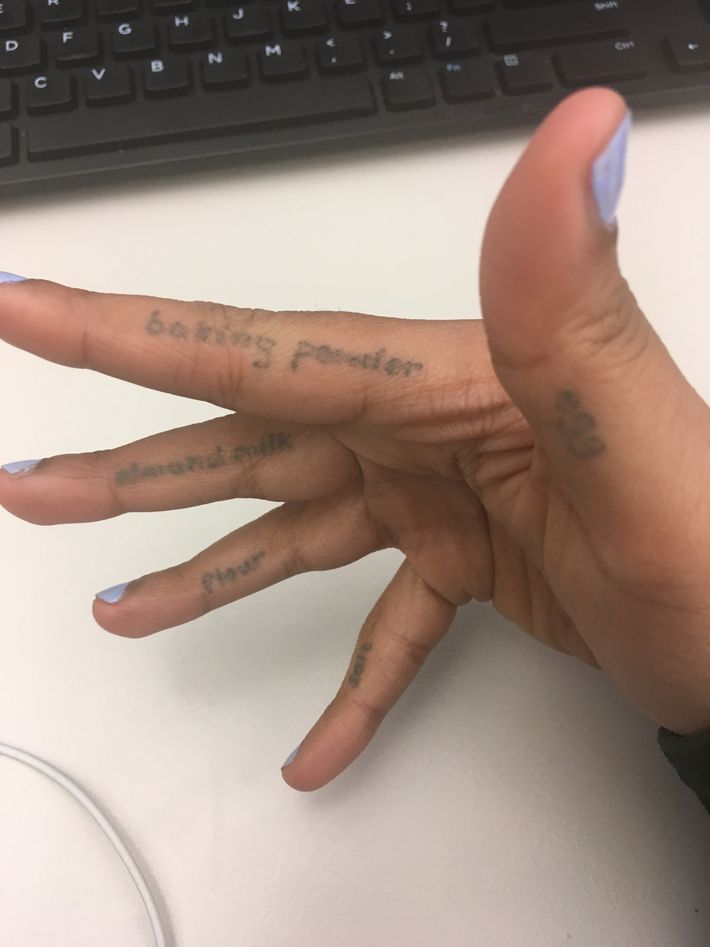 I have pancake ingredients listed out on my fingers, and while I don’t actually regret the tattoo itself — I can’t regret anything involving pancakes — I feel like I should have thought out the placement a little more. The placement of each is way more visible than the finger tattoo on my other hand, because they’re on the front-facing side of my fingers, which sometimes bothers me around more conservative family members.

Also, the most visible one is “baking powder” on my pointer finger, and I do wish I’d picked “almond milk” to go on that one (though I guess having “almond milk” on my middle finger does tell people that yes, I am That Bitch).

I added a sixth ingredient to my recipe a year after I got this tattoo, and obviously I don’t have a sixth finger to put that on. It’s not really a secret (it’s lemon juice and zest), but I guess by omission it’s become one. 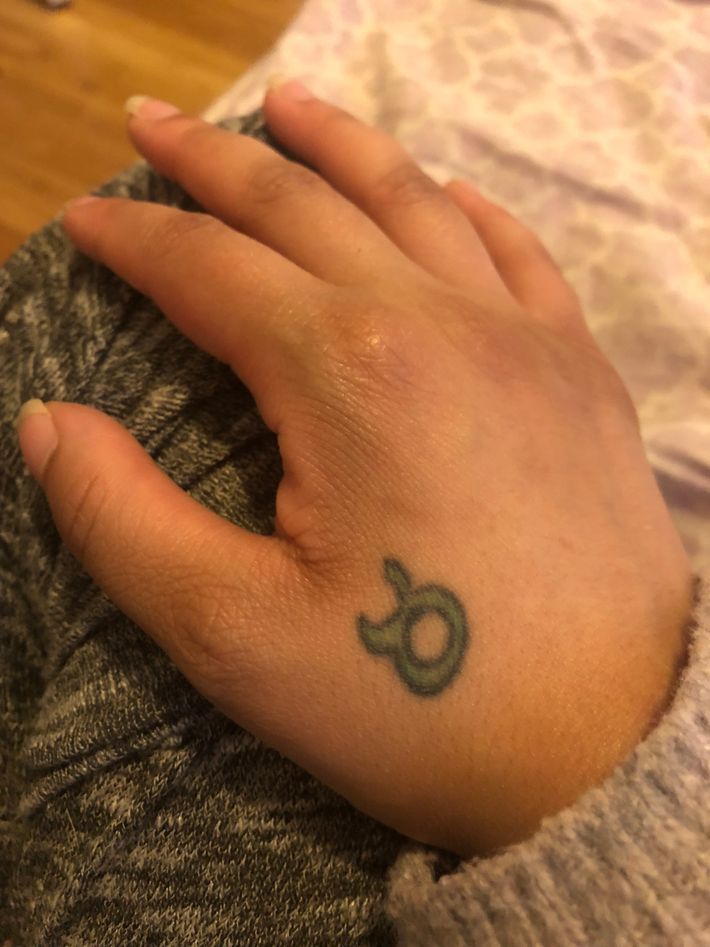 At first glance, what’s wrong with this tattoo might seem obvious: The horns are awkwardly asymmetrical (did you even realize they’re supposed to be horns? They are). The design is a Taurus symbol that, would you believe, is intended to look this weird. I picked it off a random Tumblr zodiac sign sheet (would not recommend), which is to say that I chose to have this thing inked on me. It was my fourth tattoo; I was maybe 19.

I didn’t choose the location (my hand, oy) though; since I couldn’t make up my mind, my best friend made it for me. (Don’t do that.) Also, the artist who did it smoked a bunch of weed before our session. You can probably tell.

By now, the green (emerald, for my birthstone) is faded and the line work is blown out and people probably think I’m in the Illuminati, so I don’t love it so much. Not sure I ever really did. I’ve since gotten a gorgeous do-over Taurus tattoo on my arm and I’ll be covering this bad boy up soon. Did I mention this was a Friday the 13th deal? You get what you pay for, kids. 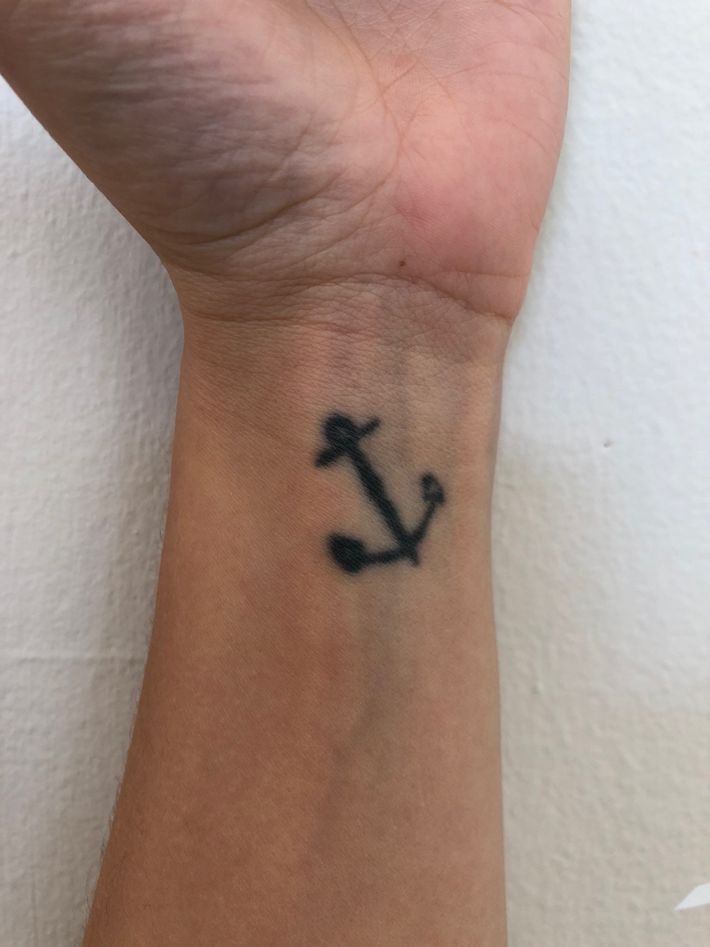 I’m almost proud of how dumb this tattoo is. In college, I had a lecture with a guy I was sleeping with. Every morning, I’d let him draw an anchor on my wrist with a Sharpie (this guy found me “tough”), and every afternoon, I went back to his dorm room with him. He eventually dumped me for a girl who lived on my hall, which I found out by running into him while taking out the trash. I responded by … permanently affixing this anchor on my skin.

“Basically a Big Black Oval with a Skin-Colored Leaf” 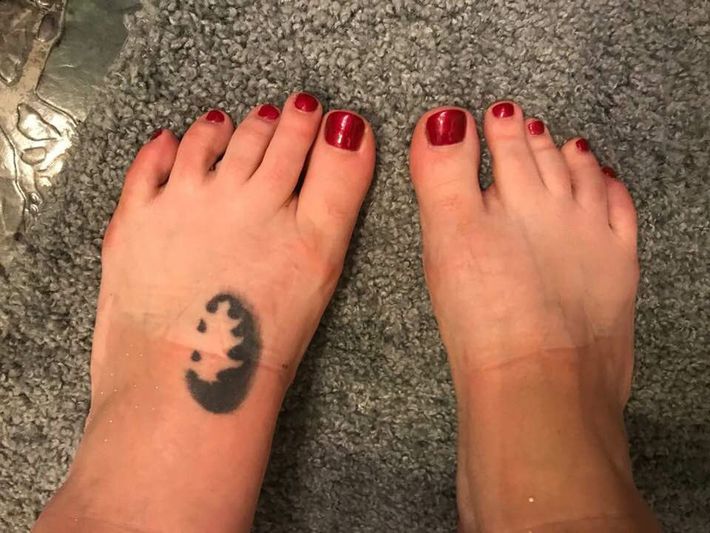 I have a negative-space leaf on my foot — it’s basically a big black oval with a skin-colored leaf in the center. I got it when I was 19 because I was itching to get a tattoo like all my other friends were, and because a guy I was really into designed it (giant eye roll — never get a tattoo just because you’re crushing on some dude).

Now I just kind of hate it. The artist didn’t do a good job, it doesn’t look good, and it doesn’t have any meaning or significance to me. Not only that, but after 15 years, I’m sick of people asking me what it is.

Something Not Quite Buddhist 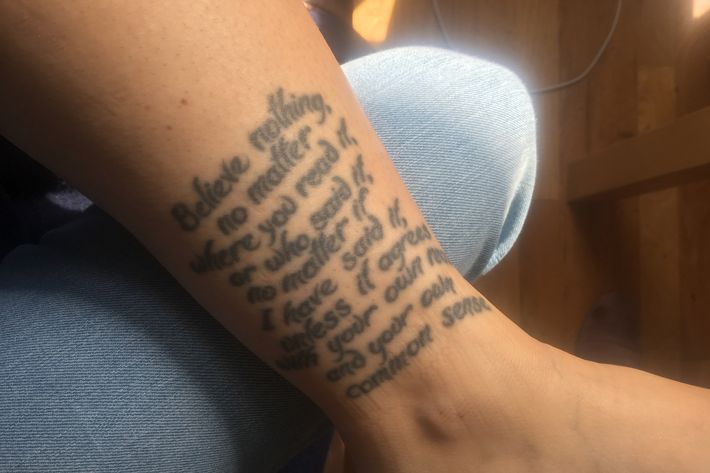 I got (what I thought was) a “Buddhist quote” on my ankle when I was 19 or 20 — it’s actually not a Buddhist quote and, in fact, an awful translation of the Kalama Sutta, so that’s cool. I got it because I was going through your typical trying-to-find-myself period in college, and just so happened to be doing a lot of yoga and smoking a decent amount of weed.

The placement, on my left ankle, is horrible. It’s a huge chunk of text that meanders around the bone. I’ve stopped reciting it to people when they ask what it says because it’s so long that I hate saying it out loud. I’m too lazy and afraid to have it removed, but have learned that Diorskin spray foundation makes for a great tattoo cover-up in a pinch.

+Comments Leave a Comment
7 Women on the Tattoos They Regret
style 11:36 a.m.
Hey Fashion Friend: Help! I’m About to Be So Sweaty There’s nothing wrong with sweating, but here are some tips for making it less uncomfortable.
celebrity 11:13 a.m.
Harry Styles Says Olivia Wilde Was ‘Very Helpful’ on Set He told Howard Stern he had “a wonderful experience” being directed by her in Don’t Worry Darling.
life after roe 11:00 a.m.
I, Too, Have a Human Form In Justice Alito’s draft opinion, the pregnant body is erased.

my two cents 10:00 a.m.
I Love My Teaching Job, But It Doesn’t Pay Me Enough Your options aren’t easy. But neither is squeaking by without enough money to do the things you want.
By Charlotte Cowles
motherhood 8:00 a.m.
A Model With a C-section Scar Is in the 2022 Sports Illustrated ‘Swimsuit’ Issue For the first time in the magazine’s 58-year history.
lawsuits Yesterday at 5:18 p.m.
Amber Heard Says She Thought Johnny Depp Would Kill Her A makeup artist explained how she covered Heard’s bruises.
shopping Yesterday at 5:05 p.m.
14 Brands Getting Plus-Size Swimwear Right Here’s where to shop.
closings Yesterday at 4:51 p.m.
Bye-Bye, Bite Beauty After a decade in business, the brand is shutting down.
"size inclusivity" Yesterday at 3:40 p.m.
Victoria Beckham Says Wanting to Be Thin Is ‘Old-Fashioned’ Then why does her line only carry dresses up to size 14?
the most fertile man Yesterday at 3:38 p.m.
Nick Cannon Says He’s Considering a Vasectomy “I ain’t looking to populate the Earth completely.”
power Yesterday at 1:35 p.m.
Fans Are Spending Thousands to See the Depp v. Heard Trial Some traveled cross-country, camping outside the Virginia courthouse for the chance to be among the trial spectators.
shopping Yesterday at 1:16 p.m.
17 Fisherman Sandals That Are Actually Cute No bait required.
sober questioning Yesterday at 12:00 p.m.
‘I Got Sober by Mistake — Can I Go Back to Drinking?’ That’s up to you. But give yourself credit: It wasn’t an accident, it was your choice.
By Ana Marie Cox
culture Yesterday at 10:08 a.m.
18 Books Our Favorite AAPI Writers Love Recommendations in celebration of AAPI Month from some of the Cut’s favorite writers.
health Yesterday at 10:00 a.m.
The Baby-Formula Shortage Keeps Getting Worse Anxious parents are navigating supply-chain issues, recalls, and rations.
the glow up Yesterday at 8:00 a.m.
Get Your Glitter Out: Party-Girl Chic Is Back Making the case for Y2K rebellion against “that girl” culture.
internet drama May 17, 2022
Bobbi Brown vs. a TikTok Influencer It all started with a video of Meredith Duxbury trying the new Jones Road What the Foundation.
q & a May 17, 2022
Christine Quinn Is ‘the B*tch Whisperer’ The reality star’s self-help manifesto, How to Be a Boss B*tch, is all about stepping into your (her?) power.
celebrity apologies May 17, 2022
Neil Patrick Harris Is Sorry About That Charcuterie Plate The actor apologized for serving a cured-meat display designed to look like “the corpse of Amy Winehouse” at a 2011 Halloween party.
father's day May 17, 2022
34 Best Father’s Day Gifts No Dad Can Resist A gift for every kind of dad.
More Stories