Risotto With a Side of Diamonds

When Dolce & Gabbana brought its Alta Moda extravaganza to town — and splashed New York all over its couture clothes. 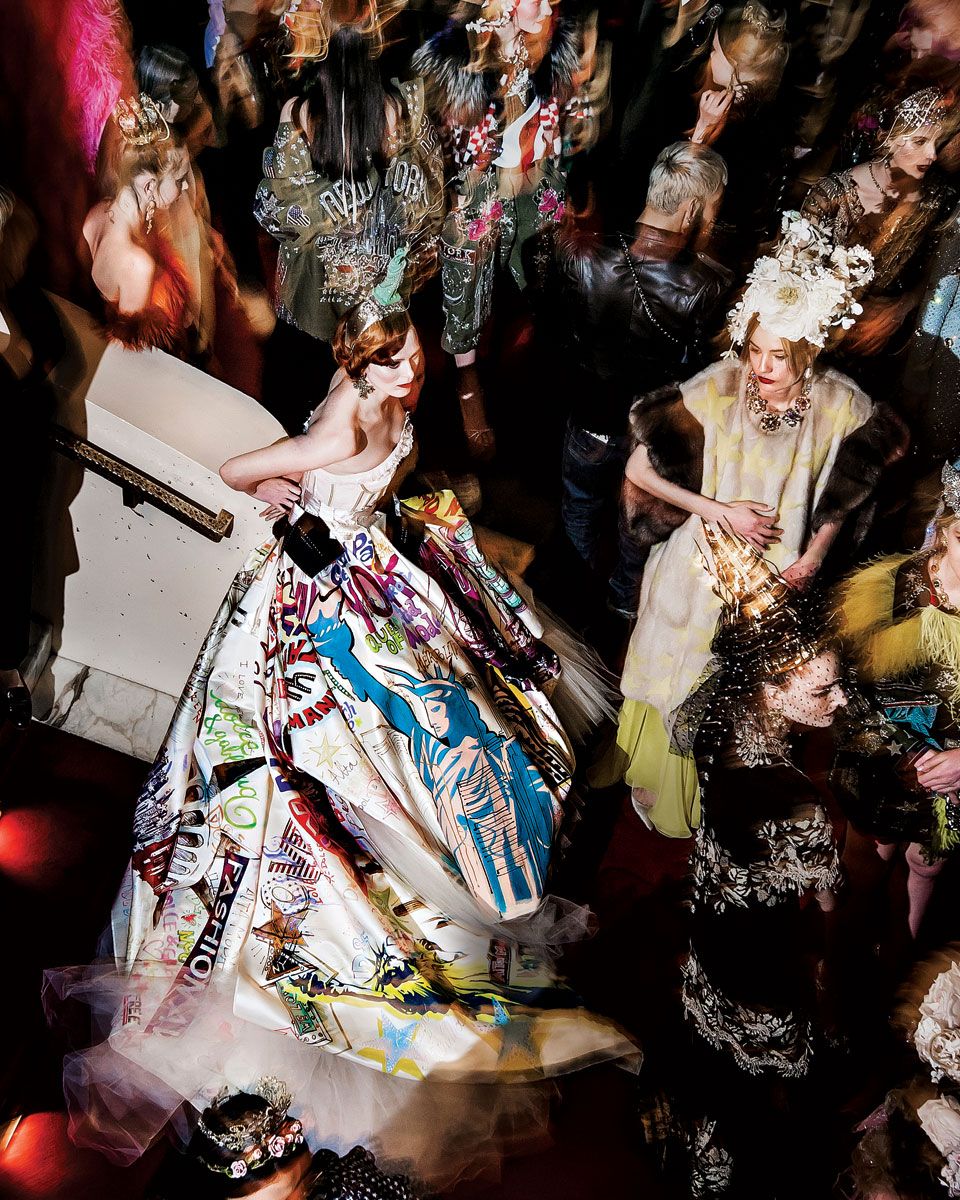 Above: Karen Elson models a one-of-a-kind gown during the Alta Moda fashion show at the Metropolitan Opera.

Above: Karen Elson models a one-of-a-kind gown during the Alta Moda fashion show at the Metropolitan Opera.

If you’ve ever wondered how to use the bathroom in a ball gown, the answer is that you don’t. Or that it takes the help of two other people — a trusted confidante and a friendly bathroom ­attendant — to get the job done. This became apparent on April 8 in the ladies’ room at the Metropolitan Opera House, where a tall Toronto socialite named Sylvia ­Mantella could be found laughing at what the internet might call a “first-world problem.” In addition to the gold crown on her head, she wore a bulbous Dolce & Gabbana gown with animals like leopards hand-painted on it. (Mantella owns an exotic-animal sanctuary in Florida that houses a leopard named Jasmine.) But she wasn’t flustered. This is exactly the sort of folly that she and other Dolce & Gabbana clients travel ­thousands of miles — and pay ­thousands of dollars more — for the thrill of experiencing.

Mantella was just one of 300 or so guests in town for Dolce & Gabbana’s four-day Alta Moda extravaganza, making its New York debut after six years of taking place exclusively in Italy. A series of fashion shows, Alta Moda caters to the brand’s most enthusiastic customers, who throw down their credit cards to buy one-of-a-kind pieces within minutes of seeing them on the runway.

The festivities kicked off on April 6 with an Alta Gioielleria event at the New York Public Library. Sex and the City’s Sarah Jessica Parker played host, auctioning off the Dolce & Gabbana fine jewelry pieces on her neck, wrist, and ears — plus the dress off her back to sweeten the deal — for a total of $560,000, all of which was donated to charities of her choosing. Marina Arnott of Newport Beach, the lucky wife of the highest bidder, wore her whole haul to the Met two days later.

According to Domenico Dolce and Stefano Gabbana, some of their most devoted clients are men. Attendees of the men’s Alta Sartoria show on April 7 at the Rainbow Room confirmed this, with some saying they’d worn Dolce & Gabbana exclusively for 25-plus years.

One man from Hong Kong told me he was the brand’s “biggest customer.” Meanwhile, another from New Delhi said he had purchased “most” of the last collection in Palermo. “I’m not sure if I’m more of a fan of Dolce & Gabbana, or if Dolce & Gabbana is more a fan of me,” he added with a smirk.

The Daily Show host Trevor Noah was also amid the crowd at the Rainbow Room. This was his first time at a couture presentation (“It’s wild,” he said). For the briefest of seconds, he thought the woman in front of him was a Liza Minnelli impersonator, only to realize it was Minnelli herself, there to perform. Her finale was “New York, New York,” which made sense, since this year’s shows had hundreds of looks inspired by such local monuments as the Statue of Liberty and the Empire State Building. “These are symbols you can understand all over the world,” said ­Stefano Gabbana.

Back at Lincoln Center on Monday, supermodel Karlie Kloss opened the women’s show in a red number made entirely of feathers, while Naomi Campbell closed in a gown with the city skyline hand-painted on its train.

“Many of us came to America in search of fortune, and we haven’t forgotten it,” said Isabella Rossellini, who’d watched her son, Roberto, walk the Alta Sartoria runway. And now those fortunes were ready to be spent.

+Comments Leave a Comment
Inside Dolce & Gabbana’s Alta Moda Extravaganza
parties! Yesterday at 8:17 p.m.
Microdosing Opulence at the Hermés Block Party The Parisian fashion giant celebrated the opening of its new flagship store in New York.
how does it fit? Yesterday at 6:17 p.m.
We Tried Ganni’s Top-Selling Pieces on 3 Different Bodies Are we #GanniGirls?
society pages Yesterday at 5:56 p.m.
Martha Stewart and a Big Fish Stopped by the Tin Building Opening Jean-Georges Vongerichten’s South Street Seaport food hall celebrated its opening with a themed culinary funhouse.
q&a Yesterday at 4:49 p.m.
Hiam Abbass on Playing Ramy’s Matriarch, Maysa We spoke to the Ramy star about the show’s ambitious third season.
fashion Yesterday at 4:22 p.m.
Is There Trouble Between Anna Wintour and Edward Enninful? A new report from the Daily Beast hints at unrest between the Vogue editor and her protégé.
always shopping Yesterday at 4:20 p.m.
Winter Gloves to Buy Before It’s Too Late We spoke with experts to get their favorite pairs.
parties! Yesterday at 3:45 p.m.
Dua Lipa, Amal Clooney, and More of the Bestest Party Pics This Week Some of our favorite looks from the New York Ballet Gala, a Chanel launch, and other glam events.
power Yesterday at 3:35 p.m.
Protests In Iran Continue Over Death of Mahsa Amini Despite a brutal crackdown, women continue to take to the streets in defiance of government orders.
the most fertile man Yesterday at 3:30 p.m.
Nick Cannon’s Quest to Populate the Earth Continues Cannon just welcomed his third child with Brittany Bell.
celebrity Yesterday at 3:16 p.m.
Trevor Noah And Dua Lipa Sure Look Cozy The pair was spotted kissing in New York City this week.
pfw spring 2023 Yesterday at 1:46 p.m.
At Rick Owens, an Ancient Muse Plus more from Paris Fashion Week, including a new energy at Schiaparelli.
By Cathy Horyn
friday sales Yesterday at 1:34 p.m.
20 Things on Sale You’ll Actually Want to Buy: From Disney to Neutrogena Including K-beauty must-haves and a great pair of mom jeans
get it together Yesterday at 1:19 p.m.
7 Light Therapy Lamps to Help With Seasonal Affective Disorder How to use SAD lamps and how they work, according to psychologists.
By Amanda Arnold, Amanda Svachula, and Brooke LaMantia
action item Yesterday at 11:45 a.m.
How to Help Those Impacted by Hurricane Ian As of Friday, nearly 2 million people in Florida were still without power.
always shopping Yesterday at 11:30 a.m.
15 Classic Wool Coats Under $400 Because it’s getting cold out there.
By Andrew Nguyen, Devine Blacksher, and Bianca Nieves
health Yesterday at 11:00 a.m.
The Myth of Adrenal Fatigue The “condition” touted by the wellness industrial complex could explain everything you’re feeling — if only it were real.
By Annaliese Griffin
holiday gifts Yesterday at 10:30 a.m.
35 Gifts for Literally Any Man in Your Life Foolproof options, whatever the occasion.
By Andrew Nguyen and Chinea Rodriguez
celebrity Yesterday at 10:10 a.m.
Sounds Like Hailey Bieber and Selena Gomez Are at Peace On a new episode of Call Her Daddy, Bieber denied the rumors that she and Gomez are feuding after she “stole” Justin Bieber.
how i get it done Yesterday at 10:00 a.m.
How Hanifa Designer Anifa Mvuemba Gets It Done During Fashion Week “My team knows when I’m in New York it’s for work, but it’s also me enjoying myself.”
By Asia Milia Ware
extremely online Yesterday at 10:00 a.m.
I Can’t Shut Up About Kim Trying to Walk in This Dress There is something deliciously humbling about watching a full-blown adult bunny-hop up some stairs.
More Stories