Promising beauty influencer and off-duty musician John Mayer has sung about bath bombs and the secret to poreless skin. Next up, his tutorial on the bread-and-butter of beauty: The smoky eye. Last night on Instagram stories, Mayer posted a step-by-step on how to get the look, complete with uncomfortably close photos.

First, according to Mayer, you have to choose an eye-shadow palette that has colors (unlike apparently all those other color-less eye shadows available for sale). Choose colors you like, he wisely suggests. Mayer’s choice is Chanel Les Ombres palette, which he endorses because he “really like[s] Chanel colors.” (However, he doesn’t tag Chanel Beauty’s new Instagram account, @WeLoveCoco.” Blogger fail, Mayer). He’s doing “some color study on some things,” he explains without elaborating. 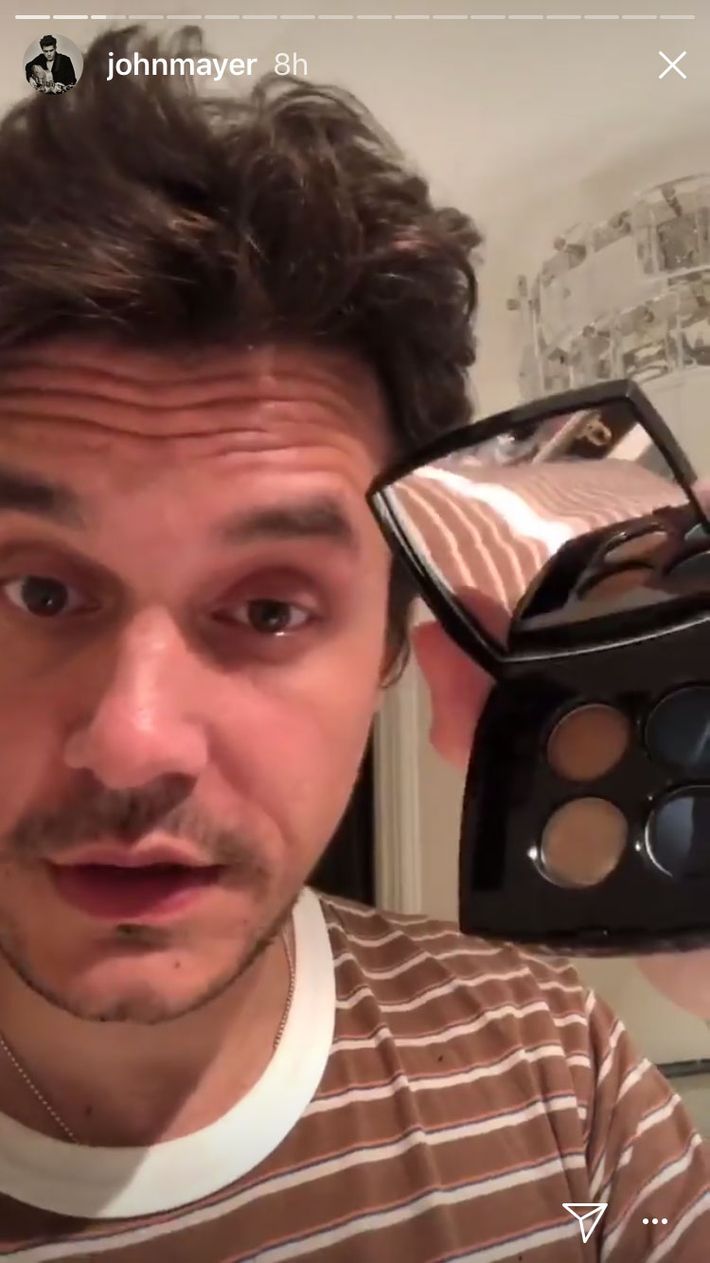 Then throw out everything you know about makeup brushes — including your brushes, he advises. While nearly every makeup professional on the planet uses them, Mayer is practical — he’s just one of us! Don’t spend hundreds on fancy mink brushes, says the man who lurks on luxury watch forums. Just use the short sponge applicators that come with the palette, he advises. Hmmm. 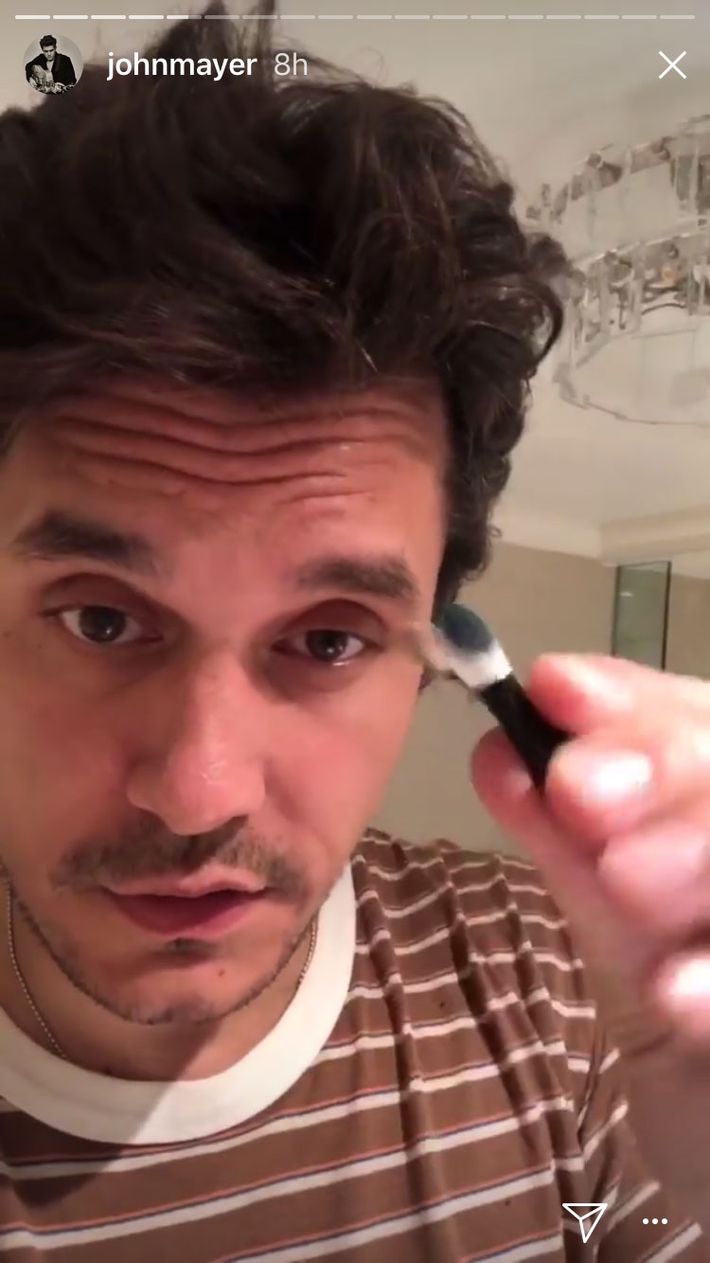 Use your sponge applicator and dip it into the first shade (“You don’t have to use all four shades.”) “This is where guys get it wrong, they go too heavy. But notice how I’m already impressing you with my light touch,” he narrates, patting himself on the back.

Not sure how much to blend? Blend based upon your attention level. “I’m going heavier now because I’m bored,” he says. Once you’re officially over it, go to town until the eye is completely covered, yet still patchy. This is “the first layer,” he says. 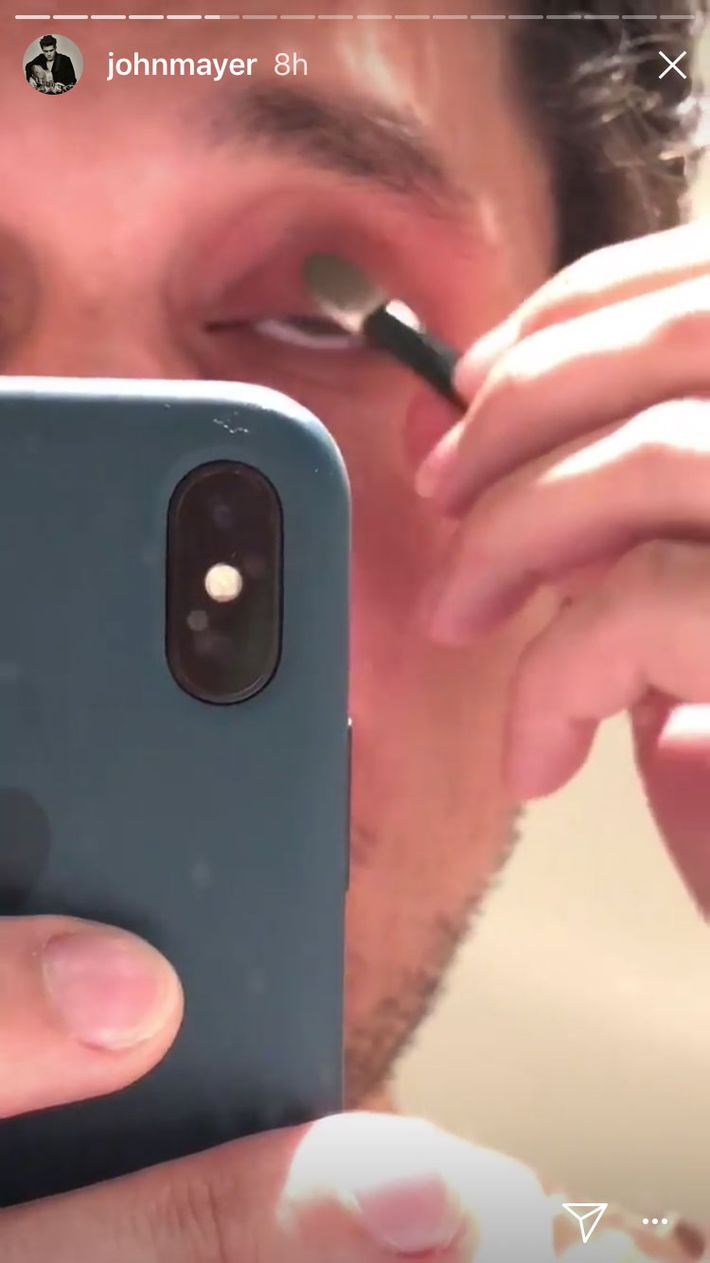 Next up, emphasizing the very nature of the eyeball itself with the second color. “You want to accentuate the roundness of your eyeball,” he says (but no one else says, ever). Swiping wildly, he pats in eye shadow using his finger up to the orbital socket. 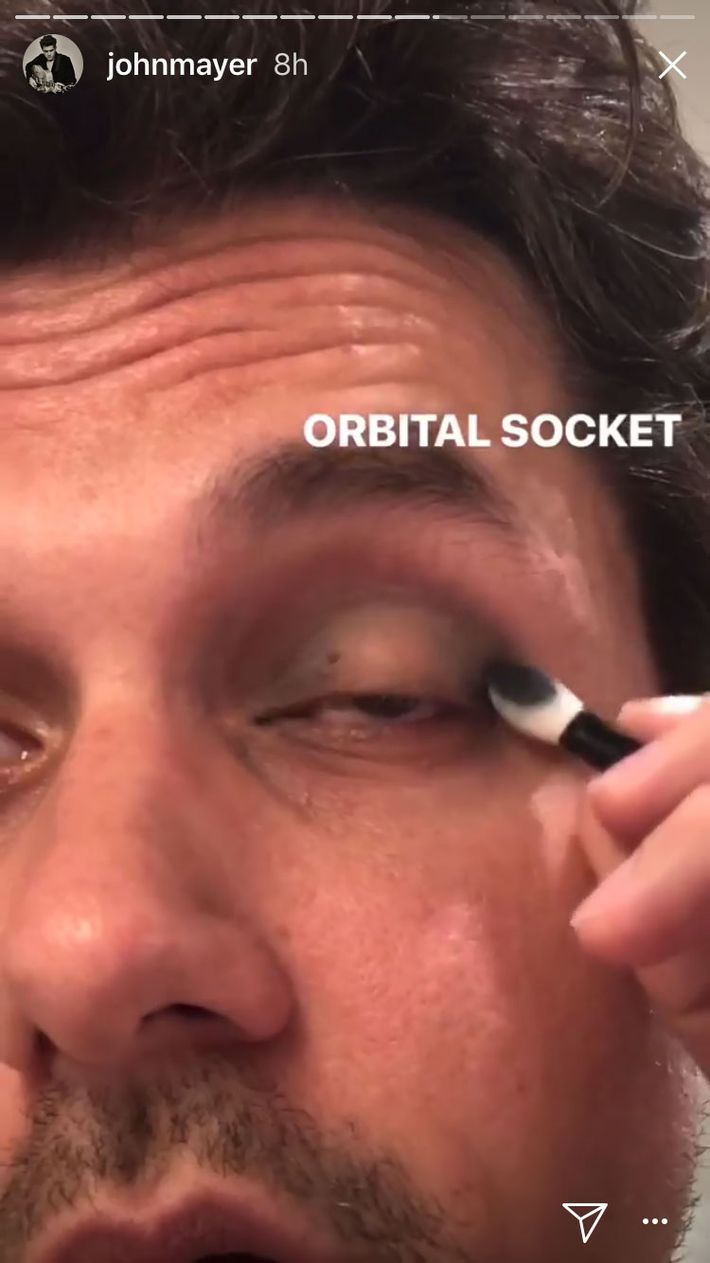 And finally, just stop. You’re done (I guess?) once you’ve blended eye shadow up to your eyebrow. Like his own Netflix beauty version of Nailed It, Mayer asks, “Oh, I’m sorry. Did somebody nail it?” 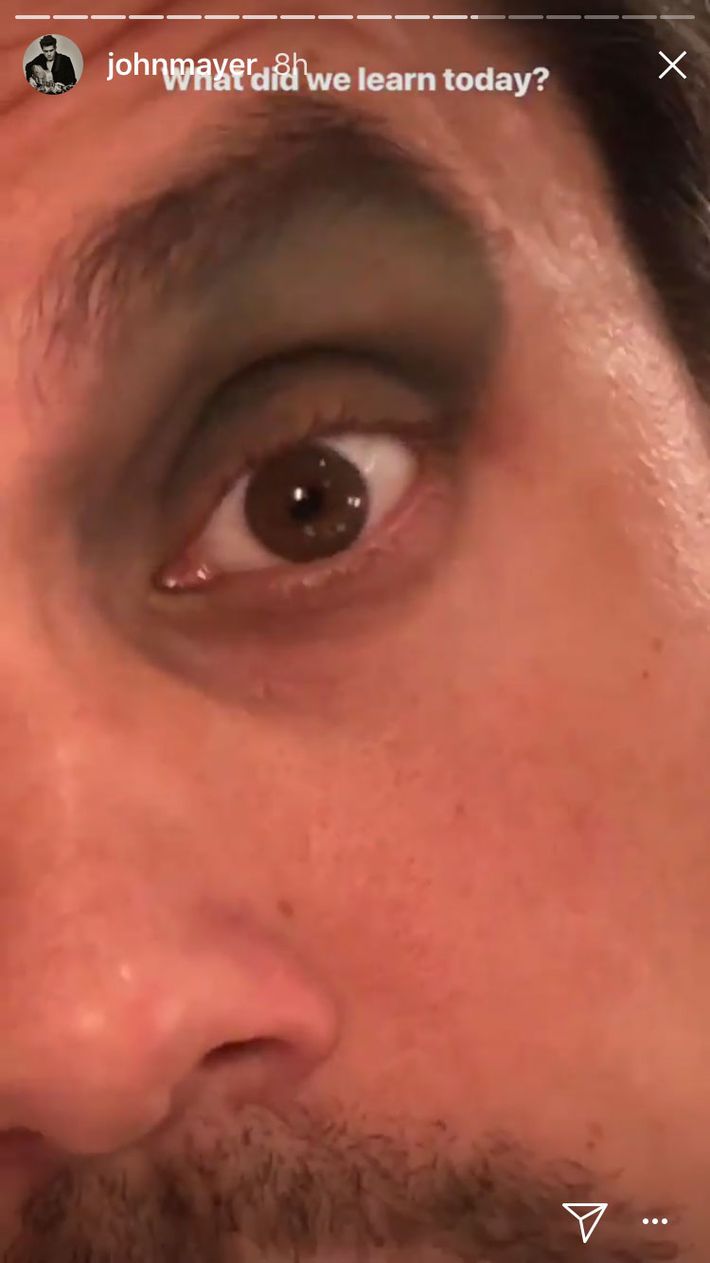 In the end, Mayer can’t tell if his smoky eye was actually good or not, but that’s not what matters. What’s important is that you allow eye shadow to embrace its full potential. “Do you want to be the type of person who stares at eye shadow completely unused and doesn’t want to try it themselves?” he pontificates, while asking that people slide into his DMs and let him know if it’s good.

Is it good? Well, we leave it to the original inventor of the smoky eye to judge. What it’s not, John, is compliant with FTC regulations. Don’t forget those hashtags.

i tried it 8 mins ago
Can Reciting a Daily Mantra Make You Treat Yourself Better? For weeks, I’ve been repeating kind messages to my reflection.
what we know 23 mins ago
Texas School Shooting Investigation Descends Into a Mess Officials give contradictory statements and parents say they were ignored and arrested trying to save their children.
father's day 10:28 a.m.
What Our Editors Are Gifting Their Dads Spoiler warning for Cut dads.
gun control 9:45 a.m.
The NRA Will Still Hold Its Conference in Texas This Weekend Ironically, attendees will not be allowed to bring guns to the event.
health 8:49 a.m.
The Baby-Formula Shortage Won’t Get Better Anytime Soon FDA commissioner Dr. Robert M. Califf said that shelves should be restocked by late July.
encounter 8:00 a.m.
The Hostess Who Kept Their Secret Grace Faison — the 97-year-old Brooklyn Heights fixture — opens up about secretly housing women seeking illegal abortions in the late ’60s.
By Eliza Gray
uvalde Yesterday at 9:04 p.m.
What We Know About the Police Response to the Uvalde Shooting Rep. Joaquin Castro has asked the FBI to investigate the police response to the school shooting.
lawsuits Yesterday at 6:30 p.m.
Amber Heard Says Her Defamation Trial Is ‘Humiliating’ and ‘Painful’ On the last day of testimony, Heard again denied claims from Team Depp that she lied and falsified evidence.
uvalde Yesterday at 6:27 p.m.
‘As Teachers, We’re Expected to Put Our Lives on the Line’ An educator near Uvalde feels the weight of the Texas school shooting.
in her shoes podcast Yesterday at 6:17 p.m.
The Slippery Slope Ahead As Roe v. Wade Is Challenged  New York’s Rebecca Traister on what’s possible in the fight for abortion rights.
By the Cut
gone sale-ing Yesterday at 6:14 p.m.
Let the Cut Be Your Personal Shopper for Memorial Day Deals We rounded up the best deals from Everlane, Nordstrom, Outdoor Voices, and more.
power Yesterday at 5:31 p.m.
Amber Heard Says She Gets ‘Thousands’ of Death Threats a Day “I am harassed, humiliated, threatened every single day, even just walking into this courtroom,” she testified as Heard v. Depp wraps up.
action item Yesterday at 4:45 p.m.
How to Help the Uvalde Community From supporting Robb Elementary School families to pressing for gun-control legislation.
mental health Yesterday at 3:00 p.m.
Get Your Toxic Positivity Out of My Face Increase your tolerance for difficult feelings already.
power Yesterday at 2:44 p.m.
Kevin Spacey Has Been Charged With Sexual Assault in the U.K. The alleged incidents took place between 2005 and 2013.
what we know Yesterday at 1:20 p.m.
These Are the Names of the Uvalde School-Shooting Victims Nineteen kids and two teachers are dead after a gunman opened fire on a Texas elementary school on Tuesday.
uvalde Yesterday at 12:50 p.m.
“It’s One of the Biggest Fears of My Life” After the Uvalde shooting, a Columbine survivor dreads sending her daughter to preschool this fall.
power Yesterday at 11:47 a.m.
States Are Scrambling to Restrict Abortion Access With the Supreme Court expected to rewrite abortion rights, conservative states are advancing increasingly extreme bans.
life after roe Yesterday at 11:12 a.m.
10 Women on Getting an Abortion in the End Days of Roe “It felt like an insult to have to read that my fetus is the size of corn.”
uvalde Yesterday at 10:00 a.m.
‘Who Are the Bad Guys?’ It’s the question my children asked. My answer: the moral cowards who slobber and grovel over money from the gun lobby.
By Kathryn Jezer-Morton
More Stories