Elaine Lui, better known as Lainey Gossip, senior correspondent for CTV’s eTalk and co-host of The Social, knows things. She saw the warning signs of the Brangelina breakup. She knows the validity of Drake and Rihanna. She already has a strong hunch about Brad Pitt’s next girlfriend. It comes as no surprise that even though Lui doesn’t call herself a beauty expert, she knows what works and doesn’t work for her. What currently works is a six-minute eyeliner routine that took her half a decade and two products to perfect. In her own words, Lui talks about why she’s so particular about her eyeliner routine, how Charlotte Tilbury helped her discover her best look, and why her look is most definitely not a cat-eye.

I’m not an expert but I have my favorites and my opinions. Just like in my style routine, I like a mix of the high and low. I like some really cheap shit that’s great but also some luxury. I don’t believe all in one thing. Doing all the things I see as, like, wearing Gucci head to toe — who are you, Jared Leto?

I have developed my eye look but I’m fucking pissed that it took this long. It wasn’t until the last five years that I really got it. We all have different eyes. Eyes are so personal, you have to get up in your own business — whether it be yanking, pulling, holding it up. I know my own eye the best.

I don’t call my look a cat-eye. When you say cat-eye, you picture a pretty long wing. I’m not into that. What I do like is a word I picked out that Charlotte Tilbury said — a flick-eye. There’s nothing better. I’m very particular about how a flick-eye needs to be applied on my eye. Even the makeup artists in the studio say that the way I do it is the best.

In my experience, a lot of makeup artists don’t do Asian eyes right. They do a cat-eye but instead of a sharp corner that should flick, they do a curlicue. I always hated the curlicue but didn’t know enough about makeup or have the makeup confidence to say, “No, don’t do that!”

I have eyes that are slightly downturned. In fact, non-Asian people generally have eyes that are cat-shaped on their own. People always describe Asian eyes as being “almond-shaped” but no one’s eyes are like that. I’ve met one exception — my mom, that bitch. I just posted a photo of her on my Instagram. My mom does have legitimate almond eyes. But I didn’t get my mother’s eyes, I got my dad’s regular Chinese eyes. A lot of makeup artists who weren’t trained, wouldn’t follow the shape of my eye all the way downwards, they’re scared to. They’re used to what you typically see on TV — non-Asian women.

What I do is draw the line right on top of the lashline. I follow the shape of my eye all the way to the lower corner. Then you make the flick. Prior to learning how to do this, I wore a version of it. Around the time I met [Tilbury], I had figured it out. Sometimes all it takes is a good verbal description to make something click. As soon as she said, “Flick,” that’s when it clicked for me. It should look like a checkmark. 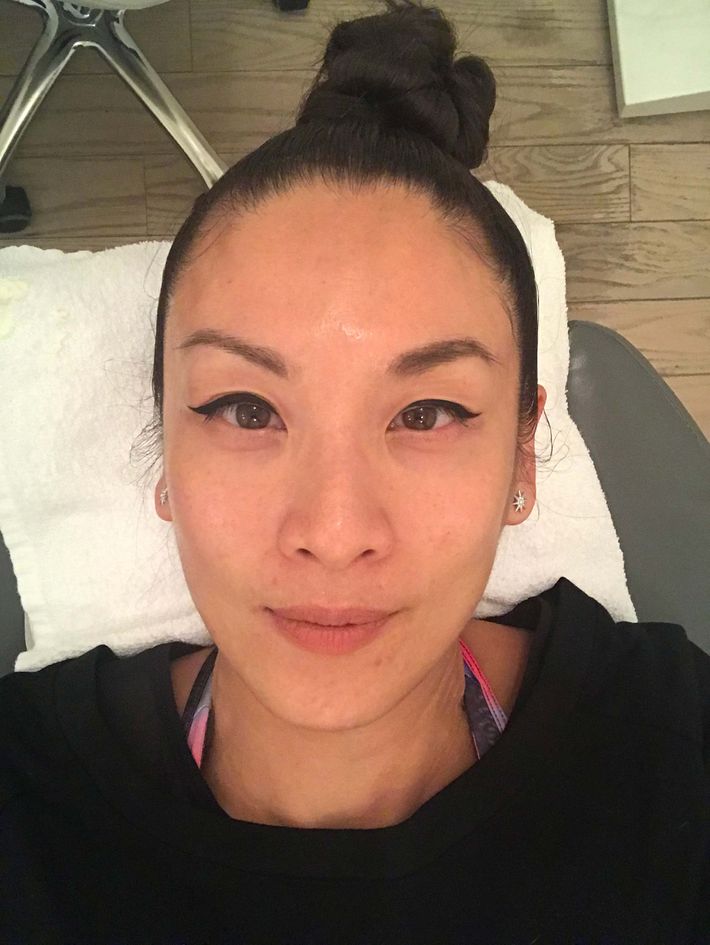 I don’t have a problem with the original cat-eye but this look is more suited to my eye. But I also think it’s a more modern application. I find the curlicue dates you. That’s how people were doing makeup in the ’60s. It’s a little retro. This look works for me because I think it’s the exact mirror of your eyebrow. When you draw an eyebrow, there’s a little bit of a corner. It’s an upside-down corner.

When it comes to product, I don’t love a shiny eyeliner. I like the black to go on and I like it to dry matte. I have to have a liquid eyeliner because I have very oily eyelids. It needs to be liquid and waterproof. I have a system for doing eyeliner, I actually use two. The first one is M.A.C Liquid Last. I like it because it’s matte, dries quickly, and legit does not move. There have been some that I’ve tried which claim to be waterproof. They go on and then, ten hours later, I’m a mess. This one, I go to the gym with it on. I’ve done long shooting days where I start shooting at 6 a.m. and then finish at 10 and it doesn’t move.

The second is that I use another M.A.C eyeliner, MAC’s Fluidline pen. I put M.A.C Liquid Last onto a mirror. Rather than using that brush, I use the Fluidline pen, dip it into the pigment, and draw it on. I just like the applicator better. It’s literally like painting. I hold it like a pencil. After applying the eyeliner, I blast the lid with cold air from a hair dryer. It helps the liquid liner dry quicker but it also “sets” the liner, immediately removing any moisture from the eyelid. When I do this, the liner lasts even longer and gives off a perfect matte finish. Has anyone else claimed this technique? If not, can I?

Sometimes I can’t make it into makeup a few days a week so I will do my makeup myself. Even when the makeup artists on set do it, they’ll still do the smear, but they’ll use their own brush. But we worked on it together. I told them that this is what I like. We figured it out. We can get it done now in six minutes, both eyes, door to door.

I’m particular about my eyeliner, but it’s the only thing I wear on my eye. I refuse to wear eye shadow. I don’t really deviate. The Oscars is the one day a year when I will accept eye shadow. Again, it goes back to the Asian eye. My particular eyes don’t have a ridge. If you put eye shadow on me, it’s flat. It immediately dresses up my face. It’s like it’s nighttime. I think it’s too extra, day to day. We don’t need an evening eye all the time. The eyeliner is the main event, every single day.