If you were anywhere with cell-phone reception on Saturday night, then chances are you were going apeshit over the news that Beyoncé and Jay-Z had just dropped a joint album, Everything Is Love. “Apeshit” also happens to be the name of the single for which the husband-and-wife team dropped a music video that night, filmed in the Louvre museum in Paris.

In the video, directed by Ricky Saiz, Beyoncé and Jay-Z each perform multiple outfit changes. (We counted eight scenes total.) With the help of their respective personal stylists, Zerina Akers and June Ambrose, they assembled looks that carry on a conversation with the art on the walls, from ancient sphinxes to the Mona Lisa. Like the album, the fashions are also a flex, with lots of logos, luxurious suits, and recognizable designs.

Below, we break down each of their outfits and who designed them. 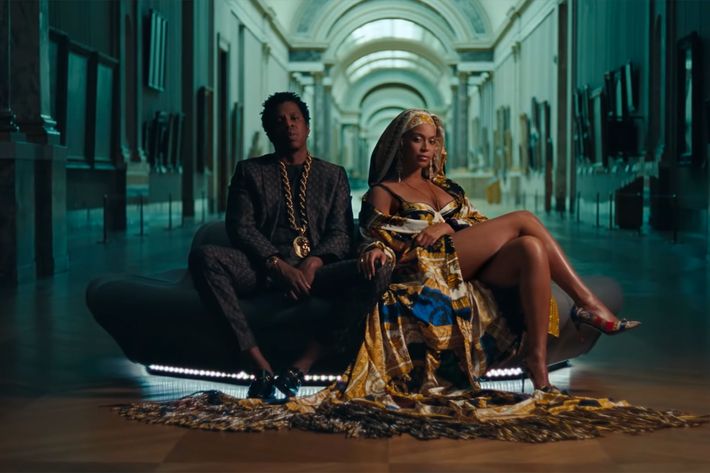 Both wear overcoats on their shoulders while standing in front of the Great Sphinx of Tanis, but Beyoncé’s MCM x Misa Hylton look is full leather. She also wears knee-high boots that spiral around her legs by Y/Project, a Parisian brand led by designer Glenn Martens. Jay-Z wears Alexander McQueen. 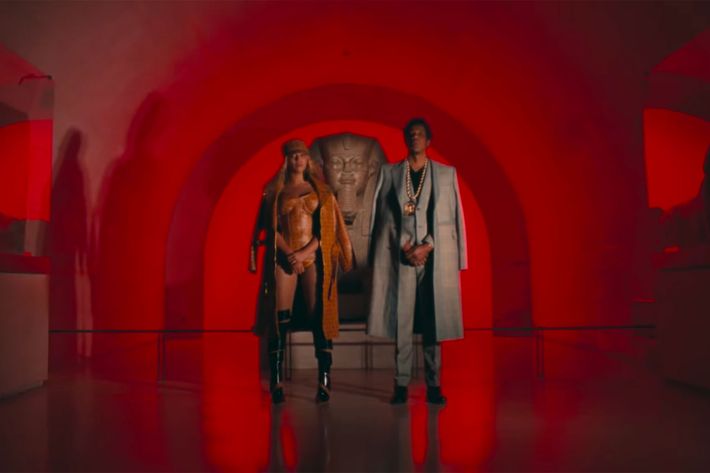 Beyoncé wears a white Stephane Rolland couture dress with a pleated Alexis Mabille cape on top, both of which are a reflection of the Winged Victory of Samothrace sculpture behind her. Jay-Z wears Givenchy. 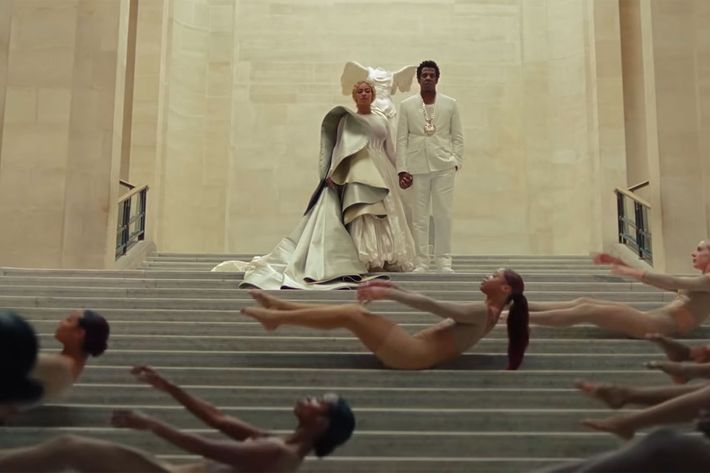 Beyoncé dances in front of Jacques-Louis David’s The Coronation of Napoleon wearing a bra and leggings by Burberry. 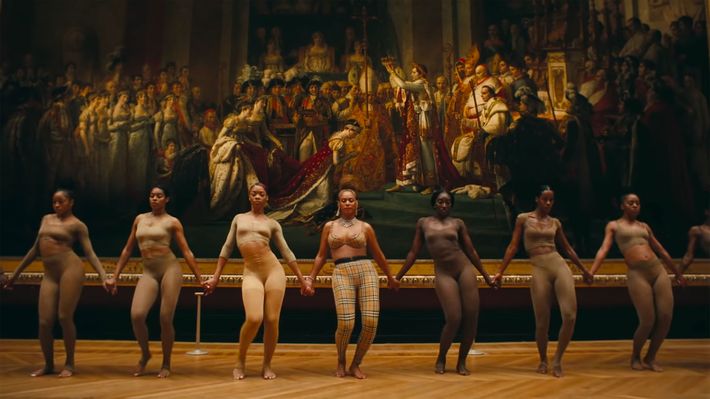 It’s hard to tell in this lighting, but Jay-Z’s John Galliano suit is a light shade of pink. 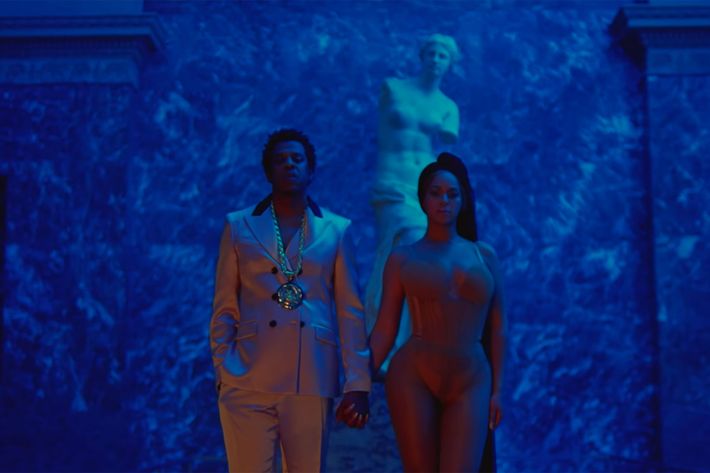 Not Your Mother’s Pearls

Beyoncé wears a pearl bodysuit by Balmain with a matching pearl scarf. Designer Olivier Rousteing also did her Coachella costumes. 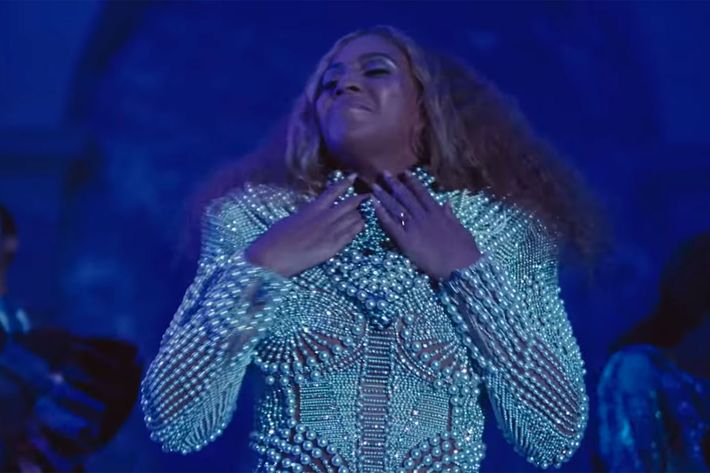 If you squint your eyes, the pattern on Jay-Z’s Gucci suit seems to be in sync with the facade of the Louvre behind him. 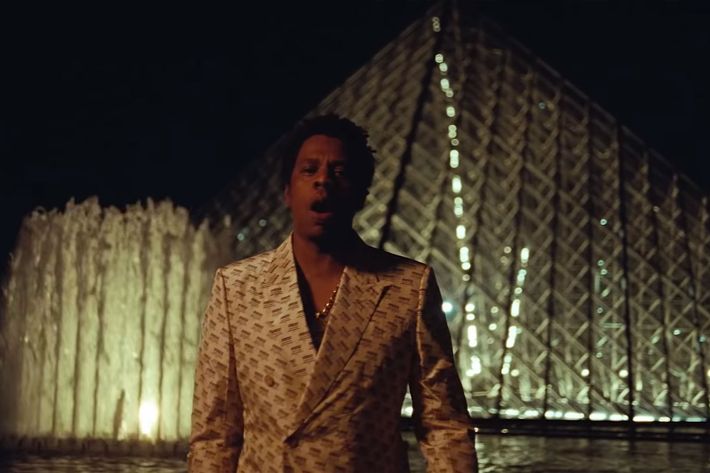 In the beginning and end of the video, Beyoncé and Jay-Z both wear pastel-colored suits in front of the Mona Lisa. Like the subject behind her, Beyoncé’s Peter Pilotto suit has a deep neckline. Her belt also folds like Mona Lisa’s hands. Meanwhile, Jay-Z’s green Dries Van Noten suit matches the painting’s case and some of its background hues. 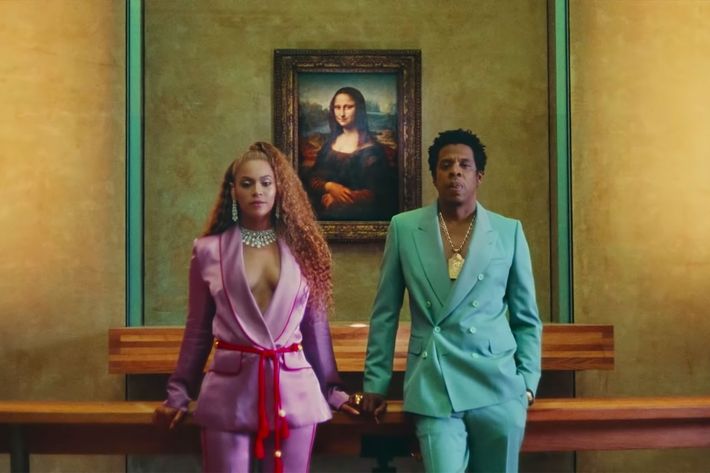 See all of Beyoncé’s best looks, below.