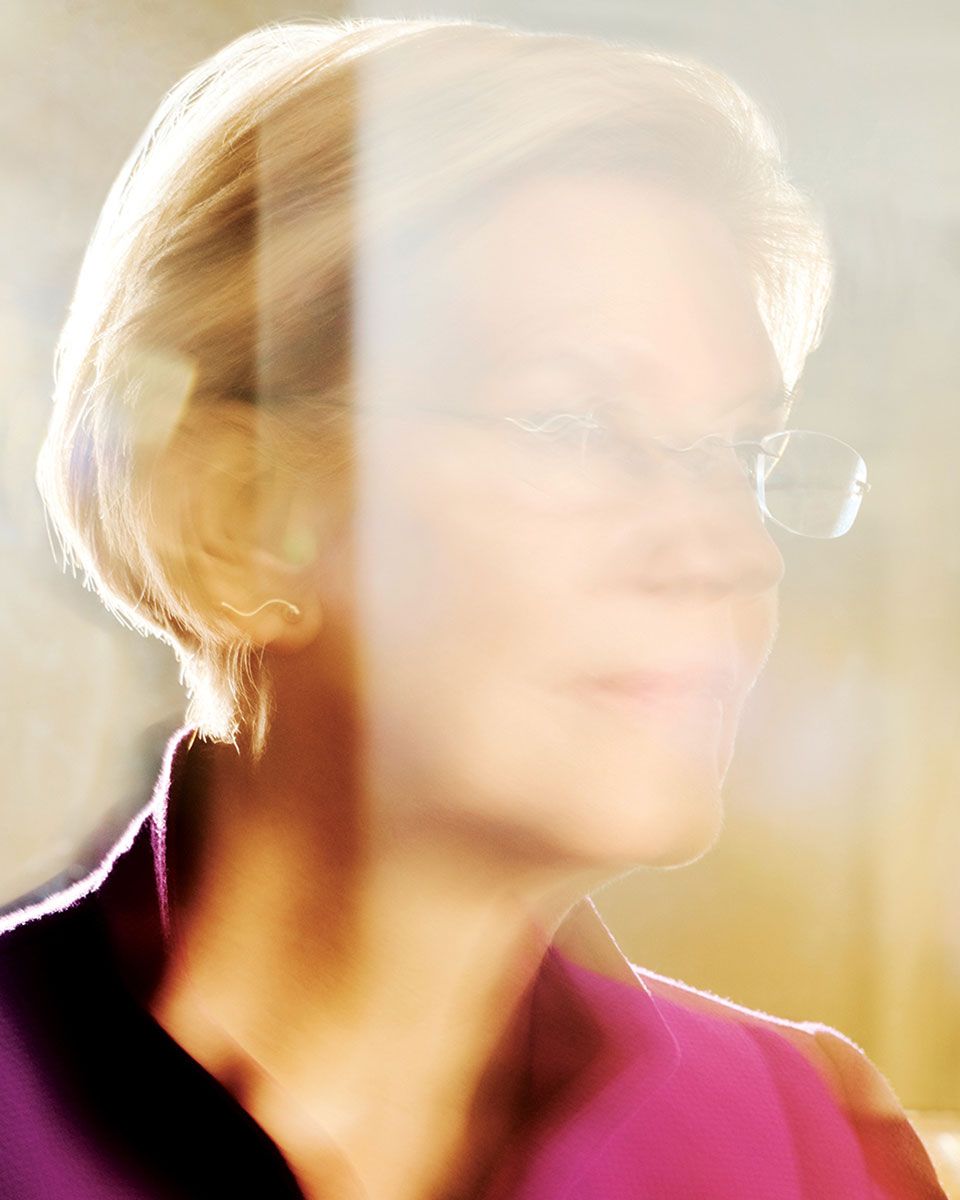 When Senator Elizabeth Warren took the stage in Massachusetts at The Women’s March eighteen months ago, she said five words about women that haven’t left our minds since: “We will not play dead.”

After being dismissed from the Senate floor sixteen days later for speaking out against then-Senator Jeff Sessions, Senator Warren followed that mantra.

She has continued to speak out against the Trump administration every day since the President took office. To quote the righteous Senior Senator: “The people of Massachusetts didn’t send me to Washington to roll over and play dead while Donald Trump and his team of billionaires, bigots, and bankers crush the working people of this country.”

We spoke to Senator Warren about how women can make their voices heard politically, what she does to decompress, and why she’s as fired up as she’s ever been.

AG: Over the past year, women like our members have been activated and have taken an interest in politics in ways that they never expected to. Frankly, they’re very angry. You were the first female senator in Massachusetts — what advice do you have for all of the women who are running for office for the first time in this election cycle?

EW: Just do it. I don’t want to sound like a Nike commercial, but do it. Reach into your heart and figure out the reason you’re thinking about jumping into a race, because that reason needs to be strong and steady. There’ll be lots of tough days and miserable nights when you’ll have to pull on that reason and it will have to sustain you.

It’s hard to be in the fight, but for me it’s even harder to stand on the sidelines and watch the fight go by and know that you hadn’t done everything that you could to make it come out the way it should. So get out there and run for office.

What were the reasons for you when you made the decision to take the leap? What were the core issues that motivated you?

I had watched up close and personal as hardworking families took it on the chin time after time after time. No one stood up for them. I just reached a point where I couldn’t stand it any longer.

I grew up in a family that was paycheck-to-paycheck. We didn’t have much. My daddy ended up as a janitor. My mom worked a minimum wage job at Sears. I got a chance in life because of good public schools and a commuter college that cost $50 a semester. I realized that there I was, a Harvard law professor who had gotten this chance in America because, sure, I’d worked hard, but I’d grown up in a country that was investing in kids like me, and that the path I’d taken is literally gone.

That doesn’t mean we’ve made enough change. But it was our supporting each other that got the change started in the first place. Now the job of Congress is to change the rules around here so that we live our values every day, and we hold each other accountable. To pass rules to support people who’ve been sexually harassed all across this country.

Let me give you one example. I’ve introduced a bill to say publicly traded companies should have to disclose how many sexual harassment claims they have settled, and for how much money. I believe that that’s important because if we get a lens into which companies have a lot of problems in this area, then there will be more pressure for those companies to clean themselves up. If companies can hide their settlements over sexual harassment, if they can pay money under the table and insist on the silence of the victim, then nobody has to make any real change. That’s the kind of thing that Congress can do. We can set the rules that either make it harder to make change, which is where those rules are right now, or that make it easier to make change.

Where were you in 1991, during the Clarence Thomas and Anita Hill case? Were you at Harvard?

No, I was not yet at Harvard. I was still at Penn. But I can tell you exactly where I was: I was in upstate New York. I’d gone out to deliver a lecture at a university up there, and like everyone else, I was just glued to the television set during those hearings.

I was particularly intent on watching because I knew Anita. Anita taught at the University of Oklahoma. I’m from Oklahoma, and we both taught in the same field at a time when women teaching financial courses were still pretty rare. We knew each other from conferences and different get-togethers, and I remember as I watched Anita taken apart by members of the Senate Judiciary Committee, thinking how brave she was to come forward, and how deeply unfair the attacks on her were. I knew her to be a good and decent and honest woman, and what she got for stepping forward was an attack on her integrity and it was wrong.

There was no structure [back then]. There were not millions of women across the country who were instantaneously connected to each other and ready to stand up on her behalf. Instead, she had to face that Senate panel almost alone. That wouldn’t happen today.

I saw that 17 Democrats just joined with Republicans to help deregulate banks with less than 250 billion dollars, which exempts 25 of the 38 biggest banks in the world. I was kind of flabbergasted by that and wanted to know your opinion. What was really behind those 17 Democrats voting this way?

Lobbyists. On the 10th anniversary of the biggest economic crash since the Great Depression, the lobbyists have pushed Congress to advance a bill to help deregulate the banks that sucked down taxpayer money. Nobody went to jail, and now those same banks are making record profits. The only way to explain it is that the banking industry has got plenty of money, and they make their voices heard right here in Washington. The voices of the American people aren’t nearly so loud in the halls of Congress. Right now this government works great for anyone who can hire an army of lobbyists and lawyers, but it doesn’t work so well for everyone else. But we’re going to change that. It’s only when all of us speak up that we’re going to make our government work for the people.

Laundry. Okay, okay. No laughing! I do the laundry, and I have all of my routines and bits and pieces. I even iron. It smells good, and it just feels like no matter what else went wrong this week, I can sit there on Sunday afternoon and fold laundry and know I accomplished something.

+Comments Leave a Comment
Elizabeth Warren on #MeToo, Anita Hill, and Being Angry
what we know 7:17 p.m.
Memphis Police Release Horrific Video of Tyre Nichols’s Beating: Updates The footage shows police officers repeatedly striking Nichols, then not rendering aid afterward.
spring fashion 6:08 p.m.
12 Ways of Looking at André Leon Talley The friendships and love stories found inside his estate auction, as told by his nearest and dearest like Anna Wintour, Marc Jacobs, and Tom Ford.
By Cathy Horyn
wait what is happening on tiktok? 6:05 p.m.
Everything We Know About TikTok’s Lashgate Drama Did Mikayla Nogueira add false lashes or not?
parties! 5:56 p.m.
Teyana Taylor, Anna Camp, and More of the Bestest Party Pics This Week Parties with Gucci, Sundance, and more.
gone sale-ing 4:37 p.m.
10 Things You Don’t Have to Pay Full Price for This Week Deals from Dyson, Nordstrom, Shopbop, and more.
friday sales 3:01 p.m.
19 Things on Sale You’ll Actually Want to Buy: From Lunya to Areaware Including fuzzy Birkenstock clogs, a teensy Cricut heat press, and our favorite weekender bag from Patagonia.
recommendations 3:00 p.m.
20 Best Butt Plugs You Can Buy Online According to experts.
q&a 12:53 p.m.
Saint Omer’s Guslagie Malanda Is No Longer an Actress in Secret How the Saint Omer actress went from art curator to awards-season hopeful.
the wedding files 12:26 p.m.
A Twice-Rescheduled Midweek Wedding in the Hudson Valley “We’re not really ‘farm wedding’ people, so that limited our options.”
By Kaitlin Menza
celebrity couples 12:15 p.m.
This Good Morning America Romance Keeps Getting Messier Amy Robach and T.J. Holmes are reportedly out at ABC.
keeping up with the royals 11:57 a.m.
Has Prince Andrew’s Teddy-Bear Collection Been Confiscated? His Buckingham Palace apartment has reportedly been revoked, and with it, his dozens of stuffed toys.
bellissimo 11:47 a.m.
Where Have I Seen Michael Imperioli’s Home Before? It’s unclear where The White Lotus ends and Imperioli’s apartment décor begins.
couture spring 2023 11:42 a.m.
At Valentino, Couture for Today Designers often look to the past for couture inspiration, but Pierpaolo Piccioli of Valentino believes it is only relevant if it talks to the moment.
By Cathy Horyn
valentine's day 11:05 a.m.
13 Flower Alternatives to Shop for Valentine’s Day Options that will last longer than a week.
culture 11:03 a.m.
Pamela Anderson Found Pam & Tommy ‘Crushing’ The actress called the Hulu series “salt on the wound.”
extremely online 10:44 a.m.
I Can’t Shut Up About the M&M’s Drama Revisiting Tucker Carlson’s one-man campaign against the “spokescandies.”
valentine's day 10:25 a.m.
16 Beauty Products My Boyfriend Won’t Stop Stealing From Me They double as great Valentine’s Day gifts, too.
¡hola papi! 6:00 a.m.
‘I’m Ashamed of Being Unemployed’ The path is long, crooked, embarrassing, and deeply silly. Having friends and passions will make it tolerable.
By J.P. Brammer
celebrity Yesterday at 9:13 p.m.
Britney Spears Just Wants Some Privacy The star confirmed police were called to her home by fans.
celebrity Yesterday at 7:08 p.m.
Ziwe and Lisa Rinna Brought RHOBH to Paris Fashion Week They were “ready to own it” in Mugler.
More Stories