In Conversation With Mary Beard

The Cambridge classicist on misogyny, power, and the future of women in the public sphere. 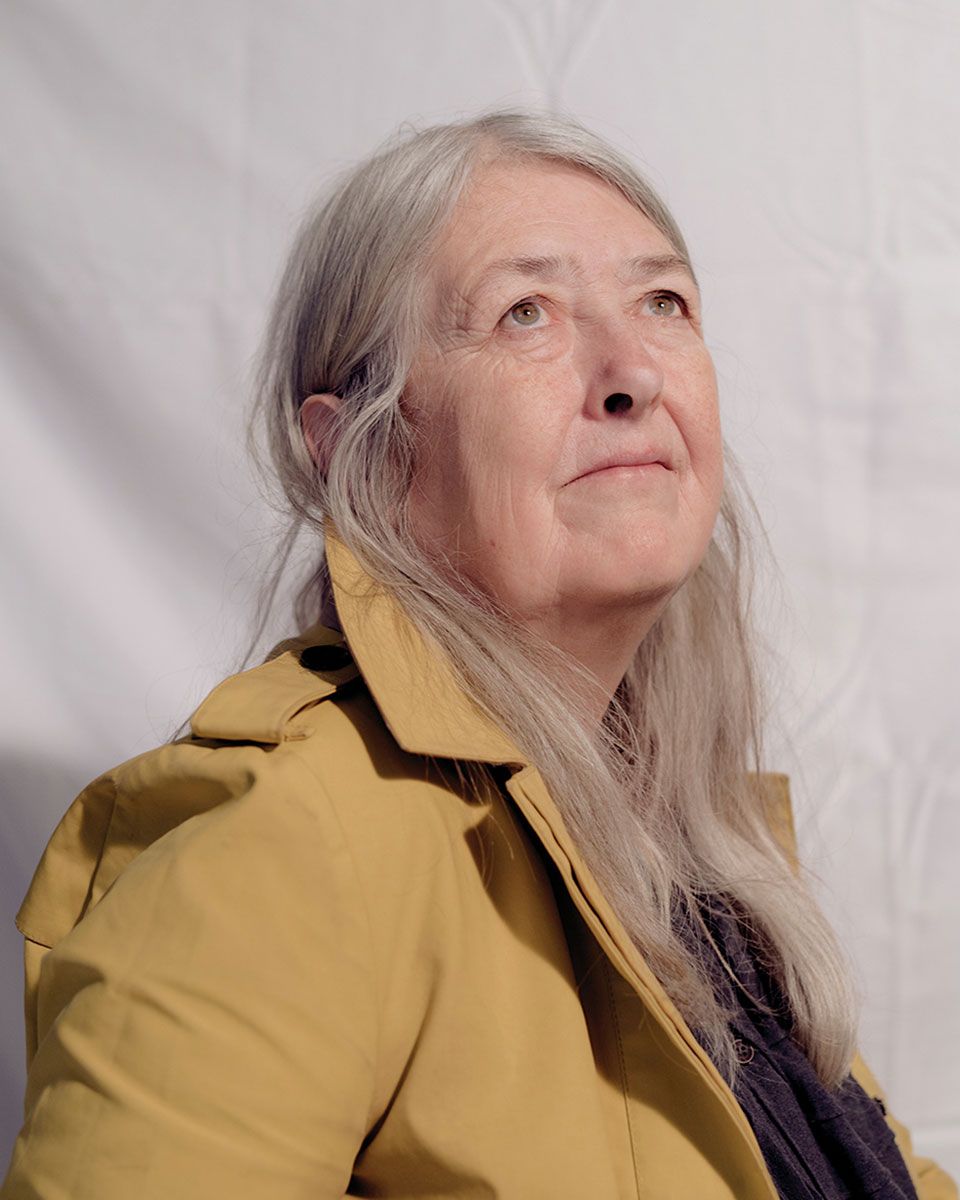 There are some reading experiences that make me gasp with horrified recognition on every page. Mary Beard’s new book, Women & Power, is one of them. Composed of two lectures that the Cambridge classicist gave at the British Museum, it contains her thoughts on women in public and in politics, from Medusa to Merkel.

I met up with her in D.C. while she was in town to give a lecture at the Embassy of Italy. We sat in overstuffed armchairs next to a massive fireplace in the lobby of her hotel. While two little boys chased each other around the lobby, shrieking in French, we talked for over an hour about what it takes to fight misogyny and the future of women in the public sphere.

MD: You’re a historian of the ancient world. How did you start writing about feminism?

MB: Basically I’m a standard academic classicist. I had both a mum and a dad — but particularly a mum — who was quite politicized, quite aggressively feminist. I’m the kind of person where, whatever kind of feminism you want, it has always seemed utterly inconceivable to me that you wouldn’t claim to be a feminist. It’s quite sad, sometimes, when my students say, “Well, I don’t think I’m a feminist, really.” I have no other way of self-defining.

In most of the spheres that we work in, sexism is never openly avowed.

What has changed about misogyny between ancient times and now?

You unpeel the cultural layers and investigate the history and you will find that the ancients were having some familiar debates. Like Perseus and Medusa: decapitating women, silencing women, cutting women’s tongues out. There are things that are so resonant with now. If you look at what Twitter trolls tend to say when they want to target a woman, they go back to those tropes about cutting tongues out, cutting your head off and raping it. And I’m pretty certain that many of them have not read Ovid.

I think what has happened to misogyny is that in most of the spheres that we work in, sexism is never openly avowed. It would be scandalous among any of my colleagues for someone to say, “Well, frankly I don’t think women are going to be up to this.” The world feels as if it’s changed — we would be shocked if we were to go back to ancient Greece or Rome. But the gloomy question is how far that’s just gone underground.

Maybe sexism has become taboo in acknowledgement, but not in practice?

It’s harder to fight what’s buried, what isn’t avowed, what’s narrativized in a way that somehow makes the person telling the story seem fine. When I was first at Cambridge, 45 years ago, I would go to dinner in colleges where men would say — and they’d be extremely polite about it — “Women will enter this college over my dead body.” And you may think, “That’s terrible.” But on the other hand, you could actually say, “Sorry, I don’t agree with you.” When those attitudes remain but go unspoken, it’s very hard to confront them.

I wonder if the disguising of misogyny, or at least the unwillingness to name it as such, shifts the taboo onto the woman calling out misogyny.

I think it does.

Because it makes it seem like you’re detecting a conspiracy, and it leads into all these perceptions that are already stereotypes about women, like you’re crazy or hysterical or whatever they choose to call us that day.

In some ways, when ideological differences are made plain, it can be easier to deal with them. I thought that the domesticity, the sheer awful domesticity of the Medusa images of Hillary Clinton — just the idea that you can have an image of a decapitated woman on your mug or your tote bag — It’s really gob smacking. It would be interesting to find someone who bought that stuff, because they would have a story that would somehow mask the sexism a bit. A joke, or whatever. I don’t know what they’d say.

For me it’s a sense — and this is kind of a historian’s perspective — that oppressors have to have a story they believe in about why they’re not oppressors. That’s the problem with countering oppression. In order to solve it, you’ve got to counter what men tell themselves.

Can you illustrate for me what the logic of misogyny is? What’s inside the mind of your ordinary, run-of-the-mill sexist? What’s the content of the moral argument he has in his head? Because I can’t figure it out.

I can remember when I was a teenager and bold enough to call people out — I lived in a rural community, a fairly conservative one — and the blokes, their stories were always rooted, bizarrely, in the protection of women. This must seem a million miles away from any modern debate, but when I was 16 or 17, one of the things we were always getting cross about was having doors held open for us. I thought, “I can fucking well open the door by myself.” And you tried telling that to men, and it was a surprising issue of contention. It was all about how they saw themselves not only as protecting women, but they saw themselves in a kind of tradition of what they would call “chivalry.” And when you try to explain that the history of chivalry is actually a history of disempowering women, there was non-comprehension.

These guys have no sense that what they’re doing is putting you down.

I think many men are the border between sexism and misogyny. We’re not talking about the guys who want to decapitate women here; we’re talking about the everyday way that you, a woman, are put down. These guys have no sense that what they’re doing is putting you down.

But then we have so little power as individuals to dismantle the structure of patriarchy, right? Instead we wind up fighting against the little daily rituals. And that can make you seem like a crazy person because you’re going after tiny manifestations with the same passion and anger you have for the whole system.

That’s where the triviality of these gestures is also a weapon. Because if you say, “Please just don’t hold the bloody door open for me,” then it’s, “Oh god, you feminists!”

“You can’t take a joke, you’re so hysterical.”

Patriarchy has had several thousand years of practice — of course it’s good at it. It’s very good at bolstering its own sexist values.

Well that makes me feel hopeless!

No, but we have changed. We just have to realize that feminism is a big job.

It feels like shooting spitballs at an army tank, a little bit. What can we really do?

I won’t live to see the victory over patriarchy. You might.

grammys 2023 Yesterday at 10:35 p.m.
The Best, Wackiest, and Most Tin Man–Like Looks From the Grammys Red Carpet No, Beyoncé did not walk the carpet, but Cardi B, Harry Styles, Lizzo, and Taylor Swift arrived in their sparkliest outfits.
grammys 2023 Yesterday at 10:20 p.m.
The 9 Grammys Beauty Looks We Are Re-creating ASAP Want inspiration for your GRWM? Doja Cat absolutely wins in the winged-eyeliner category.
grammys 2023 Yesterday at 8:55 p.m.
The Highlights and Disappointments of the 2023 Grammys From waiting for Beyoncé to Kim Petras’s historic win.
sex diaries Yesterday at 8:00 p.m.
The Tokyo Woman Flying to Milan for a Former Co-worker This week’s sex diary.
grammys 2023 Yesterday at 5:11 p.m.
Every Look From the 2023 Grammys Beyoncé, Taylor Swift, Harry Styles, Lizzo, Bad Bunny, Adele, Doja Cat, Jack Harlow, Mary J. Blige, Sam Smith, and more.
By Brooke LaMantia
astrology Yesterday at 8:30 a.m.
Madame Clairevoyant: Horoscopes for the Week of February 6 A full moon in Leo brings long-simmering feelings to the surface.
By Claire Comstock-Gay
grammys 2023 Yesterday at 12:05 a.m.
Beyoncé Just Broke a Grammys Record The night ended with an upset, but she still holds more awards than any other artist.
parties! Feb. 3, 2023
Pauline Chalamet, Tessa Thompson, and More of the Bestest Party Pics This Week Partying with Guerlain, Marni, and more.
life after roe Feb. 3, 2023
The Future of Abortion Pills Is on the Line One Trump-appointed judge holds the power to effectively ban medication abortion even though the U.S. approves its use up to ten weeks into pregnancy.
spring fashion Feb. 3, 2023
Ella Emhoff’s Other Plus One Her always-present Secret Service detail.
style Feb. 3, 2023
At Marc Jacobs, a Generous, Life-Enhancing Fashion History Lesson The designer’s latest show, “Heroes,” celebrated the the late Vivienne Westwood.
in memoriam Feb. 3, 2023
Paco Rabanne Has Died The revolutionary fashion designer was 88.
spring fashion Feb. 3, 2023
11 Spring Bags, From $7 to $7,900 This season’s most compelling bags, from Forever 21 to Hermès.
best in class Feb. 3, 2023
16 of the Very Best Water Bottles Always be hydrating.
By Emma Wartzman
valentine's day Feb. 3, 2023
The 21 Best Last-Minute Valentine’s Day Gifts Where and when to get them.
friday sales Feb. 3, 2023
20 Things on Sale You’ll Actually Want to Buy: From Klorane to Patagonia Including a heart-shaped mini waffle maker, our favorite cream-blush stick, and a moisturizer packed with snail mucin.
valentine's day Feb. 3, 2023
19 Nontraditional Valentine’s Day Gifts Give something unexpected this February 14.
spring fashion Feb. 3, 2023
Mei Kawajiri’s Very Extreme Nails  Her completely over-the-top talons landed her features in magazines and gigs backstage for Marc Jacobs, Tom Ford, Miu Miu, and Moschino.
By Maya Allen
fashion Feb. 3, 2023
Do Not Show Up Late to the Marc Jacobs Show Lourdes Leon was apparently denied entry for arriving after the doors closed.
keeping up with the royals Feb. 3, 2023
Will Harry and Meghan Get to Go to the Coronation? Sources suspect they’ll be invited; whether or not they accept is another question.
More Stories