The Jacket Heard Round the World 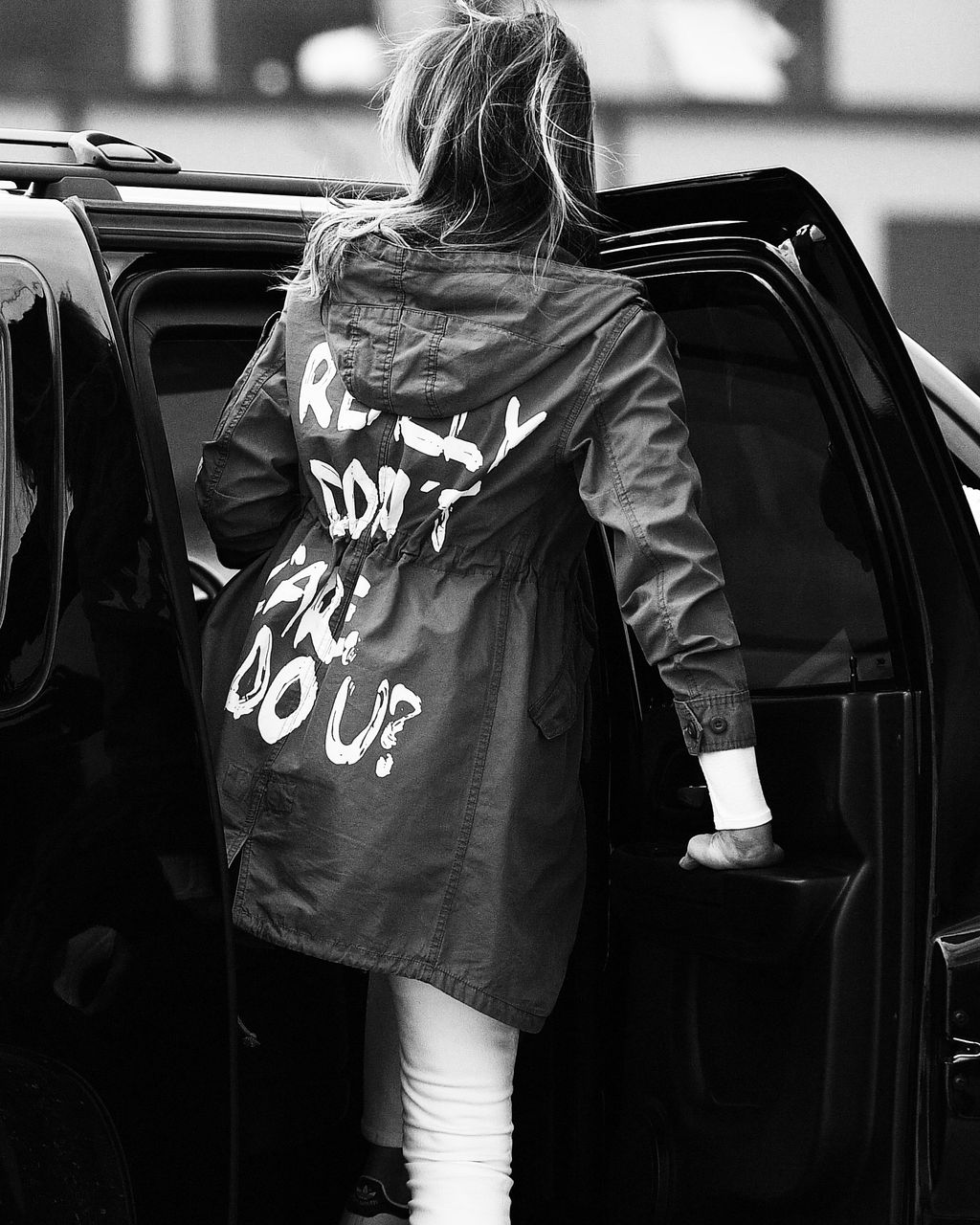 So, what did it mean, after all? The jacket, that is — Melania Trump’s now-infamous army-green Zara parka with its scrawled message in white on the back, reading “I really don’t care, do u?” which she wore en route to visit incarcerated migrant children. Although the jacket had vanished by the time Mrs. Trump arrived in McAllen, Texas (it did reappear on her way home though), its effect proved indelible.

By late yesterday afternoon, there seemed no one left without an opinion on this startling sartorial choice — with commentators falling into two main camps: It was “Melania knows what she’s doing” versus “She is totally clueless.” For those in the first camp, the fashion-savvy Melania chose her jacket purposefully — although the exact purpose remained unclear. Was she saying “I don’t really care” about incarcerated children? Expressing disregard for the journalists who parse her every move (a hypothesis floated by Vanessa Friedman)? Or could she have actually been trolling her own husband — frostily turning her messaged back to him, much as she swats his hand away from hers in public?

For those in the “clueless Melania” camp, the First Lady was merely maintaining her usual dissociative blankness, and had probably “allowed” some vengeful or tone-deaf stylist to turn her into an unwitting billboard for this administration’s trademark sentiment of callous disregard (just as she was once turned into an unwitting plagiarist of Michelle Obama, for example).

Melania’s spokesperson took refuge in disingenousness. “It’s just a jacket … no hidden message,” she assured us. She was quickly contradicted by the president himself, who insisted that Melania’s jacket was her retort to the “fake media.”

But let’s broaden our focus and look beyond the jacket’s (admittedly ghastly) message and the question of its intentionality. Instead, let’s consider the process into which it has plunged us. This entire episode is about reading and interpreting, knowing and not knowing: This jacket’s brief message has drawn us all into the task of exegesis — the critical explanation of a text. And the inscrutability of this message (and its wearer) troubles us. We feel discomfited by the struggle to understand, which managed to take over an entire news cycle. Rather than dismiss this as a trivial “fashion controversy,” we need to stop and recognize our discomfort as emblematic of our greater political moment.

Decoding messages — linguistic as well as visual, aural, tactile, etc. —is what we do every day. We talk and listen and read and watch. We communicate. This is the essence of living in a society, of having relationships, of making sense of the world. But in order to do this, we need certain ground rules. We need, for instance, a common language with generally agreed-upon meanings. And we need a certain level of trust in our own perceptions.

But the Trump administration continually subverts our common language and our faith in our perceptions. Under Trump we are becoming estranged from meaning itself.  In part this is simply because the president traffics incessantly in lies, with little regard for consistency or plausibility. He will tell us he has no choice but to rip apart immigrant families and imprison children in cages. That he is simply following an actual law, which only Congress can overturn. The next day, he signs an executive order (partly) reversing this policy, and we hear no more about that immutable “law.”

As we lose our grip on what should be easily verifiable facts (such as the distinction between a law and a policy), we also start losing our grip on words themselves, whose meanings become unusually slippery. And so, yesterday we heard officials in McAllen, Texas, tell Melania Trump that the Upbring New Hope Children’s Shelter was not a prison but a “home” with “bedrooms.” We are asked increasingly to accept obvious logical fallacy, as when a smiling Melania thanked the officials repeatedly for their “kindness” and “compassion” toward the children during “this difficult time” — with no acknowledgment that this “difficulty” had been engineered entirely by Donald Trump. Later, Melania reported that she’d found the children “eager to learn … and in good spirits” — another chillingly improbable observation.

Perhaps the officials were kind; and perhaps the detention center resembles a cheerful boarding school. But we cannot know for sure, since the First Lady’s “humanitarian” visit offered no hard evidence about the children’s living conditions. We were permitted no glimpse inside the facility, no interviews with the young residents, and no information about plans for their release — just that highly staged, agitprop of bland reassurance (which Melania performed in the white safari jacket she’d changed into, thereby retaining the paramilitary, faintly colonialist style she favors for field work among the poor and in disaster zones).

How can we reconcile such stilted propaganda with the other images we have seen — the photos of weeping toddlers or of children in cages, for example? How can we square Melania’s Stepford-wife blandishments with the soul-shaking audio we’ve heard of children shrieking in terror for their parents?

The essence of our current situation is estrangement of meaning. We see or hear one thing but are told its opposite. This disjunction creates profound distress, even a slight feeling of madness, as every day our leaders demand that we ignore or mistrust our own senses — and the work of investigative journalists — in favor of their senseless, anesthetizing narratives.

We are being ripped away from the conventions of meaning just as surely as those children are being ripped out of their parents’ arms.
This is not an idle analogy. The cruelty of mass incarceration is senseless and disorienting to those who are its immediate victims, of course, but to witness it helplessly is also cruel and disorienting. And a frightened and disoriented citizenry is more easily controlled by an authoritarian government.

To proceed with daily life while atrocities take place around you requires a strange balancing act. One reels from outrage and pain to distracted avoidance, even numbness. And what is numbness if not a tamping down, a refusal, of our own senses? A resistance to reading the messages? We cannot permit ourselves this numbness, though. We must not accept an estrangement from meaning and feeling. We need to keep trying to make sense of all messages, no matter how painful or confusing.

And so, yet again, let us credit Melania Trump with acting as our fashion unconscious. We may never know why she chose that uncharacteristic parka. But we can — and must — take note of our own reaction to it — our obsessive confusion, our anxious need to read and understand its secret, unknowable message — and observe how accurately this reaction reproduces, in microcosm, our larger emotional state. We are living in a time of secrets all around us, secrets that suggest that those in power do not “really care” about us or anything they’re doing. Let us also take note of the less-analyzed, final two words of Melania’s graffiti message, the “Do u?” and consider it a call to arms, and answer yes: Yes, we do care.

+Comments Leave a Comment
The Jacket Heard Round the World