Melania’s Recent Behavior Is Right Out of Hitchcock 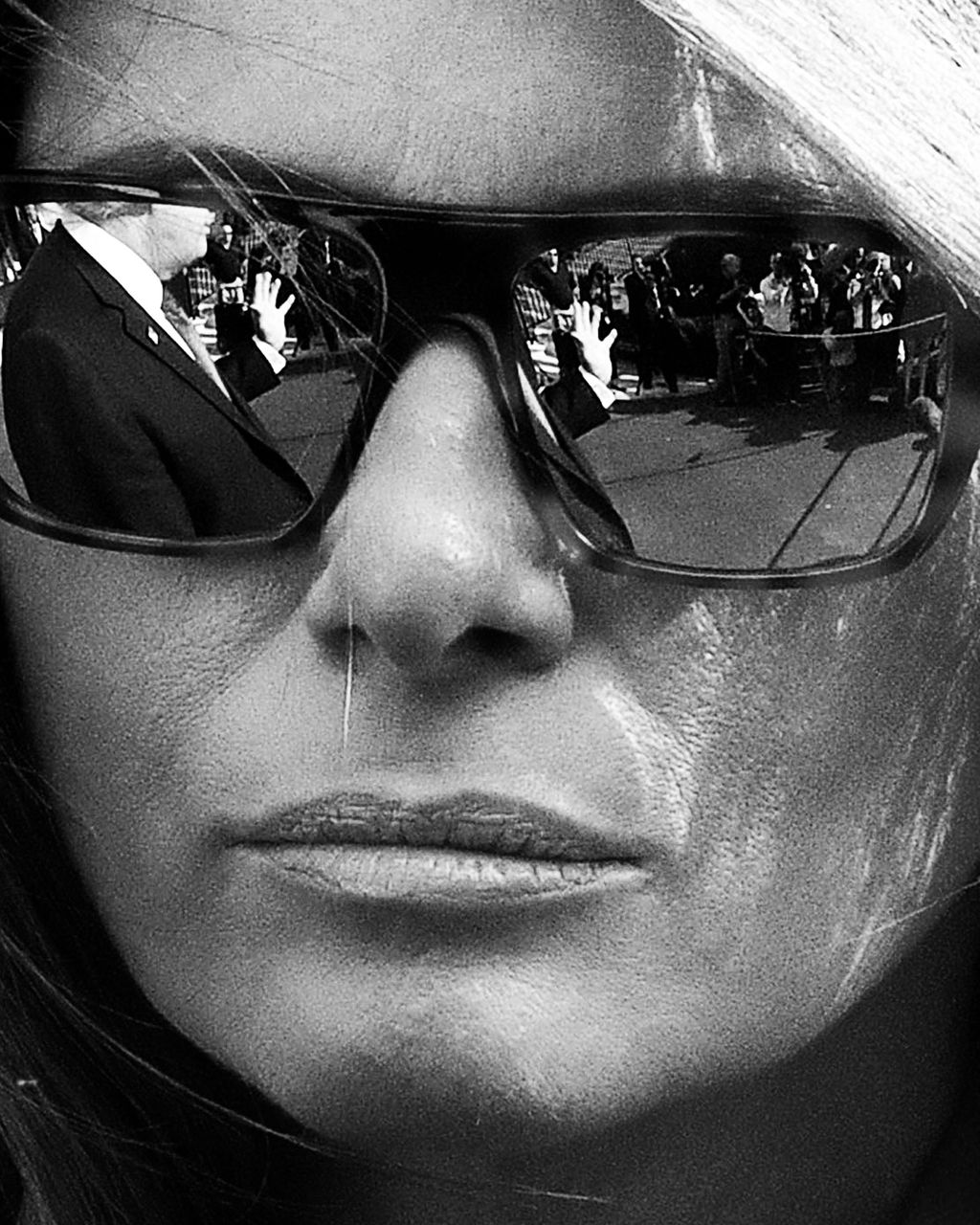 On Sunday night, Melania Trump spoke at the Ford Theatre’s annual gala, where she served as honorary chairperson. It was her first major public appearance after her lengthy, and still unexplained, disappearance from the public eye this past month.

The strangeness of this saga reminds us just how much the workings of this administration resemble classic Hollywood thrillers such as Hitchcock’s The Lady Vanishes and Rebecca or George Cukor’s Gaslight — all mystery stories surrounding a dead or missing woman, and the desperate anxiety, even near-madness, experienced by another woman trying to solve the mystery, as she grapples with physical danger as well as the deliberate lies and misdirection of those around her. In its treatment of Melania’s disappearance, the Trump administration placed us in much the same situation. We desperately tried to make sense of chaos, to fill in the void of information that opened up around an absent woman.

A lot of the excitement in watching these films comes from identifying with the baffled, imperiled heroines. Is Margaret Lockwood hallucinating or was her traveling companion really kidnapped? Can Joan Fontaine figure out what terrible fate befell her husband’s first wife, Rebecca? When will Ingrid Bergman realize she’s not losing her mind, but being “gaslighted” by evil Charles Boyer? As these characters race to make sense of chaos, so do we, dreaming up possible answers from clues provided by the movie.

To review briefly this cinematic enigma: Melania Trump enters Walter Reed to undergo, we’re told, a minor, normally outpatient, procedure for a “benign” condition, requiring — paradoxically — a one-week hospital stay. Although such a procedure would have been scheduled well in advance, the First Lady’s hospitalization was not announced beforehand, as would be customary.

At the hospital, witnesses spot Melania’s aides dressed in surgical scrubs — another peculiarity that seems to undermine the stated facts. Usually, hospital visitors change into scrubs on just a few occasions: When in the presence of an immunocompromised patient; when toxic drugs or chemicals are being used; or when their own clothes become damaged or stained — as can happen when transporting a bleeding accident victim, for example.

Melania remains unseen for nearly one month, without explanation. In an apparent attempt to deflect questions, President Trump tells the press corps that his wife is fine and “watching them” at that moment from a White House window. All turn to look, but see no one at the window — an eerie moment straight out of Hitchcock. No explanation is offered.

Upon Melania’s reemergence, the president describes her minor procedure as “a four-hour operation” — another massive contradiction neither explained or acknowledged.

The point is not that we should invade the First Lady’s privacy (which could have been protected with any simple, coherent explanation of her malady, eliding intimate details). The point is that Melania Trump is such a convenient blank space around which this administration practices weaving its inconsistent lies. She’ll be gone for a week; no, a month. She’s at the window; no, she’s not.

When such double speak appears often enough, we grow so weary, so accustomed to it, that — while we may still notice the illogic — we stop expecting clarity. Instead, we tend to project all manner of different anxieties into the void, treating it like a Rorschach test of the inner turmoil this presidency provokes in us. We speculate about a presidential divorce, about Melania having turned witness for the federal prosecutor, about her falling prey to some unmentionable violence. Some even wondered if she was still alive. We act, in other words, like the audience of a Hollywood suspense thriller, guessing at what nefarious fate has befallen an absent woman and the plot to cover it up.

Whatever occasioned the First Lady’s extended absence, this cinematic effect is what counts: We have all been left focusing on an absence, on a mysterious blankness. Directors of classic Hollywood movies knew how useful a beautiful woman could be as a magnet for our fantasies and fears. Contemplating the screen image of a threatened woman in a darkened theater, we lose ourselves in a beautiful surface, allowing her anxiety to give shape to our own.

Even when she is present, Melania feels absent, two-dimensional. She has always been a fascinating void: blank of expression, largely mute, ramrod stiff of posture. We almost never see her have a natural, interactive moment with anyone. Think about it: When have we seen her engaged in conversation? Unselfconsciously laughing? Crying? Interacting with her child? Far more than any Hitchcock heroine, Melania’s surface sheen invites us to fill in the void she represents — what is she thinking? What’s underneath the careful hair and makeup? In a way, she is more like the vanished women of Hollywood classics than the plucky heroines who try to unearth their stories; more like the uncanny portrait of the deceased first wife, Rebecca, in Hitchcock’s classic, than the living second wife who succeeds her.

Melania’s lengthy disappearance was more a matter of degree than of kind. She has always been missing, in an existential way. As is Ivanka to an extent. And Hope Hicks before them. What’s more, the fact that the mystery was medical only amplified the usual effect: To wonder what was wrong with the First Lady’s health is to think about her internal body, her interiority. Medical matters force us to think about people’s inner human functioning. By denying us even the most minimally plausible account of the First Lady’s illness and treatment, the Trump administration denied us her physical reality, confirming instead her status as pure surface, a two-dimensional being, devoid of flesh and blood — not unlike the projected shadows and light of which film heroines are made.

In her immateriality, Melania well represents the status of women under Trump — absent, frozen out, erased from the picture. This applies of course not only to those women within the administration, but to the way women in general are perceived: As inessential blank spaces, their humanity and concerns easily erased.

And beyond that, Melania represents the void that is the entire administration, which by any lights is devoid of logic, coherent policies, and finally, leadership. This is the void that leaves all of us, Americans and the rest of the world, increasingly confused, anxious, and searching. Donald Trump himself is the ultimate absent character, the ultimate void. Melania’s drama is but a deflection of this central one.

In considering this anxiety-producing, cinematic void of a presidency, perhaps we should take note of the era that produced those Hollywood spine-tinglers. The Lady Vanishes was released in 1938; Rebecca in 1940, based on the Daphne du Maurier novel of 1938. Gaslight came out later, in 1944, but was based on a 1938 British play. That is, these films about psychological torment, muted violence, lies, disappearance, and conspiracies, were all born, unsurprisingly, in Europe as the menace of fascism was taking hold.

These stories are relevant to us again today, as we face an administration exhibiting many signs of nascent fascism — violent and dangerous tendencies often cloaked beneath a theatrical, cinematic, or perhaps more precisely reality-television-style glamour. When we find ourselves consumed with lesser mysteries like Melania’s whereabouts, acting like mesmerized movie goers, we would do well to stop and recognize the spell we’re under. The key is to shake it off and address our interrogations to the other realities being obscured — the other people disappearing (such as immigrant children vanishing into warehouses, or those being callously deported by ICE). We need to seek clarity, and more crucially to expect it. Now is a time for vigilance, not passive spectatorship, no matter how compelling the drama or shiny the surface.

+Comments Leave a Comment
Melania’s Recent Behavior Is Right Out of Hitchcock
wtf 1:38 p.m.
Bryce Dallas Howard Confirms Huge Pay Disparity on Jurassic World “I was paid so much less than the reports even said.”
celebrity 12:46 p.m.
Adele Says She ‘Might As Well Be Married’ to Rich Paul “I’m not engaged. I just love high-end jewelry, boy!”
cut covers 12:08 p.m.
Amandla, Amandla, Amandla The Bodies Bodies Bodies star is the Cut’s July-August 2022 cover star.
By the Cut
gross! 11:56 a.m.
Who Told the GOP About ‘BDE’? A gubernatorial candidate claims Ron DeSantis has it. Of course he doesn’t.
obits 10:04 a.m.
Anne Heche Has Died at 53 The actor suffered severe injuries after a car crash in L.A. earlier this month.
flying high 10:00 a.m.
The Ultimate Celebrity Perk? Climate Disaster. The Twitter account @celebjets gives us insight into Kylie Jenner’s 17-minute flights.
power 10:00 a.m.
Everything to Know About the WNBA Star in Russian Custody Amid ongoing prisoner-swap negotiations between the U.S. and Russia, Brittney Griner’s legal team has appealed her conviction.
garment district 8:00 a.m.
How to Be a Fashion Designer: Sewing Not Required Oluwole Olosunde’s curriculum offers a wide-ranging crash course on the fundamentals of building a brand in the Instagram era.
how i get it done 7:00 a.m.
How Kerry Washington Gets It Done “I’m not good at compartmentalizing and only bringing part of myself into a room.”
By Faith Cummings
astrology Yesterday at 8:30 p.m.
Madame Clairevoyant: Horoscopes for the Week of August 15 As Mars enters mercurial Gemini, you may find yourself easily distracted. Fighting it will only make it worse.
By Claire Comstock-Gay
sex diaries Yesterday at 8:00 p.m.
The Artist Who’s Not Sure She Loves Her Comedian Boyfriend This week’s sex diary.
r. kelly Yesterday at 5:47 p.m.
R. Kelly Denies One of His Alleged Victims Is Pregnant With His Child After identifying herself as the singer’s fiancée, Joycelyn Savage claimed she’s pregnant with his child.
rip Yesterday at 3:51 p.m.
Freya the Walrus Was Too Good for This World The summer icon has been euthanized by Norwegian officials.
rust Yesterday at 1:40 p.m.
Everything We Know About the Rust Shooting An FBI report concludes that the trigger must have been pulled.
shopping Aug. 12, 2022
The $6 Brow Product That Changed My Eyebrows It took me almost a decade to find the perfect brow product.
fashion Aug. 12, 2022
Julia Fox Is Back! And she is giving us the latex looks we’ve been so thirsty for.
feminism Aug. 12, 2022
Who Actually Lost the Sex Wars? And were there any winners? A conversation with Christine Emba, Nona Willis-Aronowitz, and Lorna Bracewell.
friday sales Aug. 12, 2022
19 Things on Sale You’ll Actually Want to Buy: From Ninja to Isabel Marant Including the most effective foot peel and some Chuck 70’s for just $35.
i'd buy that Aug. 12, 2022
Drop Everything, Joan Didion’s Estate Sale Is Coming How much would you pay for a mohair throw that once graced her couch?
do i need this? Aug. 12, 2022
Do I Need Lori Harvey’s Gym Outfit? I couldn’t get with Pilates, but this I can do.
More Stories