Sex and the City aired its first episode on June 6, 1998. In honor of the occasion, we’re taking a look back at 20 years of SATC. Read all the Cut’s anniversary coverage here.

Sex and the City was a show born before the dawning of the age of the meme. In 1998, nobody writing the show was thinking Hey, this will play well online and get repurposed into content by fans and haters alike! Or, Hey, in 2017 Donald Trump will be president and this cameo will suddenly be weirdly prescient and relevant to a not-yet-invented micro-blogging platform! Perhaps that’s what makes SATC just so memeable: it’s wasn’t trying to be, and yet something about the the show’s wry humor and early-aughts fashion makes it ripe for internet jokes. Two decades past the premiere, SATC continues to provide seemingly endless meme fodder. In honor of the show’s 20th anniversary, we’ve ranked some of our favorites using an incredibly legitimate scale of one to five Carrie Bradshaws.

Had the Post-it note breakup between Carrie and Jack Berger happened during the Twitter era  — the episode, “The Post-It Always Sticks Twice” would have no doubt achieved full meme status. (As a refresher, Carrie’s then-boyfriend Berger, played by Ron Livingston, dumps her by writing “I’m sorry, I can’t, don’t hate me” on a Post-it and sneaking out in the dark of the night. Later in the episode, Carrie gets caught smoking pot at a party and whips out the note to prove to the cop that, yes, really, she had recently been dumped via Post-it. Which turns out to be an acceptable excuse.) What an easy gag. Write whatever you want — “Bush did 9/11,” “Team Yanny” — on a yellow Post-it and snap a picture. If you’re feeling really true to brand, snap a picture of it pressed against a car window. Instead, the Post-it remains a solid Twitter punch line.

I just want trump to leave a post-it on America that says "I'm sorry. I can't. Don't hate me."

Rating: 1 out of 5 Carries, because honestly who breaks up with somebody on a freaking Post-it. Even in 2003.

Though not a meme per se, this Instagram account “dedicated to spreading the gospel according to Miranda Hobbes” absolutely warrants inclusion on this list. The weekly screencaps, complete with the original captions from the show, of Miranda at her best/worst — who among us hasn’t thrown something unhealthy in the garbage and then considered fishing it out to eat — are both highly memeable and highly relatable.

Rating: 2 out of 5 Carries, with the potential for a higher rating if Cynthia Nixon actually fixes the subways.

She Was a Lawyer, He Was a Sandwich

Honestly there’s very little to understand about this meme other than that she — Miranda — was a lawyer and he — a dude on the street handing out flyers in a sandwich costume — was a sandwich. A sandwich! Get it? It’s funny! (In the episode itself, “Running With Scissors” from season three, which aired in 2000, Miranda gets harassed on the street — “Eat me,” the man inside the costume says as she walks by — by the sandwich, which is clearly not funny. But as a stand-alone image macro sans episodic context the humor holds up.) 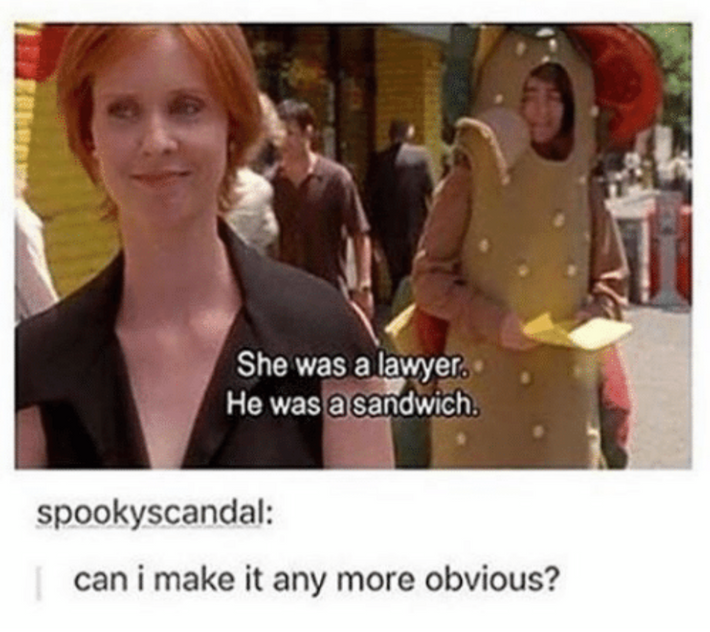 Rating: 3 out of 5 Carries for poetic simplicity and a well-placed Avril Lavigne callback.

I Don’t Need Therapy, I Have You Guys

A perfect “it me” meme for anybody who has ever held their friends as a captive audience and prattled about their problems. The meme comes from season two, episode 13: “Games People Play.” After whining about her breakup ad nauseam, Carrie’s friends suggest she get some professional help. A suggestion which Carrie initially rebukes, “I don’t need therapy, I have you guys.” When she eventually does go to therapy she ends up meeting a guy there — Seth, a.k.a. Jon Bon Jovi — and, well, naturally the two wind up sleeping together, because isn’t that what happens when you go see your therapist? You end up playing Twister — literally — with a real-life rock star playing a sex addict? Store this screencap in your camera roll for when you need a meme will make your followers nod and say “same.”

Me talking with my girls https://t.co/xoWmHsLKCY 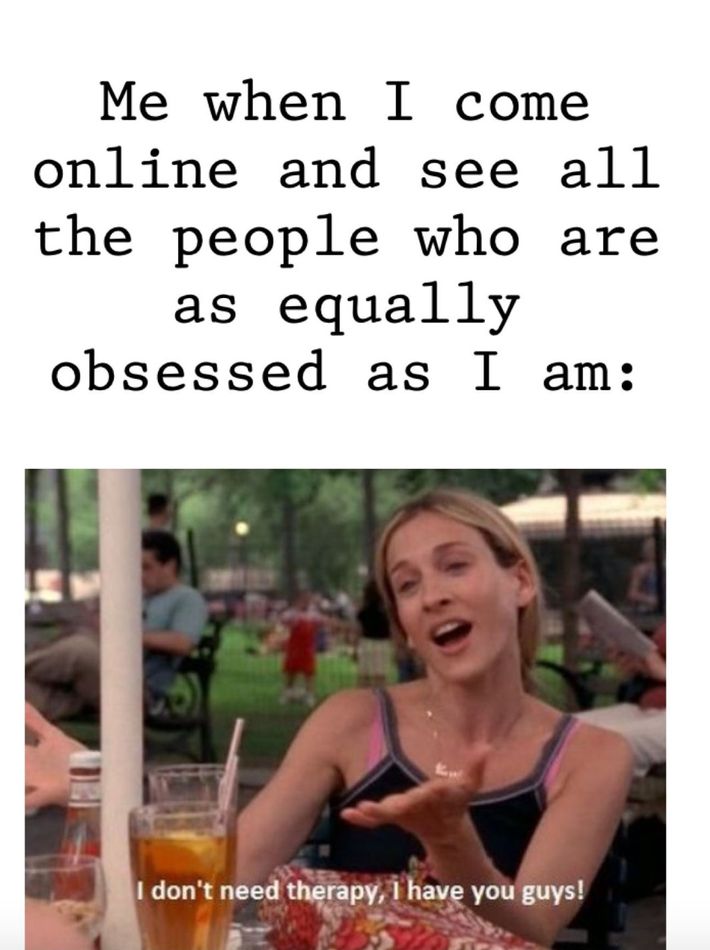 Rating: 3 out of 5 Carries, because everybody actually could probably use a therapist.

Sex and the City was categorically not woke. Woke Charlotte, the brainchild of the folks behind the @EveryOutfitOnSATC Instagram account, reimagines scenes from the show if it had been politically correct. Or rather, if Charlotte had been. Trey’s mother says something racist? Samantha says something offensive about trans people? Woke Charlotte is there to put them in their places.

Rating: 4 out of 5 Carries, because for a perfect score Charlotte would have needed to have actually been woke.

I Couldn’t Help But Wonder

No one in the history of humankind has wondered as much as Carrie Bradshaw. She wondered about orgasms. About whether “women just wanna be rescued.” About whether being single was “modern-day equivalent of being a leper.” (Gonna go ahead and give a hard no on those last two.) And now, years later, her wonder lives on every time somebody uses that iconic screencap of Bradshaw, in profile, clicking away at her computer keyboard and asking deep questions.

"And as our country entered World War III, I couldn't help but wonder...

... is it time to focus on World War Me?" pic.twitter.com/HsZy2a1MLD

i couldn’t help but wonder… had the Russian ambassador been meeting with everybody except me? pic.twitter.com/SCnYF5FquA

And at 1:37am when my phone lit up with that long-awaited "WYD" text, it made me wonder, "What AM I doing?" pic.twitter.com/D1VfCZRwQz

Rating: 5 out of 5 Carries, for ease of use and timelessness. Wonder never goes out of style.

Looking for more memes from your favorite pieces of pop culture? Check out our list of funny Bird Box memes.

The Worst Ways That Men Covered Sex and the City