Under creative director Alessandro Michele, Gucci has proven to be uncannily good at harnessing the power of social media to stoke desire for his vision. The house has especially mastered the art of building buzz on Instagram—the platform most closely linked to our luxury aspirations—with unexpected artist collaborations. This week, Gucci debuts its most ambitious yet: #TimeToParr, an Instagram-only portfolio by famed British documentary photographer Martin Parr that’s both a celebration of the brand’s new timepieces, and a world tour of the “Gucci Places” that inspire Michele.

But the choice of Parr reveals that this won’t be your typical gauzy, removed-from-reality fashion campaign. Best known for his candid, playful portraits of working-class Brits relaxing seaside, and the global ultra-wealthy as they shop and socialize, Parr’s work takes an arch look at how we concept class, leisure, luxury, and travel. If those meanings are easy to miss on the surface, don’t be fooled. Parr’s work is anthropology—it only looks accidental.

Parr’s portfolio takes us inside Gucci Places from Harlem to Hong Kong, and features people caught in thought or quotidian action. If most street photographers specialize in the “decisive moment,” Parr’s habitat is all the other moments—the ones no less telling that, after all, make up the bulk of our time. Like Michele, Parr’s point of view both celebrates and sends up the Gucci mythos. The resulting images are a refreshing antidote to the obsessively composed, ruthlessly curated images churned out by most aspirational brands—and that fill your Instagram feed. 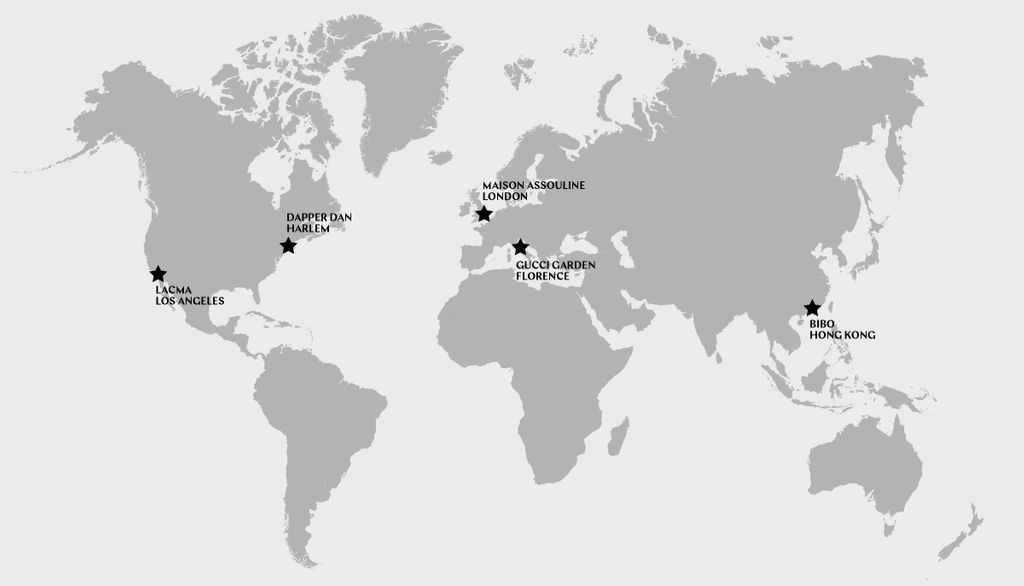 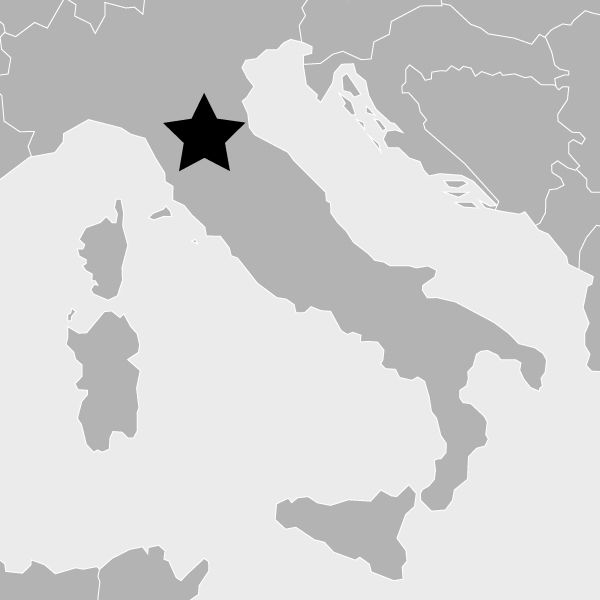 One of the most noteworthy stops on Parr’s world tour of Gucci Places is Florence’s Gucci Garden. This historic space was totally reimagined by Michele and curator Maria Luisa Frisa, and now features a boutique selling exclusive items, a dramatic green-walled restaurant helmed by a thrice Michelin-starred chef, and a museum of historical garments, advertising, and other ephemera. It’s a one-stop shop for the Gucci obsessive, and a love letter to the history and present of the house.

(1) One of Parr’s photographic signatures is highlighting the gap between, as he puts it, “the mythology of a place, and its reality.” In this case, he shows us that no visit to a European landmark—not even one as rarefied as Florence’s Palazzo della Mercanzia—is without terrifyingly persistent pigeons.

(3) The Gucci Eye–both a classic house motif and the official symbol of the Gucci Garden–is featured on everything from jackets and vases, to the giant eye projected in pink on the outside of the Gucci Garden building at night. Here, Parr uses it as a backdrop for a G-Timeless watch featuring the house’s classic serpentine motif. 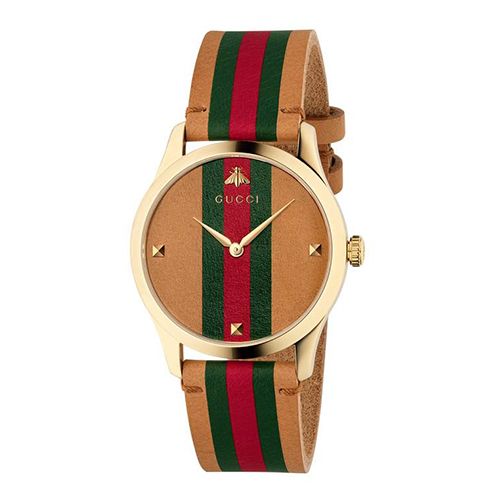 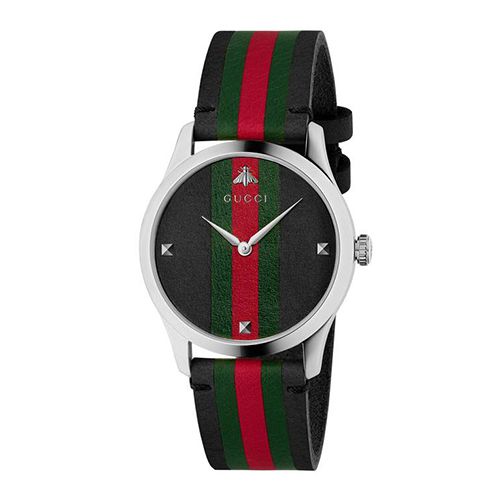 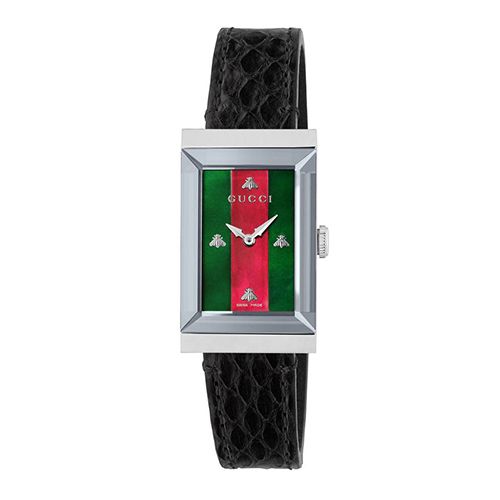 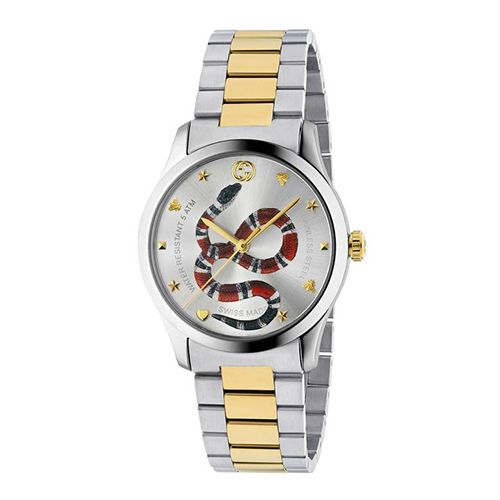 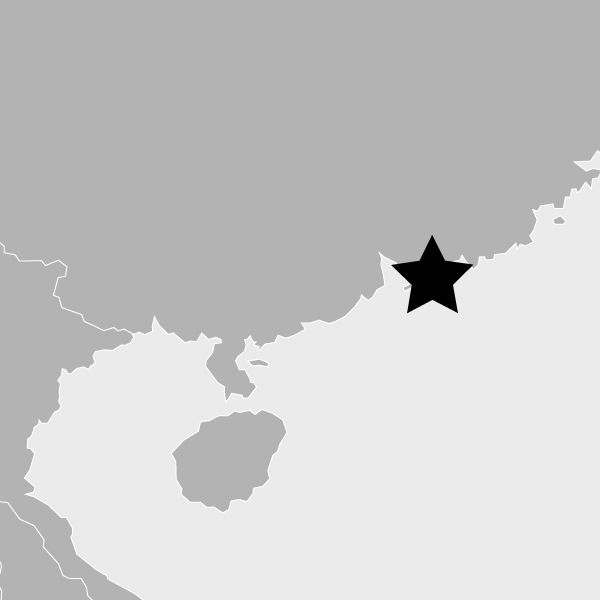 Bibo is a restaurant in Hong Kong that serves classic French gastronomy in a 1930s-inspired dining room decorated with pieces by the luminaries of the modern and street-art world. Does that sound like a riot of contradictions? Yes, and that’s probably the point. It also makes the restaurant the perfect backdrop for the magpie eye of Michele and Parr.

(2) Meanwhile outside, a modern-day denizen of Hong Kong models the artful G-Frame timepiece as part of a full-on, head-to-toe Gucci look—and enjoys a snack only a smidge less fancy than those Bibo’s serving.

(3) Parr’s detail of a tattooed Bibo customer sporting the G-Frame watch in Gucci’s iconic green and red web catches the contrast between edgy and extravagant that says a lot about where luxury is in 2018. 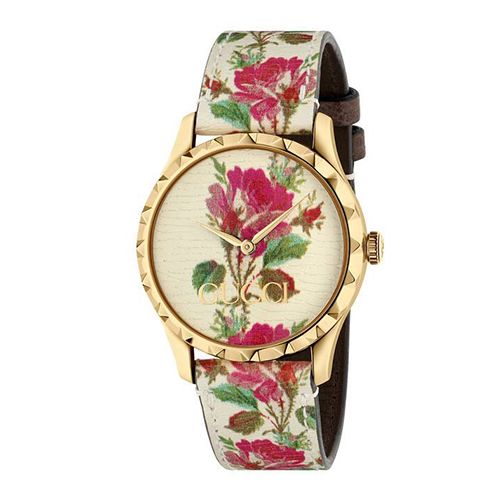 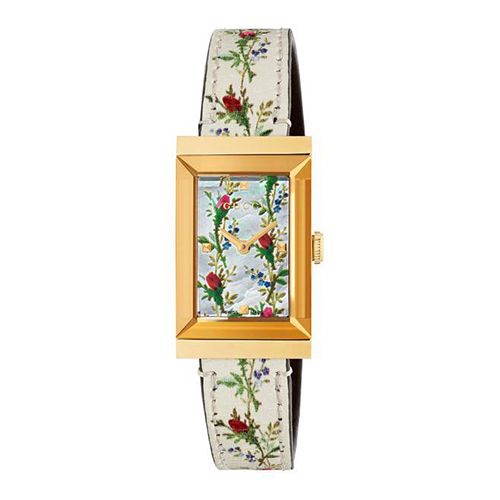 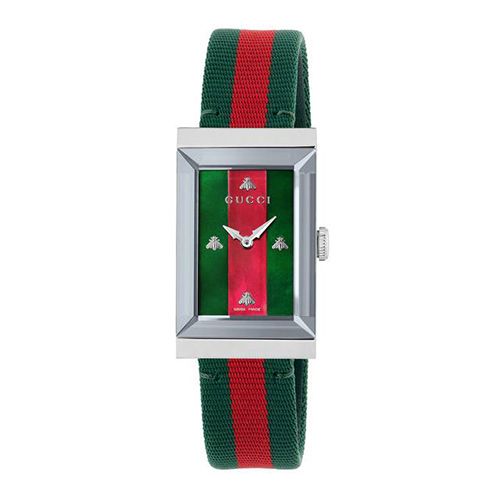 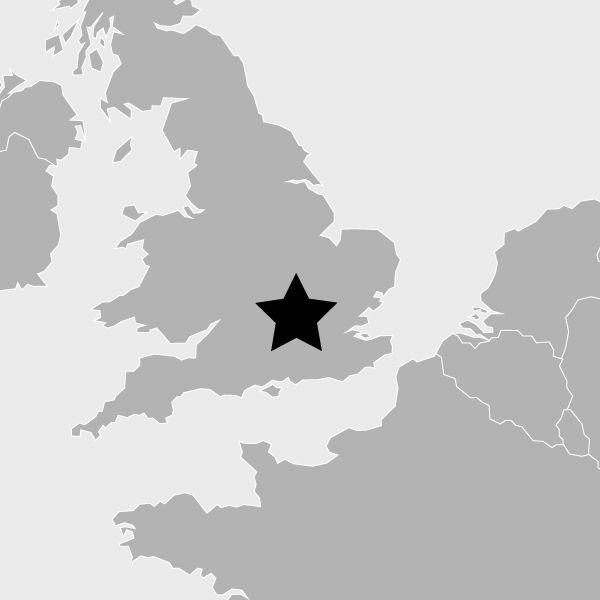 When it opened in 2014, Maison Assouline brought more than just the world’s fanciest bookstore to London—it brought a full-on oasis of culture to the din that is Piccadilly. Now locals and far-flung visitors alike can duck into this landmark 1922 building to shop its expertly-curated selection of art monographs, uber-rare first editions, custom furnishings, antiques—or just to escape the tourist throngs.

(1) With this campaign, Gucci is, quite literally, playing with time. Filtered through Parr’s arch lens, that translates to the G-Timeless watch juxtaposed with the crossing light’s flat admonishment to WAIT. We see what you did there, Martin, and after the British custom, we’ll sigh gently to ourselves and wait for these double-deckers to pass.

(2) The women’s G-Timeless in yellow gold, featuring a feline head in front and a hidden bee engraving on the reverse. Per Parr’s suggestion, it may even be worn atop one’s opera gloves.

(3) Go ahead and judge Maison Assouline by its cover. As the triptych on its stately facade notes, inside you’ll find all manner of culture, a cozy cocktail nook known as Swans Bar, and of course, books covering every possible facet of the fabulous life. A bougie bibliophile’s heaven. 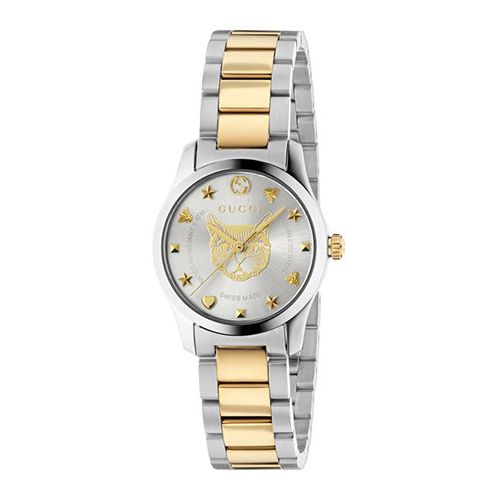 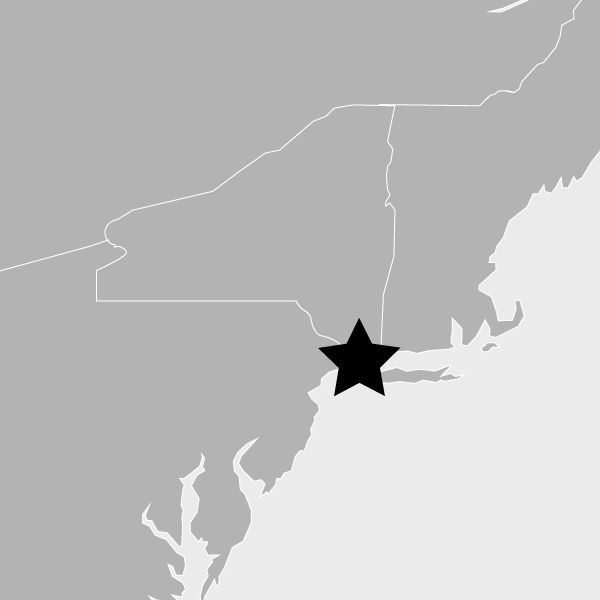 Under Michele, it’s finally all love between Gucci and the don of Harlem hip-hop fashion, Dapper Dan. Twenty-five years after the closing of Dapper Dan’s Boutique over the designer’s alleged (ahem) extra-legal use of luxury logos, Gucci partnered with Dan to open a brand-new atelier on Harlem’s famed Lenox Avenue. There, Dapper Dan conceived his brand-new Gucci collab, and those seeking a taste of the fabulous life can once again be fitted for bespoke Gucci garments from bucket hats to boots.

(1) Harlem’s changed a lot since Dapper Dan first opened his boutique there in 1982. Whether all that change is a good thing is a matter of some debate. But the fact that it’s a hell of a lot easier to get a cab above 110th Street these days—that’s something we can get behind.

(3) Parr captures the G-Frame watch featuring the house’s iconic jacquard stripe motif nestled atop a bed of Gucci fabric scraps that are undoubtedly being spun into gold by Dapper Dan as we speak. 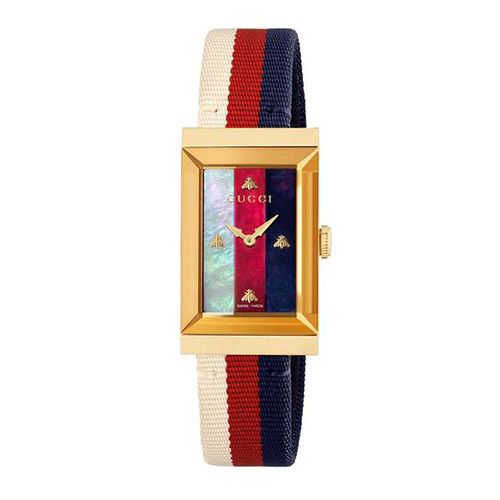 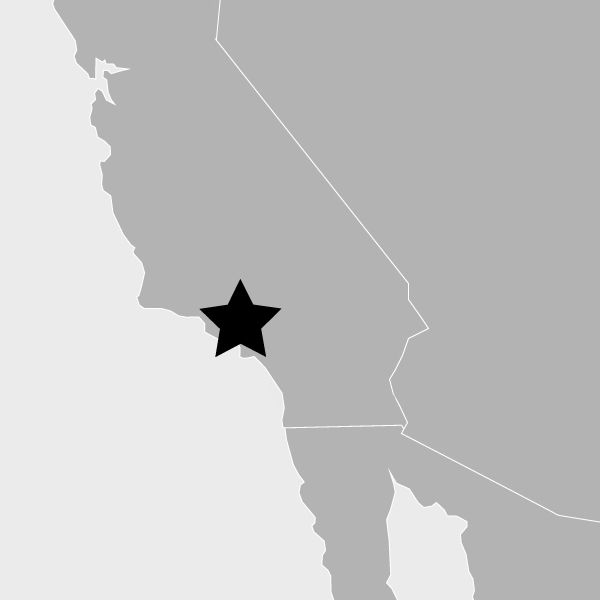 If you don’t know Los Angeles’ premier art museum as a visitor, or as the site of Gucci’s annual Art + Film Gala, you surely recognize the unmistakable sawtooth roof of its Renzo Piano-designed building, or Chris Burden’s Urban Light installation featuring ghostly rows of white-painted antique street lights. If a tourist visits LACMA and does not produce a selfie with one of these in the background, did it even happen?

(1) LACMA’s courtyard features a garden of 100 palm trees designed by artist Robert Irwin and landscape architect Paul Comstock. It’s a tribute to one of the iconic sights of Southern California—and, understandably, a pooch paradise.

(2) In LACMA’s courtyard, Parr captures a patron’s brief communion with the eternal in a moment that maybe-intentionally nods to Michelangelo’s “The Creation of Adam.”

(3) Rodin cast many versions of his famous “The Thinker” statue and sadly, none of them are held among LACMA’s vast collection. But Parr’s capture of a museum-goer deep in contemplation offers us a modern—and much more fashionable—take on the theme. 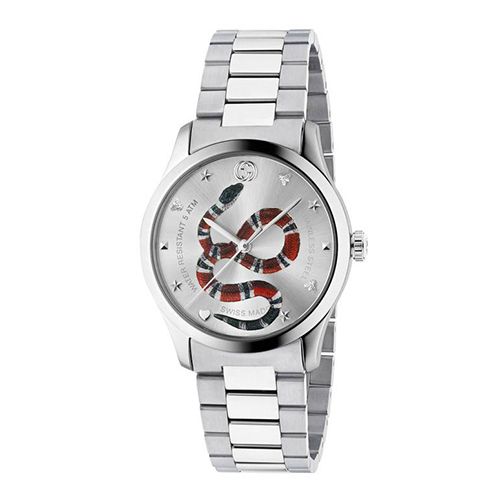 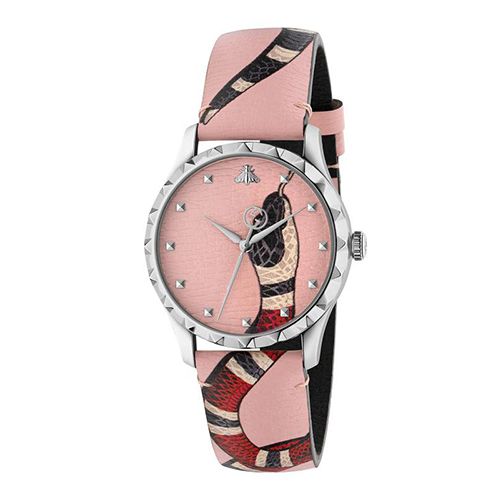 All photography by Martin Parr for Gucci.

This is paid content produced for an advertiser by New York Brand Studio. The editorial staff of the Cut did not play a role in its creation.

Join Gucci and Martin Parr on a Tour of the World
review Yesterday at 1:59 p.m.
At Gucci, Double the Clothes But Little Direction “Clothes are not enough today,” says Alessandro Michele backstage, as he grappled with the modern conditions for a creative director.
By Cathy Horyn
always shopping Sept. 23, 2022
22 Affordable Sweaters That Look Expensive The best way to prepare for sweater season without spending a fortune.
By Brooke LaMantia and Andrew Nguyen
fashion Sept. 23, 2022
Seeing Double at Gucci As a tribute to his mother, Alessandro Michele cast all twin models.
crime Sept. 23, 2022
Ryan Grantham Has Been Sentenced to Life in Prison The Riverdale actor killed his mother in March 2020.
mfw spring 2023 Sept. 23, 2022
The Best Street Style at Milan Fashion Week Chic looks from this fashionable city.
less work Sept. 23, 2022
How About a 4-Day Workweek Already? The largest study to date shows that many employees who work a shorter week are actually more productive.
best in class Sept. 23, 2022
The 15 Very Best Plush Mattress Toppers Think of a plush mattress topper like fluffy, sumptuous icing for your mattress cake.
By Latifah Miles
best in class Sept. 23, 2022
15 of the Very Best Water Bottles Always be hydrating.
By Emma Wartzman
are u coming? Sept. 23, 2022
Richie Akiva Is No Longer the King of Nightclubs, Okay? His post-pandemic move: a celebrity-packed … members-only club.
By Brock Colyar
review Sept. 23, 2022
At Prada, Subtle Sex and Modern Minimalism Raf and Miuccia play with “gestures of error” in their cinematic show.
By Cathy Horyn
parties! Sept. 23, 2022
Katie Holmes, Chloë Sevigny, and More of the Bestest Party Pics This Week  Chanel, Mejuri, and more celebrate.
lies Sept. 23, 2022
Alex Jones Is Back in Court for Sandy Hook Lies A Texas jury already hit the Infowars host with nearly $50 million in damages.
fashion friend Sept. 23, 2022
Hey, Fashion Friend: Are Ballet Flats Back? Technically, yes, but you don’t have to wear them.
how i get it done Sept. 23, 2022
How Street-Style Photographer Christina Fragkou Gets It Done During Fashion Week “If my headphones are not in and the music is not pumping: I’m asleep or I’m crying.”
By Brooke LaMantia
extremely online Sept. 23, 2022
I Can’t Shut Up About Brad Pitt’s Sculptures As if the man doesn’t have enough!
holiday gifts Sept. 23, 2022
What to Gift the Gen-Zer in Your Life According to a member of this generation.
¡hola papi! Sept. 23, 2022
‘How Can I Learn to Be More Present?’ When we accept that there are things beyond our control, it’s easier to live in the moment.
By J.P. Brammer
oh good Sept. 22, 2022
Johnny Depp Is Reportedly Dating His Trial Lawyer But not the one you think.
is this flirting? Sept. 22, 2022
Adam Levine Only Has Adam Levine to Blame Sumner Stroh may have accused him of cheating and sending deranged texts, but it’s not the “other woman” who’s the problem.
By Claire Lampen
review Sept. 22, 2022
A New Energy at Milan Fashion Week Diesel gives Gen Z what it wants and Kim Jones of Fendi shows a fresh look.
By Cathy Horyn
More Stories