Both Meghan Markle and Emma Watson decided to go with white, wide-leg palazzo pants for the Wimbledon women’s singles finals — standing out from the parade of classic shift dresses and demure prints. However, the two style icons took their looks in very different ways.

Meghan, in head-to-toe Ralph Lauren with a Maison Michel hat, looked very California-girl-turns-Duchess-of-Sussex. Her signature messy bun had perfectly placed tendrils “falling” out of it, and the fedora added a jaunty, carefree touch (though she didn’t actually wear it during the match).

Meghan is wearing a new panama hat today by @maisonmichel! Their Virginie hat, shown here in a red stripe: https://t.co/NPBG3K6D8T (thanks to @anngeogialeigh!) pic.twitter.com/Ejy2VuLQhA

Emma, on the other hand, took a fashion risk in a three-piece white suit that wouldn’t look out of place on an extra in The Great Gatsby, the Baz Luhrmann edition. And it was fabulous. The flat-top hat was especially vintage-inspired and also from Maison Michel. However, the look became modern when Watson took off her jacket during the match. 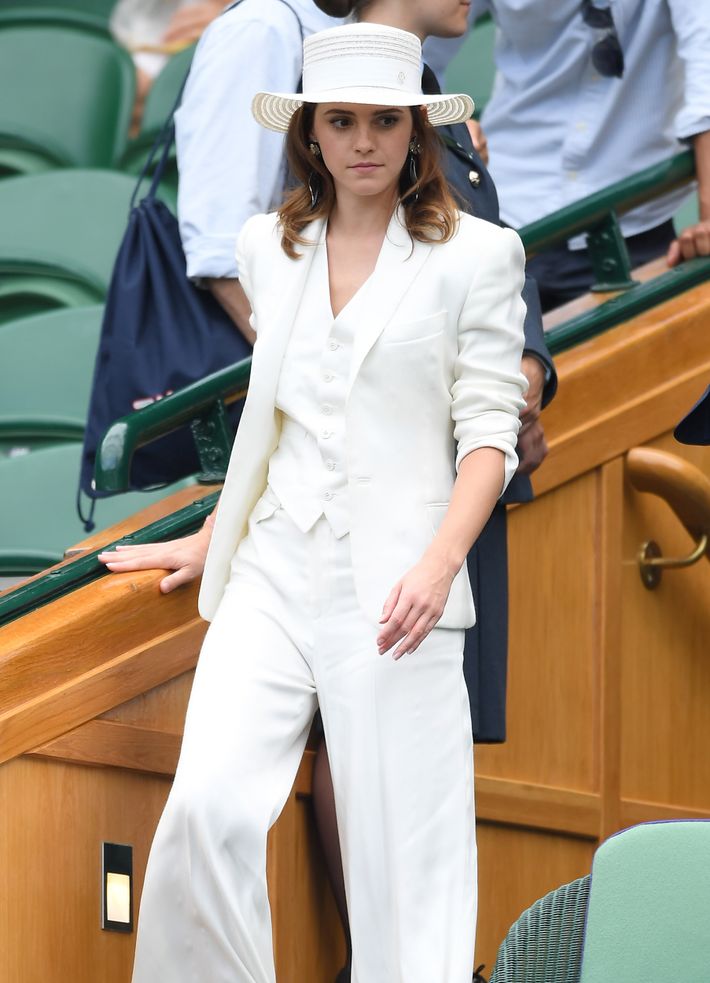 Meghan and Emma, you’re in the same country now. Get together and swap fashion tips.

cut covers 12:08 p.m.
Amandla, Amandla, Amandla The Bodies Bodies Bodies star is the Cut’s July-August 2022 cover star.
By the Cut
gross! 11:56 a.m.
Who Told the GOP About ‘BDE’? A gubernatorial candidate claims Ron DeSantis has it. Of course he doesn’t.
obits 10:04 a.m.
Anne Heche Has Died at 53 The actor suffered severe injuries after a car crash in L.A. earlier this month.
flying high 10:00 a.m.
The Ultimate Celebrity Perk? Climate Disaster. The Twitter account @celebjets gives us insight into Kylie Jenner’s 17-minute flights.
power 10:00 a.m.
Everything to Know About the WNBA Star in Russian Custody Amid ongoing prisoner-swap negotiations between the U.S. and Russia, Brittney Griner’s legal team has appealed her conviction.
garment district 8:00 a.m.
How to Be a Fashion Designer: Sewing Not Required Oluwole Olosunde’s curriculum offers a wide-ranging crash course on the fundamentals of building a brand in the Instagram era.
how i get it done 7:00 a.m.
How Kerry Washington Gets It Done “I’m not good at compartmentalizing and only bringing part of myself into a room.”
By Faith Cummings
astrology Yesterday at 8:30 p.m.
Madame Clairevoyant: Horoscopes for the Week of August 15 As Mars enters mercurial Gemini, you may find yourself easily distracted. Fighting it will only make it worse.
By Claire Comstock-Gay
sex diaries Yesterday at 8:00 p.m.
The Artist Who’s Not Sure She Loves Her Comedian Boyfriend This week’s sex diary.
r. kelly Yesterday at 5:47 p.m.
R. Kelly Denies One of His Alleged Victims Is Pregnant With His Child After identifying herself as the singer’s fiancée, Joycelyn Savage claimed she’s pregnant with his child.
rip Yesterday at 3:51 p.m.
Freya the Walrus Was Too Good for This World The summer icon has been euthanized by Norwegian officials.
rust Yesterday at 1:40 p.m.
Everything We Know About the Rust Shooting An FBI report concludes that the trigger must have been pulled.
shopping Aug. 12, 2022
The $6 Brow Product That Changed My Eyebrows It took me almost a decade to find the perfect brow product.
fashion Aug. 12, 2022
Julia Fox Is Back! And she is giving us the latex looks we’ve been so thirsty for.
feminism Aug. 12, 2022
Who Actually Lost the Sex Wars? And were there any winners? A conversation with Christine Emba, Nona Willis-Aronowitz, and Lorna Bracewell.
friday sales Aug. 12, 2022
19 Things on Sale You’ll Actually Want to Buy: From Ninja to Isabel Marant Including the most effective foot peel and some Chuck 70’s for just $35.
i'd buy that Aug. 12, 2022
Drop Everything, Joan Didion’s Estate Sale Is Coming How much would you pay for a mohair throw that once graced her couch?
do i need this? Aug. 12, 2022
Do I Need Lori Harvey’s Gym Outfit? I couldn’t get with Pilates, but this I can do.
breakups Aug. 12, 2022
Michelle Branch Announces Her Separation From Black Keys’ Patrick Carney Branch was arrested for misdemeanor domestic assault shortly after the announcement.
selling sunset Aug. 12, 2022
Looks Like Jason Oppenheim Has Also Moved On Surprise: His new girlfriend isn’t an O Group agent.
More Stories