Earlier today, Pete Davidson deleted all of the photos from his Instagram, prompting panic from Grandson shippers everywhere. Deleting one’s social-media history is often the first indicator of a celebrity breakup, which is always a concern when your relationship is a month long and was forged over tattoos and mutual Harry Potter fandom.

But fans of the couple can rest easy. It turns out that Davidson did not delete his online presence because his real life is in shambles; he deleted it because, like New York Times writer Maggie Haberman, he is tired of social-media negativity. (Recently the SNL star has been in some online skirmishes with online haters, including the Ariana Grande fans who disapprove of their relationship.)

Also, because his real life is “fucking lit.” 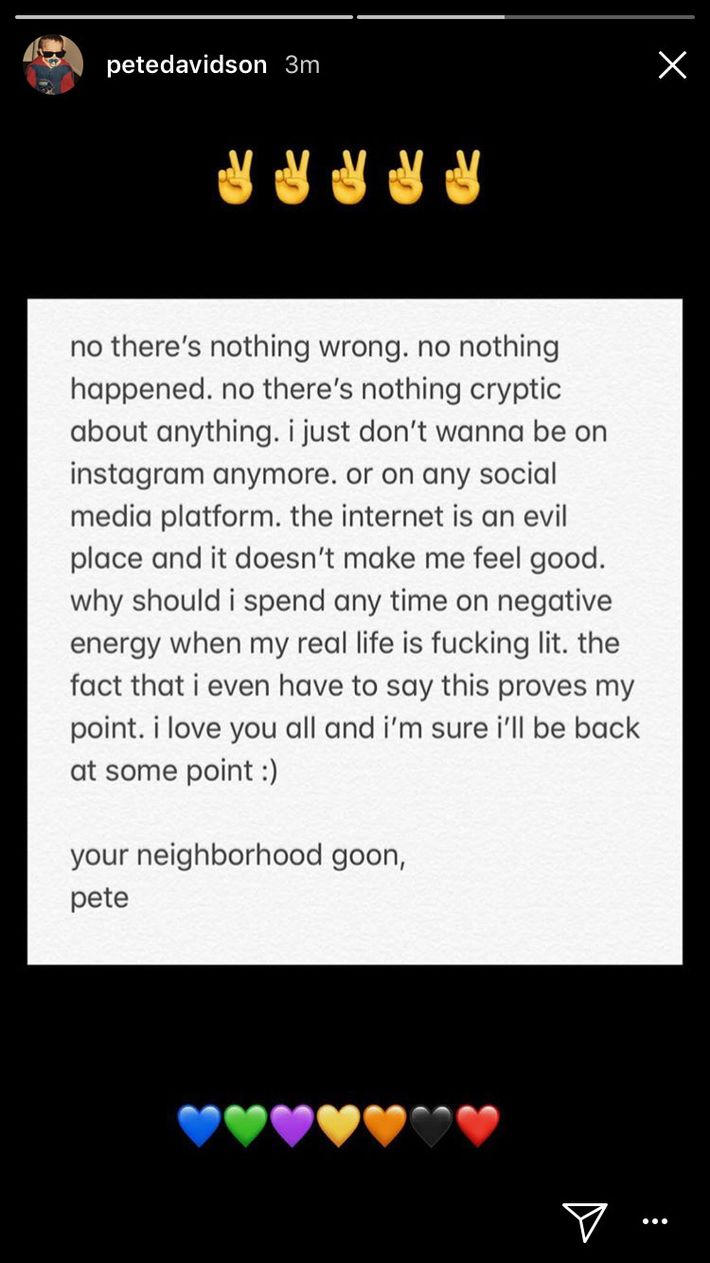 Being lit on Instagram? So passé. Being too lit for Instagram? Now that is lit. Congratulations to Pete Davidson on being so fucking lit.

style 52 seconds ago
H&M Is Being Sued for Greenwashing. Why? Sustainability as a marketing tactic could go extinct. And maybe it should.
5 questions with... 9:07 a.m.
Sharon Horgan Wants to Get Out of Her Comfort Zone The Bad Sisters creator and star can’t help but try to do it all.
sustainability 8:00 a.m.
Where to Sell Secondhand Clothing: A Guide Hint: It’s not the RealReal.
life after roe 7:00 a.m.
The Abortion Clinics Staying Open in Hostile States Some providers are pivoting to offer gender-affirming care, birth services, and other aid patients won’t get at crisis-pregnancy centers.
¡hola papi! 6:00 a.m.
‘My Average Life Is Smothering Me’ You don’t need to blow the whole thing up. You just need a pressure valve.
By J.P. Brammer
celebrity Yesterday at 5:41 p.m.
We Support the Statement Thong Thank you to Doja Cat for championing this look.
sexual misconduct Yesterday at 4:19 p.m.
Deshaun Watson Suspended Over Sexual-Misconduct Allegations Following an appeal, the quarterback was fined $5 million to be donated to organizations that prevent sexual assault.
but why tho Yesterday at 4:03 p.m.
Kourtney Kardashian Really Loves a Bathroom Photo Shoot Her latest photo dump includes way too many urinals.
wait what is happening on tiktok? Yesterday at 4:00 p.m.
The Kids Are Stealing Cars on TikTok Now Meet the “Kia Boyz.”
model behavior Yesterday at 1:59 p.m.
Linda Evangelista Returns to Modeling in British Vogue The model posed for her first major fashion cover since revealing she was permanently disfigured from CoolSculpting.
collaboration station Yesterday at 12:47 p.m.
Welcome to the Inside of Ye’s Mind. He’s Making ‘No Apologies.’ Here’s a look inside Yeezy x Gap’s Times Square takeover.
marriage Yesterday at 12:41 p.m.
The World Will Soon Have Two Taylor Lautners The Twilight star says his fiancée, also named Taylor, will take his last name.
life after roe Yesterday at 12:39 p.m.
What Abortion Actually Looks Like Two doulas set out to demystify the process by documenting their clients’ experiences.
By Megan Paetzhold
celebrity weddings Yesterday at 11:20 a.m.
Bennifer Is Getting Married (Again) The follow-up party to their small Vegas wedding is happening this weekend in Georgia.
celebrity Yesterday at 11:03 a.m.
Amy Schumer’s Mental-Health Parody Did Not Go Over Well She has since clarified that she did not intend to mock Tom Holland.
the internet Yesterday at 11:00 a.m.
The Beginning of the End of Millennial Discourse No one is talking about what they think they’re talking about.
By Michelle Santiago Cortés
divorce Yesterday at 10:50 a.m.
Alexis Bledel and Vincent Kartheiser Are Getting Divorced The couple met on the Mad Men set in 2012.
fashion friend Yesterday at 10:00 a.m.
Hey Fashion Friend: I Want to Shop Sustainably and Affordably Here’s how to spend less while shopping sustainably; brands include Everlane, Lacausa, Girlfriend Collective, and more.
sustainability Yesterday at 8:00 a.m.
Nadya Okamoto Wants to Talk About Periods The 24-year-old founder of sustainable period-care brand August breaks down the stigma about periods and the importance of sustainability.
mental health Aug. 17, 2022
Jonah Hill Takes a Break From Press Tours Due to Anxiety He directed and starred in an upcoming documentary, Stutz.
More Stories