The Thai Cave Rescue Cannot Save Us From National Shame

Countless other children are still trapped by the U.S. government. 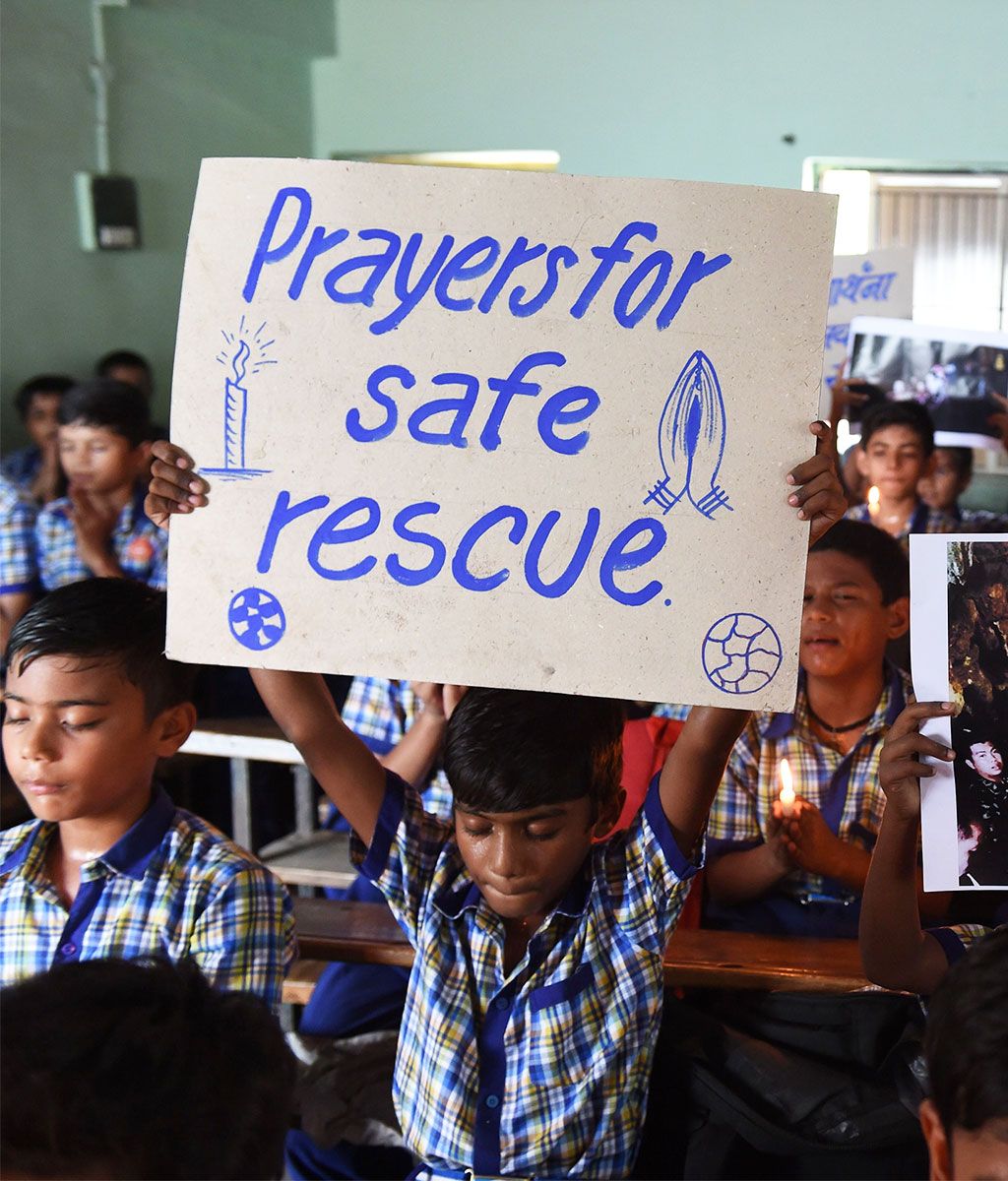 In the past month, an epic humanitarian crisis utterly transfixed America: the plight of a group of children stranded in a place entirely alien to them, cut off from the outside world, and with no idea of how — or if — they’d ever see their families again. The children had no place to bathe or sleep, and barely any food. At night, cold and frightened, they slept on rock-hard floors. Every day they grew weaker. Every day their desperate parents grew more frantic, praying for a miracle.

Such was the situation in Thailand for several long weeks, and America breathlessly kept up with the story via round-the-clock media coverage. We studied diagrams of the cave, agonized over dropping oxygen levels, the coming monsoons. We empathized with the parents’ agonizing wait. We seemed to be living the crisis in real time, minute by minute, with its victims.

When we learned that all 12 kids and their coach had been successfully — astonishingly — saved, we rejoiced: The entire world had come together — sparing no expense — to avert a great tragedy.

On one level, our fascination with the Thai soccer team seems perfectly understandable: It was a riveting, even cinematic story. But there is more to America’s weeks-long obsession with this event than simple human interest. In fact, the saga of the lost Thai boys mirrors uncannily the situation of the thousands of migrant children being held in unspecified detention centers throughout our country.

Incredibly, these two humanitarian crises unfolded at the same time, both involving lost, stranded, desperate children unable to reunite or communicate with their families. Both involved a looming threat of permanent loss — of death, of families destroyed, of grave illness or injury. But at least we had information about the Thai children: We had photos and video and interviews with experts. Every child’s name and age was known. And we knew that the finest minds in the world were at work on the problem, that America was stepping up: the U.S. government sent military personnel to help. Our own tech guru, Elon Musk, had even dreamed up fantastical, sci-fi miniature submarines to save the kids (although these were not used, ultimately).

And so, as agonizing as the story in Thailand was, we felt reassured that the world, including our own country, was responding kindly, rationally, humanely. For all its inherent despair and anxiety, the situation made sense: Innocent children were in danger and families were suffering. In response, decent, smart people were trying their utmost to help them.

Focusing on the Thai children, we permitted ourselves many of the emotions we continually push aside in the case of these migrant children, because at least the grief and despair we felt were untainted by shame and guilt. No vicious crime or racist disregard had placed those children in the cave. It was an accident. And however terrifying their predicament, we could feel the world rooting for a happy outcome.

Sadly, the same cannot be said of the 2,000+ migrant children and babies currently languishing in their own version of remote caves. They did not stumble into those centers; they were sent there deliberately, with no exit plan.

And oddly, we have far less intel on those American child-detention centers than we did on a flooded cave deep underground in Thailand. We have no videos of toddlers being herded into cages. No diagrams of their living conditions. And where on Earth are the experts working on the puzzle of matching parents up with their missing children? Elon Musk won’t be called in on this one, nor will any other geniuses, because our government is not actively seeking solutions to ease the suffering, which it has intentionally inflicted.

No wonder we focused on the Thai children’s crisis instead of the one in our own country.

The story of the Thai soccer team rescue is cause for joyous celebration: It reminds us of humanity’s capacity for empathy and compassion, of the power of perseverance, hope, and critical intelligence.  It also provides a kind of corrected image of our current, ongoing crisis. The only difference between those migrant children, stranded thousands of miles from their homes and families and the Thai kids trapped in a cave lies in how we frame and perpetuate their stories. It is urgent that we train as bright and persistent a light on the migrant children as we did on those soccer players. To do so may dredge up our own shame and guilt along with anxiety and despair. So be it.

recommendations 22 mins ago
We Should All Be Wearing House Shoes A foolproof way to avoid bringing a dustpan’s worth of dirt into your bed.
k-i-s-s-i-n-g 10:00 a.m.
Lexi and Fez, Sitting in a Tree Could this be Euphoria’s most unexpected romance?
buzz buzz buzz 9:00 a.m.
All Our Burning Questions From the Yellowjackets Finale Some of the biggest mysteries remain unraveled.
how i get it done 7:00 a.m.
How Milk Bar’s Christina Tosi Gets It Done “More colorful, more magical, and more rule-breaking.”
By Kristen Bateman
astrology Yesterday at 8:30 p.m.
Madame Clairevoyant: Horoscopes for the Week of January 17 Aquarius season begins this week, and there’s a full moon in sensitive Cancer.
By Claire Comstock-Gay
sex diaries Yesterday at 8:00 p.m.
The Mom Trying to Meet Her Online Boyfriend IRL This week’s sex diary.
celebrity Yesterday at 6:33 p.m.
Britney and Jamie Lynn Call a Truce in Feud Over Claims in Jamie Lynn’s Book The latest in the ongoing Notes app saga.
kimye Yesterday at 6:13 p.m.
The Ups and Downs of Ye’s Dramatic Weekend From a tell-all interview to the saga of Chicago’s fourth birthday party.
news Yesterday at 3:15 p.m.
Everything We Know About The Texas Synagogue Hostage Situation The suspect has been killed, but a motive remains unclear.
vaccines Yesterday at 1:00 p.m.
Australia Is Now Djokovic-Free Unvaccinated tennis star Novak Djokovic is out.
yellowjackets Jan. 15, 2022
Misty From Yellowjackets Is the Scariest Character on TV Beware the quiet ones.
culture Jan. 14, 2022
Jerry Harris Was Our Hero He was the most-loved cheerleader on Cheer’s premiere season. Season two charts his downfall.
friday sales Jan. 14, 2022
19 Things on Sale You’ll Actually Want to Buy: From Aesop to Crocs Including a dog collar that’s rarely on sale and one of our favorite portable speakers.
beauty Jan. 14, 2022
How Gym Culture Went From Punishing to Meditative People are starting to insist that exercise focus on mental health, not be an obligatory regimen that will change the way they look.
celebrity Jan. 14, 2022
Neve Campbell Was Once Attacked by a Bear on a Movie Set “They said dip your hand in honey and just run.”
bffs Jan. 14, 2022
In Yellowjackets, Female Friendship Is Horrific That’s why I like it.
celebrity Jan. 13, 2022
Britney Spears Accuses Jamie Lynn of Using Her to Sell Books Yes, she’s seen the GMA interview.
celebrity couples Jan. 13, 2022
Julia Fox and Ye Aren’t Doing Labels, Because of Course Not And they’re definitely not a PR stunt, says Julia Fox.
what the what Jan. 13, 2022
I Joost Loove Joots Both Julia Fox and Kim Kardashian wore “pantaboots” in the same week.
rust Jan. 13, 2022
Rust Shooting Investigators Are Waiting for Alec Baldwin’s Phone Alec Baldwin defends his cooperation with the investigation as another lawsuit emerges.
More Stories