The Kinds of Monsters I Used to Date

It’s hardest to contend with men whose main focus is to not seem like a monster. 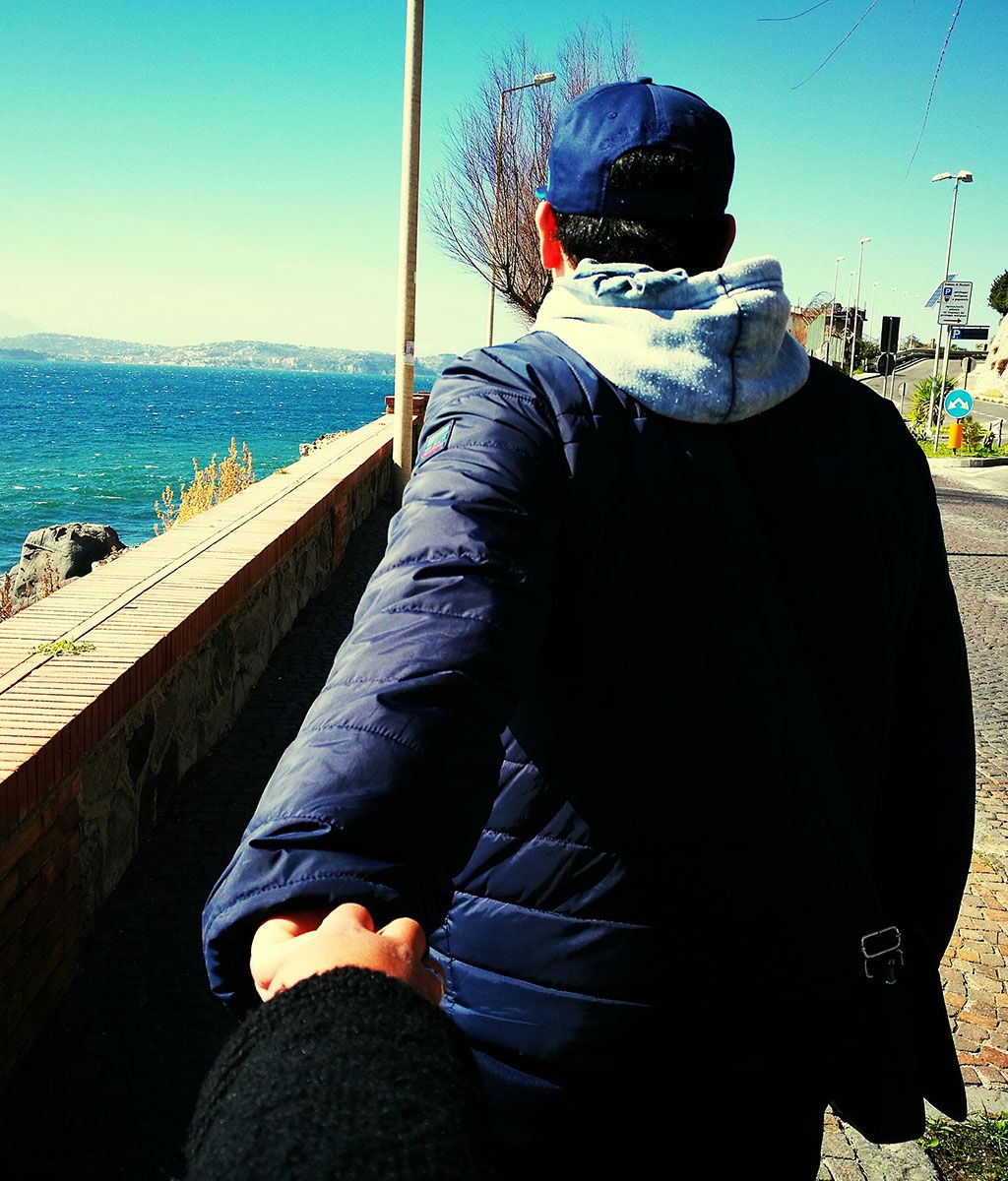 He offered to hold my jacket once, early on, as we left a small Vietnamese restaurant in Carroll Gardens. No one I dated had ever offered to carry my stuff before. I looked at him, I admired him, I said, “That is so nice of you.” He laughed and said, “Of course I would hold your jacket. Why wouldn’t I? What kind of monsters did you used to date?”

Until we met in June of 2016, I had been casually dating several men for about two years. I went on so many first dates, and even the bad ones were delightful stories. It was enjoyable to meet new people, to discover new parts of the city. I asked each man to choose his favorite first-date spot, which was such a nice way to relearn NYC. It felt freeing and wonderful to fuck without attachment after an awful breakup with a co-worker I lived with for three months in 2014. We both moved to the city the same month in early 2013 — he was a transfer from another office, I was a new hire — and started dating three months later. Navigating our new city together was good until it wasn’t.

During my last weeks with him, he threatened to shoot himself because no one respected him enough — especially you, he said coldly, sitting across from me in our sunken living room. I stayed for another two weeks until he told me I didn’t know how bad I fucked up, but I’d know it when it hit me — and motioned to the gun he kept in our closet. He threw my kitten off the couch that night because he was angry at me, and drunk. He was always drunk.

He was fired for misconduct at work four months later. During all of this I started to switch career paths, but stayed with the same company. Stayed in the same building as him. I spent nearly a month on friends’ couches, with my suitcase and my cat. I was a zombie trying different combinations of SSRIs for the first time in my life. It’s remarkable, I think, that I did not get fired for performance issues.

The man I dated after the alcoholic co-worker was a former gang member. I still refer to him as the most conventionally attractive guy I’ve ever dated in my life. He was fascinating. He knew every man on every street corner in his neighborhood. He had stories and scars — a long, white slash mark from a knife fight on his lower abdomen made my jaw drop the first time I saw him naked. It was above the “BROOKLYN” tattoo arched over his abs. After his mother got sick with cancer, he’d left his old life. He took up boxing. He traveled to Europe once, to box on a sponsor’s dime. He had a six-pack. I will never in my fat fucking life get to date a man with a six-pack ever again. His trapezoid muscles were mesmerizing. He looked like a Costco Trevor Noah. He was hot! I dated a hot man! We were not exclusive. We dated for six months, and we said we were both fine being non-exclusive, as long as we were honest. I was honest first. He became cold and distant.

His trapezoid muscles were mesmerizing. He looked like a Costco Trevor Noah.

The next time we saw each other after I was honest, he handed me a drink. I didn’t want it, because I’d already had a drink at a bar with my co-workers. I still rarely like to drink to excess — a byproduct of living with an alcoholic. I resisted, and he joked, “It’s not like I put something in it, damn girl.” I eyed him and downed the drink and sometime later, I was asleep. I woke up and he was sodomizing me. I woke up again and he was still sodomizing me. I did not panic. I did not wonder what was going on. I did not think anything. It was like I could only passively observe. I woke up again, and it was light out, and he was asleep, and I ran to the bathroom to puke. I had two drinks that night, over the course of four hours. It felt like I was draped in a blanket made of cement.

Later, when he was cooking us breakfast, I pretended to find the keychain for the first time. I asked him what the powder was, and he said we’d snorted Xanax the night before. I knew it wasn’t true. I told him I had not snorted Xanax. He said, “Are you sure? I did. I thought I offered you some?”

I brought up what happened in the middle of the night. He often woke me up with sex, except it also so often felt like he was trying to have sex with my sleeping body. (It’s easy to ignore what you do not understand.) This was different. He denied part of it. He denied the parts involved in it. I said, lightly, as if it were a joke, as if I were treading water full of sharks and laughing lightly was the only thing keeping me afloat, that it was my body. I know what’s my vagina and what’s my asshole. He shrugged it off. I did too for weeks. He was so hot. I am so homely and fat.

I ignored what happened, because there was no way it was what happened. I broke it off with him over the phone, on the corner of 21st and Broadway, a month later, for superficial reasons.

He was so hot. I am so homely and fat.

Months later, two friends came to visit. They listened to the story, which I hadn’t told before, which was full of my own interjections about missing some essential clue to prove this wasn’t true. We had been sleeping together willingly. He was hot. He had a six-pack, for Christ’s sake. He could have fucked anyone he wanted, any way he wanted. They let me finish and looked at me carefully, until one friend said, “No, it sounds like he put something in your drink.” After a pause, my friend said, “He put something in your drink, Caragh.”

I don’t know what is out there on the guilt of not caring that much about your date rape. The guilt I feel for not caring as much as I should is … immense. I cried once, months later, in a therapist’s office. I do not think I cried about it ever again. Shortly after that session I tried — and failed — to write about what happened and realized I had no idea what to call the unidentified plastic cylinder keychain outside of those very words. I punched them into a Google image search and found dozens of plastic cylinder keychains on my screen. They all seemed hollowed out. Some of them to prevent boat keys from sinking if they were dropped in the water. Some of them to hold matches. Some of them to hold pills.

I still tell people about the hottest guy I ever dated, because it’s a fun story to tell. There’s that famous Emily Dickinson poem: Tell all the truth, but tell it slant, like leave out the part where he date-raped you. He had a six-pack!

A year and a half after we left that small Vietnamese restaurant in Carroll Gardens, the man who carried my coat, who asked me what kind of monsters I used to date, he and I were discussing our reasonable timeline for getting engaged, for having children, for moving out of the city. He made me promise to take his last name, because his family would be upset if I didn’t. I finally said yes. It was the third time he pleaded with me to take his last name. I figured if it was that important to him, okay. Okay. Two weeks later he dumped me over the phone. Fourteen hours earlier I had given him $450, on top of the hundreds and hundreds I supplied him while he was unemployed for the last six months of our relationship.

There are all kinds of monsters out there. We’re supposed to be scared of the ones who want us dead, or delight in hurting us, and we are. You learn through trial and error how to avoid them, for the most part. It’s harder to contend with the ones whose main focus is to not seem like a monster. They hide their fangs and read Chimamanda Ngozi Adichie. They retract their claws and tell you they won’t fuck you the way you like to be fucked because they’re a feminist, and they make you believe that makes sense. They say you argue too much when you ask why they didn’t give you a Christmas present. Or an anniversary present. Or a Valentine’s Day present. You apologize, because you’ve been with monsters, man, so there’s no way this is a monster.

If you’ve only found yourself romantically entwined with monsters, who is really to blame?

What kind of monster am I?

See All
olympics 2021 July 23, 2021
All the Best Outfits From the Olympic Opening Ceremony From designer gowns to fanny packs.
are u coming? July 23, 2021
Raving With Hot Goths in Queens Bushwick meets Bridgerton meets Berghain meets the Baroque.
party pics July 23, 2021
The Bestest Party Looks of the Week Including an ingenious way to adapt a suit for 90-degree weather.
friday sales July 23, 2021
20 Things on Sale You’ll Actually Want to Buy: From Camper to Crate & Barrel Including a cooling linen quilt and our favorite noise-canceling headphones.
settlements July 23, 2021
Mario Batali’s Former Restaurant Group to Pay $600K Sexual-Harassment Settlement An investigation by the office of New York attorney general Letitia James found the business violated city and state human-rights laws.
arson July 23, 2021
Did Someone Set Beyoncé’s House on Fire?! A blaze at a New Orleans mansion believed to belong to her and Jay-Z is being investigated as arson.
pictograms July 23, 2021
New Sport Alert!!! The human pictograms portion of the opening ceremony is the best part of the Olympics so far.
:') July 23, 2021
Mr. Olympics Has Arrived Pita Taufatofua, Tonga’s hunky shirtless flag-bearer, is back to help open the 2020 Tokyo games.
tokyo olympics July 23, 2021
What an Eerie Opening Ceremony The Tokyo Olympics kicked off to a mostly empty stadium.
recommendations July 23, 2021
The Last Letter From Your Lover Is a Yearn Extravaganza Beware: This movie may make you want to write a letter to your ex​​
fashion July 23, 2021
Who Is Lisa, and Why Is She Saying ‘Gah’? How a store with a gibberish name became a pandemic success story.
¡hola papi! July 23, 2021
‘Am I Petty?’ We all have people we don’t like. But you’re letting your enemies live in your brain rent-free.
By J.P. Brammer
tastemakers July 22, 2021
The Designer Winning Boxing Championships Nellie Partow is dedicated to strength and empowerment.
power July 22, 2021
Washington Post Sued for Gender Discrimination Reporter Felicia Sonmez says she was banned from covering sexual misconduct after going public with her own assault allegations.
olympics July 22, 2021
A Breastfeeding Olympian Won’t Bring Her Son to Tokyo The Spanish swimmer expressed her “disappointment and disillusionment” with the Games’ COVID restrictions.
2020 olympics July 22, 2021
The Ambivalence Olympics Can you still love the Games with so many reasons to loathe them?
By Claire Lampen
the object of our affection July 22, 2021
I’m Obsessed With These Cheeky Metallic Shorts I’ve been seeing them everywhere.
By Asia Milia Ware
culture July 22, 2021
What Is This Accent Doing? Nicole Kidman does it again in the Nine Perfect Strangers trailer.
celebrity July 22, 2021
Tommy Dorfman Shares That She Is Trans “Today is about clarity: I am a trans woman. My pronouns are she/her. My name is Tommy.”
culture July 22, 2021
Anna Faris Secretly Got Married She and Michael Barrett recently eloped in Washington state.
More Stories