The Reign of King Princess

Just months into her young career, the “1950” singer is queering pop. 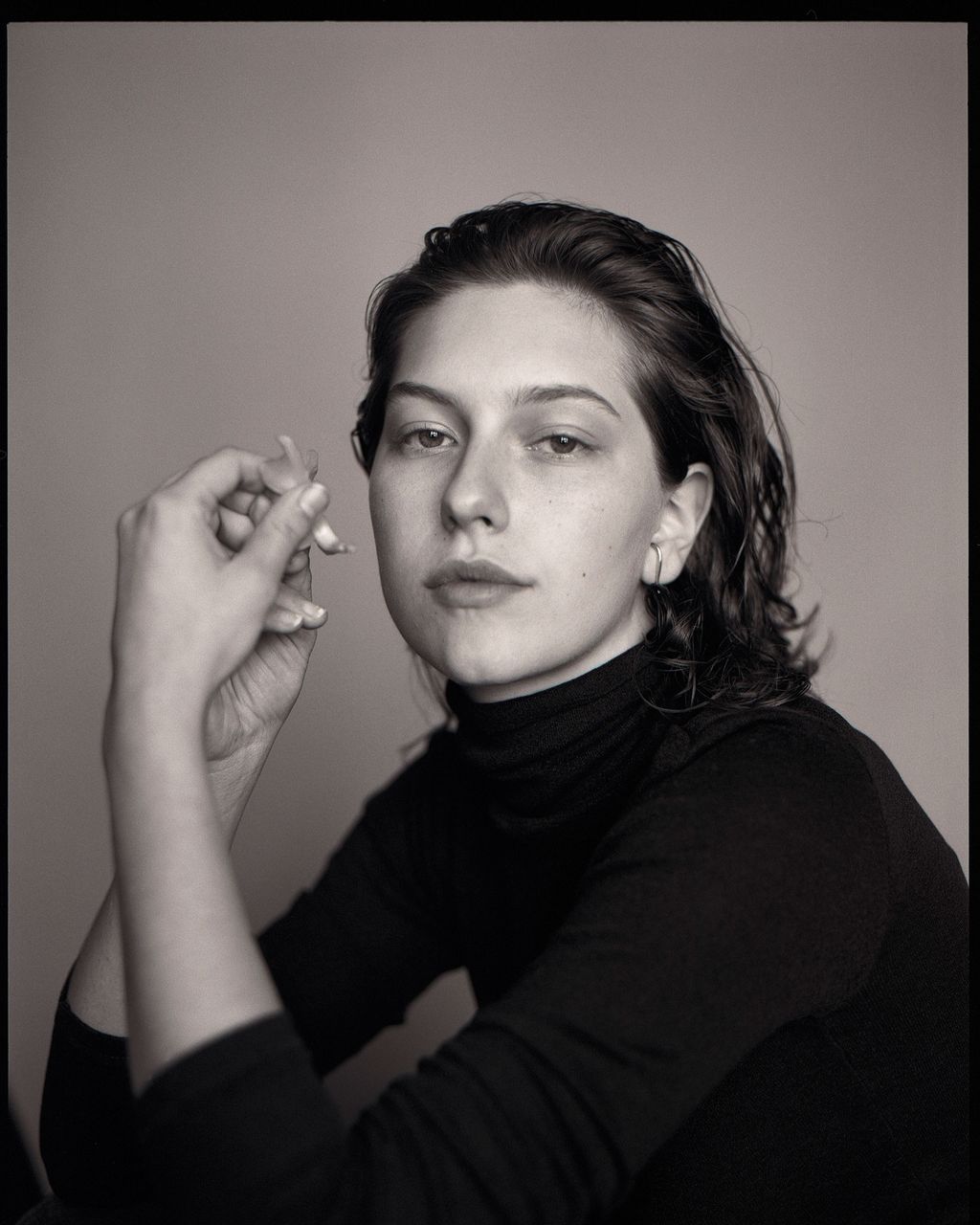 Mikaela Straus — better known as King Princess — has had a pretty dope four months. “Dope” is how she describes things that are great, and you don’t question it, because she is that self-assured. She is so self-assured, in fact, that onstage at her show in Bushwick, she wears red pants with fringe down the legs and her own merch: a T-shirt with an airbrush-style padlock labeled “KP” over the heart.

In person, Straus looks closer to her 19 years than she does online, where she seems too debonair to be a teenager. She is still growing into her stage presence, which makes sense; her first E.P., Make My Bed, came out in June, and her debut album isn’t out until later this year. She became famous mere months ago, when Harry Styles tweeted a lyric to her first single, “1950.” Straus hadn’t met Styles, and had no idea he’d heard of her — frenzied texts from friends alerted her to the tweet. Straus was flattered and says she looks up to Styles, but her confidence in her career precedes him by a long shot. She was offered her first record deal at the age of 11, and, together with her parents, decided to turn it down.

Straus’s father owns Mission Sound, a recording studio in Williamsburg where artists like Jack Antonoff, Mumford & Sons, Pink, and the National have come to make music, and where Straus first garnered industry attention for singing backup vocals for artists who came in. The studio is where Straus grew up, and it’s also where I meet her on an uncomfortably hot day in late June. After giving me a firm handshake, Straus suggests we go up to the sun-baked roof, her preferred domain, and I begin the process of sweating through everything I’m wearing. Straus does not sweat. From where I sit, she doesn’t even appear to have pores.

We are joined by Lola, Straus’s portly 8-year-old dog, whom she affectionately calls “bitch.” I tell her I have a dog named Rindy, after Carol’s daughter in the movie Carol — a transparent bid for cool points — and Straus nods. “My girlfriend and I are rereading The Price of Salt now,” she tells me.

Asked if the girlfriend in question is Amandla Stenberg (who came out as gay in an interview with Straus herself, and who features prominently in her Instagram photos and stories), Straus smirks and says “No comment.” But she’s not exactly making it difficult to figure out who she’s dating, I point out. Which she concedes: “It’s not impossible, is it? It’s pretty obvious.” Whoever she is, Straus has been with her a few months now, and they are very happy together. “I’ll just say I’m lucky,” she tells me. “I’ve got the dopest girl in my corner.”

In her career, Straus has been out from the start — “1950” is a reference to The Price of Salt, and the forbidden nature of its central lesbian relationship. The video for her second single, “Talia,” features Straus in her underwear, straddling and kissing a sex doll as a stand-in for an ex-girlfriend who’s left her. The song is devastating, with Straus’s husky vocals growing increasingly desperate and cracked as reality sets in. Someday, if there is any justice, this song will soundtrack a heartbreaking scene in a TV show about melodramatic high-school girls in love, and it will ruin your life.

Straus knew she was gay from the get-go. “I was always this kind of weird, sexual kid,” she says. “I knew what I wanted.” Though she grew up in progressive Brooklyn, and was surrounded as a kid by gay men (one of whom was her first nanny), she had a false start or two before coming out for good. “I remember vocalizing something about it and everyone was like ehhmm,” she says, making the universal sound of dismissive, mean children. “I was like, okay, I get the vibe, I’m gonna stay in the closet for ten years.” She came out for real, she says, when she was 13, which still sounds impressively young. But she was ready even younger, and having to wait it out stung. “You’re your truest self when you’re young, and when somebody says something, and you’re like, Oh, maybe I’m not normal, you shut it down,” she says. “It’s always a process to rediscover those parts of yourself.”

Today, she also identifies as genderqueer, and her style is androgynous; typically she goes without makeup, though exceptions include a drawn-on moustache in the “1950” video, the occasional lipliner-sans-lipstick look, and the copious highlighter she wears onstage. “I’m a great example of somebody who is gay, but exists on a very complicated gender spectrum,” she says. “I’m okay with that uncertainty, and I’m okay with existing in a gray area and not always being sure.”

Queer community is vitally important to Straus, both personally and musically. She cites drag and ballroom culture as her greatest performance influence, and speaks fondly of the party-kid queer family she’s assembled in Los Angeles, where she lives now. “L.A. is a little trashier” than New York, she says. By contrast, she describes the queer community in New York as “zhuzh.” This is a word I previously associated with a mom telling you to fix your hair, but which Straus uses half a dozen times to mean half a dozen different things over the course of our interview, including: exclusive/fancy, on-trend, and, broadly, “thing.” Every time, I nod like I know exactly what she means. Her vocabulary also heavily favors the word “gak,” which she describes as “a lifestyle,” and which functions as both adjective and noun: gay, amazing, fabulous, a good time.

Elsewhere, I require clarification. For example: When people her age say they’re ‘vaping,’ do they mean tobacco or weed? (It can be either, Straus tells me, and you have to use context clues to figure out which.) At her show and on her roof, Straus drags from a tiny black Juul, which she says she’s using in lieu of cigarettes while on tour — “because I have to sing.” I am not sure the science there is sound, and I want to tell her to stop both altogether, to protect her talent and her perfect skin. There is no way to do this that does not make me sound like a square, or else a 300-year-old witch who wants to steal her blood. She is 19 years old, so she will be this young forever.

In the unimaginable future,  Straus hopes she’s still doing what she’s doing now: making “sick music” and giving young queer people a safe space. Her core audience, she says, are “kids who are going to this venue to find peace.” For them, she says, her show is a ritual. “It’s a queer gathering. If I can provide that, that’s really important.” She wants to learn more about making visual art, to be more involved in making her music videos. She describes herself as a “fuckin’ crazy, OCD, wannabe crazy instrumentalist” — she plays guitar, bass, drums, and keyboard already, but she’d like to be even better. And she wants to be a voice for other young women who want to produce their own music.

“I’ve seen so many beautiful, strong, talented women stifled by male ego in rooms, and I want every young woman who feels that their music is being taken from them to know that they have a voice, and they have the tools, and that it’s possible,” she says. “This is not tough stuff. You can learn Ableton, learn ProTools, learn Logic. Oftentimes the women who sit in the room are the smartest, and they’re waiting for their turn, and they shouldn’t wait. I think I’ve set a really strong precedent in my studio, where I am obviously Big Kahuna. No one fucks with me, but people fuck with women.”

That Harry Styles tweet was only back in March, but as far as Straus is concerned, she’s no newcomer. “I popped out of nowhere, but little do they know I’ve been little fuckin’ gay-ass working in the studio since I was a kid,” she laughs. Later this month, she’ll embark on her first-ever tour, on a bus that comes equipped with an X-Box, and a rider that requests Gushers and a framed photo of Cate Blanchett. It will be, if I may, a gak and a half.

+Comments Leave a Comment
The Reign of King Princess

"wellness" 4 mins ago
The Improbable Return of the Cleanse Why food deprivation continues to thrive — and did even in quarantine.
health 7 mins ago
What We Know About Monkeypox So Far While the strain in circulation is mild, President Biden has said current outbreaks are something “everybody should be concerned about.”
celebrity 10:00 a.m.
Chris Pratt and Katherine Schwarzenegger Had Another Baby Her name is Eloise Christina Schwarzenegger Pratt.

first person 9:00 a.m.
My Life Revolves Around Breastfeeding As the formula shortage continues, keeping my daughter fed is a full-time responsibility. And I’m one of the lucky ones.
By Jen Wieczner
quitting 8:00 a.m.
Did the Great Resignation Save Your Life? To make their lives better, millions of people left their jobs last year — and no, they don’t regret it.
fashion 8:00 a.m.
Inside the Louis Vuitton and Nike ‘Air Force 1’ Exhibit by Virgil Abloh One of his last projects before his death.
lawsuits Yesterday at 6:32 p.m.
Producer Says Johnny Depp Derailed His Own Career And more testimony from the Amber Heard v. Johnny Depp case.
exes Yesterday at 5:46 p.m.
Kate Moss Will Testify Wednesday in Johnny Depp’s Trial Depp’s team is also planning on calling him back to the stand later this week as a rebuttal witness.
celebrity Yesterday at 5:23 p.m.
Florence Pugh and Will Poulter Sure Seem Friendly They were recently spotted “hanging out” on a beach in Ibiza.
father's day Yesterday at 5:13 p.m.
21 Father’s Day Gifts for the Fancy Man Fancy gifts for fancy dads.
street style Yesterday at 5:07 p.m.
People-Watching at Frieze New York See the best street style from the art fair.
By Maridelis Morales Rosado
fashion Yesterday at 3:08 p.m.
Balenciaga Took Over New York City. Here Is What Happened. For the first time in nearly 20 years, the French fashion house brought its sharp tailoring to the city.
celebrity Yesterday at 3:05 p.m.
Please Watch Kendall Jenner Try to Walk Up These Stairs The dress she wore to the Kravis wedding made it difficult to move.
i tried it Yesterday at 3:00 p.m.
Can Golden Hour Fix Your Brain? For a week, I attempted to find out.
lawsuits Yesterday at 2:03 p.m.
Bill Cosby Is Back on Trial In 2014, Judy Huth filed a civil suit against the comedian, alleging child sex abuse. Now, the case is going to court.
apologies Yesterday at 1:50 p.m.
Courtney Love Regrets Weighing in on Depp v. Heard “I want nothing to do with contributing more online bullying,” she wrote.
fashion Yesterday at 1:03 p.m.
At Balenciaga, Gloss Kapitale Demna uses money and kinky sex to sell a perfectly good suit.
By Cathy Horyn
beauty Yesterday at 12:00 p.m.
Honey Pot Meltdown Explained “It’s hard to think that we’re going to use capitalism to do radical things.”
productivity Yesterday at 12:00 p.m.
The Unreasonable Pleasure of To-Do Lists The Unreasonable Pleasure of To-Do Lists
celebrity Yesterday at 11:20 a.m.
Kourtney and Travis Had the Goth Wedding of Their Dreams The lavish Italian ceremony was apparently sponsored by Dolce & Gabbana.
More Stories