What if you had the power to make people beautiful? That was makeup artist Kevyn Aucoin’s gift. Much like Michael Phelps was built to swim, Aucoin, the subject of Tiffany Bartok’s new documentary Larger Than Life, was made to beautify. Before his passing in 2002 at the age of 40, Aucoin was not just the most famous makeup artist in the world, but the first makeup artist to ever become mainstream famous. Gwyneth Paltrow hired him to do her Oscars makeup in 1999 — the year she won in Pepto Bismol–colored taffeta. He created Whitney Houston’s look for The Bodyguard and Janet Jackson’s smoky eyes in “Scream.” He walked the red carpet with Cher and wrote a monthly column in Allure. The story of his passing became a New York Magazine cover story.

Aucoin had the “hugest hands,” Kate Moss says in the movie (“humongous,” Linda Evangelista confirms). There’s a shot of the six-foot-five Aucoin palm-to-palm with Cher, and his hands look like Bigfoot paws. Great makeup artists rely on their hands, not just mink brushes. Aucoin used his for molding foundation, melting pigment onto faces, and blending everything until you couldn’t tell the difference between skin and makeup. They were also perfect for cradling supermodels’ heads as he had his way with them, like the time he plucked off everyone’s eyebrows backstage at an Isaac Mizrahi show and started the thin-brow trend of the ’90s. (He and Mizrahi were inspired by Carole Lombard.) Cindy Crawford’s agent threatened to sue. She later forgave him once she found that her bookings actually increased. “I’m really sorry. This is everything,” Mizrahi remember her writing to him. 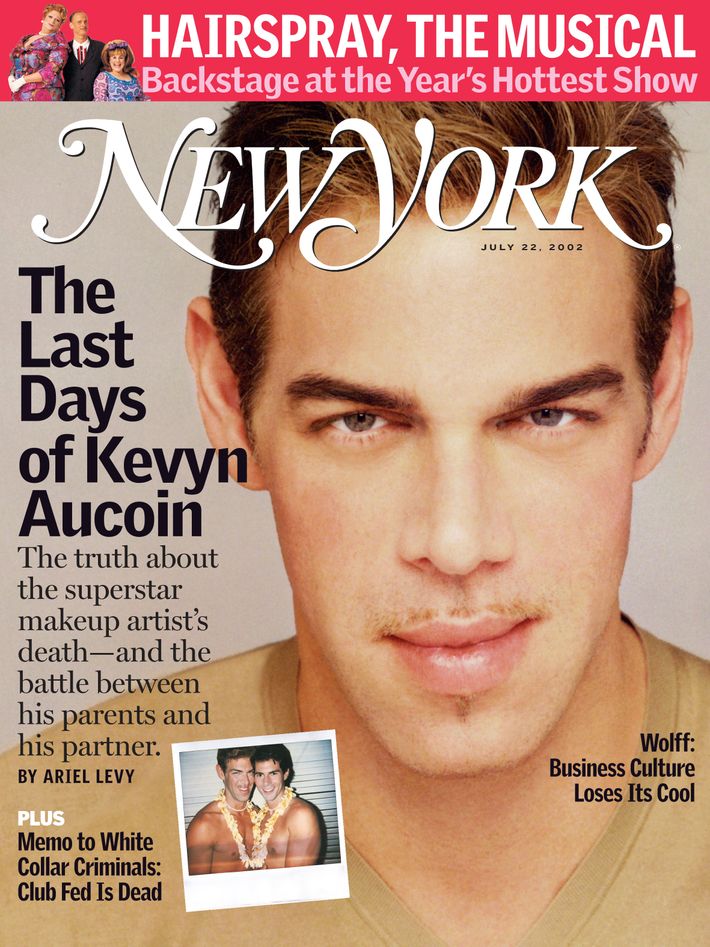 Aucoin also still impacts the way that we do makeup today. “He was the first one to put [contouring] out there for the world to see,” says Mario Dedivanovic, Kim Kardashian West’s makeup artist, in the film. Would there even be a Kim Kardashian if Aucoin hadn’t taught the world to contour? It was the “Photoshop of our day,” Evangelista said. His books, Making Faces and Face Forward, transformed Winona Ryder into Liz Taylor and his mom into Marlene Dietrich. But it was also one of the first to peel back the curtain and show and teach, with diagrams and step-by-steps, makeup’s transformative quality. The books had instructible elements, but they also showed that no one, not even Naomi Campbell, rolled out of bed looking camera-ready. Aucoin never pretended that his clients “woke up like this.”

Aucoin was often described as making “beautiful women look even more beautiful.” But he was especially drawn to shining his light on those not considered traditionally beautiful at the time. He worked with Liza Minnelli, who once told the New York Times, “It’s not that I think I’m ugly; I’m just not pretty.” Unlike today’s Instagram makeup craze, which has been accused of making everyone look like a member of the Kardashian-Jenner clan, Aucoin never flattened or stamped out individuality or uniqueness. Sure, he would contour a nose, but he wouldn’t reconstruct it or make it unrecognizable. In bringing out what he thought was most beautiful about Minnelli, he “was challenging the assumption about what a big magazine considered beautiful,” Allure founder Linda Wells explains in the movie (he ended up being Minnelli’s confidant, and even did her wedding makeup). Even though he worked on countless symmetrically blessed supermodels, he considered working with Barbra Streisand his “pinch me” moment. Growing up in ’80s Louisiana and bullied throughout childhood, he explained, “These women have given me so much when I was growing up. They had so much strength to go on. They give you struggle. They give you hope.”

Aucoin knew that the world values and demands beauty from its women. He saw the world’s most famous women bare and he understood the pressures on them. It’s no different today, with headlines wishing the 49-year-old Jennifer Lopez happy birthday alongside a photo of her abs. “He saw everything — those who were bulimic, doing Botox, and the tape and string under the pulleys to make you younger. If you needed him, you could badger him and say, ‘I need you to just come to where I am. It’s really important and I need you.’ And he didn’t want to let us down,” said Tori Amos. As an outcast in his youth, Aucoin knew that being seen as beautiful was a form of acceptance and admiration, and that he had the power to give that to people. For him, the ability to make someone feel and look beautiful feels like bestowing love in another form. And as Amber Valletta once said, “Kevyn was all love.”

astrology 8:30 p.m.
Madame Clairevoyant: Horoscopes for the Week of October 3 Mercury retrograde has finally ended. Although its effects will take time to wear off completely, we can all breathe a sigh of relief.
By Claire Comstock-Gay
sex diaries 8:00 p.m.
The Writer Staying on Her Crush’s Couch This week’s sex diary.
thanks i hate it 6:08 p.m.
Kylie Jenner’s Bleached Eyebrows Look Very Familiar Kim Kardashian’s little sister is following in her footsteps.
celebrity 4:20 p.m.
Britney Spears’s Mom Apologized to Her in an Instagram Comment “I am soooo sorry for your pain,” Lynne Spears wrote in part.
pfw spring 2023 2:02 p.m.
The Best Street Style at Paris Fashion Week See our favorite looks from outside the shows, from Crocs to head-to-toe Dior.
By Olivia Luppino
celebrity 12:48 p.m.
Trevor Noah And Dua Lipa Sure Look Cozy A source claimed the pair are “just friends” after they were spotted kissing in New York City this week.
society pages Yesterday at 2:36 p.m.
Where Art Thou, Adam Driver? Inside New York Film Festival’s Campari-drenched White Noise party.
By Sangeeta Singh-Kurtz
review Yesterday at 9:47 a.m.
At Loewe, Blurring Reality in a Digital Era Jonathan Anderson questions shape and silhouette in a modern way.
By Cathy Horyn
fashion Yesterday at 9:23 a.m.
How Bella Hadid’s Spray-on Dress Was Made We were just as confused. So we found out.
parties! Sept. 30, 2022
Microdosing Opulence at the Hermès Block Party The Parisian fashion giant celebrated the opening of its new flagship store in New York.
how does it fit? Sept. 30, 2022
We Tried Ganni’s Top-Selling Pieces on 3 Different Bodies Are we #GanniGirls?
society pages Sept. 30, 2022
Martha Stewart and a Big Fish Stopped by the Tin Building Opening Jean-Georges Vongerichten’s South Street Seaport food hall celebrated its opening with a themed culinary funhouse.
q&a Sept. 30, 2022
Hiam Abbass on Playing Ramy’s Matriarch, Maysa We spoke to the Ramy star about the show’s ambitious third season.
fashion Sept. 30, 2022
Is There Trouble Between Anna Wintour and Edward Enninful? A new report from the Daily Beast hints at unrest between the Vogue editor and her protégé.
always shopping Sept. 30, 2022
Winter Gloves to Buy Before It’s Too Late We spoke with experts to get their favorite pairs.
parties! Sept. 30, 2022
Dua Lipa, Amal Clooney, and More of the Bestest Party Pics This Week Some of our favorite looks from the New York Ballet Gala, a Chanel launch, and other glam events.
power Sept. 30, 2022
Protests In Iran Continue Over Death of Mahsa Amini Despite a brutal crackdown, women continue to take to the streets in defiance of government orders.
the most fertile man Sept. 30, 2022
Nick Cannon’s Quest to Populate the Earth Continues Cannon just welcomed his third child with Brittany Bell.
pfw spring 2023 Sept. 30, 2022
At Rick Owens, an Ancient Muse Plus more from Paris Fashion Week, including a new energy at Schiaparelli.
By Cathy Horyn
friday sales Sept. 30, 2022
20 Things on Sale You’ll Actually Want to Buy: From Disney to Neutrogena Including K-beauty must-haves and a great pair of mom jeans
More Stories