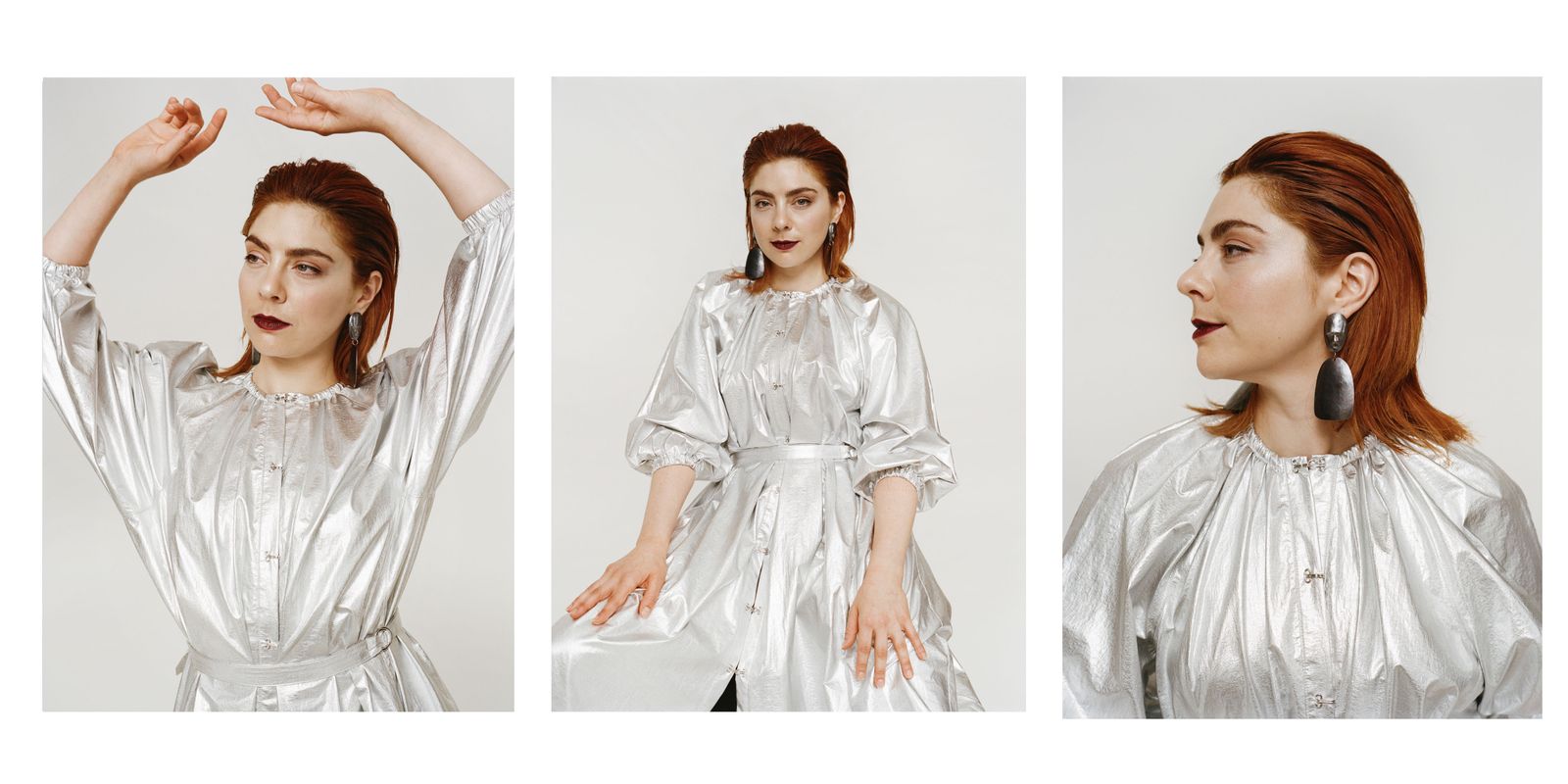 The Performance Artist Playing Her Own Muse

To be clear: Jennifer Vanilla and her creator Becca Kauffman are both pretty cool. Vanilla is an alter ego imagined by Kauffman three years ago as a performance art piece. Vanilla is bold, loves wearing her own name on her clothing, and looks like Fran Fine had a love child with Little Orphan Annie. “She’s the distillation of all of my shortcomings turned on their head,” Kauffman said. “Jennifer Vanilla is my muse and escape hatch.” We spoke with Kauffman about neo-pagan chants, Berlin, and the Carpenters.

What is your most-used emoji?
The comedy/tragedy emoji.

What is your favorite holiday?
New Year’s Eve because of new beginnings and new goals.

If you could spend three months anywhere, where would it be and why?
I’m intrigued by Berlin and the club scene there. So I might fantasize about a Jennifer Vanilla fantasy in Berlin.

What superpower would you have and why?
Morphing my physical appearance into an amorphous, environmentally absorbent substance.

What’s the best album ever made?
Chalice of My Becoming, an obscure cassette tape I found at a yard sale in Massachusetts. It features a women’s chorus singing neo-pagan chants.

Go-to karaoke song?
“We’ve Only Just Begun” by the Carpenters.

Who do you think is cool?
My friend Elsa Brown, the video poet.

What fictional character would you love to hang out with?
Jem, from Jem and the Holograms.

If you could be a magazine, what magazine would you be?
A combination of Nickelodeon magazine and As Seen on TV.

If you could speak to animals, which animals would you want to talk to?I’ve always been curious about what the cat and dog who are constantly fighting in my backyard have to say to one another.

Jeans or sweats?
Sweats, for sure.

What’s something your social-media followers don’t know about you?
That I’m actually the artist Becca Kauffman.

If you could be outfitted by one designer for the rest of your life, who would it be?
I’m contractually obligated to say Jennifer Wear by Jennifer Vanilla.

What do you eat for breakfast?
Breakfast is my favorite meal, so we’ve got oatmeal, yogurt, fruit, eggs, and smoothies.

If you could only eat three things for the rest of your life, what would they be?
Chocolate chip cookies, popcorn seasoned in any way, and coconut water.

If you were a color, what would it be?
Deep iridescent turquoise.

+Comments Leave a Comment
The Performance Artist Playing Her Own Muse
in memoriam Yesterday at 6:27 p.m.
André Leon Talley Turned His Dreams Into Fashion Fantasies From bespoke suits to caftans, his aesthetic symbolized power and grace.
book review Yesterday at 3:52 p.m.
Jamie Lynn Spears’s Book Is a Sad, Unsettling Read Despite writing extensively about Britney, she never pauses to consider what her life has actually been like.
power Yesterday at 1:20 p.m.
A Woman Says She Was Groped While Napping on a Plane She says she woke up to another passenger touching her breast mid-flight.
friday sales Yesterday at 12:32 p.m.
22 Things on Sale You’ll Actually Want to Buy: From Samsonite to Studs Including our favorite lounge shorts for men and the Shiatsu massager that’s “better than my boyfriend.”
we tried this Yesterday at 12:29 p.m.
Sorry, But I Tried the Bologna Face Mask Feast your eyes upon my meat!
self Yesterday at 12:00 p.m.
The Couples Code Is sharing phone passwords a sign of a healthy relationship? But what if you really, really don’t want to?
celebrity Yesterday at 11:59 a.m.
Have Anna Kendrick and Bill Hader Been Secretly Dating? We may have a new unexpected couple on our hands.
abortion Yesterday at 9:37 a.m.
What’s Next for the Extreme Texas Abortion Ban? The Supreme Court is now walking back on its own ruling, allowing S.B. 8 to stand and rejecting providers’ petitions.
fashion Yesterday at 8:00 a.m.
My Time With André Knowledge, coupled with his wit and amazing sense of game, should be André Leon Talley’s lasting legacy.
self Yesterday at 8:00 a.m.
Will We Ever Escape ‘Before’ and ‘After’ Photos? I’m already preparing myself for the deluge of January “weight-loss transformations” on Instagram.
By Alex McElroy
sorry to this man Jan. 20, 2022
That Time Martha Stewart Refused to Date a (Fictional) Cannibal Martha Stewart once dated Anthony Hopkins, but it didn’t last long.
fashion Jan. 20, 2022
Virgil Abloh’s Last Show Louis Vuitton memorialized the late designer for fall/winter 2022.
very online Jan. 20, 2022
Here’s What a Metaverse Rave Is Like, I Guess In fairness, I couldn’t figure out how to make my avatar dance either.
no! Jan. 20, 2022
Let the M&M’s Be Hot and Mean A rude corporate rebrand has decided the M&M’s characters should be … progressive?
celebrity Jan. 20, 2022
Tracing the Ongoing Feud Between Britney and Jamie Lynn Spears Jamie Lynn released private text messages she says she sent Britney in 2020 about the conservatorship.
enough Jan. 20, 2022
What Else Can We Put in Space? Apparently, someone is building a movie studio and sports arena out there.
power Jan. 20, 2022
Working Through the End Days of Roe The staff at the Jackson Women’s Health Organization is too busy to dread what’s very likely to come.
science Jan. 20, 2022
Give Me the Goth Space Diamond Sotheby’s is expected to sell the 555.55-carat black diamond for at least $6.8 million.
my two cents Jan. 20, 2022
‘I Was Harassed at Work. Can I Afford to Sue?’ Taking legal action might be more feasible than you think.
By Charlotte Cowles
recap Jan. 20, 2022
And Just Like That … Miranda Blows Up Her Life, Again At least Harry doesn’t have penis cancer.
More Stories