A Museum Show Where You Can Wear the Art Home

The Whitney’s Eckhaus Latta installation doubles as a clothing store. 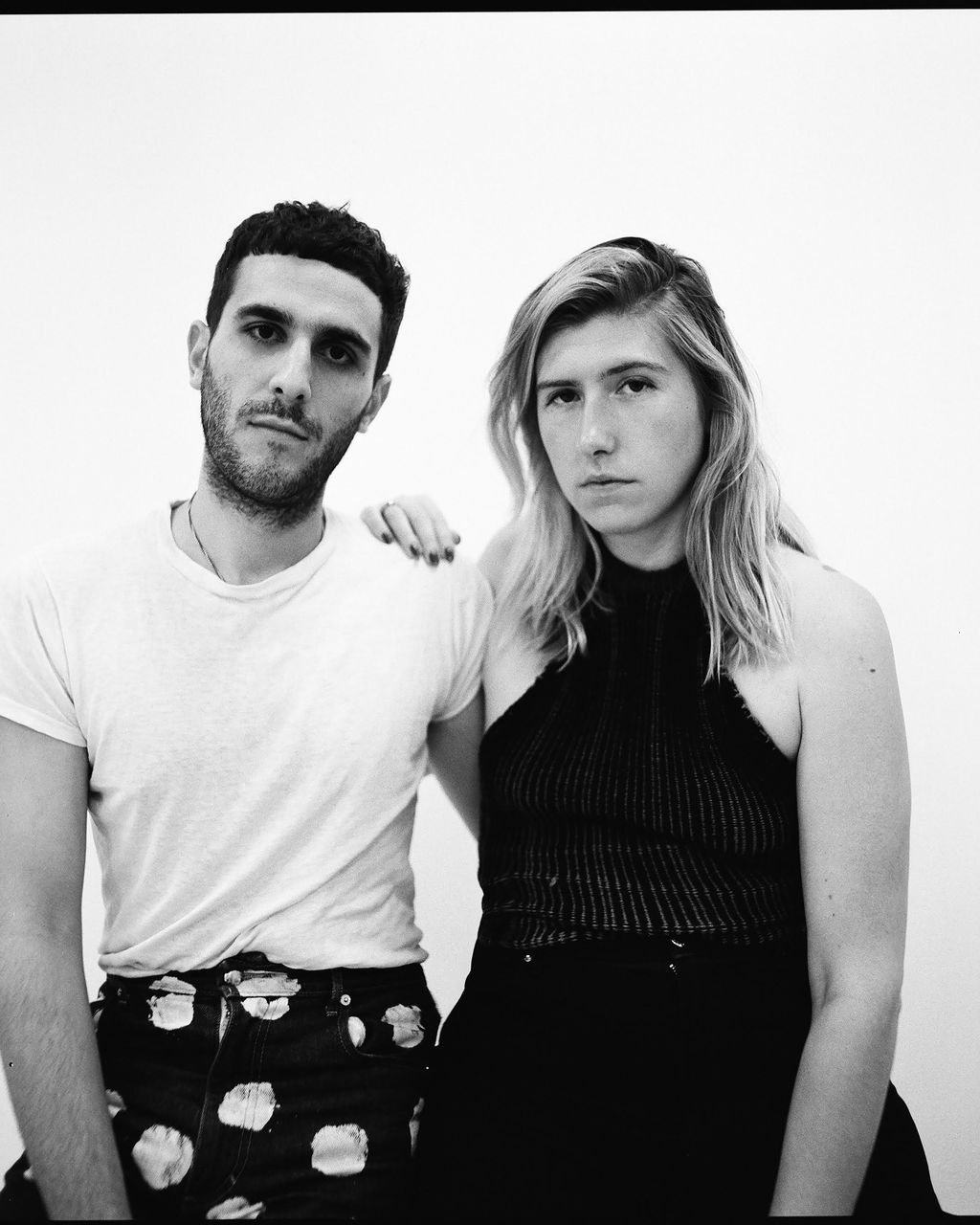 Colette, the dear departed French boutique, may have been the first store to use the term “curated” about a sneaker. Oh, the Gauls. In the late ’90s, it really did grate to hear people say “curation” in a non-art context. And then of course, like everything fashion touches — it’s such a thief! — people ran away with it, like a dog with a bone. There really isn’t any product or experience today that can’t benefit from “curation.”

Now the fashion designers Mike Eckhaus and Zoe Latta, whose label combines their last names, have put together an installation at the Whitney Museum whose centerpiece is a shop. The merch is for sale. You can touch it and try it on, which you certainly can’t do with a Jeff Koons balloon dog. No security guard is going to snap, “No photos, miss!” if you want to take a selfie in a $7,200 sweater crocheted out of plastic shopping bags (a museum with a price tag would be right up Duchamp’s alley). Eckhaus and Latta, with guidance from co-curators Christopher Y. Lew and Lauri Freedman, the Whitney’s director of product development, treat the easy arrangement between art and fashion as a contemporary artifact, an experiment. “We’re really interested in seeing what happens,” Latta says.

Will people “engage” with the clothes, to use a curatorial term, or will it be just another day at Century 21, except at the Whitney? Will visitors vaguely (or strongly) feel that their own pretentiousness is  on display if they spend more than five seconds “engaging” with a T-shirt? Will spouses and Tinder dates pat the so-called “husband couch” and wonder if it’s purchasable and, if so, can the Whitney deliver? (The furnishings are not for sale, so don’t bother anybody.) And just to extend the bug-under-glass allusion, how will people react once they discover they’re being surveilled, as in any store?

None of this is exactly new. Lew, in an interview, cited the work of Matthew Linde, of the Centre for Style, who has done presentations that combine runway, retail, and performance. There’s Prada Marfa, the installation in Texas, erected in 2005, and the projects of the Bernadette Corporation, an art and fashion collective. Lew also cited the 1971 exhibition “Fashion: An Anthology by Cecil Beaton,” at the Victoria and Albert museum, which remapped the boundaries between art and commerce when Beaton chose to include many contemporary fashion pieces and involve the imagination of window dressers.

But this is the first time the Whitney has opened a shoppable installation. “Eckhaus Latta: Possessed,” in the lobby gallery, opens tonight with a preview party (to the public on Friday) and runs through October 8. Admission to the lobby gallery is free, which probably will reduce the chance of the kind of runway-to-museum complaints leveled at the Guggenheim in 2000 for its Giorgio Armani retrospective. Then, too, “Eckhaus Latta” is not Armani — it’s not a blockbuster.

Indeed, the concept of the installation, like the designers’ work, is quite modest. Since Eckhaus and Latta, who met at the Rhode Island School of Design, started their label in 2011, critics have found the relative modesty of their clothes almost an impediment to appreciating them. Yes, they have artist friends model in their shows, and, yes, their breakthrough collection was held in the dome at PS1, in 2016, but as Latta said on that sleeting night, after models in terse, handcrafted knits and sleek satin pants with cheap-looking plush coats had walked in a spiral among the guests, it’s the “gray area” between fashion and art that most interests them.

And though they have taken conventional brand-building strides, like opening a store in Los Angeles, where Latta lives (Eckhaus is in New York), and expanding their range of styles, their unprecious-looking aesthetic has remained remarkably consistent.

“It’s that kind of consistency and precision to everything they do” that resonated with the curators, says Lew. “It’s the collection itself, but also the atmosphere they generate at the shows, and their ad campaigns, provocative or not.” He points out that Eckhaus and Latta have already exhibited their designs in an art context (at the Hammer in L.A.). “This feels like the right moment to take stock of what they’re doing in a really focused exhibition.”

The conversation with Lew and Freedman began two years ago. Initially, the designers said in an interview, they thought about doing rifts on branding and high-fashion — “like a balaclava that we soaked in lotion that was going to be a couture face mask,” said Latta, half-wincing.

“Or a bottle of bleach,” Eckhaus put in, recalling another idea.

“I think when we were going off in these directions,” Latta said, “Chris and Lauri were, like, ‘Hey, reel it in. Why wouldn’t the experience at the Whitney be like the experience in your store?’ We were very self-conscious in the beginning about this context. We’re used to doing things that last 15 minutes, and this one lasts two-and-a-half months.”

The installation has three parts. Upon entry visitors will see a series of larger-than-life portraits of the model Gemma Ward photographed in the style of Avedon or Meisel — that is, a glossy mag. “It was important to work with a model like Gemma Ward,” Eckhaus said. “You immediately see this person who signifies fashion.” Latta added, “Though it’s not our intention that you know Gemma Ward’s name. Her face has sold you things before.”

The second part is the main exhibition space, designed to incorporate the vibe of a backstage (raw Sheetrock) with trappings of a low-key boutique. All the furnishings — mirrors, dress rails, and so on — have been made in collaboration with about a dozen artists, including Susan Cianciolo, Jeff Joyal, and Latta’s father, Jay, a jeweler in Santa Cruz.

A “surveillance room” is the last part. To fill a wall of monitors, they asked retail clients around the world to give them security-camera footage.

“I was surprised how willing people were,” Latta said. “We gave them the option to blur out faces. Still, I was surprised that people said, ‘No, it’s fine.’” One store in Japan was so obliging that its staff set up a cell phone to record customers, since it didn’t have security cameras.

All of the clothing has been made for the installation. There’s a broad mixture of one-off pieces, like some extraordinary beaded knits, and limited runs, like hand-painted trouser suits, as well as more generously stocked items, like repurposed T-shirts that were screen-printed in L.A. and three or four different jeans styles. As a rule, for their runway shows, the designers don’t do so-called “special” pieces — show-closers destined for red carpets and, well, collectors and museums. So more time and craft went into the Whitney one-off pieces, like the plastic-bag sweater.

Which raised the thorny question, at least to Latta and Eckhaus, of how to determine prices for things that suddenly had more perceived status. They didn’t want to set prices high just because it was the Whitney.

“That question is really what got us to the Whitney,” said Latta. “What is the difference between a retail space and art institution? At what point is it opaque or transparent whether something is purchasable? Or a commodity, or functional? In that moment, what is its function? Can you try it on? Can you buy it? Do you like it?” Those questions impacted pricing, especially on things that required more time and also would never be reproduced.

“We’re hoping that everything sells out,” Latta said, adding with a smile. “We would like it to visibly diminish over time.”

That would be kind of cool, in a Day of the Locust sense, unless of course you don’t plan to be in New York until the end of September. (Lew says the museum will restock. “We’re going to make sure there are things left.”)

But nobody knows how the “shop” at the Whitney will work out.

Latta said, “They throw around some visitor numbers that honestly I think Mike and I chose to forget, because they’re very intimidating. Our store in L.A. — it’s a great day if ten people come in.”

+Comments Leave a Comment
A Museum Show Where You Can Wear the Art Home
holiday gifts 2022 5:23 p.m.
The Best Secret Santa Gifts Under $25 (That You Can Buy on Amazon) From a stainless-steel pierogi press to a banana-shaped cat toy.
By Dominique Pariso
fashion 5:17 p.m.
What to Know About the Balenciaga Ad Scandal The fashion house is under fire for two separate campaigns that consumers say promote child exploitation.
keeping up with the royals 3:52 p.m.
Will and Kate’s Big Night Out (in Boston) The Prince and Princess of Wales touch down in Beantown on Wednesday.
yikes 3:31 p.m.
Rebel Wilson, We’re Confused Her new loungewear collection isn’t size-inclusive … at all.
crime 2:24 p.m.
An Ex-Cop Allegedly Catfished a Teen and Killed Her Family The former Virginia trooper was killed in a shoot-out with authorities last week.
holiday gifts 1:13 p.m.
17 Best Luxury Candles That Double As Great Holiday Gifts Including an affordable option.
celebrity 12:26 p.m.
Billie Eilish Is Amped to Be Dating Jesse Rutherford “Round of applause for me.”
do i need this? 12:10 p.m.
The Dapper Dan x GAP Hoodie Collab Is Back In four new plaid colorways for the holidays.
divorce 10:58 a.m.
Kim and Ye Are Officially Divorced Ye will reportedly pay Kim $200,000 in child support every month.
ask a beauty editor 8:00 a.m.
‘Is Dermarolling at Home a Good Idea?’ The issues with DIY microneedling aren’t as obvious as you might think.
parenting 8:00 a.m.
What Is It This Time? When my younger child recently woke up barfing, I tried to figure out if she had RSV, flu, COVID, hand, foot, and mouth disease, or yet another thing.
By Lydia Kiesling
why is your skin so good Yesterday at 5:08 p.m.
How Kelly Rowland Gets Her Skin So Good Her “obsessive” routine involves regular cryotherapy facials, lots of face tools, and multiple cleansers.
celebrity Yesterday at 3:01 p.m.
Meghan Markle Won’t Be Joining The Real Housewives Anytime Soon Fans will have to settle for watching her life on Netflix.
strength Yesterday at 2:56 p.m.
Country Singer’s Kids Are Naturally Ripped, You Freaks Jessie James Decker did not Photoshop abs onto her young children, okay?
is this flirting? Yesterday at 2:55 p.m.
So This Is How Ben Affleck Signs His Flirty Emails Is it a promise, or is it a threat?
gone sale-ing Yesterday at 2:40 p.m.
These 16 Cyber Monday Beauty Deals Are Still Going Strong Tatcha, Sephora, and Nordstrom are still offering some great discounts.
black friday Yesterday at 1:10 p.m.
17 Cyber Monday Fashion Deals You Can Still Shop From Everlane, Nordstrom, Saks, and more.
celebrity Yesterday at 12:52 p.m.
Hailey Bieber Shares Her Experience With Ovarian Cysts She revealed she’s suffering from a cyst “the size of an apple.”
crime Yesterday at 12:27 p.m.
What We Know About the Death of Shanquella Robinson A 25-year-old American woman was found dead while on vacation in Mexico. Authorities have issued an arrest warrant for one of her friends.
ask a boss Yesterday at 12:00 p.m.
‘Should I Give My Boss a Holiday Gift?’ All your questions about holiday gift-giving at work, answered.
More Stories