Increasingly, eco-friendly living is becoming less of a lofty ideal and more of a reality that affects us all: from plastic straws falling out of fashion to a boom in footprint-conscious fashion made for the mainstream. Yet, in the home, eco-design can still carry a stigma of being costly, complicated to implement, laborious to maintain, and, frankly, unstylish. To prove that this thinking is outdated, Design Hunting editor Wendy Goodman recruited interior designer Delia Brennan to deliver the second challenge in our Design Beyond Fellowship: to create a luxurious and inviting bathroom that “uses less.” In other words, one that prioritizes natural materials, conservation, and earth-friendly functionality.

As a starting point, the fellows based their beyond-average bathrooms around a Delta Faucet shower head that provides increased warmth and coverage for the user, while using at least 20 percent less water than the industry standard: the H₂Okinetic® Pendant Raincan Shower Head. For further inspiration, Brennan led the fellowship’s young designers — Spencer Sight, Selin Kurun, Nick Ozemba, and Ajaee Shepard — around the Brooklyn Botanic Garden, where the flora in the Tropical Room, Aquatic Room, and other environments sparked ideas for their future-facing designs. Below, see the creative — and sophisticated — solutions the fellows imagined. 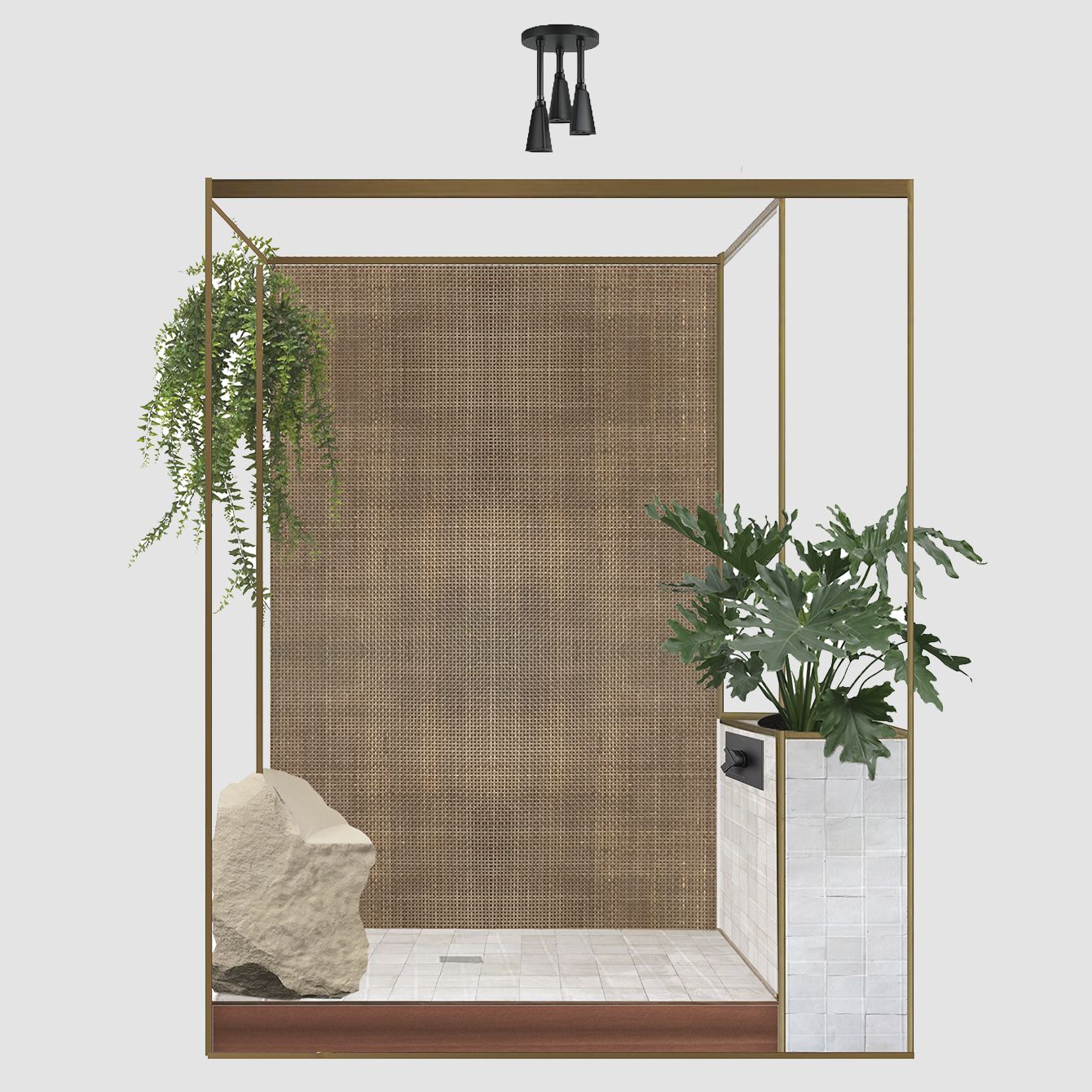 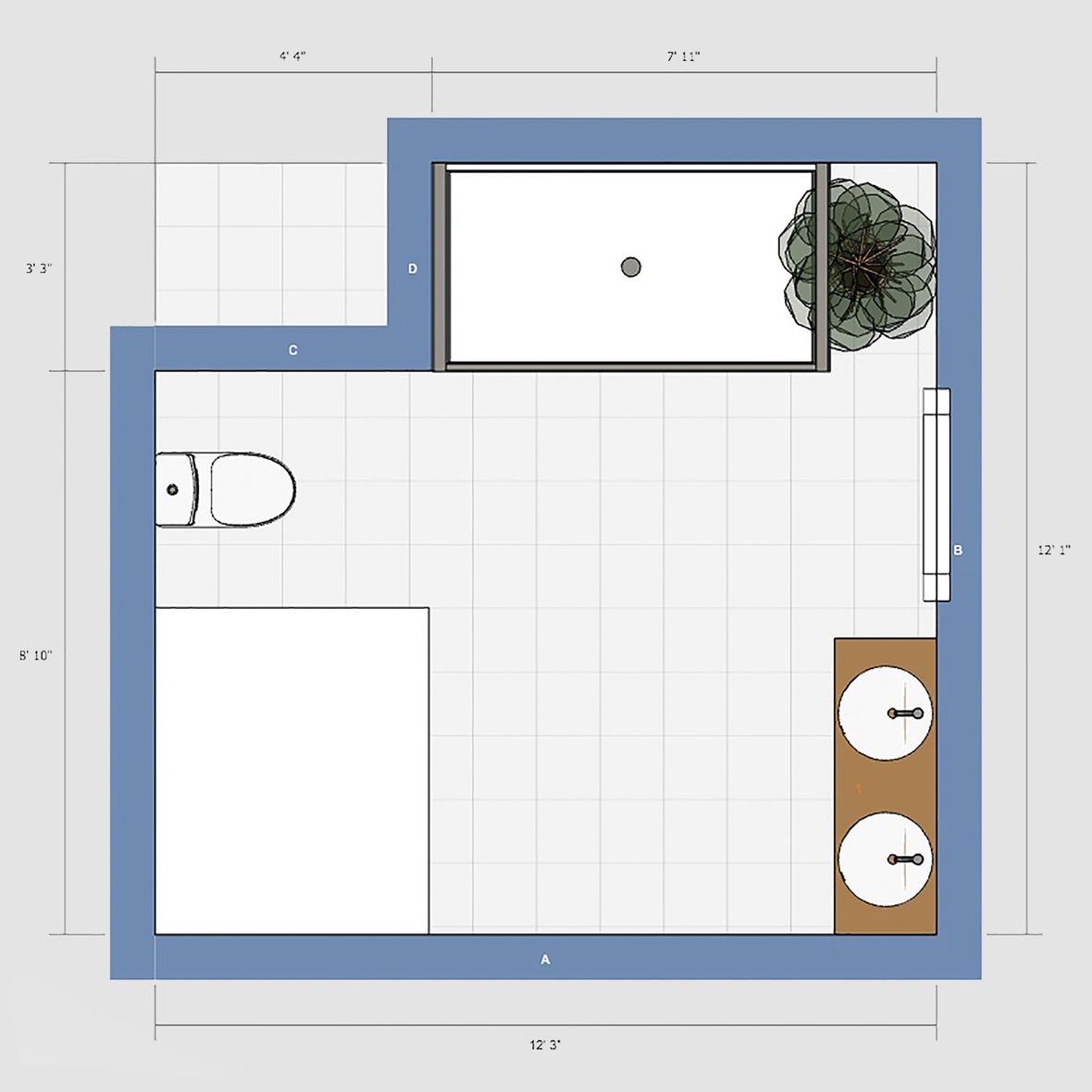 “Design has the ability to facilitate the way people connect with the physical realm, which can improve not only the look, but also the function of a space — as demonstrated by the shower head we were working with. A lot of bathrooms are disconnected from the elements, so I created a bathroom that acts as a threshold between the built environment and the natural world, a space that can used to nourish one’s body, and renew the spirit.

I connected the bathroom to a gray water system, enabling the runoff from the faucets and washing machine to be reused in the toilet or as irrigation for plants in the courtyard. For the materials I chose, I included the elements of water, fire, earth, metal, and wood, each in a visible, tangible way. For me, this was an an opportunity to bring life into an inanimate space, and evoke a sense of well-being for the user. It’s my goal and responsibility to design with both the human and the planet in mind. What is positive for the planet is ultimately positive for us.” 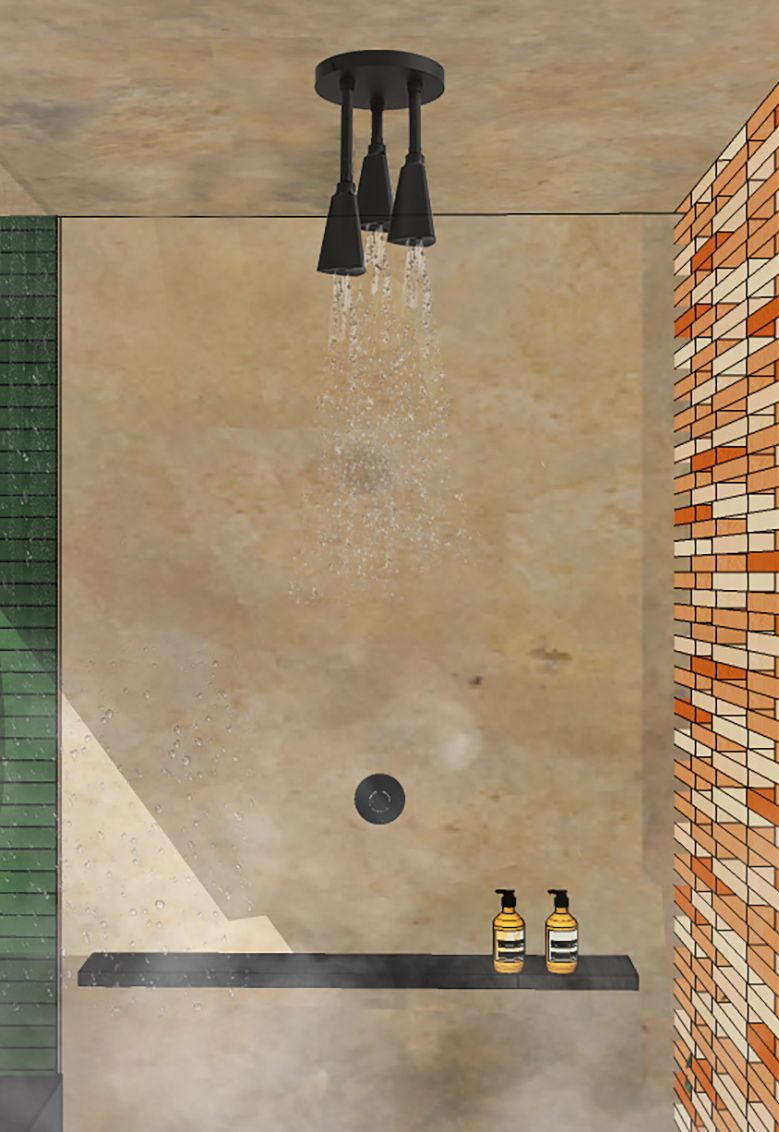 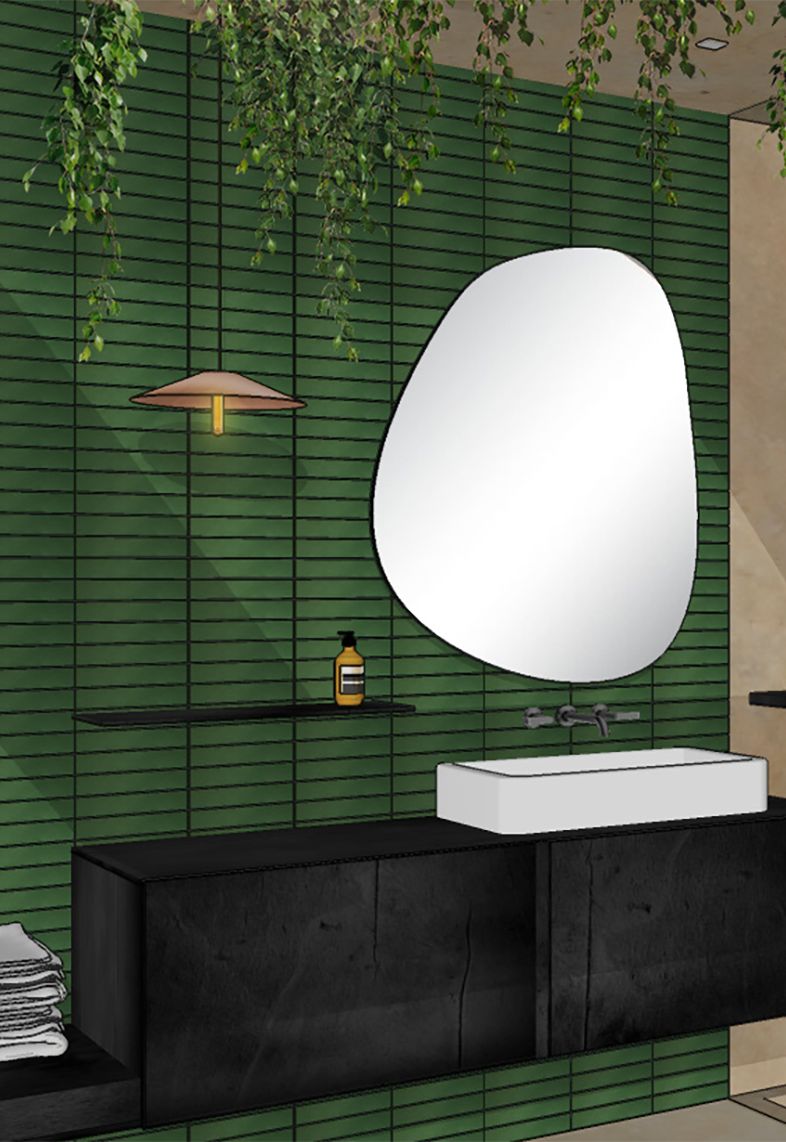 “Designing with the natural environment in mind, my concept is an outdoor, rainforest-like experience. My intention was to create a beautiful, eco-minded bathroom that integrates consciously selected materials and products, and resources that are environmentally friendly.

Green vegetation hangs from the skylight, as the sunlight beams through the lush leaves. The neutral palette of muted earth tones ties us back to the earth. Textured surfaces like ebonized wood and the repetition of multi-toned terracotta bricks bring movement to the space. Deep green clay tiles climb the feature wall from floor to ceiling, creating a backdrop for the organic shaped mirror. A thin layer of glass separates the handwashing sink from the shower area. Behind the glass partition, the bold and beautifully designed shower head hangs from the ceiling. Its matte black finish creates a heavy contrast with the multi-toned terracotta brick partition in the background.” 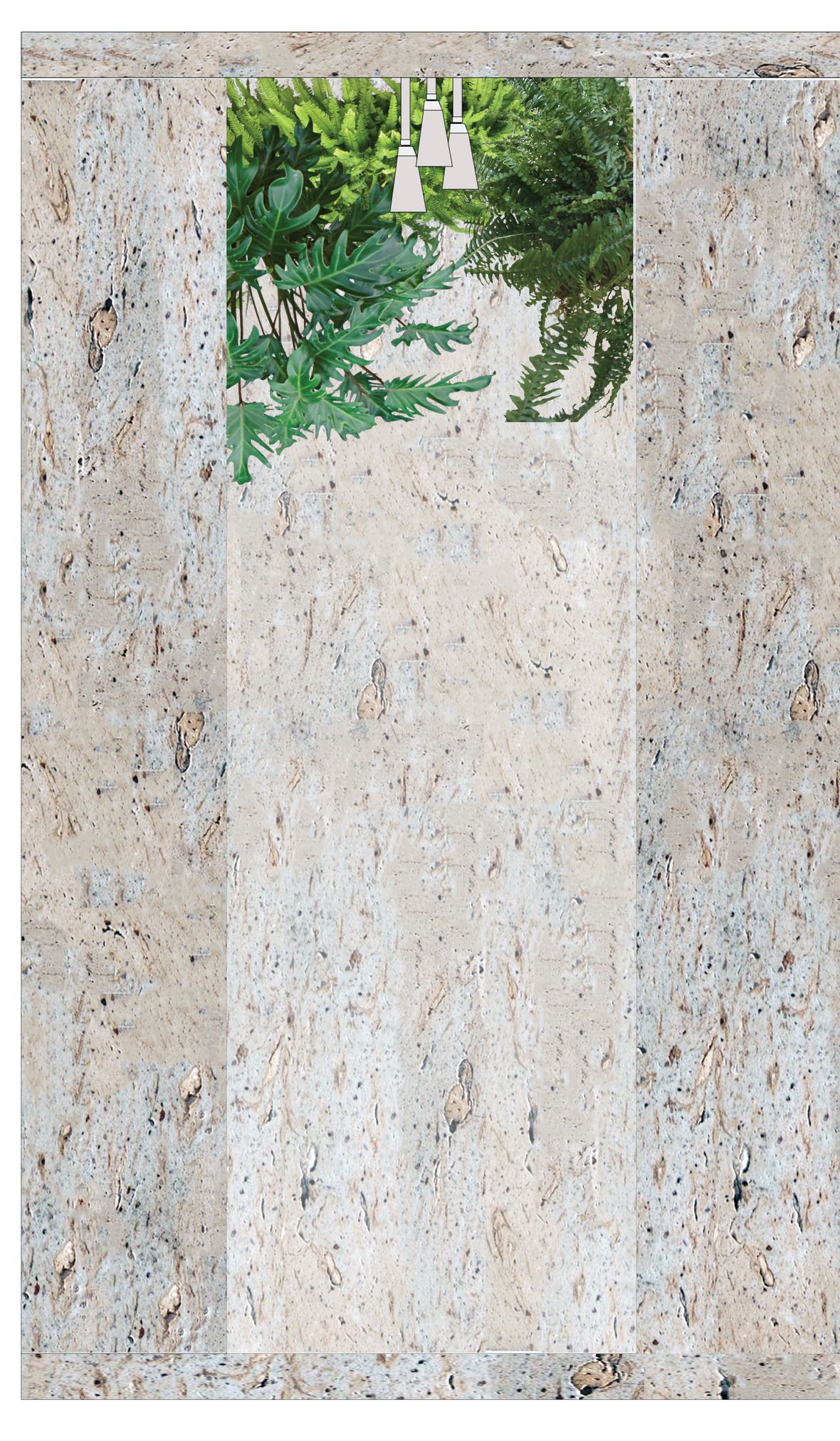 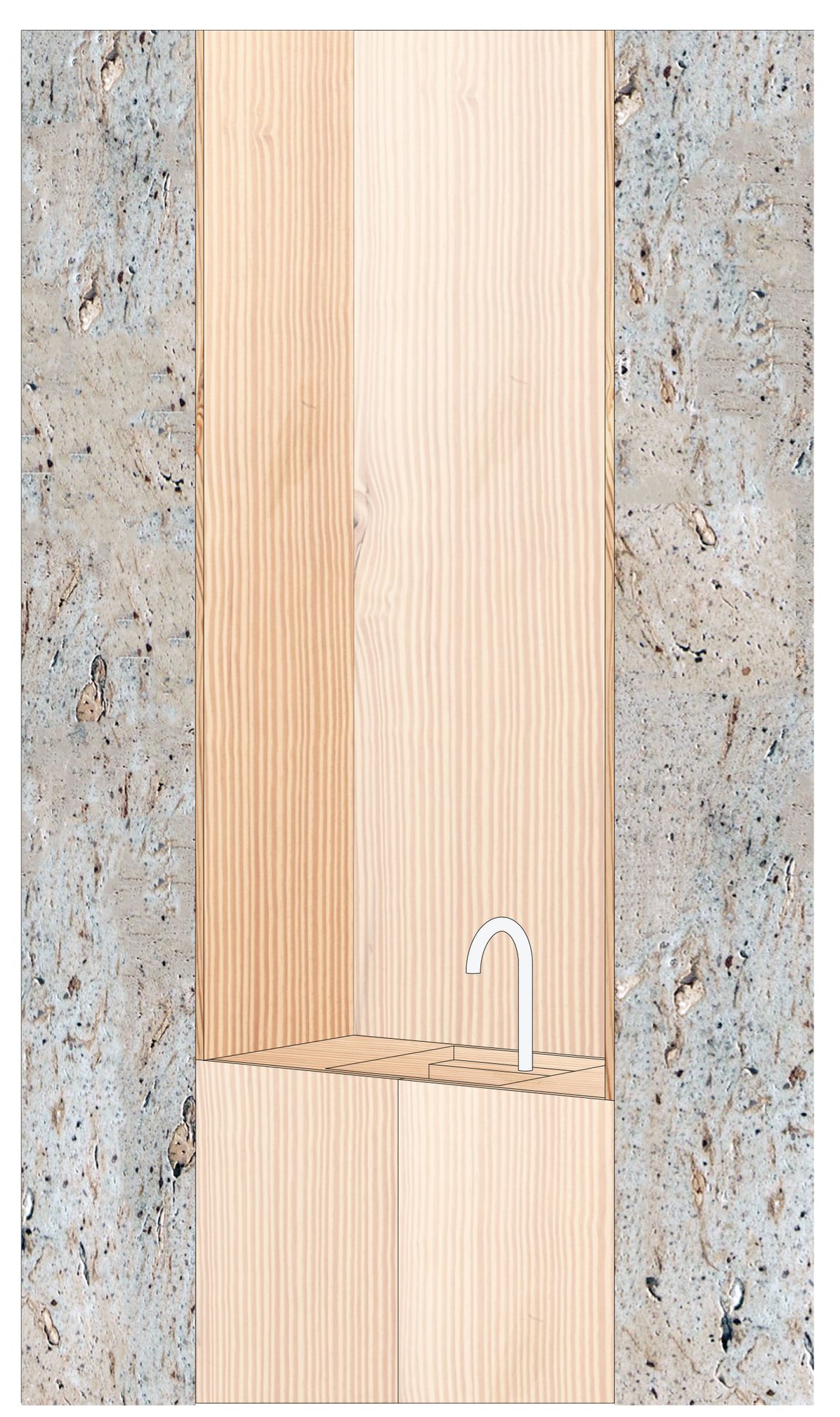 “My concept for this challenge is a hanging-plant shower garden inspired by the Aquatic House at the Brooklyn Botanic Garden, and featuring the Delta Faucet H₂Okinetic Pendant Raincan Shower Head as a primary focus. The bathroom is programmed with two rooms: a bathing room and a washroom, creating a distinct separation between these two everyday rituals. The walls and floors are coated in up-cycled tile and slabs made from waste material and reclaimed wood millwork.” 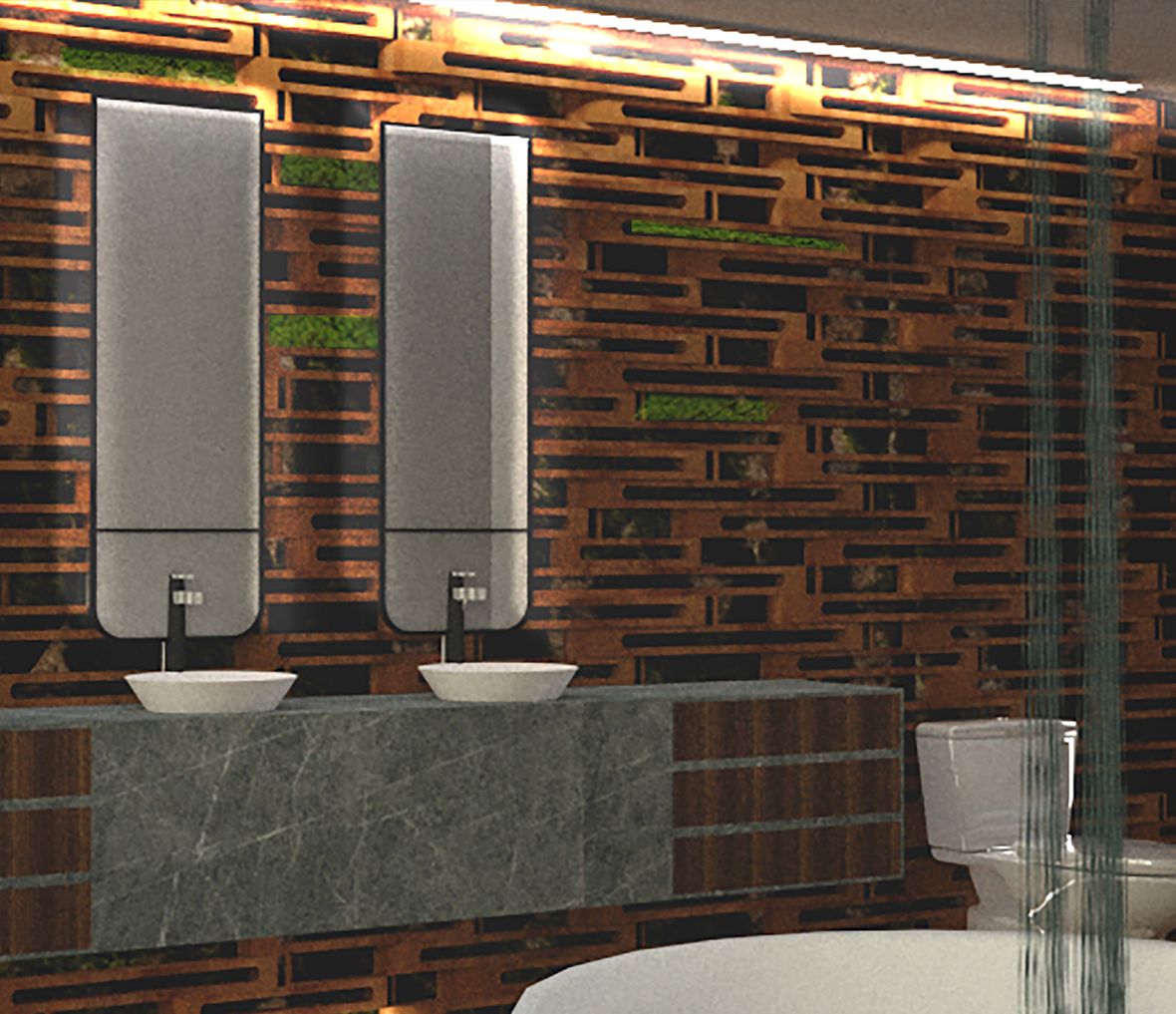 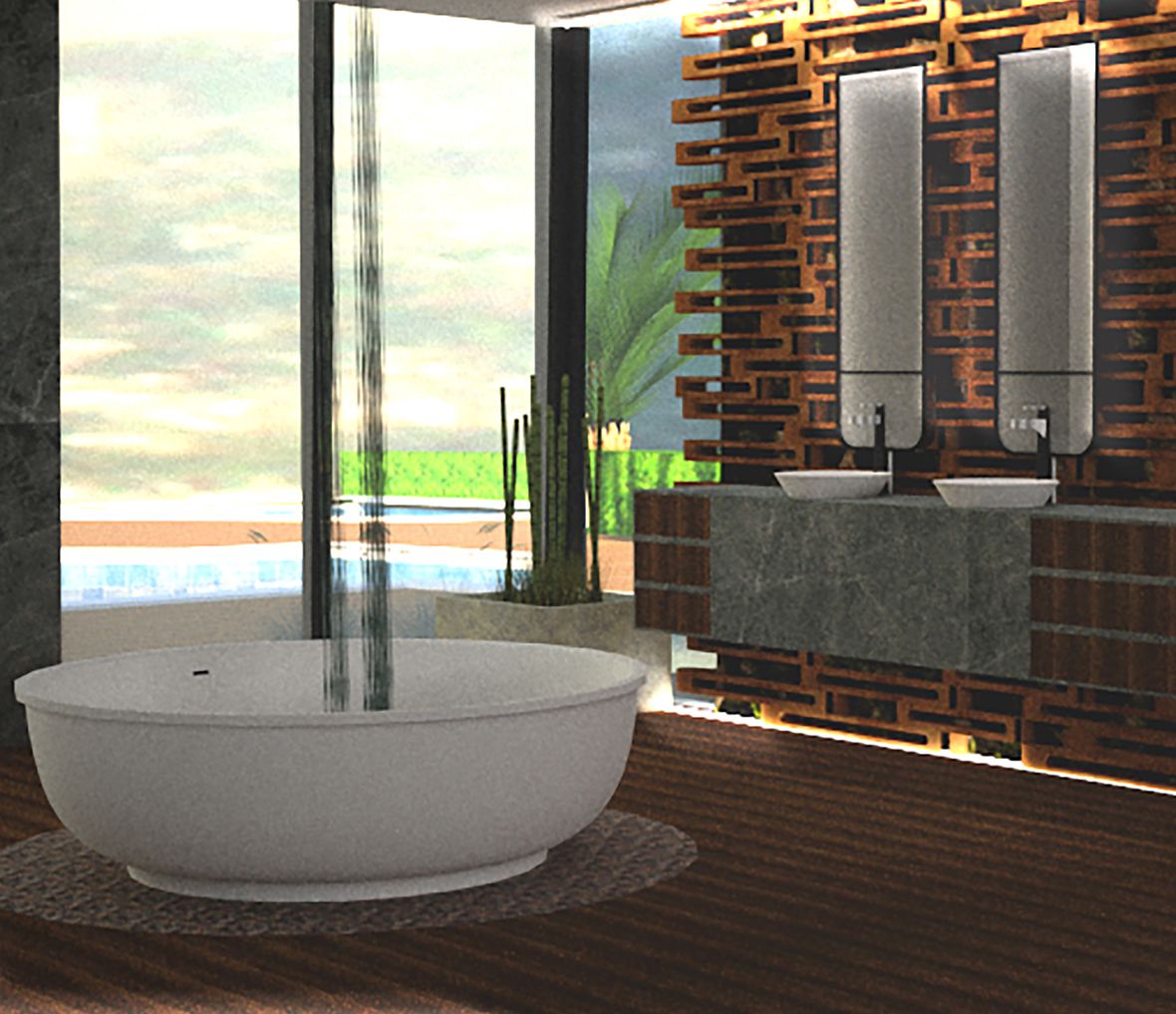 “My open concept is not only exposed to the elements, but also utilizes them. The space has a calm and warm feeling, featuring natural materials such as stone, bamboo, cork, and plants. I also incorporated the four elements — earth, water, fire, and air — throughout. The fireplace enclosed by gray, white-veined stone creates a sophisticated yet simple look. Bamboo flooring creates a texture shift, along with the stones surrounding the tub, which also appear on the vanity counter. For organic-feeling ambience, I placed a live wall with moss and other greenery behind the vanity, shielded by a highly sustainable cork overlay for additional texture.

Because the shower head reminded me of a lighting fixture, I highlighted it in the center of the bathroom. The shower head fulfills the space’s water element, and I surrounded it with cove lighting for a dramatic effect. With sustainability in mind, the bath utilizes a rainwater tank system, which is also accessible through the exterior on the back wall. The glass floor-to-ceiling windows and doors allow for a flow of air and earth elements.”

+Comments Leave a Comment
What If Every Bathroom Could Be Eco-Friendly?
books Yesterday at 9:21 p.m.
A Tennessee School Board Just Voted to Ban Maus The school board cited nudity and inappropriate language in its decision.
makeup Yesterday at 7:00 p.m.
Glossier Announces ‘Difficult but Necessary’ Layoffs The company reportedly laid off one third of its corporate employees.
sundance 2022 Yesterday at 5:32 p.m.
The Heartbreak of Leaving Behind a Best Friend Am I OK? is for our platonic long-distance loves.
celebrity couples Yesterday at 5:32 p.m.
Brenda Song and Macaulay Culkin Are Engaged Congrats to Hollywood’s most low-key couple.
power Yesterday at 4:45 p.m.
What to Know About Judge Ketanji Brown Jackson She reportedly ranks high on President Biden’s shortlist to replace Justice Stephen Breyer.
kimye Yesterday at 4:24 p.m.
Why Are We Suddenly Talking About Ray J’s Laptop? Kim Kardashian has denied Ye’s suggestion that there was a second sex tape.
power Yesterday at 3:22 p.m.
What We Know About the Death of Lauren Smith-Fields The family of a 23-year-old Black woman plans to sue the city of Bridgeport for failing to properly investigate her death.
and just like that Yesterday at 2:47 p.m.
The Triumphant Rise of … Charlotte? If And Just Like That … succeeds at nothing else, it makes good use of the franchise’s most underestimated character.
sober questioning Yesterday at 12:00 p.m.
Ask Ana Marie Cox (Almost) Every Question You’ve Ever Had About Sobriety The Cut’s new biweekly column is talking drinking, not drinking, and everything in between.
no please Yesterday at 11:30 a.m.
I Refuse to Know Any More About This Monkey The celebs are trying to make me care about their latest NFT trend. I won’t let them.
spider-couple Yesterday at 9:45 a.m.
A Brief History of Zendaya and Tom Holland Flirting Publicly They’ve reached the “walking with coffee mugs” stage.
hmm Yesterday at 9:39 a.m.
Marc Jacobs Shoppers Scored Free Bags. So They Thought. A website glitch made bags 100 percent off.
now smell this Yesterday at 8:00 a.m.
Thierry Mugler Changed the Perfume World Forever With his perfume Angel.
By Kathleen Hou
power Jan. 25, 2022
The Lives They Want You to Forget Anti-choice activists try to erase the patients who need — and benefit from — abortions.
anti-vaxx Jan. 25, 2022
Cheryl Hines Condemns Husband RFK Jr.’s Comments About the Holocaust Robert F. Kennedy Jr. brought up Anne Frank during a recent anti-vaxx rally.
couture fashion week Jan. 25, 2022
At Couture, Embracing Hard Chic What Daniel Roseberry’s Schiaparelli collection, Maria Grazia Chiuri’s Dior, and Virginie Viard’s Chanel had in common was precision.
By Cathy Horyn
racism Jan. 25, 2022
Bravo Fires Jennie Nguyen from The Real Housewives of Salt Lake City “We recognize we failed to take appropriate action once her offensive social media posts were brought to our attention.”
recap Jan. 25, 2022
A Bachelor Villain and Her Garlic-Butter Shrimp Shanae takes food fights to the next level.
celebrity Jan. 25, 2022
Pop Quiz: Do You Know Who This Man Is? Wheel of Fortune host Pat Sajak recently confessed that he had no idea.
ask a boss Jan. 25, 2022
‘I Hate My New Job. Can I Quit Yet?’ Before you make any moves, have a straightforward conversation with your boss.