Fashion is frequently described as “wearable art.” But with interior design, art is often incorporated in a more literal sense — decorative work, purely for visual observation. True, art can have a more complex purpose than to break up a blank wall, but the question remains: Can fine art serve any practical function? To explore the connection between art and design, New York design editor Wendy Goodman asked interior designer Young Huh to create a challenge for our Design Beyond™ Fellowship. Huh tasked fellows Selin Kurun, Nick Ozemba, Ajaee Shepard, and Spencer Sight with choosing a type, style, or genre of art, and parlaying it into a future-facing kitchen design.

Huh encouraged the four emerging designers to consider how abstract concepts found in art can inspire concrete, usable spaces and products. Case in point: The Delta Pivotal™ Kitchen Faucet With Exposed Hose — which each fellow incorporated into their concept kitchen — features an angular, geometric design with lines borrowed from art and architecture. Yet it’s also engineered for everyday use, with a magnetic system that secures the spray head in place and an LED light that indicates water temperature. Watch the challenge play out in the video above, including a trip to the AKDO New York Showroom, where Huh’s Islamic-art-inspired tile collection is showcased. Then learn more about the final designs below. 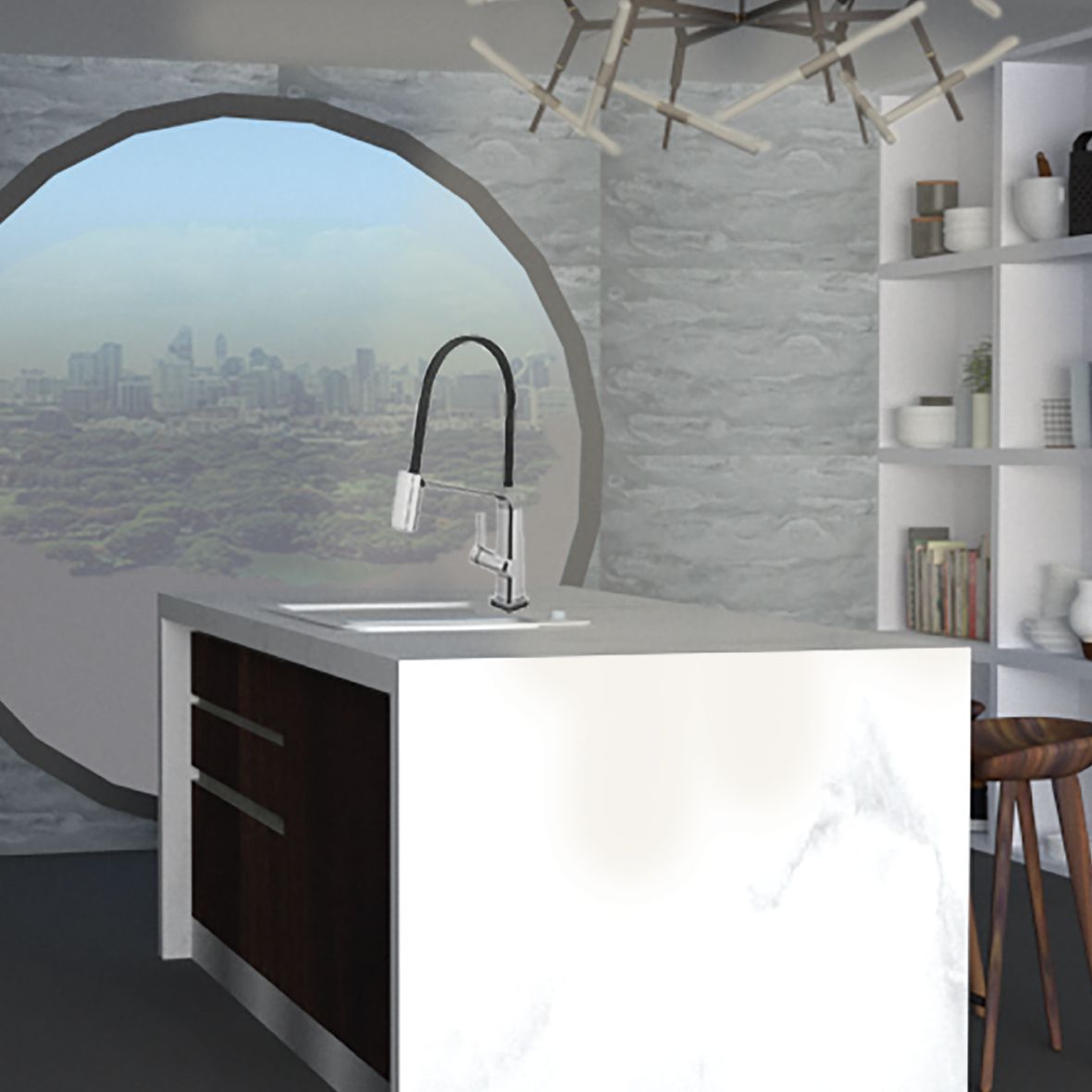 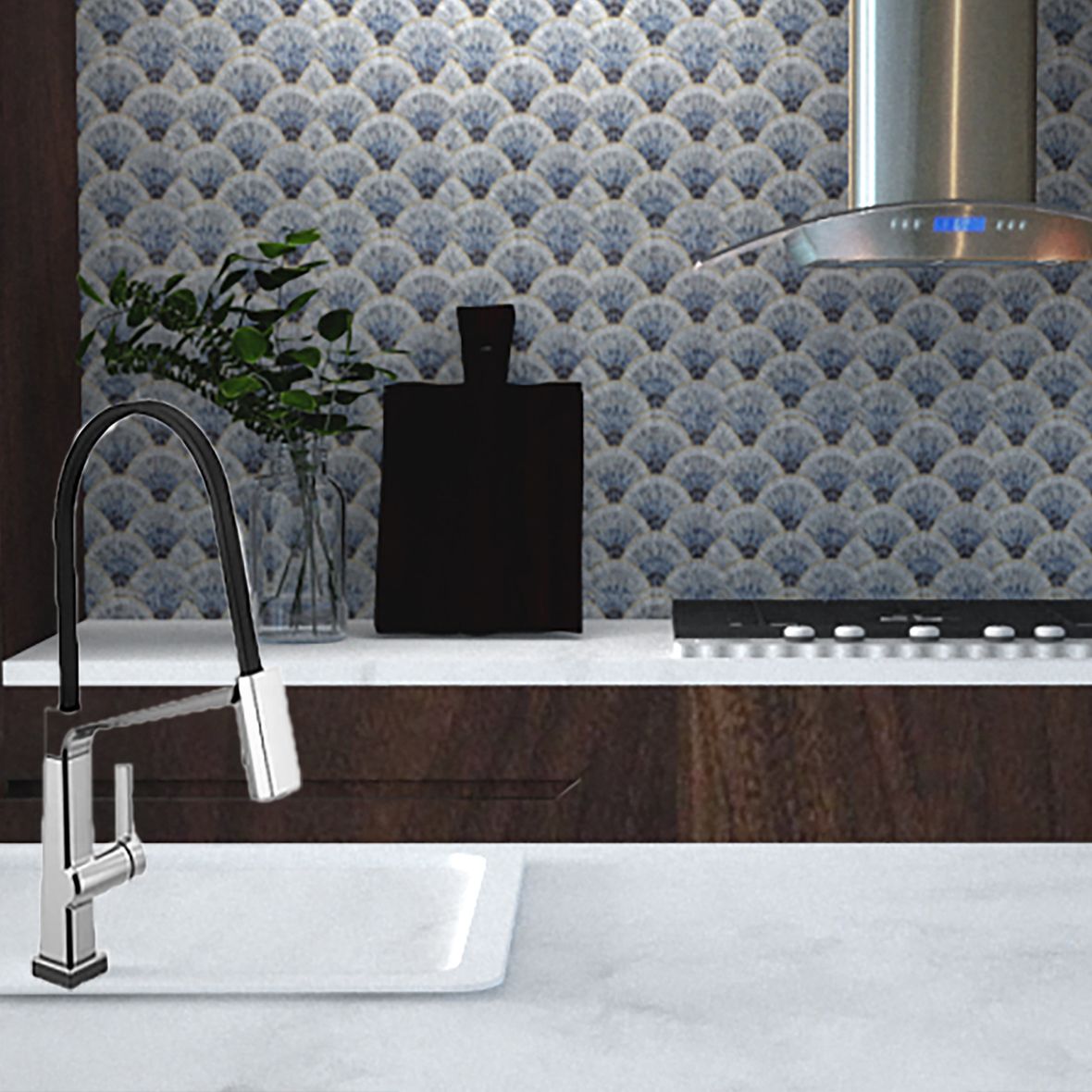 “Interior design, to me, is poetry made physical, with every selection accumulating to convey a larger story. For this challenge, I was inspired by the Harlem Renaissance, an era of overcoming adversity, the beginning of a brighter future, and the shaping of an identity for African Americans in New York City. From the poets and jazz artists to the nightclubs and lively fashion, I wanted to subtly call back to that explosion of culture in my design. Kitchens in the black community go beyond just functionality — they are a space for tradition and the shaping of families, and foster the true essence of black culture.

I started with an oversized window with a circular frame that doubles as an LED touch screen that can adjust light, access virtual cookbooks, and display the user’s digital art collection. The window welcomes ample natural light, and reminds the user that their world is limitless. Overall, I took a minimal approach, playing off of the faucet’s dynamic angles and architectural styling. Then, I incorporated materials that echo the free movement of jazz, such as glass lunar slabs that can be interpreted as a moving body of water, phases of the moon, or even smoke. Finally, the backsplash’s ombré, mosaic-fan pattern represents the lavishness of the Roaring Twenties.” 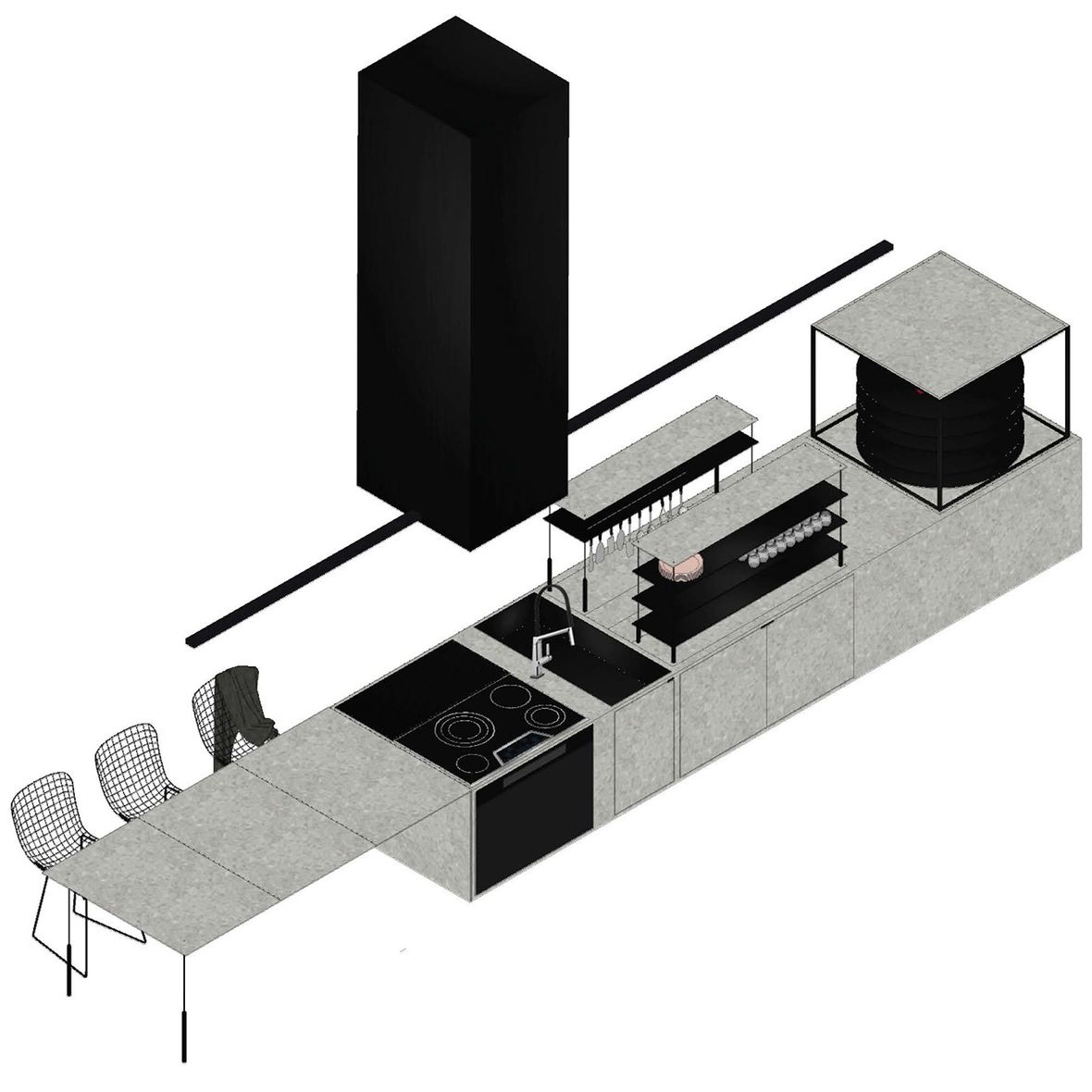 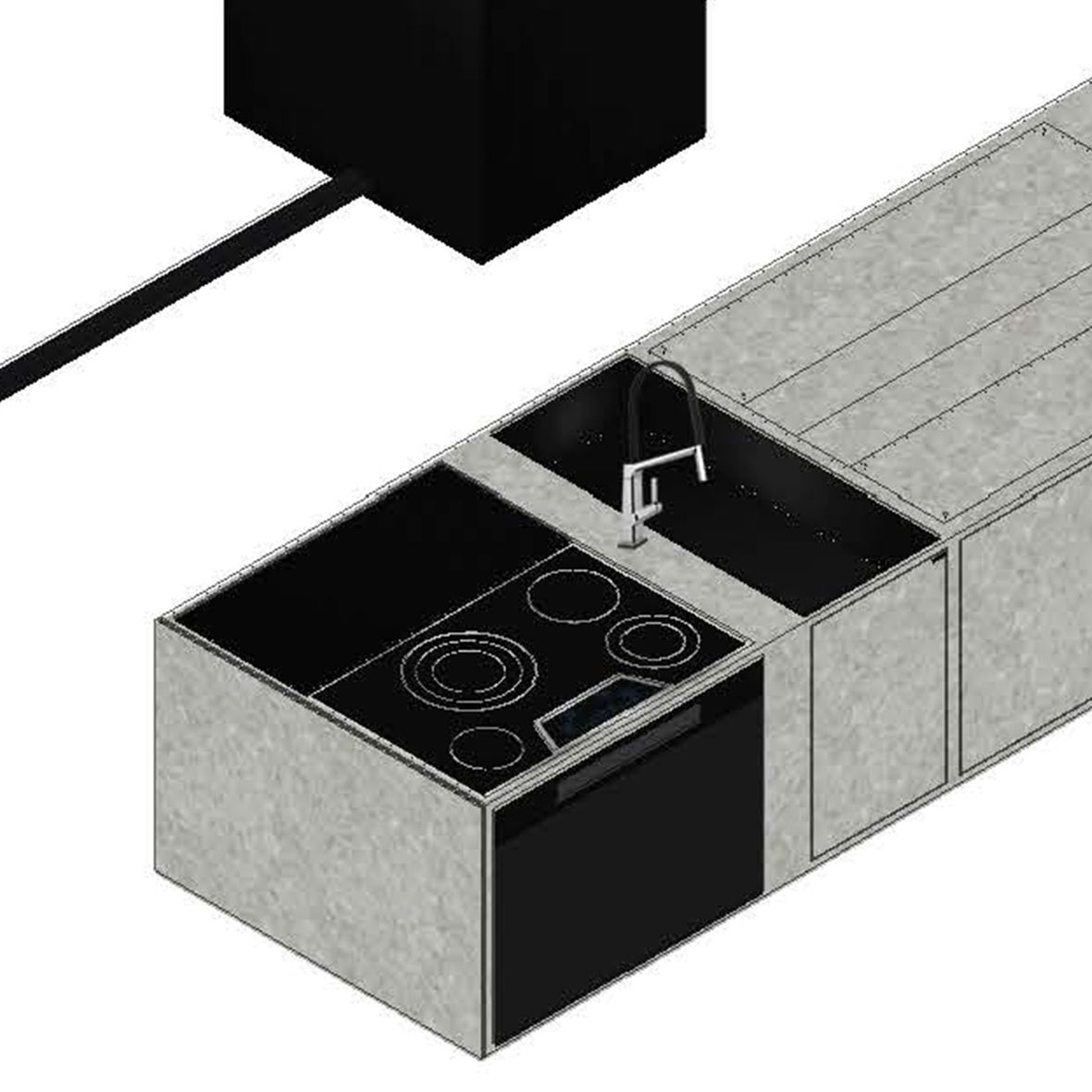 “For this challenge, I was inspired by the abstract art movement of the 20th century, specifically analytical cubism. Cubists challenged our conventional perception of art. They believed art could have multiple vantage points rather than a single perspective. Challenging perceptions of the typical kitchen, I designed one that would float in the center of a space, allowing the user to access it from all angles.

Inspired by the overlapping planes of cubist art, I designed a shelving storage system that emerges from within the countertop with the touch of button. Similar to the shelving, a circular, 360-degree rotating refrigerator reveals itself to create a user-friendly experience. Materials-wise, I chose a concrete-like countertop. I then mimicked the solid-black exposed hose of the faucet for the black powder-coated shelving, which is a hard contrast to the countertop when revealed. The monochromatic palette ties back to the purist palette of analytical cubism.”

“My kitchen was inspired by the de Stijl movement of the Netherlands in the early 20th century. I focused on precise geometric forms and raw materials in primary colors placed on a strong asymmetrical grid, and I aimed to establish tension and balance between positive and negative space. Each section of the kitchen is completely abstracted to its simplest form, and is further emphasized by its color: Blue for water, red for cooking, and yellow for storage. The faucet’s striking geometric design made it a natural choice as the single appliance sitting front and center.” 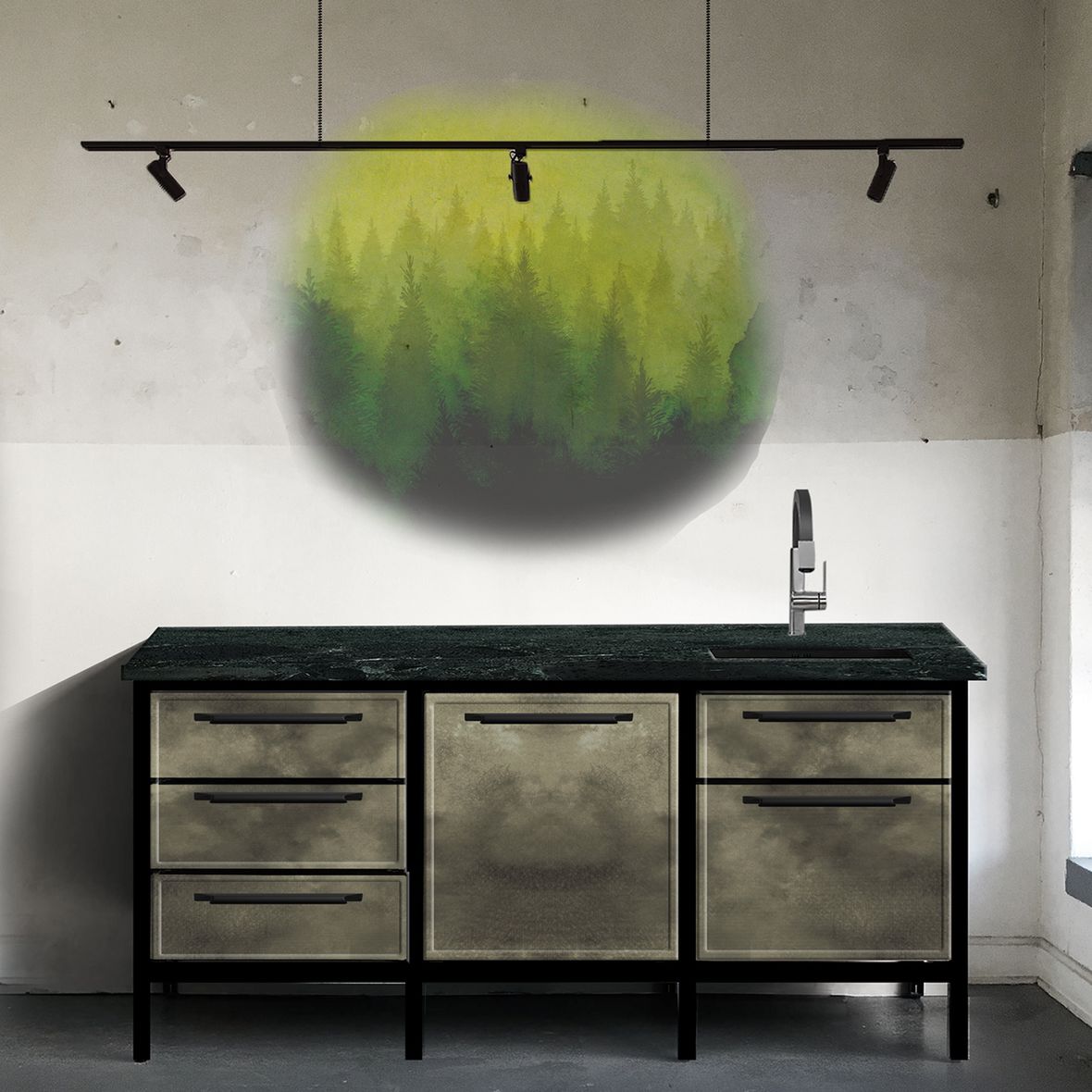 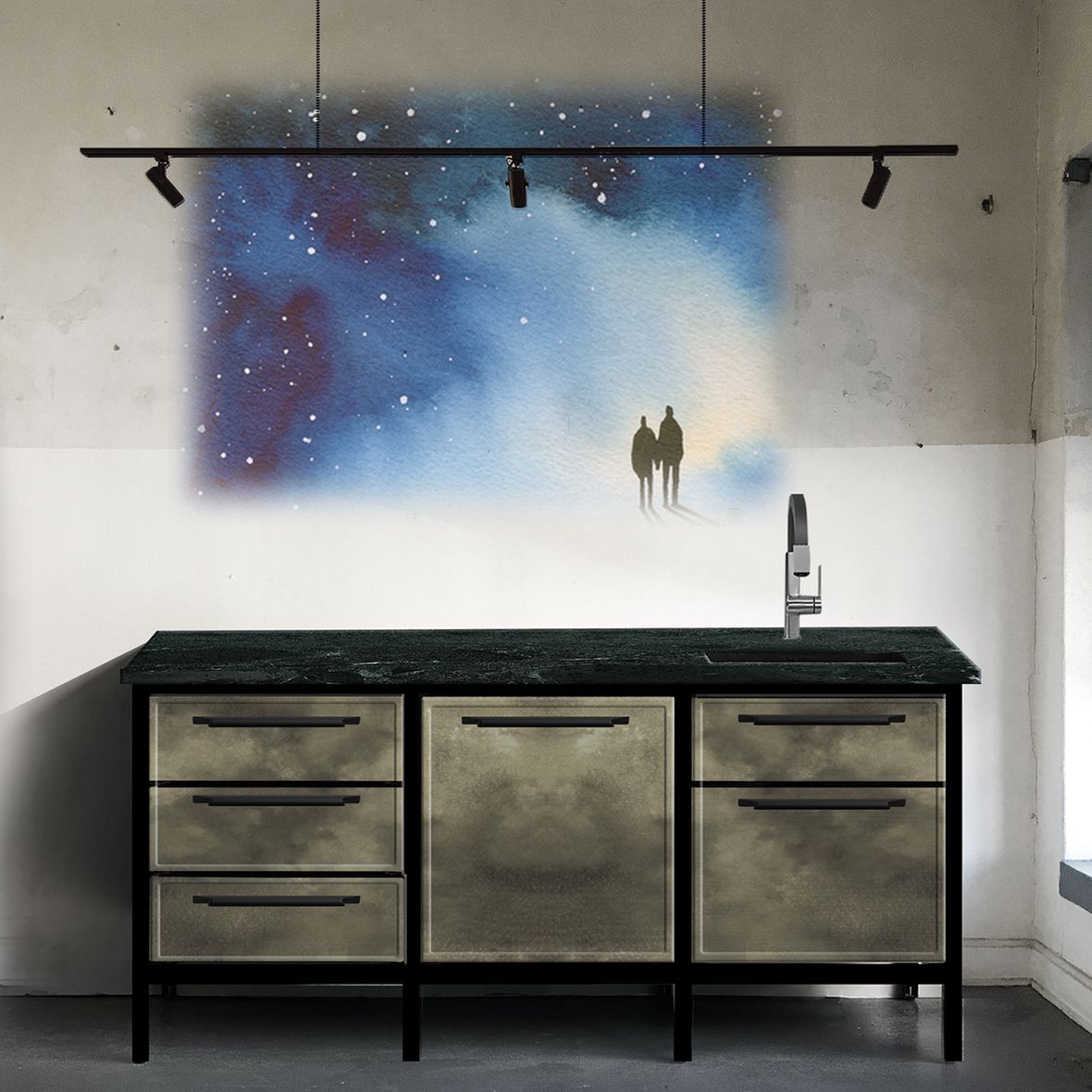 “When you walk into a space, it should be an immersive experience. The faucet is very sleek, which provided direction for my modern kitchen design, and it also led me to create a space that was inspired by water itself. Hence, the medium of art that I incorporated is watercolor. Because watercolor has a lot of variation in its execution and finish, the main element I was trying to convey was texture. I overlayed that visual texture onto the pine cabinetry. And since light is an important factor for identifying texture, I included a lot of natural light, as well as a light fixture that could project visuals onto the plaster walls.”

+Comments Leave a Comment
4 Futuristic Kitchens Inspired by Fine Art
power Yesterday at 8:53 p.m.
Evan Rachel Wood Says Marilyn Manson ‘Essentially Raped’ Her On Set In her new documentary, she said Manson penetrated her while filming a 2007 music video.
culture Yesterday at 8:41 p.m.
And Just Like That… We’re Being Threatened With A Season 2 Sources say those involved are “feeling good” about a possible return.
fashion Yesterday at 7:06 p.m.
Thierry Mugler, Fashion’s Greatest Showman The designer, who died Sunday, was force in ‘80s fashion. A new wave of celebrity fans and a museum retrospective have brought his influence back.
By Matthew Schneier
in memoriam Yesterday at 6:42 p.m.
13 Out of This World Thierry Mugler Looks From inventive silhouettes to theatrical productions, Mugler’s unique approach to glamour will be celebrated forever.
sorry to this man Yesterday at 6:05 p.m.
Doubt Taylor Swift’s Songwriting at Your Own Peril One cannot simply insult her skills.
euphoria Yesterday at 6:04 p.m.
11 Pieces You Can Shop From Euphoria Episode 3 Including Miu Miu, Reformation, Coperni, and By Far.
friendship Yesterday at 5:02 p.m.
Javier Bardem, Please Plan My Birthday Party Commitment is jumping out of a cake dressed as a Bond girl for Daniel Craig.
valentine's day Yesterday at 2:28 p.m.
The 16 New Sweethearts Phrases, Ranked The theme is “words of encouragement.” Gross.
culture Yesterday at 2:17 p.m.
Sometimes Violence Is the Answer All hail Ashtray.
celebrity couples Yesterday at 12:42 p.m.
Kanye West and Julia Fox’s Paris Fashion Week Dress-up Tour Featuring a pair of boots we’ve seen on Kim Kardashian West before.
conspiracies Yesterday at 12:38 p.m.
Why Do TV Characters Keep Having Peloton Heart Attacks? Billions has given us yet another instance of stationary bike-induced cardiac arrest.
self Yesterday at 10:00 a.m.
I Was a Therapist for Sex Offenders When I Realized: I Survived Larry Nassar On the anniversary of Nassar’s sentencing, one survivor reflects on the moment the truth hit her — and all the moments since.
in memoriam Yesterday at 9:41 a.m.
Thierry Mugler Has Died The iconic French fashion designer was 73.
self Yesterday at 8:00 a.m.
‘I May Be Bisexual,’ From Rachel Krantz’s Memoir, Open Writer Rachel Krantz investigates her own sexuality through indulging her partner’s fantasy.
how i get it done Yesterday at 7:00 a.m.
How White House Press Secretary Jen Psaki Gets It Done From advising the president to toaster waffles and Emily in Paris.
By Andrea González-Ramírez
astrology Jan. 23, 2022
Madame Clairevoyant: Horoscopes for the Week of January 24 Mars, Venus, and Mercury will all be in level-headed Capricorn, and Venus retrograde comes to an end.
By Claire Comstock-Gay
sex diaries Jan. 23, 2022
The Art Teacher Quarantining With a Fling Who Gave Her COVID This week’s sex diary.
celebrity Jan. 23, 2022
Bella Hadid Says She’s Not Drinking Alcohol Anymore Here’s why.
the de armas cut Jan. 23, 2022
Ana de Armas Was Edited Out of Yesterday, So Fans Are Suing Before you ask, this was not the work of the Ana de Armas Updates stan account.
power Jan. 23, 2022
New Zealand PM Jacinda Ardern Cancels Her Wedding Due to Omicron “I am no different to, dare I say it, thousands of other New Zealanders.”