Please note the story you’re reading was published more than a day ago. COVID-19 news and recommendations change fast: Read the latest here to stay up-to-date. We’ve lifted our paywall on all essential news and updates about the coronavirus.

The past few weeks have had a certain apocalyptic je ne sais quoi about them, and for many people this feeling came to a head Wednesday evening when, over the course of a few short hours, Donald Trump suspended travel to Europe, Tom Hanks tested positive for COVID-19, the NBA shut down, and Sarah Palin was unveiled on The Masked Singer. Also, some people sent impulsive texts to their exes.

One of these people was a 30-something writer in New York City named Alice. She typed, and then deleted, and then retyped a message to her ex-boyfriend. They’d broken up last summer after nearly a decade together, and she’d picked up the rest of her stuff from his apartment — her old apartment — earlier that week. They still communicated post-breakup, but things were mostly logistical and the relationship was, by all accounts, over. Yet over the last week or so, with a pandemic hovering in the background, they started trading friendly messages — mostly, though not entirely, about the news. And then, Wednesday night, she eventually just sent the text: Do you want to come over for dinner?

“There was something that felt like coming home, hanging out with him again. The feeling of something stable — it’s very appealing right now,” she said the morning after the dinner, which went well, and ended with them making plans for another. “When you’re in a ten-year relationship, stability is something you take for granted. And the past few days really, I wanted something that feels, I don’t know, homey.”

That this dystopian, the-world-is-burning feeling — and the actual rollout of policies that change how we live day-to-day — has led to a change in our desires is not surprising. Alice was one of a handful of people I spoke to who acknowledged that the events of the past few weeks had prompted them to reach out to an ex, or seemed to be the reason (or guise under which) an old flame had contacted them.

Of course, people reach out to their exes all the time, especially when faced with a personal tragedy or moment of distress; I remember my own (misguided) attempt to soothe my own fear and loneliness by reconnecting with my New York-based ex when I moved here four years ago. And in the present moment — one that increasingly appears to be ramping up to an international catastrophe — sending that text feels both urgent, and like small potatoes: Shouldn’t you just check on them? What’s a friendly text at the end of the world? Pair that logic with a little too much time spent holed up at home alone, a bit of horny weather, and soon you’re asking yourself, Why the hell not?

There’s also, as Brock Coylar observed in the Cut on Friday morning, the sense of nihilism that the spread of COVID-19 has caused in the Gen-Z crowd (teenagers and early 20-somethings) who, as Coylar notes, largely don’t remember 9/11 or the financial crisis. The spread of the virus — coupled with the low chance of fatal contraction (for young people, at least) — has resulted in “a prideful sense of invincibility” that has spurred a kind of mid-pandemic hedonism.

“I think the sense of imminent doom is making people reckless; long-term consequences don’t apply,” my friend Kayla texted me yesterday. She’d just shared an inscrutable message from a girl she’d met freshman year of college that began: Classes are canceled because of the coronavirus, which made me think of all the times I canceled on you … 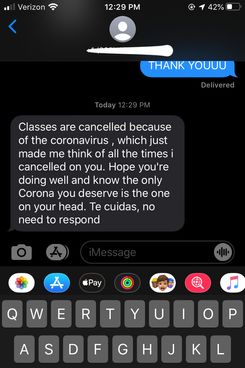 Kayla sent me another screenshot, this one a voice note from a college hookup saying that he missed her, followed by a text about the transmission rate of COVID-19. “It’s mostly random guys from the past commiserating over the impending doom, and cracking dark jokes to ease the tension,” she explained.

Sameh, an investment analyst in his early 20s, told me an old girlfriend had called him out of the blue this week. “She was saying all of this mushy, mushy stuff about how she cares about me; how she feels very lost but wants to focus on herself right now, because of everything that’s going on.” He added that he’s also had more free hours than usual, leading to more time spent reaching out to “old flings” himself. As quarantine and social-distancing measures continue, he anticipates he’ll continue doing this, if only out of boredom and loneliness. A screenshotted text shared by writer Sara David on Twitter earlier this week seemed to speak to Sameh’s experience:

ugh it’s starting.......looks like quarantine means we’re gonna wake up to a lot of “thinking abt u” texts. brace yourselves and put your phone on silent after midnight!! pic.twitter.com/bkHlDFaYVh

But Candice, another young woman in Sameh’s same age cohort, told me she felt compelled to reach out to her ex due to her personal feeling of panic. “It feels like the end of the world,” she said, explaining that she’d had reservations about messaging him, but considering “everything that’s going on,” she just went for it. She also reached out to a crush that she’d previously avoided for the same reason. “It’s the end times,” she said (joking, but not really). “I think we should live with no regrets.”

Perhaps, for people who live mostly stable lives, big catastrophes like a pandemic leave you with no choice but to reexamine your priorities, the same way personal tragedies do, like the death of someone close to you. I spoke with a magazine editor, Agnes, who is now in her 40s. Her story started like Alice’s: When she was in her 20s, she’d broken up with her boyfriend, moved out of their apartment, and started seeing other people. “I remember being like, I’m 25! The world is ahead of me. I’m going to have so many sexual partners! I’m going to have so many boyfriends!” she recalled on the phone.

And then, a few months after her breakup, 9/11 happened. “There was this sense of the world contracting a little bit,” she says, “it was a galvanizing thing. This intense moment where everybody wanted to feel secure and wanted to eliminate the other uncertainties of the moment.” She reached out to her ex, and they started hanging out again and eventually dating. Today, they’re married with kids.

“Something about [9/11] made us get back together,” she said, adding that she knew a lot of people, at the time, who did the same thing. “It was a very, very scary time. Everybody was freaking out and it just felt like the one person I really wanted to be around [was him.] And I thought to myself: If the world was actually on fire — which was what it felt like — who do you want to be around?”

Some names have been changed.

By submitting your email, you agree to our Terms and Privacy Notice and to receive email correspondence from us.

+Comments Leave a Comment
You Can Text Your Ex Now