As a pastry chef, Natasha Pickowicz is used to striving for consistency and flawless execution. It’s what ensured that any patron of Flora Bar — the stylish Upper East Side restaurant where she worked until recently as executive pastry chef — could try one of her signature black cardamom-laced sticky buns, and then, when they had a craving months later, come back and have the same transcendent experience. “That’s a magical, ineffable thing that actually is really hard to create,” she says. 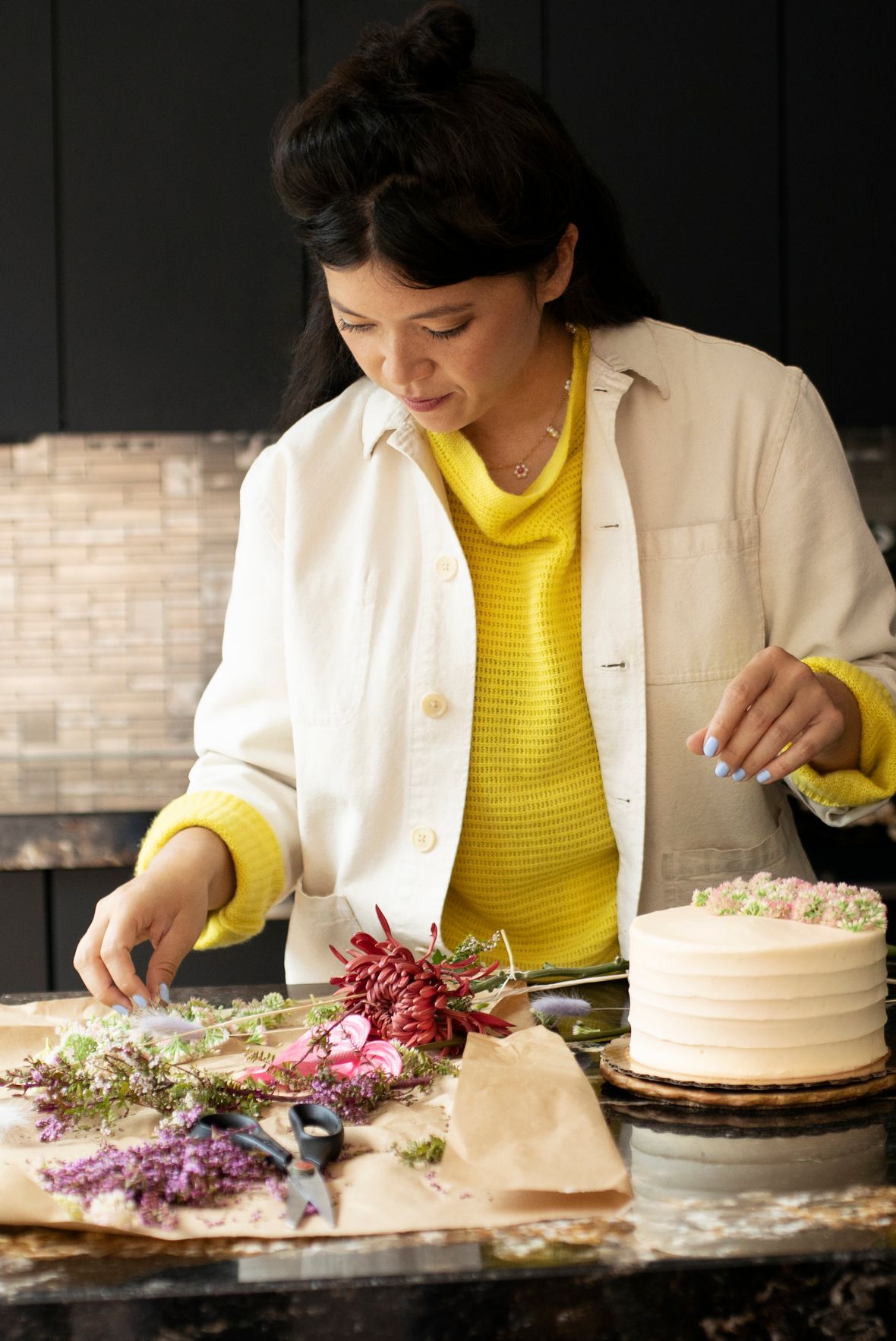 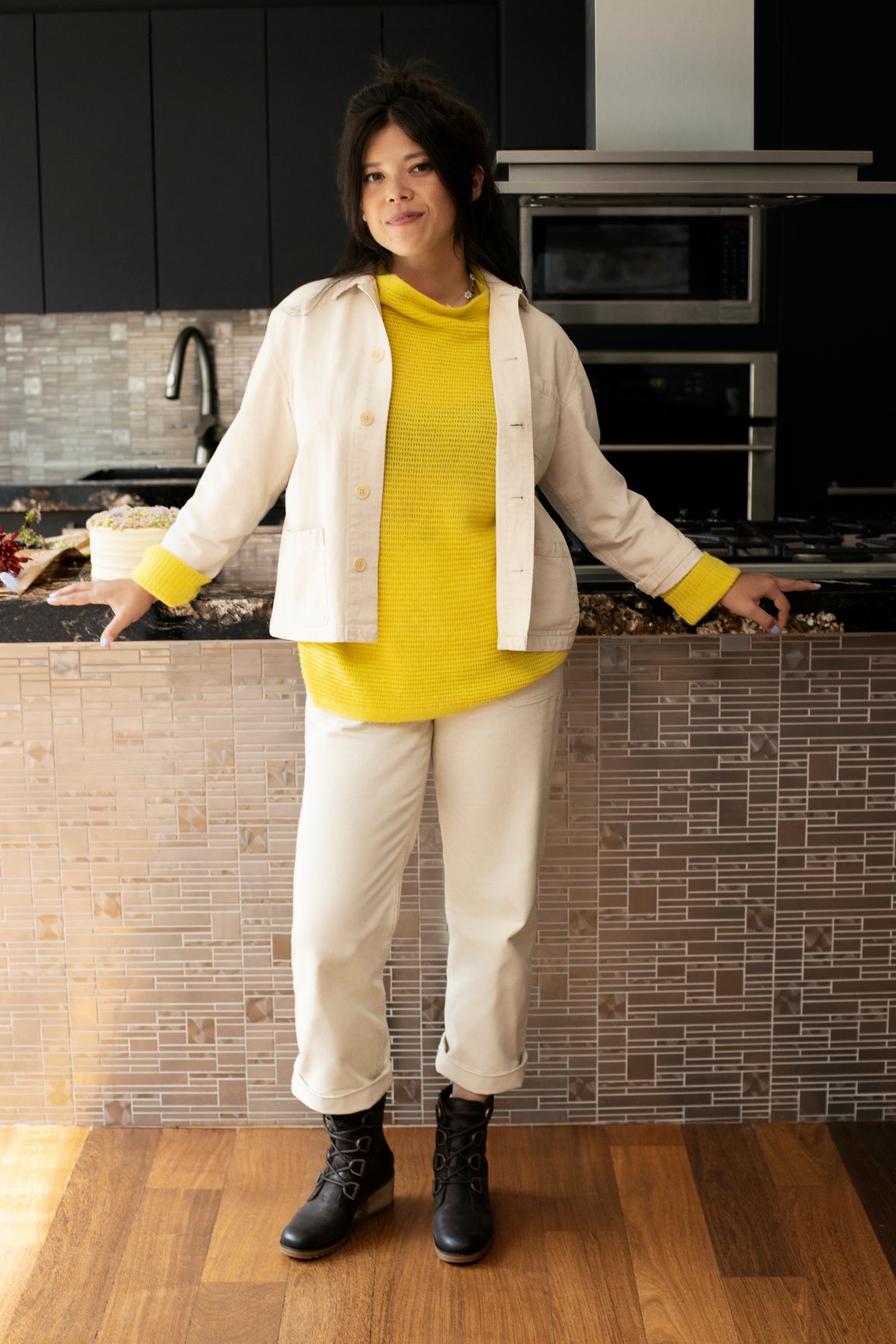 In the past few months, though, she — along with the rest of New York’s restaurant industry — has had to throw her well-established routines out the window. Following layoffs at Flora Bar and its sister establishment, Café Altro Paradiso, Pickowicz has found ingenious ways of channeling her talents, while raising money and awareness for local food-justice organizations via pop-up events such as Never Ending Taste at Superiority Burger in the East Village. Next, she’s taking the concept on the road to the West Coast as she visits family in California. She’s also hard at work on Bake Sale Project, an online network she’s co-organizing to provide resources, strategies, and contacts for using bake sales as a form of grassroots activism.

Like Pickowicz, creatives across NYC represent a certain kind of unstoppable individual — one that’s determined to support the industries that make New York tick, and rising to meet broader community needs in the wake of a year that upended our lives overnight. To celebrate the spirit of vibrance and renewal, The Cut has partnered with SOREL to bring you the stories of six unstoppable individuals from New York City’s creative communities. In the weeks ahead, we’ll take a walk with them and explore their work, values, resilience, and all the ways their style helps propel them forward. 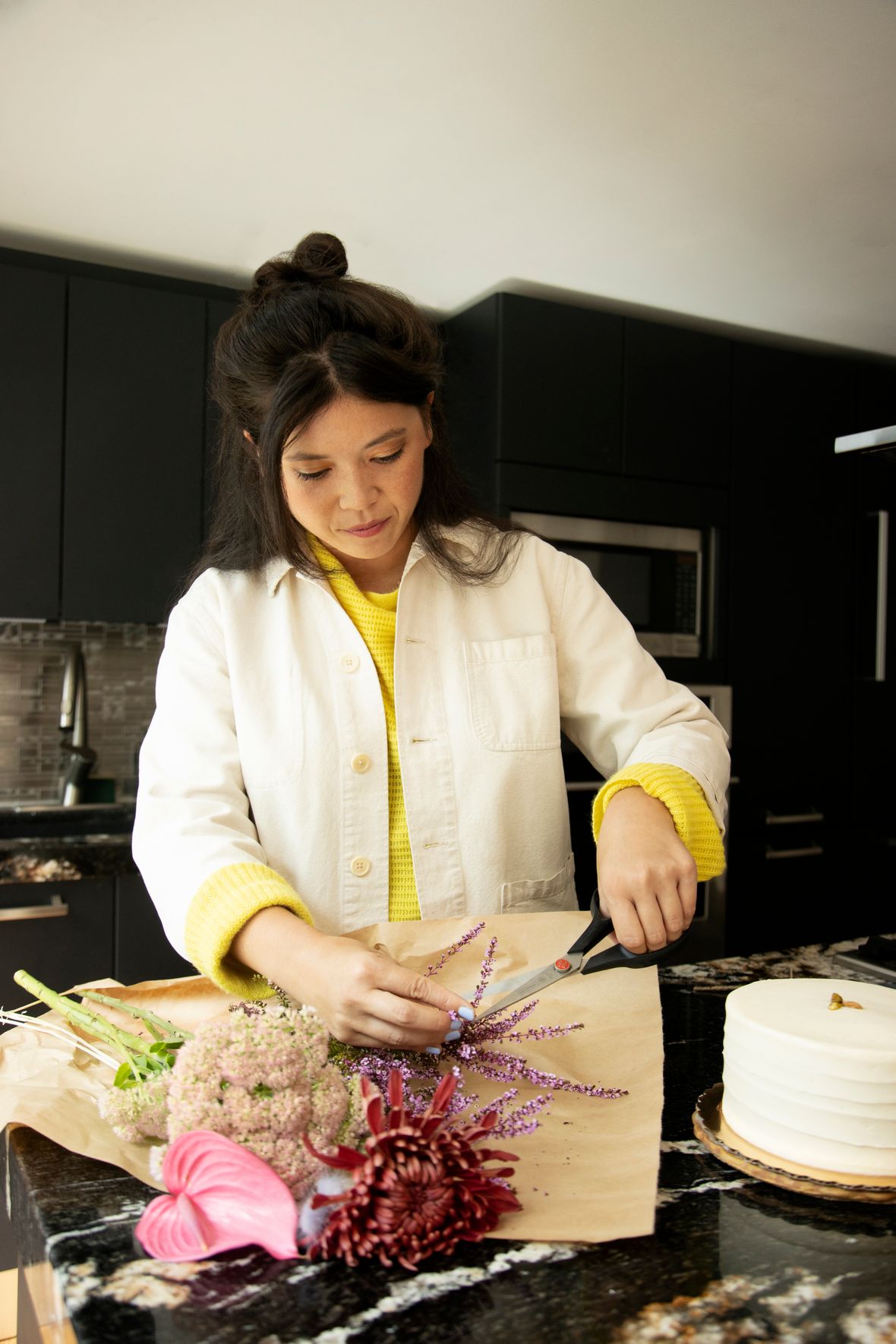 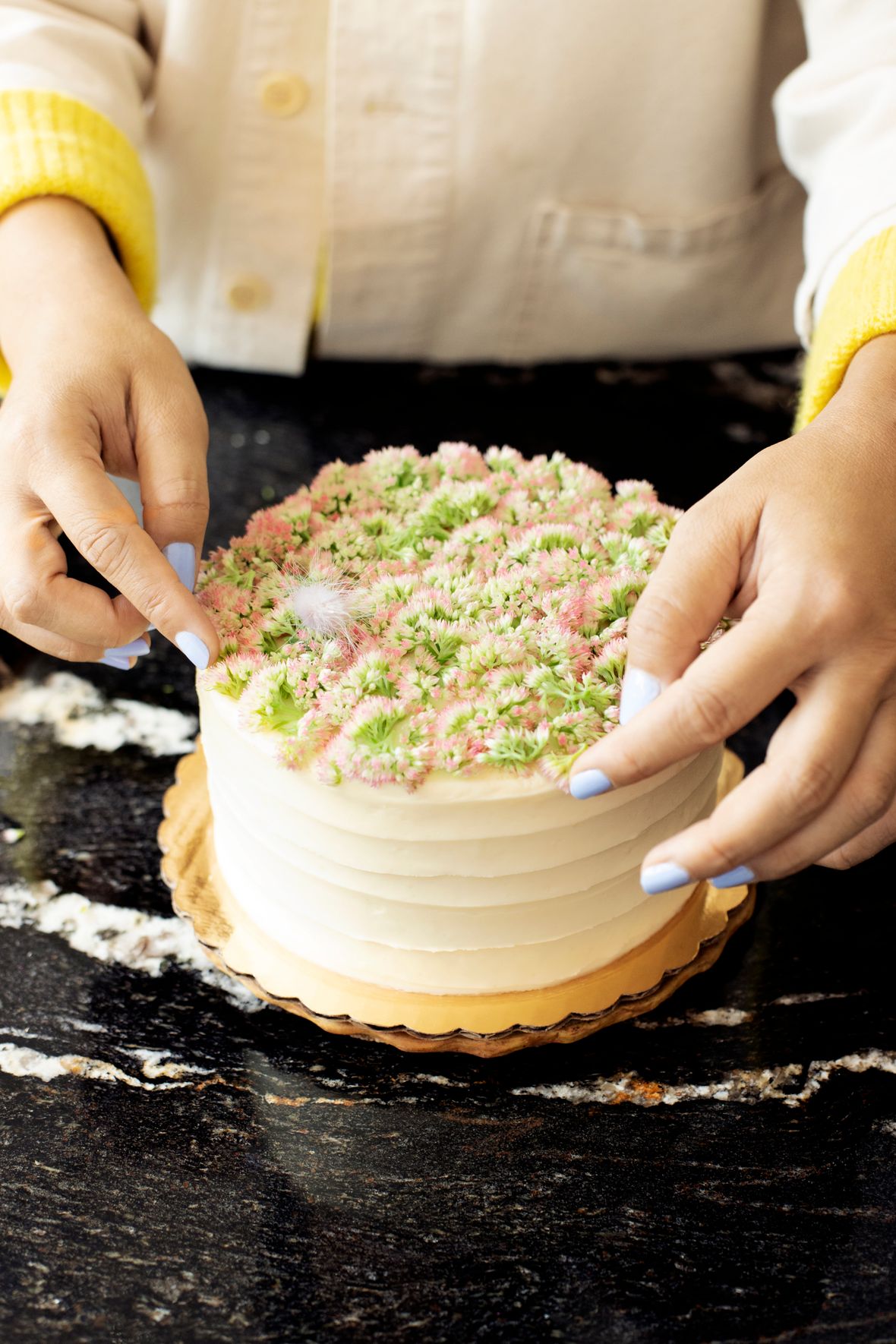 On why pop-ups feel so relevant right now:
“I think that a pop-up is a response to the nowness of this moment. This idea of being present and working with a little bit of urgency — like, let’s just do something right now because we don’t know what next month is going to look like. Seeing people making things happen during this time and actively engaging with their neighborhood has been really inspiring for me.

If you’re coming from a certain kind of fine dining restaurant background, the biggest concern or priority is being able to test something over and over again until a guest can have it and have their mind blown. What you’re seeing with pop-ups is the complete opposite. You’re bereft of a venue, physical space, the ingredients you’re used to having access to, the team, equipment. Literally everything stripped away, and all that’s left is a creative impulse and a desire to serve people.”

What I’m really fascinated by is all of these smaller, more grassroots things that are springing up in the margins

On how New York City’s restaurant community is springing back into action:
“What I’m really fascinated by is all of these smaller, more grassroots things that are springing up in the margins… these scrappy projects that are coming out of a lack rather than a surplus.

Maybe they’ll never open a $6 million restaurant in Tribeca for rich people who live downtown to go eat at, but maybe they’ve figured out another way to create a business plan for themselves, where they’re serving their community, their neighborhood. Maybe they’re also donating proceeds to organizations and nonprofits. And maybe they’re hiring in a more responsible, equitable way, more inclusive approach towards taking care of their staff.” 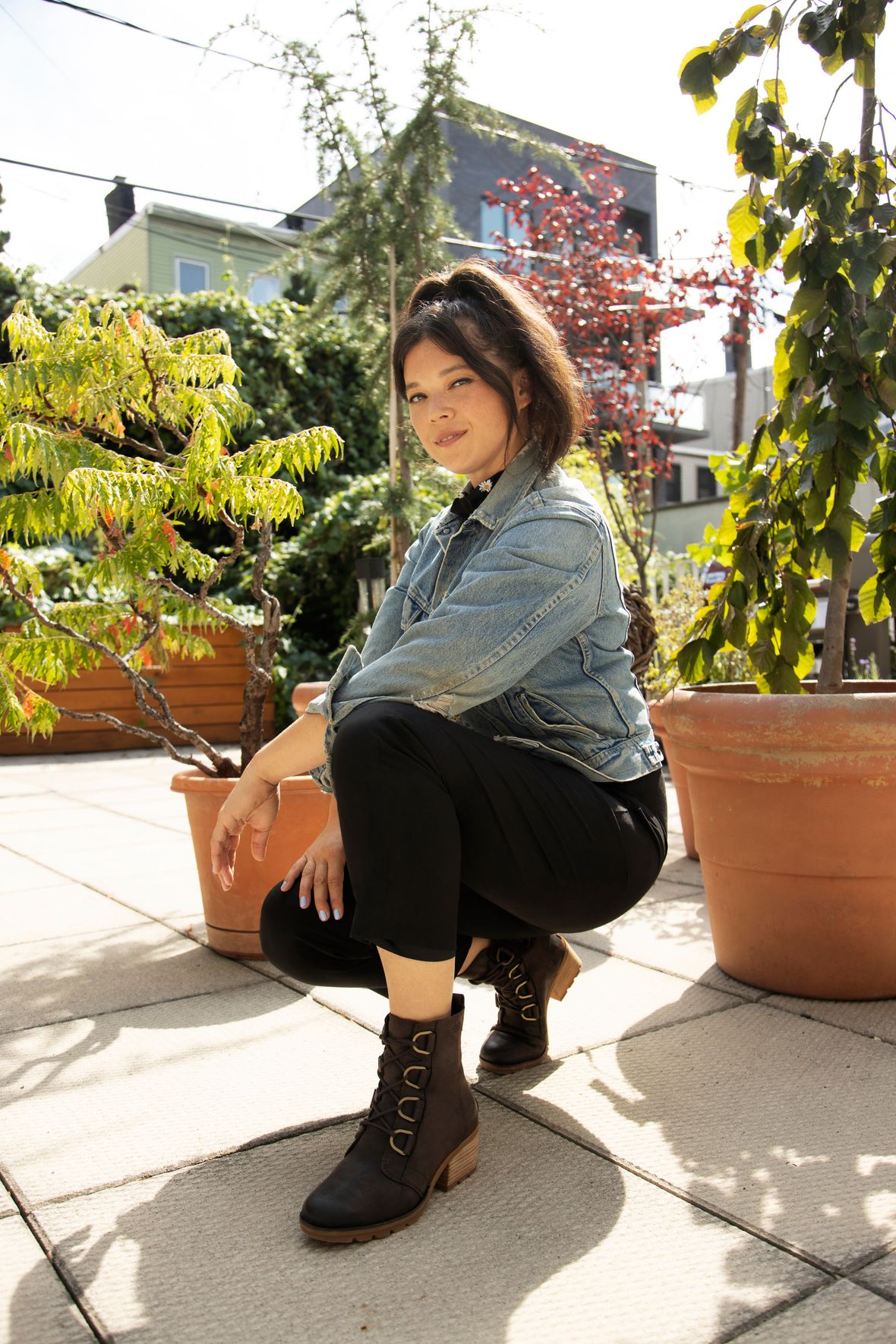 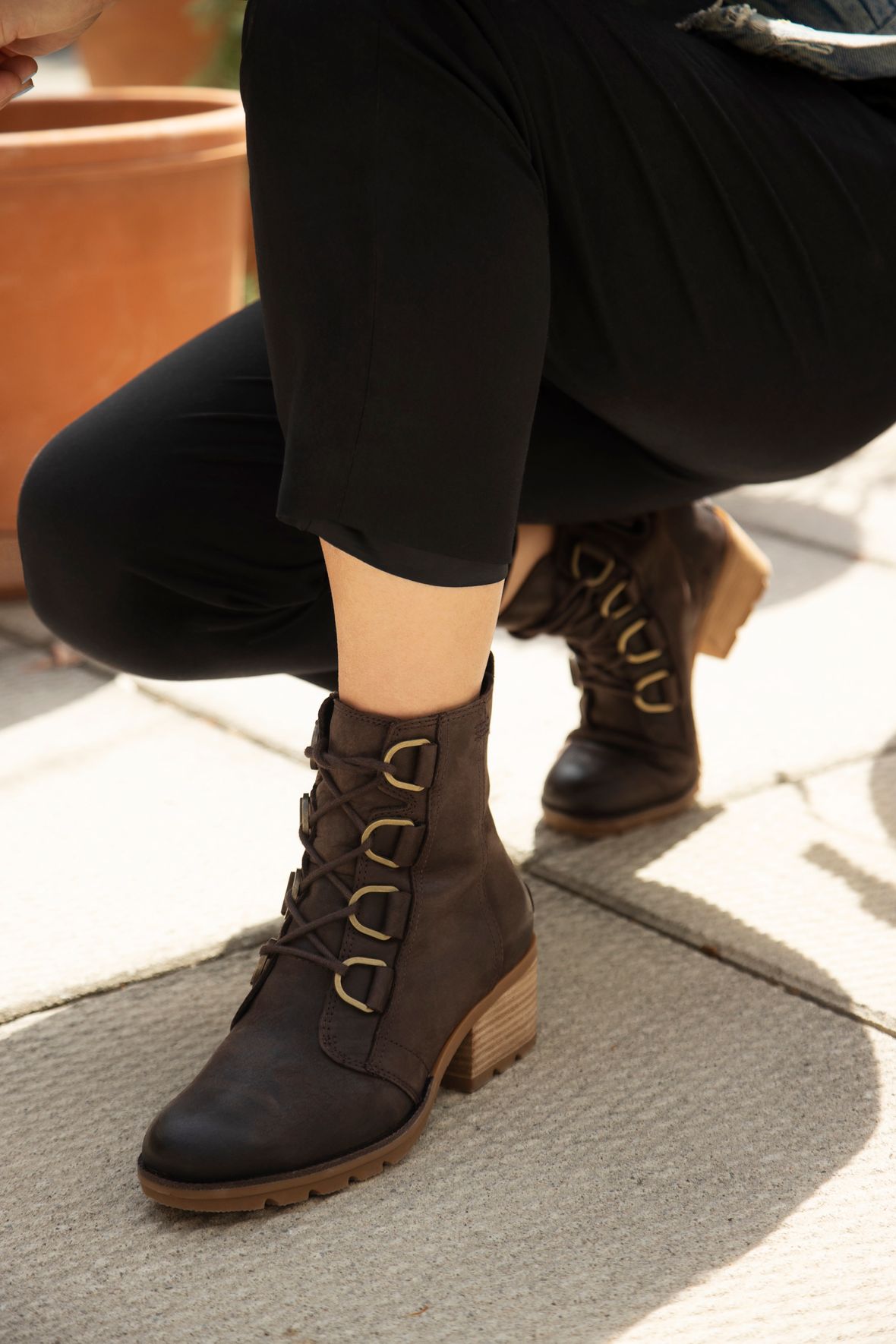 On reconnecting with her neighborhood:
“I go on insane walks. I think that’s one of the most special things about New York City, is that the neighborhoods change so quickly, and you can cover so much ground and see so much. That was always something I really loved when I was commuting and working in the city, being able to walk. But since the pandemic, wow, the walks have taken on a new level of meaning. I live in Greenpoint, so I like to walk up and around Queens. I was going up to Sunnyside and Woodside a lot. But yesterday I actually walked up to Elm Park and Rego Park, and was just walking around Roosevelt Boulevard, going up and exploring parks up around there. I went to Astoria Park last week.”

On dressing for comfort — and long days on her feet:
“My style has always been very utilitarian. Pre-COVID, I was on my feet working every day: standing in front of a hot oven, a hot gas range, cooking things, steam in my face, getting dirty, traveling on the train. I definitely gravitate towards very easy-to-wear structured, comfortable work clothes and boots every day.

I’m more intentional about thinking into the day and just wanting to be as comfortable as possible.

I go on these walks, and I have my fanny pack. And I think everyone is like this when they leave their house now. I’ve got my little pack that has hand sanitizer, back-up masks, a snack… I feel like when I have to go out into the world, I’m making this choice, so I feel like I have to be more prepared. I’m more intentional about thinking into the day and just wanting to be as comfortable as possible.

I get dressed at home. I’m not a ‘wear sweatpants at home’ kind of person. But the clothes that I am wearing are hyper-practical and super comfy. I own tons of hiking-style lace-up boots like the SOREL Cate Boot — if I go out on a five-hour walk, or if I’m going out and doing a pop-up and I’ll be away for 10 or 11 hours, or if I’m just going to a picnic, being comfortable in something that’s not too fancy is exactly the kind of thing that I’m going for.”

On having more fun with her style:
“That has been one of the fun things of losing my job and not going into work in a restaurant anymore, is that there are so many little rules about being in a kitchen that I would enforce and also hold myself accountable for. You could never wear nail polish because it would flake off into food that you were making. You would never wear hand jewelry or even that much neck jewelry because it could get caught in machinery. Wearing my hair down even, wearing my glasses… I would never wear glasses at work because they would fog up in the kitchen. Those have actually been really fun things to play around with as an expression of, for example, femininity, that you really couldn’t have in restaurants.”

This advertising content was produced in collaboration between Vox Creative and our sponsor, without involvement from Vox Media editorial staff.

+Comments Leave a Comment
The Pastry Chef Finding Creativity Amid Chaos
life after roe 7:01 p.m.
Overturning Roe Is Just The Beginning Conservatives are already floating a national abortion ban and the overthrow of other privacy-based rights.
self 6:36 p.m.
Eating Daily Harvest Lentil Crumbles Sent Them To The ER Daily Harvest customers describe the medical hell that followed eating French Lentil + Leek Crumbles.
abortion 6:00 p.m.
Celebrities, Activists, and Politicians React to the End of Roe The Supreme Court’s Dobbs decision has, as expected, overturned our constitutional right to abortion.
life after roe 5:30 p.m.
What to Know About Stocking Up on the Abortion Pill Even if you aren’t pregnant, some providers will let you buy the medication in advance.
life after roe 4:49 p.m.
God Help My Friendship With White Evangelicals After Dobbs Forced reproduction cannot mean anything other than slavery to Black women.
By Brittney Cooper
life after roe 3:58 p.m.
The Necessity of Hope Things are bad. They will get worse. But despair has never been an option.
By Rebecca Traister
life after roe 3:57 p.m.
With Roe Gone, This Abortion Clinic Is Running Out of Time “We were all just crying and angry. Then the phone rang and I had to make an appointment with a patient.”
life after roe 1:34 p.m.
How to Protest for Abortion Rights Following the SCOTUS Dobbs decision overturning Roe v. Wade, demonstrators are making their voices heard.
abortion 1:08 p.m.
The End of Abortion As We Knew It In a 6–3 decision, the Supreme Court has ruled to overturn Roe v. Wade.
By Irin Carmon
the internet 12:00 p.m.
Can a PDF Really Tell You If You’re Queer? Unpacking the complicated legacy — and history — of The Lesbian Masterdoc.
By Michelle Santiago Cortés
life after roe 11:16 a.m.
‘A Woman Has No Rights’: Read Liberals’ Supreme Court Abortion Dissent Justices Breyer, Sotomayor, and Kagan decried the abolition of Roe v. Wade in blistering language.
life after roe 10:55 a.m.
Find an Abortion An exhaustive guide to the clinics still open in each state, how to reach them, and the services they offer.
By the Cut
abortion 10:44 a.m.
Life After Roe Starts Now The Supreme Court decision ensures a health-care crisis that will ripple out across the country.
By Claire Lampen
power 10:30 a.m.
Donate to an Abortion Fund Right Now If you’re terrified about the overturning of Roe v. Wade, it’s the best thing you can do.
By Bridget Read and Claire Lampen
style 8:00 a.m.
The Rise of Fashion’s Tumblr Generation They found themselves, and each other, online.
keeping up with the royals Yesterday at 4:41 p.m.
Prince William and Kate Middleton’s Portrait Is Making Me Uncomfortable Sex and the City shoes included.
allegations Yesterday at 3:30 p.m.
All the Allegations Against Ezra Miller A man claims Miller is housing his young children and their mother in unsafe conditions.
good boys Yesterday at 2:24 p.m.
Congratulations to These Wrinkles Trumpet the bloodhound is the first of his breed to win Best in Show.
public health Yesterday at 2:07 p.m.
The FDA Just Changed Vape Life for Good R.I.P. Juul — for now.
power Yesterday at 1:15 p.m.
The Supreme Court Just Dealt a Giant Blow to Gun-Control Laws One justice even felt it necessary to note that the New York law at the center of the case didn’t stop the gunman in the Buffalo mass shooting.