Untitled, 1981, by Linder. Photo: Courtesy of the artist and Stuart Shave I Modern Art, London

Opening today in Liverpool, the touring art exhibition “Coming Out: Sexuality, Gender and Identity” has a timely debut — it coincides with the 50th anniversary of the U.K.’s Sexual Offenses Act, which partially decriminalized male homosexual encounters in both Britain and Wales in 1967. To mark the occasion, the Walker Art Gallery is hosting the U.K.’s largest exhibition of contemporary LGBT art, featuring artists who have explored gender and sexuality in their work since 1967, including David Hockney and Steve McQueen.

The artworks range from traditional photography to pop-art-inspired collages, audio installations, and “Nail Transphobia” manicures — a nail-art campaign that hosts pop-up salons in public spaces, welcoming people to meet trans people and learn about their experiences. In one series in the exhibition, English artist Linder created a series of untitled collages in the style of Dadaism, a movement of anti-art artists who rejected aesthetics of modern capitalism in the early 20th century. Like the Dada artists, Linder favored avant-garde media like collages, sound media, and poetry. Her portrait Untitled (1981) draws the viewer’s eye to a pop of red on her subject’s lips, contrasting with the black-and-white image, with kitchen utensils obscuring the eyes.

Other works include the self-portrait Divine (1991) by Sarah Lucas, from a series of confrontational photographs. Wearing blue jeans and a leather jacket, she sits on a marble staircase with her legs spread apart and extended out in front of her, nodding to the female anatomy, which she constantly challenges in her work.

Click ahead to see more art from the exhibition. “Coming Out: Sexuality, Gender and Identity” is on view at the Walker Art Gallery in Liverpool until November 5. The show’s next stop is the Birmingham Museum and Art Gallery in December 2017. 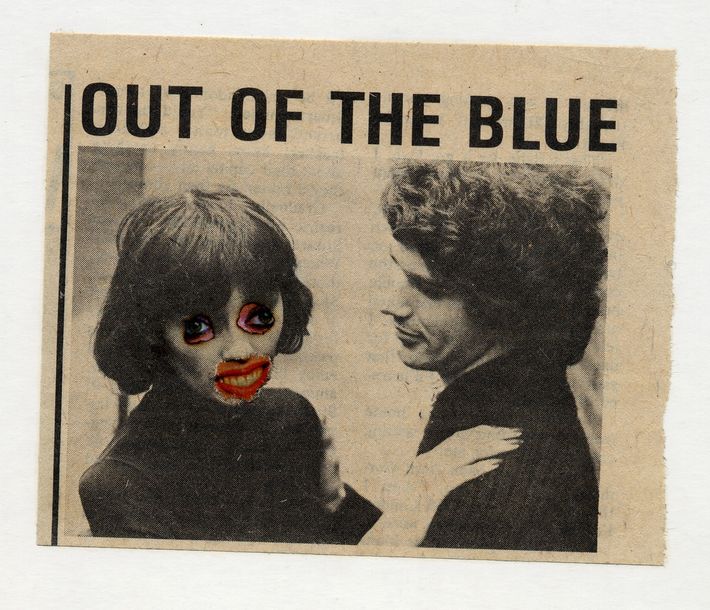 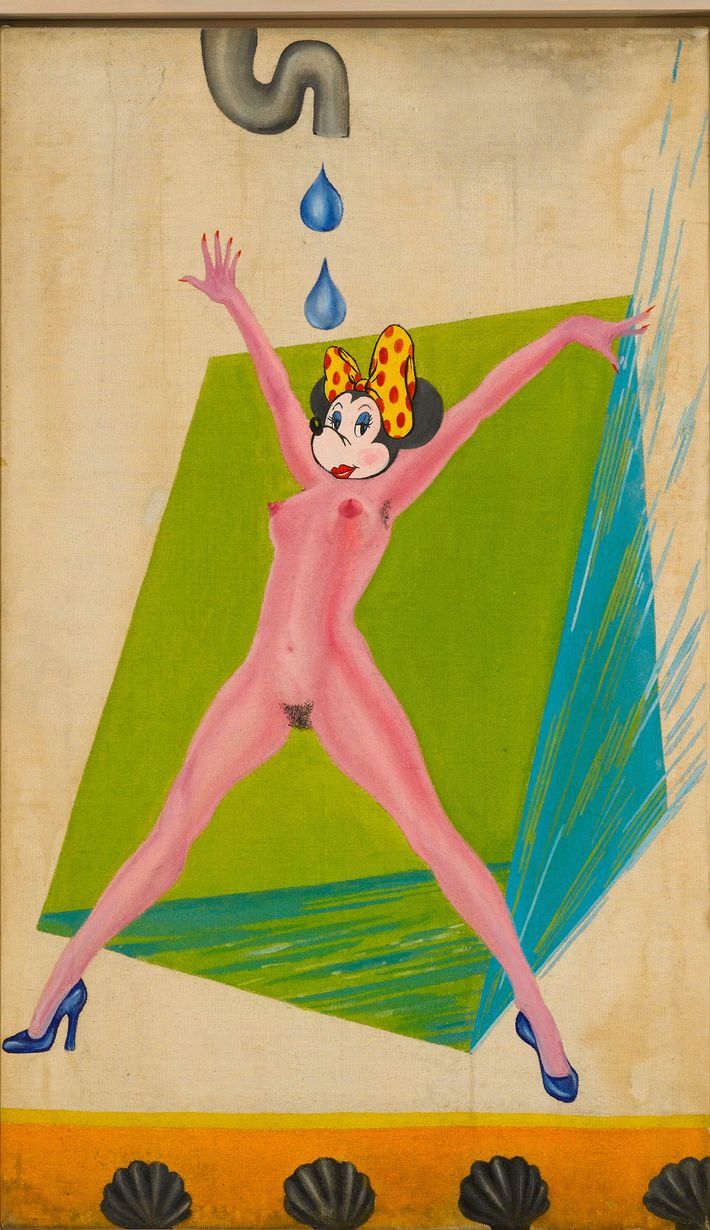 Women of the World Unite, You Have Nothing to Lose but Cheese Cake, 1969, Margaret Harrison. 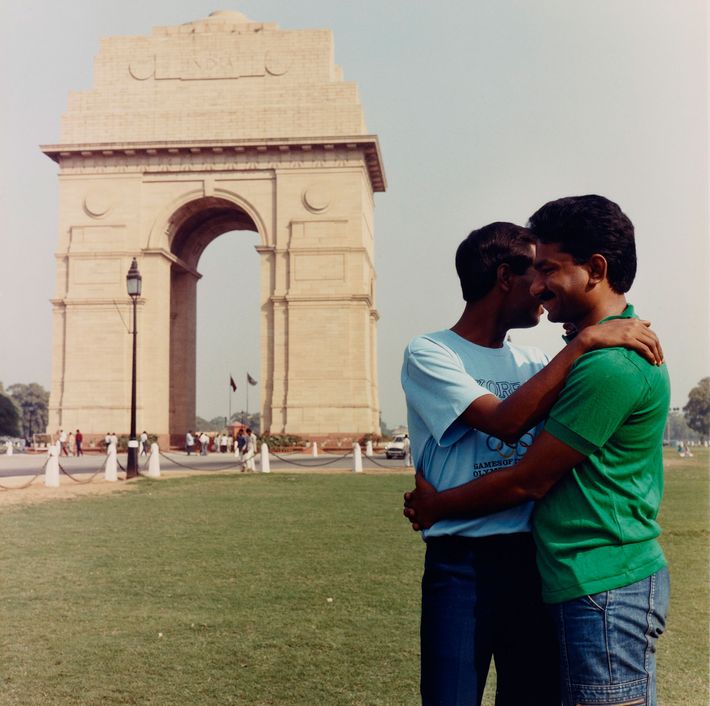 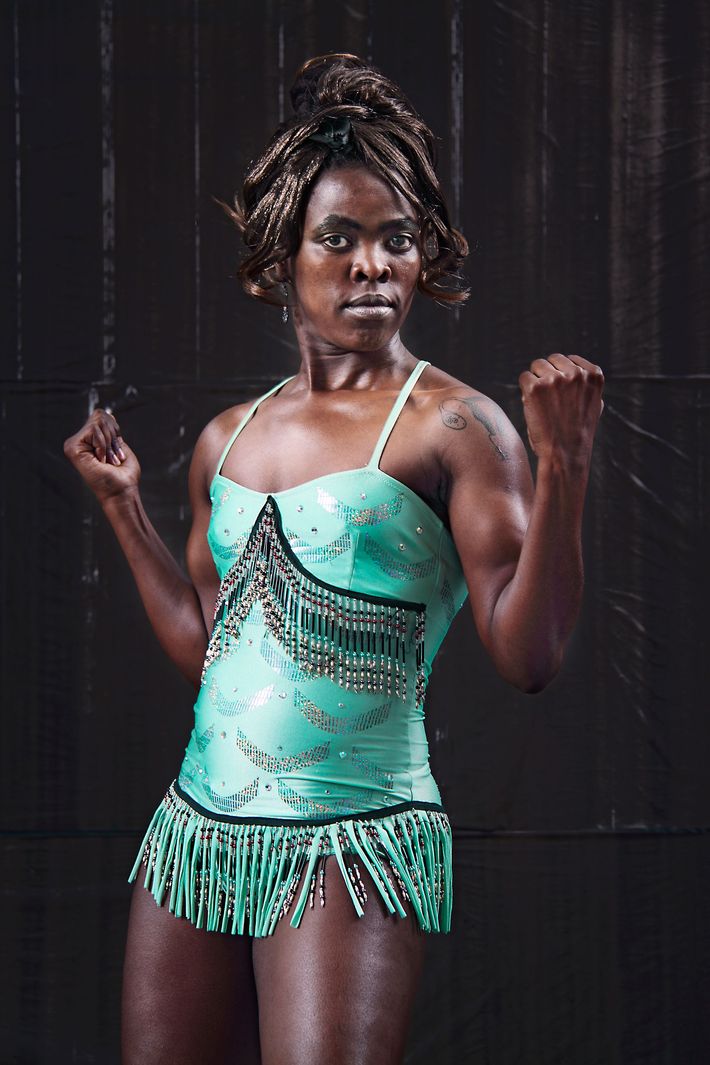 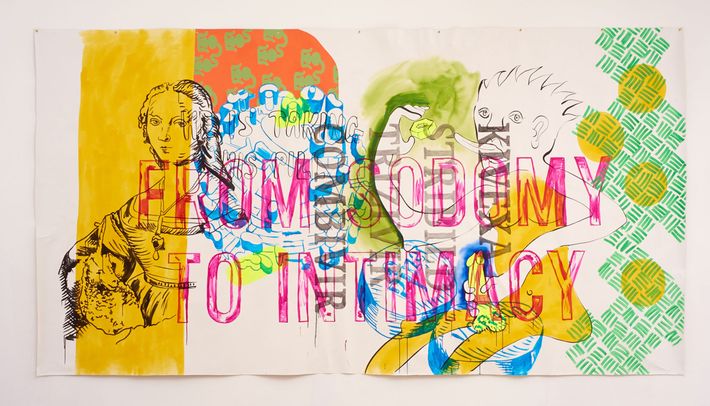 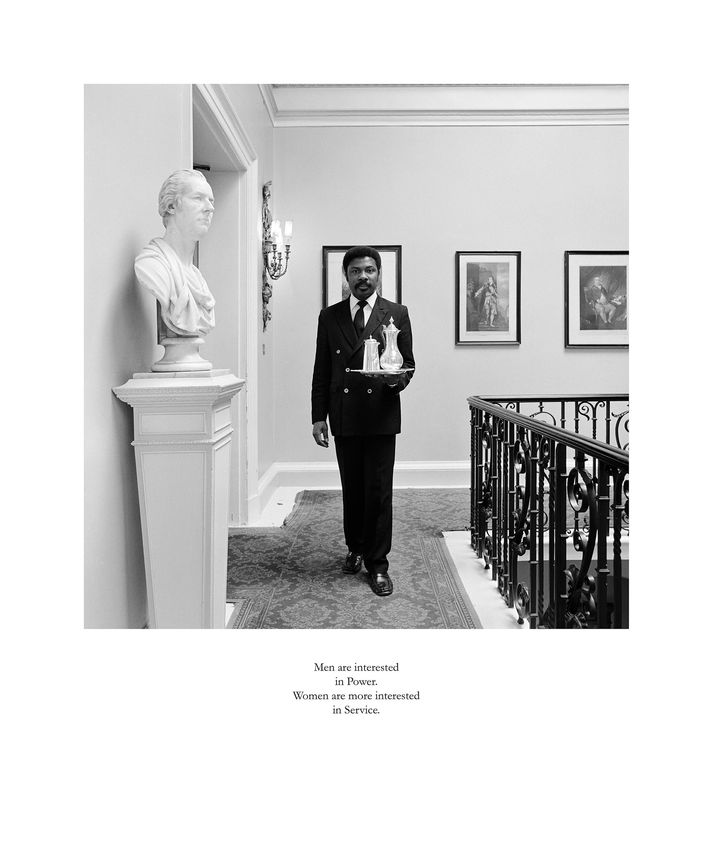 encounter 8:00 a.m.
The Hostess Who Kept Their Secret Grace Faison — the 97-year-old Brooklyn Heights fixture — opens up about secretly housing women seeking illegal abortions in the late ’60s.
By Eliza Gray
uvalde Yesterday at 9:04 p.m.
What We Know About the Police Response to the Uvalde Shooting Rep. Joaquin Castro has asked the FBI to investigate the police response to the school shooting.
lawsuits Yesterday at 6:30 p.m.
Amber Heard Says Her Defamation Trial Is ‘Humiliating’ and ‘Painful’ On the last day of testimony, Heard again denied claims from Team Depp that she lied and falsified evidence.
what we know Yesterday at 6:30 p.m.
Texas School Shooting Investigation Descends Into a Mess Officials give contradictory statements and parents say they were ignored and arrested trying to save their children.
uvalde Yesterday at 6:27 p.m.
‘As Teachers, We’re Expected to Put Our Lives on the Line’ An educator near Uvalde feels the weight of the Texas school shooting.
in her shoes podcast Yesterday at 6:17 p.m.
The Slippery Slope Ahead As Roe v. Wade Is Challenged  New York’s Rebecca Traister on what’s possible in the fight for abortion rights.
By the Cut
gone sale-ing Yesterday at 6:14 p.m.
Let the Cut Be Your Personal Shopper for Memorial Day Deals We rounded up the best deals from Everlane, Nordstrom, Outdoor Voices, and more.
gun control Yesterday at 5:45 p.m.
The NRA Will Still Hold Its Conference in Texas This Weekend Ironically, attendees will not be allowed to bring guns to the event.
power Yesterday at 5:31 p.m.
Amber Heard Says She Gets ‘Thousands’ of Death Threats a Day “I am harassed, humiliated, threatened every single day, even just walking into this courtroom,” she testified as Heard v. Depp wraps up.
action item Yesterday at 4:45 p.m.
How to Help the Uvalde Community From supporting Robb Elementary School families to pressing for gun-control legislation.
mental health Yesterday at 3:00 p.m.
Get Your Toxic Positivity Out of My Face Increase your tolerance for difficult feelings already.
power Yesterday at 2:44 p.m.
Kevin Spacey Has Been Charged With Sexual Assault in the U.K. The alleged incidents took place between 2005 and 2013.
what we know Yesterday at 1:20 p.m.
These Are the Names of the Uvalde School-Shooting Victims Nineteen kids and two teachers are dead after a gunman opened fire on a Texas elementary school on Tuesday.
uvalde Yesterday at 12:50 p.m.
“It’s One of the Biggest Fears of My Life” After the Uvalde shooting, a Columbine survivor dreads sending her daughter to preschool this fall.
power Yesterday at 11:47 a.m.
States Are Scrambling to Restrict Abortion Access With the Supreme Court expected to rewrite abortion rights, conservative states are advancing increasingly extreme bans.
life after roe Yesterday at 11:12 a.m.
10 Women on Getting an Abortion in the End Days of Roe “It felt like an insult to have to read that my fetus is the size of corn.”
uvalde Yesterday at 10:00 a.m.
‘Who Are the Bad Guys?’ It’s the question my children asked. My answer: the moral cowards who slobber and grovel over money from the gun lobby.
By Kathryn Jezer-Morton
sports! Yesterday at 8:00 a.m.
This Advice from Elite Runners Will Inspire Even Non-Runners Running advice for your entire life.
style Yesterday at 8:00 a.m.
Hey Fashion Friend: I Need Summer Sandals That Won’t Give Me Blisters Hopefully these 18 pairs won’t destroy your feet.
By Emilia Petrarca
books Yesterday at 8:00 a.m.
The Sad Young Literary Man Is Now a Middle-Aged Dad Keith Gessen wrote a memoir about family life. His wife, Emily Gould, is mostly okay with that.
By Elizabeth Weil
More Stories